If you’re a 90s kid like me, or one who fell in love with basketball during the 90s,  you’re probably missing the golden age of NBA.

You’re probably also sitting on a huge number of 90s NBA cards and wondering if they’re worth anything.

Well, in this article, we’re going to see what 90s Basketball cards are worth money today.

Important Information: The Sport Card Market is incredibly volitile and fluctuates a lot. If I was to give price ranges of cards and players, I’d almost have to update this article every day to make sure prices are current and on trend. So, I won’t do that. However, we’ll look at a few tried and tested strategies for collecting with 90s cards.

What 90s Basketball Cards are Worth Money: The Things to Look Our For

Before you head up to your attic and see if you’ve still got those boxes of NBA cards in a shoebox somewhere, you need to know that with cards, old doesn’t always mean rare or valuable.

This is espescially true with cards from the 90s. This is due to something many call the “Junk Wax” era.

Basically, cards were over-printed to meet rising demands when cards became popular. That means there were far too many cards printed, and the prices remain low over time.

With that in mind though, here’s a few things to look for when seeing what 90s NBA cards are worth money.

Obviosuly, when it comes to sports cards, the best players sell well. People are more likely to collect the best players – and it’s the 90s stars that many collectors had on their walls growing up.

So, when looking through your old cards, you need to make sure you’re on the hunt for the best players of the 90s.

If you’re not working with cards of the very best players from that era, you’ll struggle to find buyers for your cards.

For example, look at this Michael Jordan card from a 1990 SkyBox (that set holds a special place in my heart – they’re just so goddam pretty).

This card isn’t really anything too special besides the fact it’s Michael Jordan and PSA10 rated (more on that later), and it’s still selling for nearly $200! Not bad considering…

Like every sport and every era, rookie cards are worth the most money.

Sure, that MJ card above was a decent price. But if you really want to get into valuable cards, you need to look at a player’s rookie year.

Let’s say a guy plays in the league for over 10 years. That means that they’ll have over 10 sets of cards however, only one of those sets will ever be their rookie year.

That’s why rookie sets are so valuable, there is a scarcity factor.

Check out these 1996 rookie cards for Kobe and Iverson. Both cards are still worth a whole lot for something you could potentially find in an old shoe box somewhere. 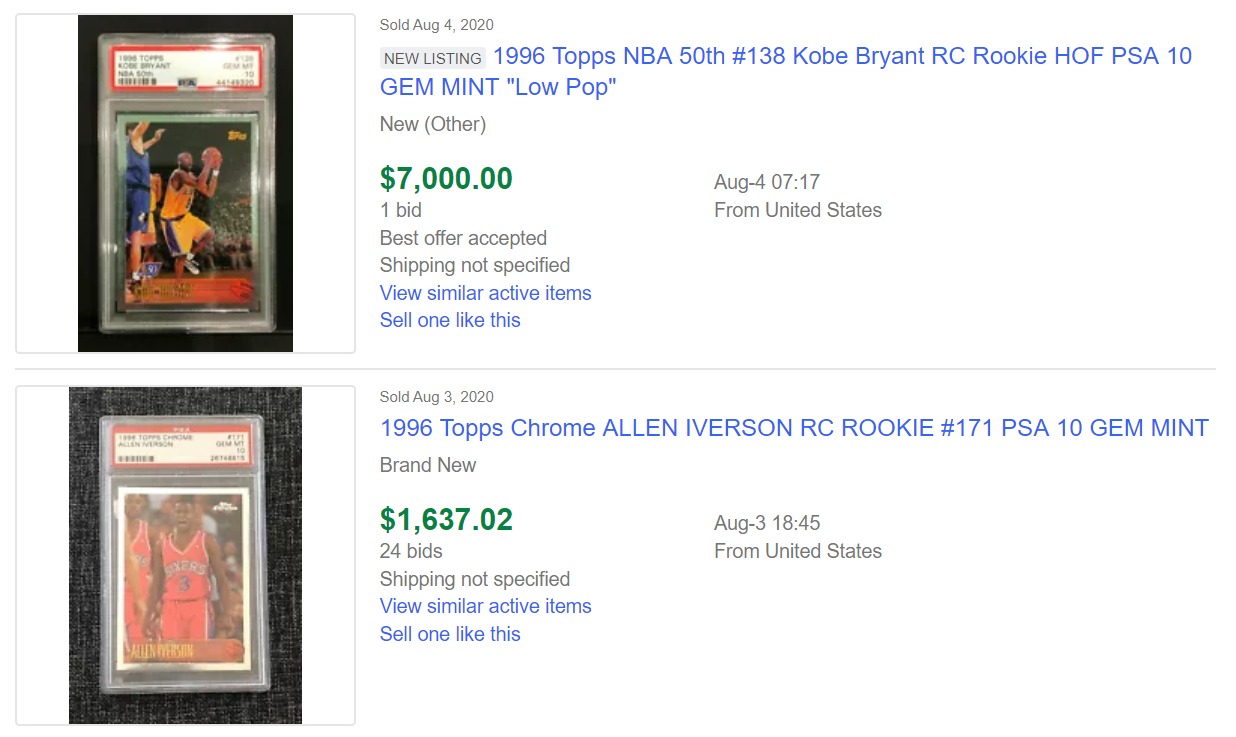 Ideally, you’d want a mix of our first two points – rookie cards from the best players of the era. A rookie card of some bench player who played two years in the league won’t get you anything in return.

The third and probablt most important factor on what cards from the 90s are worth anything is their grading.

There’s one thing certain with cards – graded cards (espescially PSA10s) are worth a lot more than ungraded cards.

For example, let’s look at a Gary Payton rookie card. The Glove was one of my all-time favorite players.

However, his rookie card is dead-smack in the middle of the Junk Wax era we spoke about before, so that means there’s a bunch of his cards printed. This means that his prices might not be as high as other players of his quality.

Seriosuly though, I bought a box of these SkyDeck cards and I think I have about 10 of these rooke cards laying around.

Now, let’s compare that price to the very same card, but ungraded. 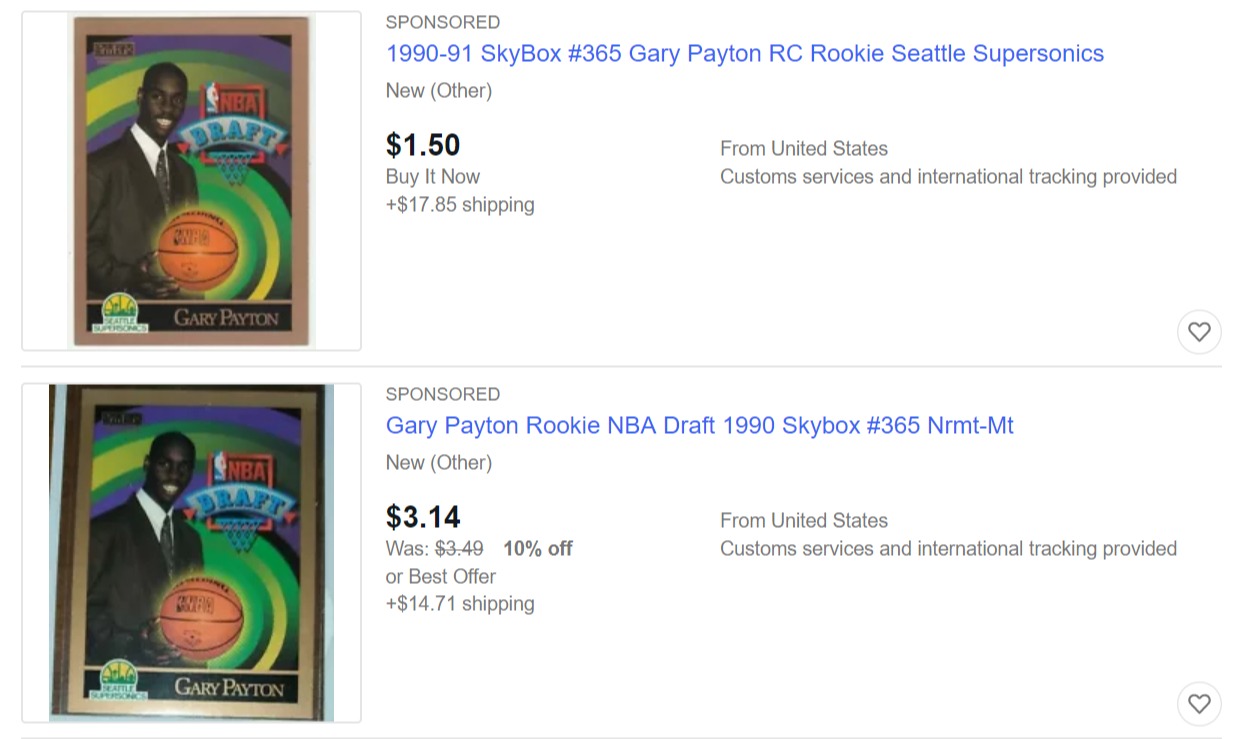 So, if you really want to make some money with 90s cards (especially early 90s), you need to have them graded a PSA10.

There’s obviosuly a risk with grading cards that old – if you get the rating you’re after, it’s happy days and you’ve turned a $1.50 card into a $60 card. However, if you don’t get the highest rating, the card will still be worth next to nothing, and you’ll have wasted your time and money getting them graded.

A nice little bonus that can give your cards a quick boost in value is if the player has regained some relevance in the public eye.

For example, there was a boost in the prices of Michael Jordan cards when the Last Dance doco was released on ESPN in 2020. But it wasn’t just MJ that increased in value – other key players from the Bulls. So the prices for Pippen and Rodman shot up too. And so did the OG Outback Jesus, Luc Longly (can you tell I’m Australian?).

Infact, a lot of the opponents featured in the doco had a mini price-rise too!

Be on the lookout to see if there’s films that feature players from your collection, or if they’re going to make the Hall of Fame (although, most 90s players worth collecting are already in the Hall).

Either way, look for when your player may be coming into relevance and make a timely sale. If might be worth taking a chance on grading some old cards if you know that ESPN are making a 30for30 about one of your players.

Final Thoughts: How to Know if Your 90s Cards Are Woth Money

Okay, so we’ve checked out the three main factors of what 90s basketball cards are worth money.

Odds are, if you’re searching for your old cards that you had when you were a kid, they probably haven’t been rated and are in a well-used condition. If that’s the case, your cards probably won’t be worth anything now.

I won’t say that they’ll never be woth anything, but it’s unlikely.

However, if you have a few unopened packs at home or if you always kept your cards protected, you may be able to get cards from the 90s graded and they’ll increase in value if they’re graded high.