I remember the 90s NBA – the Bulls domination, all the great moments, and of course, the incredible selection of incoming rookies to the league.

Grant Hill was one of the most underrated rookies from the 90s. Perhaps he got lost in the sea of all the amazing prospects coming to the league like Kobe, Allen Iverson, Shaq, Jason Kidd… the list goes on.

He was a gem of a player that definitely deserves some more love, especially if you’re looking to get his rookie cards.

These are the best Grant Hill rookie cards you should be looking at. 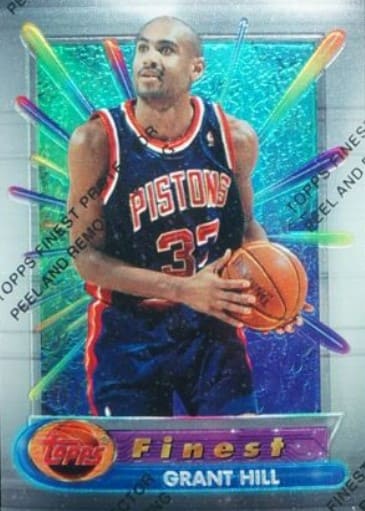 The Finest cards were all the rage back in the 90s, where you didn’t really have many other alternatives to the base cards.

Shinier cards were considered to be premium cards, which is why people liked the Finest packs. And with the addition of some parallels, the Finest Grant Hill rookie card is perhaps the best card you can try and get today.

It’s also a chrome card, which adds another layer of “fanciness” to the card. To protect the chrome, the cards were wrapped in special foils that were designed to keep it intact, and that’s exactly what you can see here in the image.

As for the base card, you will not have many problems getting it since the print run was relatively high.

It’s the refractor that will cost you an arm and a leg to buy. It’s a great card to own, especially if you collected cards back in the 90s and are looking to sell today. It will cost several thousand dollars in the GEM MT, making it the most valuable Grant Hill rookie card. 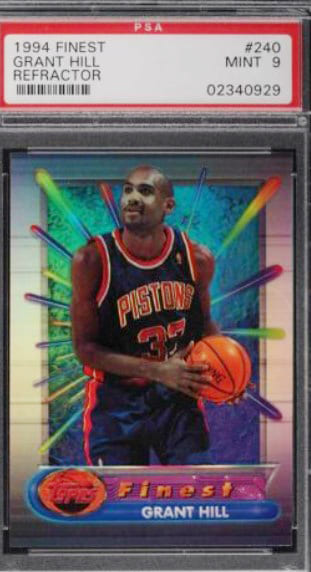 As you can see, the refractor is nothing special by today’s standards, just a bit shinier and of course, much rarer than the base card. 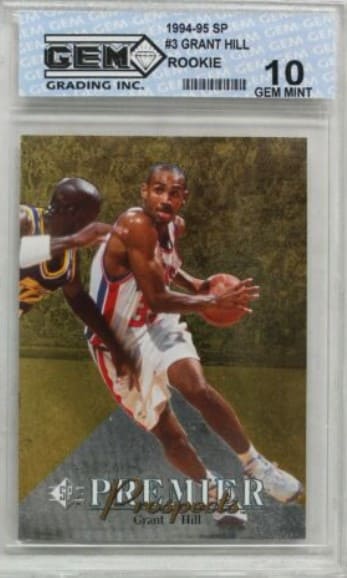 SP was one of the first brands to challenge the superiority and the premium feel that Upper Deck offered. It had etched foil and looks to be envied by other card companies, which ultimately pushed the business forwards.

We are lucky that the print run for these cards was quite high, meaning that even budget collectors are able to buy this card today.

It’s a blend of gold and silver, which clash in the middle of the card. But the showpiece of the card is the action image of Grant Hill, which seems to pop out very nicely, making the card even more appealing. 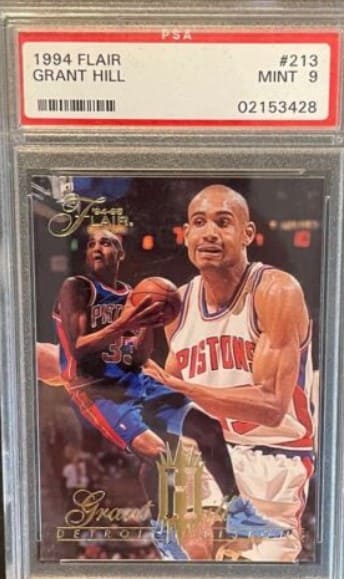 With this Flair card, I personally like the golden writing that’s present on the card, as well as the two action shots of Grant Hill.

The golden writing gives the card a premium feel, but it’s certainly not a premium-priced card. The highest the card will go in terms of value is less than a hundred dollars, which is the magic of the Junk Wax era in full effect for you.

The young Grant Hill here on the image shows his athleticism and physicality, which he was famed for and allowed him to earn comparisons even with Michael Jordan.

He also had the ability to handle the ball like not many other players, which became prominent throughout his career with the Pistons and also with the Suns later on. 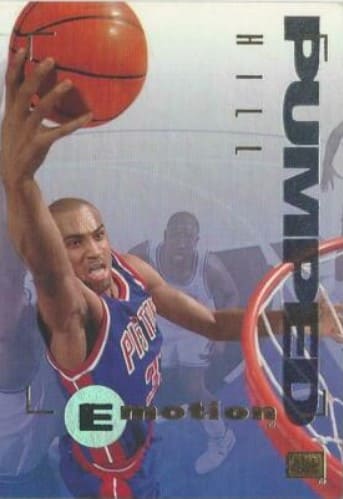 The Skybox Emotion was preferred by many collectors because of its glossy finish and the foil that goes together with it.

This card features a nice action image of Grant Hill, which shows his athleticism, again.

The great thing about this card is that there are many cards available on the market, making it easy to obtain if you’re looking for a cheap card that has that premium feel to it.

There are many ungraded cards, although graded cards tend to go for several hundred dollars if in the top conditions. 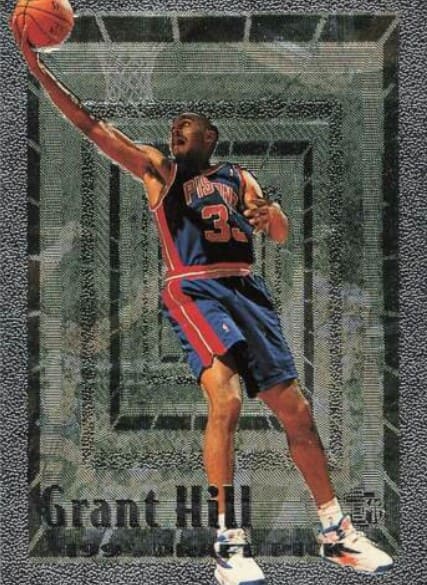 Topps Embossed is a bit of a mixed bag; it’s something innovative from Topps trying to add more action to the image by adding these square spirals in the background and the image shot of Hill in the front.

However, this approach wasn’t the most popular among collectors, and the Embossed sub-brand eventually died out and left its place to other brands.

Surprisingly though, this is precisely what tickles the fancy of many collectors that want to own something that’s not here anymore today.

If you don’t like the silver background, you can go for the Golden Idols parallel, which will be difficult to find. 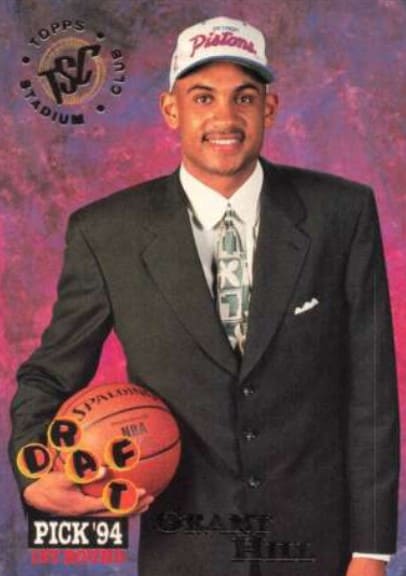 The 1994 Topps Stadium Club Grant Hill rookie certainly deserves a mention on this list. If not for anything else, it should be on the list for the dress Grant Hill is wearing. I mean, look at that tie – outrageous!

Joking aside, this card will appeal to those collectors who prefer to collect these cards with images from the draft night, which always feature drafted players in suits and with the caps of the team they were picked by.

Stadium Club cards were not especially known for these types of cards, as they often preferred to have action images on their cards.

This is the case for the Series 2 of these cards, while this particular card here is from Series 1.

And the whole card just screams the 90s – if you miss them, then you will LOVE this card. The background, the design, the graphics, and Grant Hill’s fashion choices – the complete package. 🙂 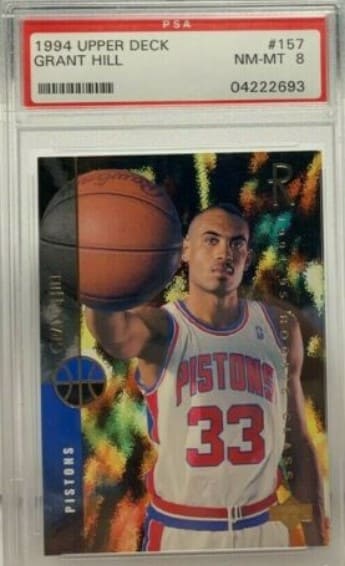 Upper Deck was one of the most popular card companies for NBA card collectors from the 90s. The 93/94 Michael Jordan card still remains in the memory of many collectors, but the Grant Hill rookie here would also make for a nice addition to your collection.

If you don’t like the plain and boring cards with only the image of the player on them and you like a bit more colors on your cards, this is the one you can go for.

It loses some points in the longevity of the design and the graphics, which are a bit more subtle and have aged decently. The graphics on the left hand-side of the card also add a nice touch, although they don’t quite seem to fit with all the colors in the background.

Still, this is a worthy alternative Grant Hill rookie card you can consider and of course, it’s Upper Deck so you really can’t go wrong with this one. 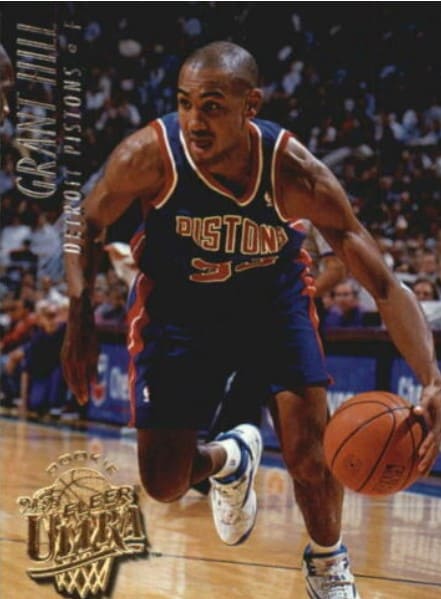 This Ultra card is almost the exact opposite from the previous card – it is all image, and little to no graphics.

And that’s what many card collectors prefer – crisp images with some elegant and subtle graphical elements on the card, which makes for a premium feel.

But despite that more premium feel, the card is jokingly easy to get today, and also quite cheap. While you will struggle to find a decent graded card, you will be able to find many ungraded cards on the market.

As always, err on the side of caution with ungraded cards since you don’t really know what you’re getting, and it’s always better to ask the seller twice as to ensure you’re not buying a knock-off. 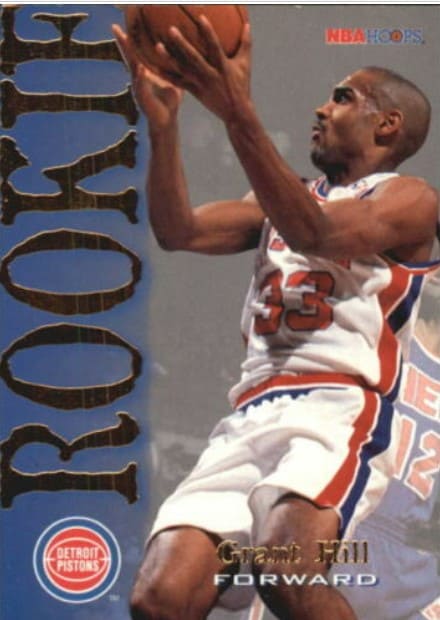 The NBA Hoops brand of cards is still alive and kicking today, but back in the 90s, it was not one of the most popular brands of basketball cards.

Hoops went for the interesting choice for letters when it comes to the left hand-side of the card. And there are two varieties of this card that you can go for. Series 1 is this card, while the Series 2 card also involves Dikembe Mutombo.

This card is way more populous than the Series 2 card, though. This also means it’s cheap and easy to get.

If you would love to explore the history of Hoops cards and you love the brand, then you should certainly go for this one. You’ll find that it’s quite different from the Hoops cards we know today.

Again, be careful with ungraded cards so that you don’t get yourself burned, and make sure the card is authentic before buying.

It’s fair to say that you have many great options when it comes to Grant Hill rookie cards.

The great thing here is that you’ll be able to find the best cards even if you don’t have the bucks to pay the most expensive cards.

That’s partly due to the higher prints of some of these cards, so you might end up with some elegant and premium-looking cards for a relatively cheap price. Most will not cost you more than a couple hundred dollars to buy.