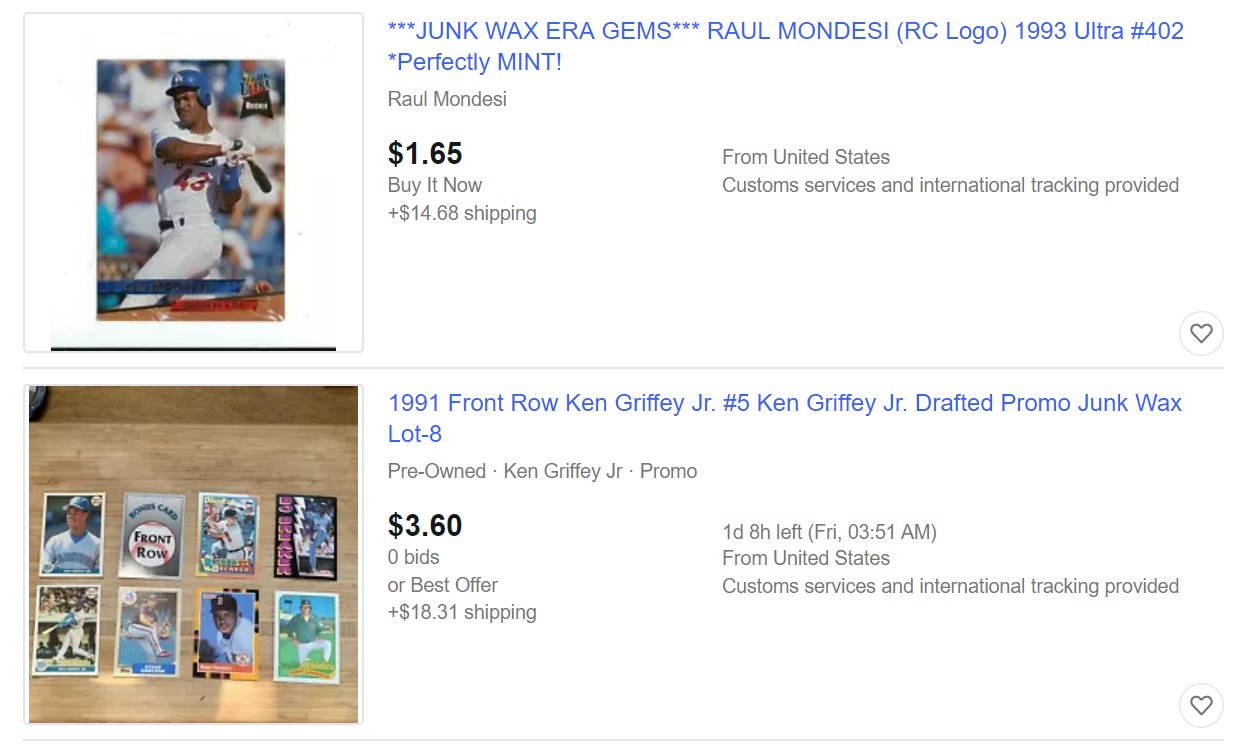 Today, we’re going to discuss everything to do with Junk Wax. In this article, you’ll learn:

What Was The Junk Wax Era in Sports Cards?

Basically, this is the period of time where sports cards exploded onto the mainstream (again). There was a massive boom of new collectors and they all wanted cards.

At that time in the NBA, there was Bird, Magic, MJ and all the others stars lighting up the league. Ken Griffey Jnr was hititng homers in the MLB and Bo Jackson was doing crazy stuff like this in the NFL (along with equally impressive things in Baseball too)…

New collectors wanted their cards, and the major card companies printed more and more cards to meet the needs of the growing market.

In fact, they printed too many cards.

Way too many cards.

The drastic increase in printed cards meant that there was an ample supply in stores. If you wanted a Shaq rookie card, you could probably find one.

Now, most rookie cards from that time aren’t too valuable. 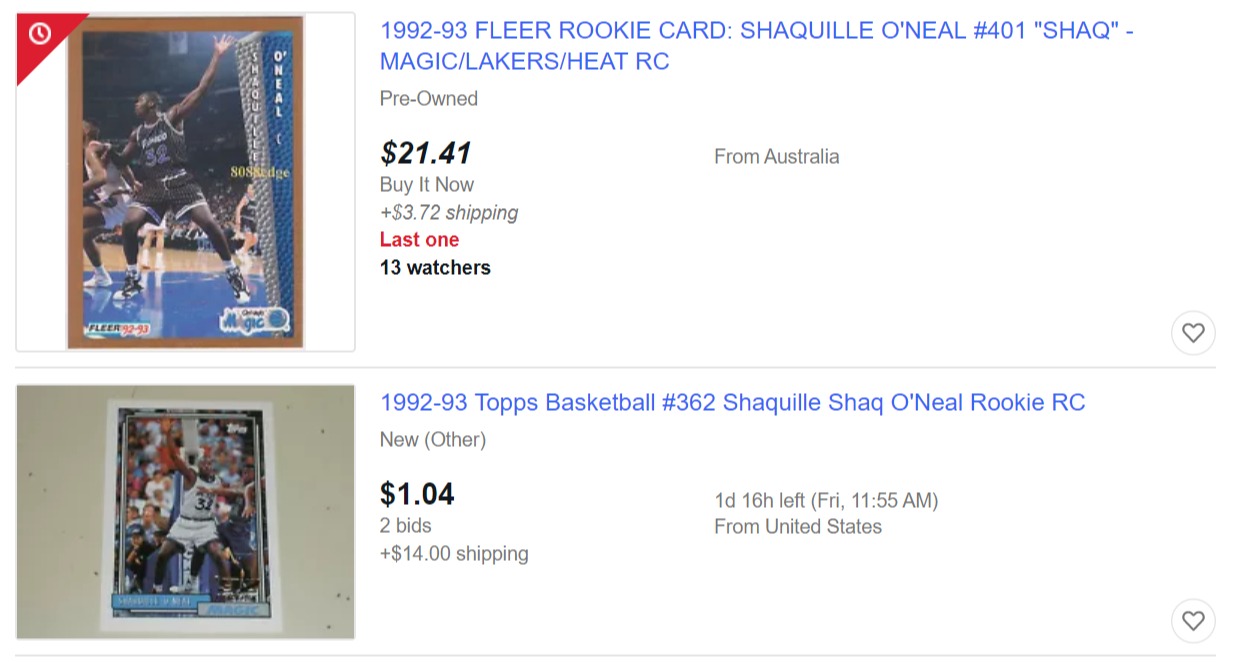 I remember, just as I started dipping my toes back into the water, I saw a few boxes of 1990 SkyBox NBA cards for like $100 on a Facebook Buy, Swap, Sell page and thought it was a rock solid investment.

“Mate, those cards are nearly 30 years old and they’re unopened, they must be worth thousands by now”

Needless to say, they were not a sound investment.

Why Junk Wax Era Cards Aren’t Worth A lot Today

As we touched on before, Junk Wax isn’t as expensive as you’d think because there’s just too many cards out there in circulation.

However, if you’ve got some rookie cards of key players from the era, you still might get some value. This is espescially true if:

Should You Buy Junk Wax?

Okay, so it seems like I’ve talked a lot of trash about these Junk Wax era cards, and there’s a lot of merit in it.

However, that doesn’t mean you should avoid them completely.

Sure, you probably won’t turn a massive ROI on these cards (however, you can never rule it out with card collecting). However, for most of us, these are the players we grew up loving. They’re the posters we had on our walls growing up.

As a collector, there’s still something special about owning the card from your favorite player when you were twelve – even if it’s a crummy Junk Wax.

For example, if you’re a Barry Bonds fan, you can probably pick up a 4-card set like this for under $10. 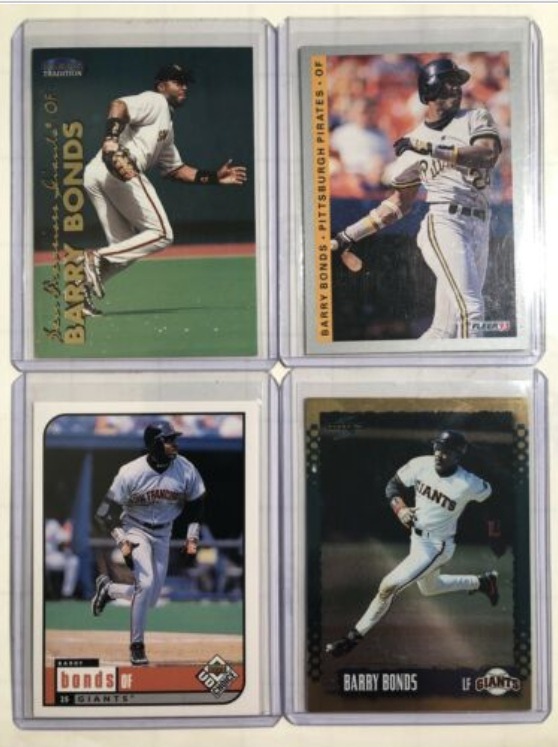 While you probably won’t make your money back on them, they’re still cool cards and will be a welcomed addition to your collection.

The same goes for someone who collects all the cards of their facorite players. If you’re a Magic Johnson fan and collect all of his cards, you’ll need to add the Junk Wax into your collection.

Can You Make Money off Junk Wax?

As we touched on above, odds are you won’t make too much money with Junk Wax. However, there’s still some profit to be made if you know your cards and you’re willing to put in the work.

Like any card set, there’s a range of values depending on the player and the quality of the card.

Sure, some cards may be only worth $1 or $2 to sell.  But you could easily find them for sale for 20c or 50c each at shows. If you’re willing to do your homework and don’t mind doing the leg work of flipping cards, there’s potentially a little bit of profit to be made.

You won’t make a full-time income by any stretch, but you may be able to turn your card hobby into something self-sufficient. Which is a hell of a lot better than most are able to do.

And who know, maybe you’ll find the right rookie card that you can re-sell north of $100.

Will There Ever be Another Junk Wax Era?

A lot of people wonder, as cards are becoming more and more popular, are we in danger of another Junk Wax era?

Honestly, it is unlikely that there will be another Junk Wax era anytime soon. But it’s so hard to tell. There are so many variables at play.

Cards are experiencing some huge growth, and with more demand comes more supply- but I don’t think that means that there’s going to a mass overprinting again. The way it’s going now, there’s just going to be higher prices!

It seems like every few years there’s some “Are we entering Junk Wax 2.0?” doomsdayers asking the question, but I think we’re safe for now.

Having said that though. It really depends. I wish I could have a certain answer, but if I could correctly predict the future, I’d probably spend more time placing bets and less time writing about sport cards!