Scottie Pippen was a part of the legendary Chicago Bulls team that won six NBA championships. Michael Jordan was always the star of the show, but Scottie Pippen was one of the most underrated players on that team.

Perhaps most of the glamor he got came in his later years with the Bulls when people started to appreciate his defensive abilities, and he was no slouch on the attack, too.

These are the best Scottie Pippen rookie cards that you can consider buying today. 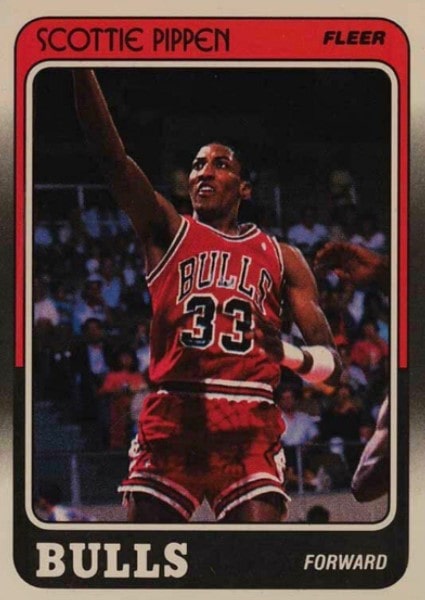 The 1988 Fleer #20 card is the go-to card when it comes to Scottie Pippen rookie cards. This is the mainstream choice that most card collectors go for. Overall, this Fleer set is perhaps one of the most famous sets in NBA history, featuring rookie cards of players like Dennis Rodman, Scottie Pippen, and some other great players like John Stockton.

Like Scottie Pippen himself, this card only became appreciated years after the original release. Initially, Pippen was seen as a huge talent but his defensive abilities weren’t appreciated until a few years down the line.

Today, this is by far the most recognizable rookie card of Scottie Pippen and one of his best cards on the whole. It’s also one of the more popular cards of the 1980s. Even though it doesn’t quite reach the high price of a Michael Jordan rookie card, it’s still up there in terms of popularity.

Scottie Pippen had some cards even earlier in his career, and some are even from 1987. However, those are some oddball cards that weren’t really mainstream back then, which meant that Fleer was automatically considered as a true rookie card.

There’s a great appeal to this card when you look at it. The main appealing factor is certainly the image of Pippen dominating the center, and the 80s look makes it even better for those who like a bit of a retro style with their cards.

On the reverse side of the card, you’ll see everything you’d expect to be there: his stats, data, and other information about the player. There’s a spelling error on the back where instead of Pippen, his surname is spelled as “Pippin”. 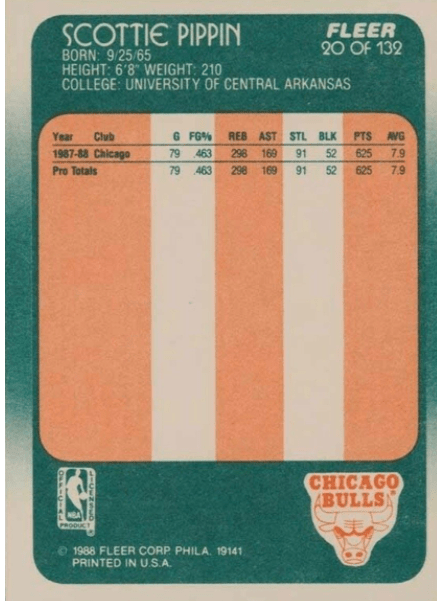 Today, you’ll probably not have too many problems finding a good Fleer Pippen rookie card. There are a lot of PSA 8-graded cards, and you might struggle to get a top-rated card of this type if you’re something of a perfectionist.

As always, look for some of the conditioning problems if you opt for an ungraded card. The most common issues with this one are some chipping at the corners and general wear-and-tear, which is visible on the surface of the card.

So the Fleer 1988 card is the official rookie card of Scottie Pippen, but what about some other early cards that you might fancy if you’re looking for something a bit less expensive? 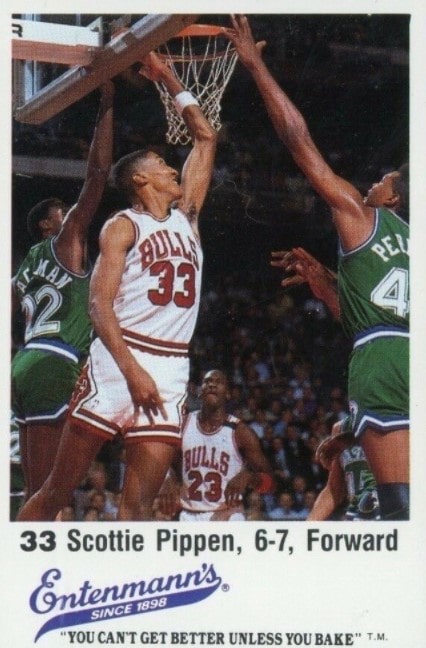 As we’ve already mentioned, there were some oddball cards when it comes to Scottie Pippen’s early cards, so the Fleer card was really the first one from a major manufacturer, making it the official rookie card.

But the Entenmann’s card of Scottie Pippen is perhaps the earliest known card of this small forward. This card was used as a promotional card for Entenmann’s products, which was a bakery from NY that often used basketball cards to promote their company and added them to their products.

These were usually given to Bulls fans at home games. The set contained 11 cards, and most of them contained Chicago Bulls players as they were given to the home fans. This was a great way to promote the company, although today, the card is not worth nearly as much as Pippen’s official rookie card.

This card might go for a few dozen bucks if you’re willing to get a PSA 8 or PSA 9, while a PSA 10 might cost a bit less, but not more than a couple of hundred bucks. This is a great budget card to own, and it’s also perhaps the earliest card that you’ll find of Pippen. 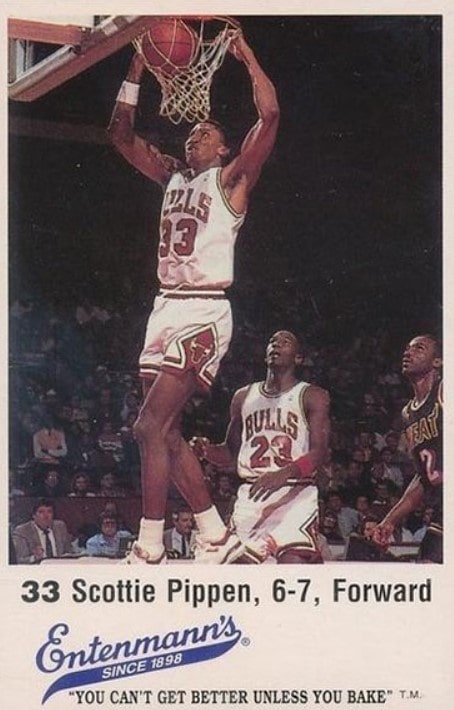 Entenmann’s marketing strategy proved successful at the start of the 1987 season, and they continued their efforts in the next season, too. The result is another Scottie Pippen card, this time dunking the ball into the net.

This card is even easier to get, as it might only cost you a few bucks to get if you can get it in decent condition. 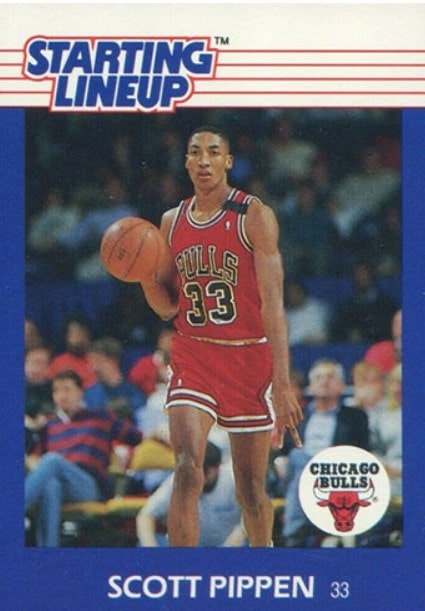 The Kenner Starting Lineup card set is another great set from 1988. It was the first official basketball set of this company, and it immediately contained greats such as Scottie Pippen. This company also produced other sports cards, such as baseball and football cards.

There was an instant success with these cards, as they boomed right out of the gate. However, the problem today will be finding this card in good shape, as the blue bordering is very prone to damage and it shows it quickly. They don’t age well, these cards.

So your best bet is to look for sealed cards that have still retained some of their original value, but at least you can be sure that they’re still properly intact. Or, you can go for some graded cards for a PSA 10, although that will potentially cost you several hundred dollars. It’s the second most expensive card of Pippen from his early days, after the Fleer 1988 card.

What makes this card so memorable is the image of Pippen on the card, in his famous running position. These cards could have been a great success for many years to come, if only they were not ousted by other major card companies such as Fleer, Topps, Upper Deck, and others that we know so well today. 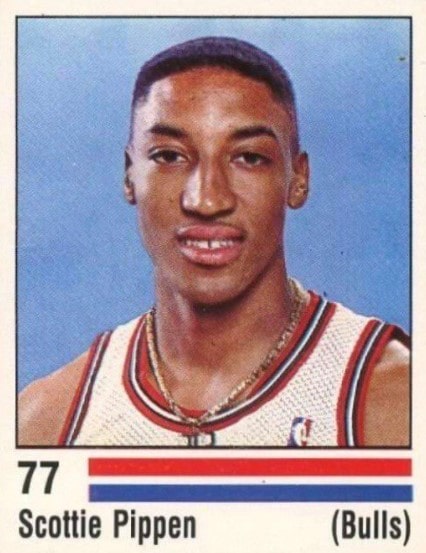 This sticker is also known as the “Spanish sticker” because of the Spanish language on the back of this sticker. Originally, stickers were at least as popular as cards back in the 1980s when cards weren’t yet such a great deal. These were mass-produced and costed less to make for the companies, and collectors loved them.

This sticker was a part of a large NBA sticker that was released by Panini in 1988, which featured some of the all-time NBA greats in Larry Bird, Magic, Jordan, Ewing, and of course, Pippen.

Panini stickers have always been and still are, one of the most popular types of stickers all over the world. This sticker was available to consumers anywhere in the world; however, today it’s not as widely present as it was back then.

That’s because these were considered consumables and people stickered them into albums or onto other surfaces – not many of them were kept in their original state. So if you do manage to find one in good shape, you might have to spend a couple of hundred bucks.

There were many cards in the coming years after Pippen finished his career, and these were also a bit more expensive than his rookie cards – at least some of them. 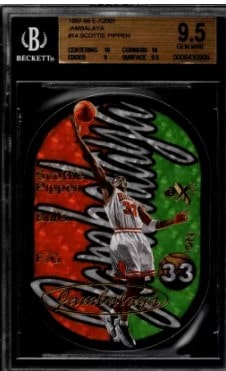 This card from 1997 is perhaps the most expensive Pippen card from the 1990s. The appeal for this card is great, because of the colorful design and a dunking Pippen on the card itself. They’re also very rare nowadays, so you might have some problems finding this one.

But if you do, prepare your money because you will have to spend quite a bit to get it, at least in good condition. This card can cost several thousand dollars if it’s well looked after. 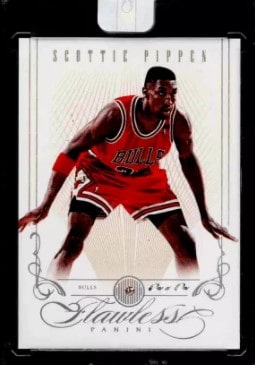 Panini Flawless cards have always had a great look about them, and this one is no different. You’ll get the typical Panini Flawless design, which does come at a premium cost. So you’ll need to be prepared to spend a bit more to get this one.

If you like modern cards and you want older players on them, then this card is right for you. Not everyone is a fan of old cards, and with the lack of variety that was typical for the 1980s, you can opt for this card instead.

And of course, there’s also his famous defensive pose on the card. Pippen is known to be one of the best ever defensive players, so it’s only fair to have him on the card in this way.