Depending on why you ask, Tom Brady is the GOAT when it comes to football. Again, depending on who you ask, it may not even be that close!

No matter what your thoughts on Tom Brady are, you can’t deny his success and ability over the years. And, if you remove the how annoying it was when they won every year – the Tom Brady story is one of the absolute best underdog stories ever told. Seriously, who’d have ever thought that this guy would end up being the best Quarterback of all time?

I’m Australian, so my early memories of Tom Brady was waking up early to watch the Superbowl every year (we didn’t get games every week) – and it felt like the Patriots were playing every year…

With all that in mind, as you can imagine, Tom Brady’s rookie card value is sky high, and will grow over time. In this article, we’ll look at the five most expensive Tom Brady rookie cards, and five more you could invest in at a lower price towards the end of the article.

Note: Like any “most expensive” list with sports cards, use my estimates as a ballpark figure. The market is pretty healthy at the moment and prices are constantly rising.

Here, we’ll go through some of the most expensive Tom Brady rookie cards on the market. 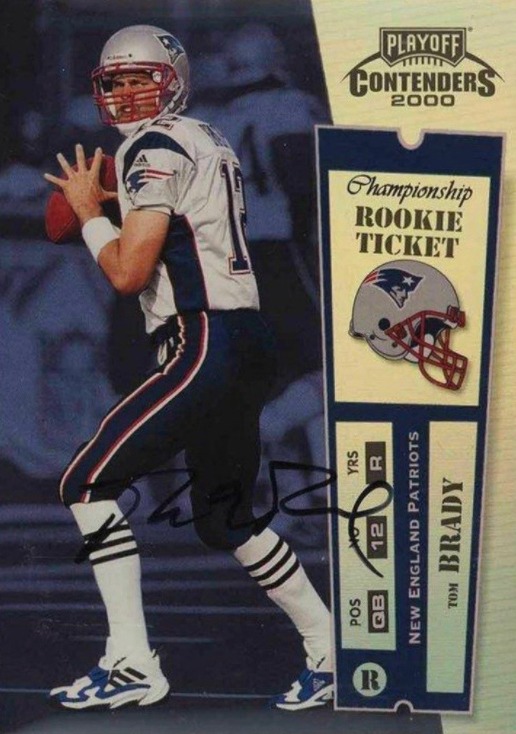 This is the card that any modern football fan wants in their collection.

Tom Brady’s Championship parallel of the playoff contender series was limited to only 100 prints at the time of release – so it was super-rare to begin with. Then, add over 20 years of wear and tear to the cards and you have an incredibly high price tag, that will only rise.

You don’t see many of these around, and the most recent sale I can find is an auction where the card sold for over $400,000 – about the same price as a new Rolls Royce (or like 15 normal-people cars).

I can only imagine the price rising and rising over time too. 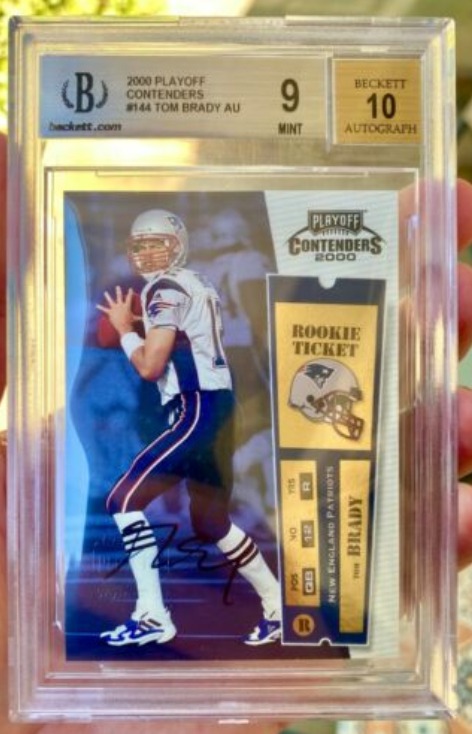 These 2000 Playoff Contenders are a great set of cards and still sell really well to say the least. Their price continues to grow over time and you can buy a PSA 10 version of this card for over $200,000 if you’ve got it spare.

I’ve even seen BSG 8.5s going for well north of $30,000. So there’s crazy value on all cards. And that’ll probably go up too. As the top end prices rise to even more unattainable prices, the lower grades will rise with them.

But my favorite part about this card was the recently sold listing for over $45,000 which said “a great gift idea” on the eBay listing. I’m not sure about you but I don’t know anyone giving $45,000 Tom Brady rookie cards out as gifts. Maybe I need new friends. 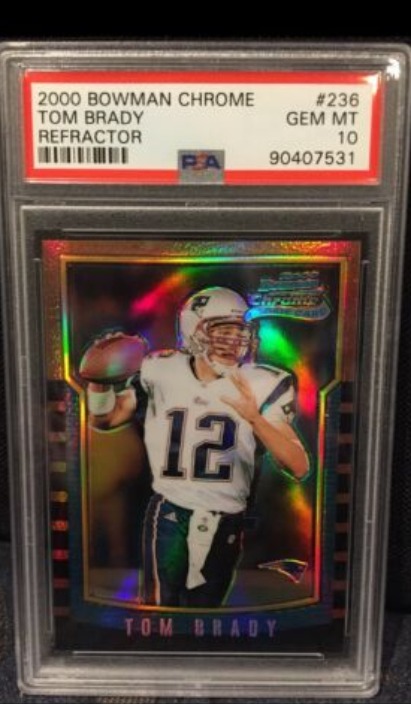 So, without that numbered print, it’s pretty hard to know how many cards are out there. However, there’s only about 110 PSA graded versions of this card out there, 60 of which are a 9 or 10. So, you’d think there might be that number again of BGS-graded cards, give or take a few. 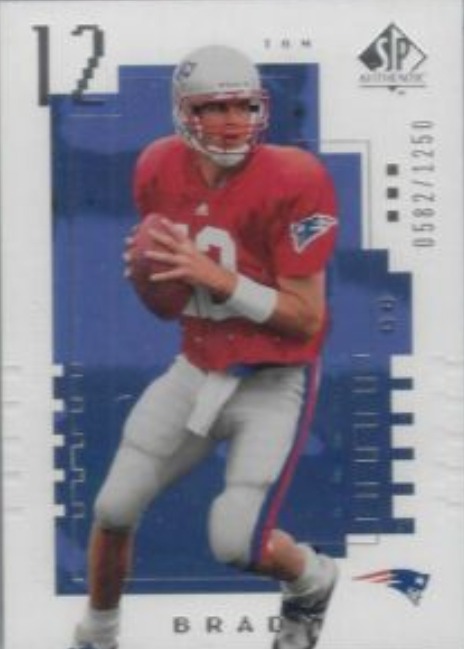 SP Authentic are a high-ticket card and have always been pushed as a top-of-the-line card with awesome designs.

These days these cards may not look that special, but this card was the premier standard in 2000 when they were released.

Getting a price for these is difficult because a few of these cards were sold as a combo with other cards – still, I think you’l need over $30,000 to get your hands on one now. 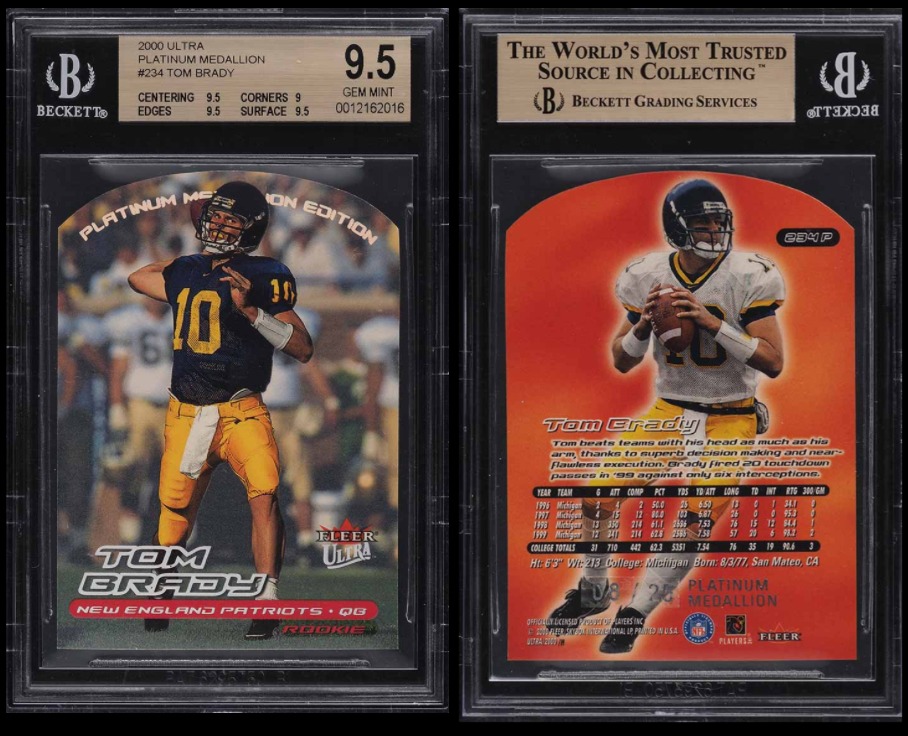 Seriously though, this card has Brady in his college gear. The card has a nice look to it with a curved top.

This card was limited to 25 with it’s initial release and pretty much every copy is tucked away in some expensive collection somewhere. But, if you can find one of these on the market, you’d be looking to pay around the $25,000 to $35,000 price range.

There’s only six of these cards registered with PSA too, so they don’t come up every day. I’d say this card is more of an addition to an established collection rather than a signature piece of a collection. Still, a beautiful card – and it’ll go up in value over time too.

If paying over $20,000 for a card doesn’t float your boat, there are some other ways you can get in on Tom Brady rookie cards at a lower price point.

Now, obviously, these cards won’t jump to $400,000 prices anytime soon – trust me, if they did I’d probably buy them for myself if I could guarantee that.

However, here are a few cards that you could invest in at a lower price and you could double your money (or more) in a few years.

When looking at investment cards, I like to only look at graded cards. Sure,  you can buy ungraded cards for less, but I don’t really link investing in ungraded cards (unless they’re dirt cheap).

Basically, graded cards give the buyer more security – buyers know a PSA 10 is a top quality card. This makes it easier to sell down the track.

Find it on eBay 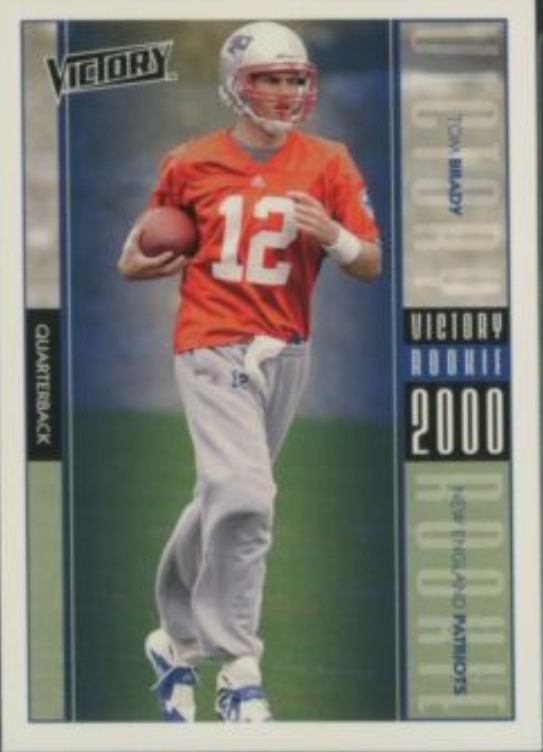 If the rest of the Brady cards continue to increase in price, I don’t see why the PSA 9s and 10s won’t increase in value with them.

There’s only around 200 PSA 10s out there, so there is some scarcity on the card which should solidify value over time.

You can find it on eBay. 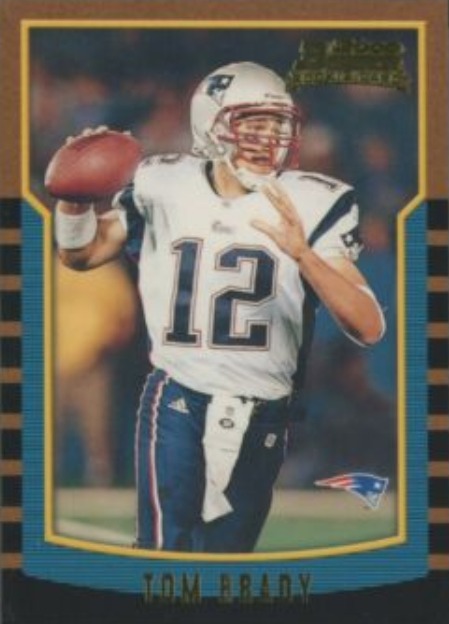 This card is the base version of the Bowman card we spoke about earlier. You can get your hands on this card for somewhere between the $1,500 to $2,000 for a PSA 10.

The base card will usually follow the price rise of the limited edition cards. So, as the expensive refractors rise in value – so will the base card.

Another card with Tom Brady in his college gear, this Skybox card can be purchased for about $250 to $1,500 depending on if you want the PSA 10 or the PSA 9.

In short, yes. Tom Brady rookie cards will always have value. Brady is one of the best Quarterbacks of all time – if not the best of all time.

In fact, I can’t think of any recent player that will have the longevity and impact that Brady will have for cards. Don’t get me wrong, there are some new guys coming through who are good, but Brady’s career is the all-time best.

And no matter how many years of Brady cards there end up being, there will only be one rookie year.

With that, his card price is likely to stay stable at the very least. The only reason his cards would drop in price is if there’s an industry-wide market correction.

It’s far more likely that Brady’s cards increases in price. I actually wouldn’t be surprised if his rookie cards under $3,000 double in price over the coming years. I can’t imagine the $450,000 cards doubling – but who knows.

If you’re looking for the Tom Brady rookie card value, there’s a lot of cards to check out. You can buy the very top cards for up to and over $500,000, but there’s some value at the lower-end that you can but hop on for investments.