Lionel Messi is arguably the greatest player of all time. The Argentinian attacker is one of the two quintessential players of the 2010s, and a must-have for any soccer card collector or investor.

Having started his career at a big club like Barcelona, there’s quite a lot of product out there considering it’s soccer in the mid 2000’s. The only thing is, soccer cards weren’t as popular as they are these days. Panini made a lot of player-stickers as opposed to cards. These stickers were for collectors to stick into their album and have been incredibly popular for many years.

In fact, if you ask any soccer fan they’ll probably know Panini as the company who make World Cup Stickers.

However, Messi has some rookie stickers and cards to collect.

In this article, we’ll look at Lionel Messi rookie cards and stickers, along with where you can find them.

Here we’ll look at the rookie cards and stickers that came out for Lionel Messi during the 05 Barcelona season. 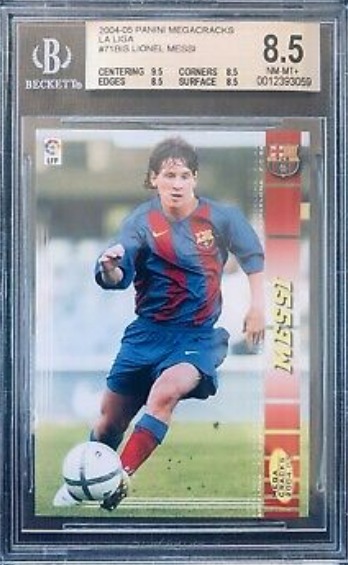 The card that most think of when they picture a Lionel Messi rookie card. Megacracks (also shown at times as Mega Cracks or Mega Craques) is a set that covers Spanish and Portuguese leagues.

This card shows Messi dribbling at defenders and is a great action shot.

These cards are pretty hard to come across these days. They weren’t printed in America, and card grading wasn’t a big thing in Spain when Messi started playing. So, most cards you’ll find are raw. I don’t think I’ve seen a PSA 10 in the wild before.

The card is a classic and will be one of the top soccer cards for a long time. Find it on eBay. 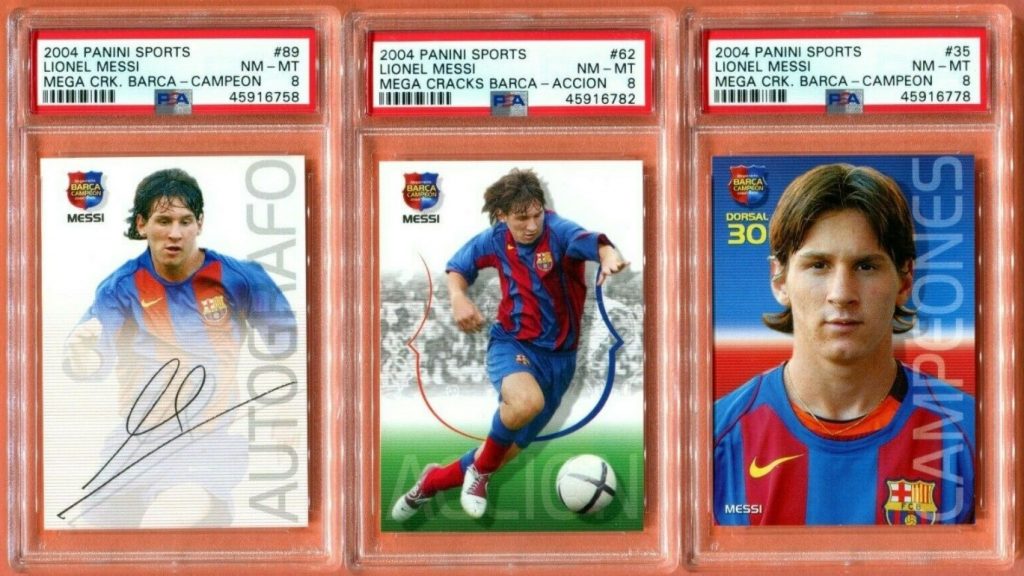 Along with the Spanish league Mega Cracks set, there was also a smaller Barcelona set that was distributed.

Well, there were kinda two sets of the same card released – the Campeón and the Campió depending on what part of Spain you’re in.

These cards are pretty special and also a hard card to find. Although, without crunching numbers, I do feel like I’ve seen these cards more than the La Liga (the Spanish league). 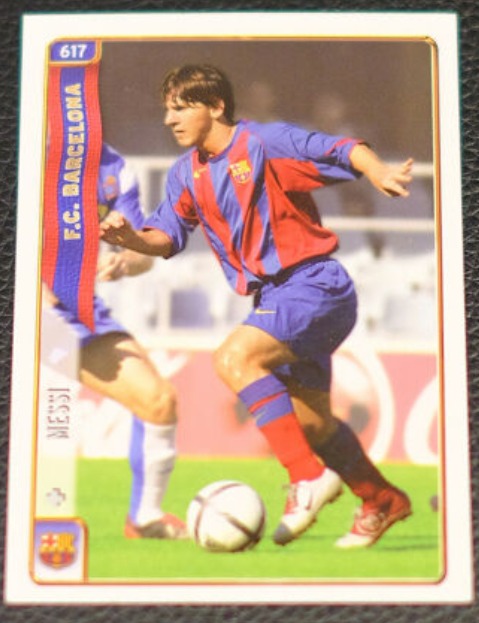 Another set that covers the Spanish league, this Mundi Chromo set isn’t as popular as the Panini sets above. With that, you can buy it at a cheaper price.

Messi also appears as a part of a four-player card in this set. Let’s just say that Messi had the best career from the bunch…

Search for it on eBay.

Messi’s first World Cup was in 2006 (which was also Cristiano Ronaldo’s debut World Cup), so product will be based off that year.

Even though this is a sticker and not a card, I still consider this to be Lionel Messi’s true World Cup rookie piece.

The single sticker price will rise in the future as the market adjusts. I’ve got an unopened box or two at home for that moment! 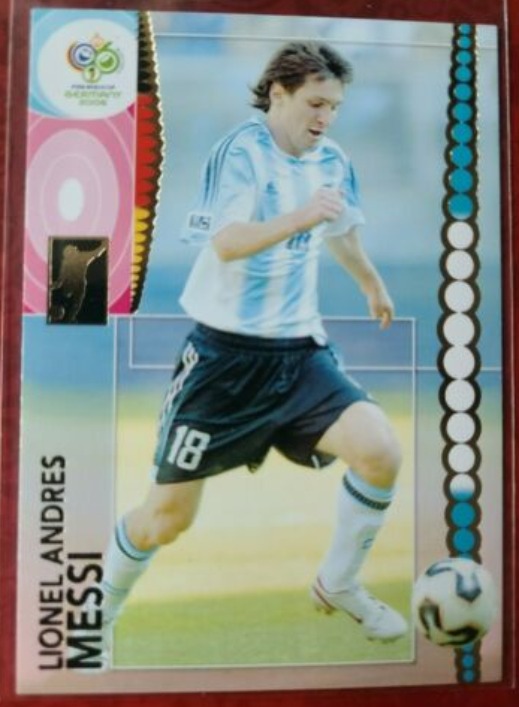 While the sticker is the true World Cup rookie item, this card is the one that is earning all of the dollars. The card has increased drastically as the soccer scene gets more and more full.

Cards are more of a well known commodity compared to stickers, so it makes sense that this card would sell for more. It’s also harder to find.

The card is Leo’s first World Cup card (along with the one below) and a great buy. 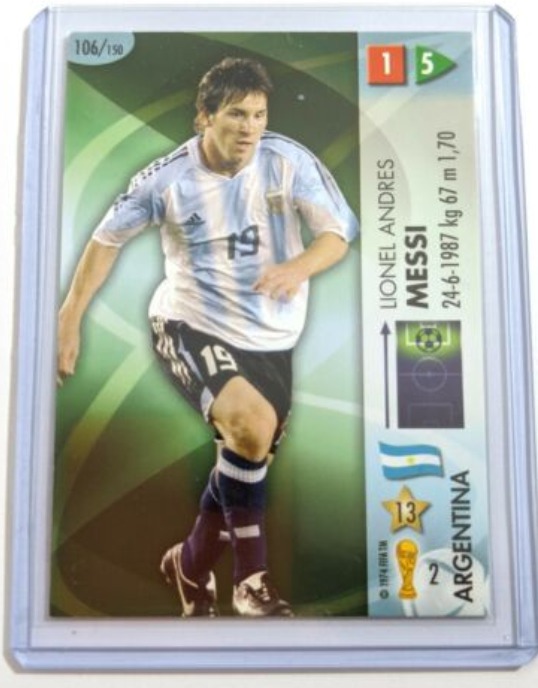 The World Cup Goaaal set was only released in England and the UK to my knowledge and have a bit more of a ‘kid’ vibe too them.

However, this often-forgotten about card set from the 2016 World Cup has been slowly increasing in price and I think it’ll soon get a lot more credit. Search for it on eBay. 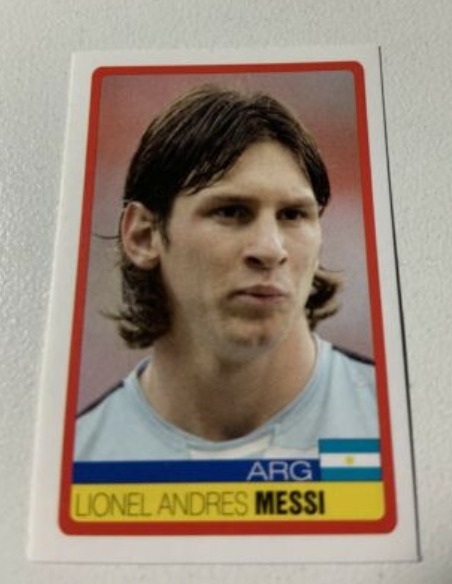 It isn’t just World Cups that soccer players play in for their national team. The Copa America is a competition for all of South America’s  top nations (plus usually a few guests, the USA was in this version).

This rookie sticker for Messi is incredibly under-priced and should keep rising as time goes on. You can probably still find Messi’s Copa America sticker on eBay for a bargain.

As far as soccer cards go, there’s arguably no better investment than Lionel Messi. The Argentinian’s prices should continue to increase over time.

Furthermore, his rookie products aren’t overproduced either – there’s not too many cards our there and even fewer of those have been graded.

I’m buying Messi cards and stickers whenever I can. But it’s also a great collection piece.

Lionel Messi is one of the best soccer players of all time and collection or investing in his rookie cards is a great option.