I grew up with Kobe as the main man in the NBA. Him and KG were the two that were at their peak when I was first getting into the game at an age where I was old enough to know what was going on.

Hell, I still yell “Kobe” when I’m throwing paper in a trash can.

Kobe was a part of a stacked rookie class to with Ray Allen and Allen Iverson also drafted the same year. As much as I also love AI, you’d have to say Kobe was the star of that draft class. In fact, Kobe became “one name” famous like Ophrah or Cher… You only need to say his first name to know who you’re talking about.

As you’d probably imagine, some of Kobe’s rookie cards are high-ticket items and the apple of almost every collector’s eye (maybe not Celtics fans).

With that in mind, in this article, we’ll look at the top Kobe Bryant rookie cards by price – as well as a few under the radar cards you might want to invest in.

Also, it’s important to know that these prices are rough estimates and based off prior sales data. Card prices have been rising steadily, so these prices may be somewhat off by the time you read this – but they’ll be in the ballpark. 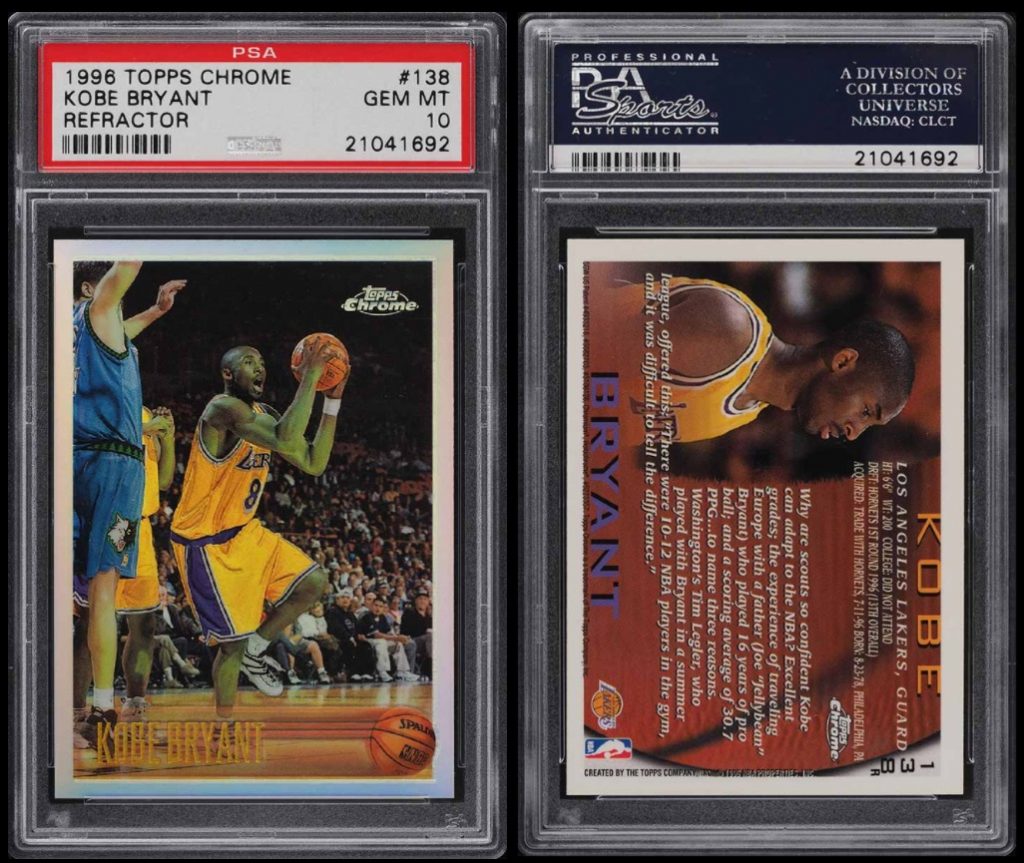 The top of the line when it comes to Kobe rookie cards is the Topps Chrome Refractor.

Even if you found a base version of this card, it still wouldn’t be cheap. However, the Refractor was easily the top-of-the-line parallel. The price has been going up and up in recent years. In 2020, there have been sales between the $60,000 to $80,000 price range – with a sale even collecting $81,000.

Obviously, with a card like this there isn’t many sales per year, so there isn’t really enough data to get an accurate idea for an average price or anything like that.

Still, the card is obviously incredibly expensive and could even still rise up in price. I wouldn’t be shocked it if clicks over to $100,000 in the future!

Search the card on eBay here to see it for yourself. 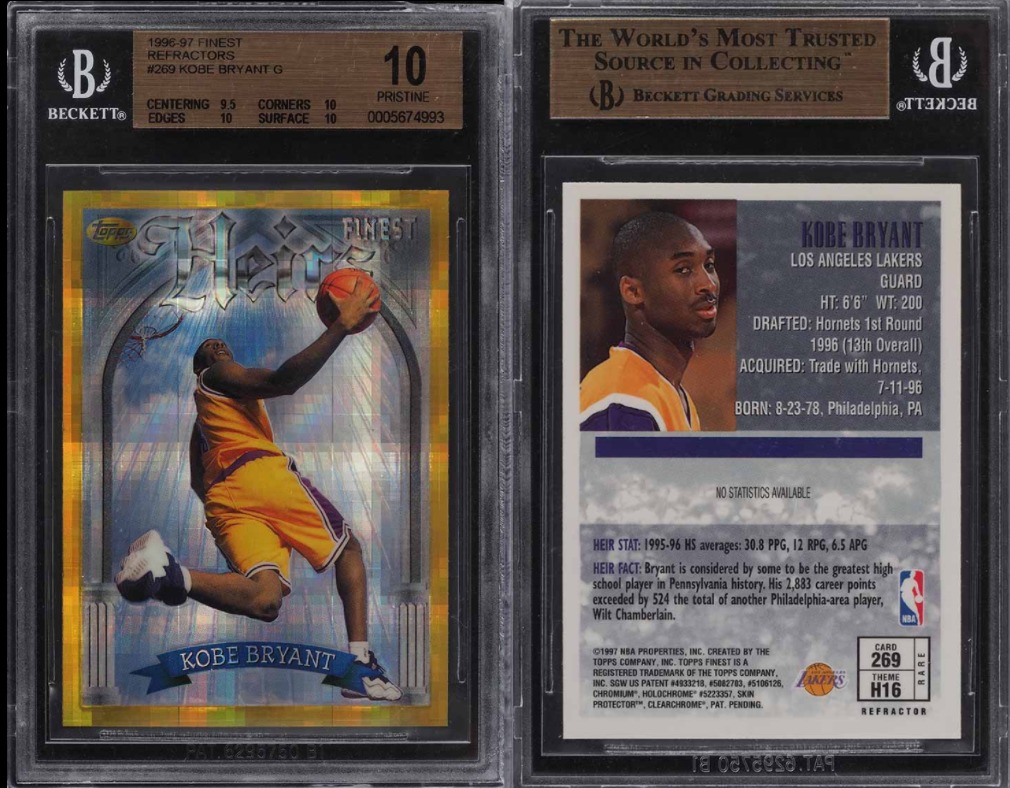 The Finest Heir cards are pretty awesome and always a collectors item. This one takes out second place with a BGS 10 selling for nearly $25,000 in 2020.

Obviosuly, a PSA 10 would sell for less than that – but the card is quite rare so it’s hard to find a lot of recent sales data.

The Finest cards are always attractive to collectors too, and this card is no different, so I’d think that the next PSA 10 that went up for sale would go for a very good price too. 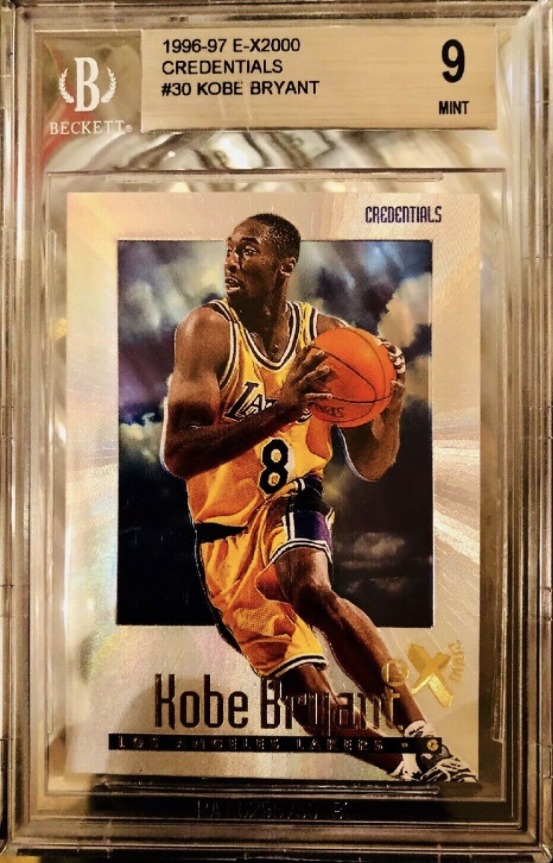 Coming in next here is this awesome card from Skybox. I don’t know what it is about Skybox, but I absolutely love their cards (you’ll probably notice me mention Skybox whenever I’m using an example on this blog).

There aren’t too many of these cards in circulation with only four of them graded PSA 10, and another 20 rated PSA 9. So if you can get your hands on a PSA 10, odds are it’ll increase in value. Look for it on eBay and see if you can find any online. 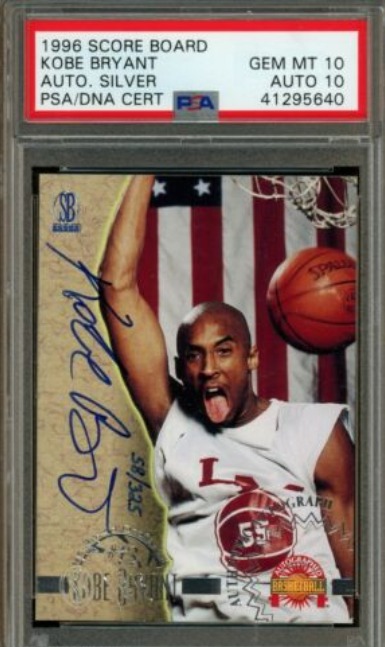 This might be my personal favorite card on this list. To me – this is cool. The pose. The dunk. And that auto is incredible.

(for those of you playing at home, an auto is an autograph)

There were only 325 of these cards made and I could only find four of those graded at a PSA 10. So, to me, that explains the price.

Find the card on eBay. 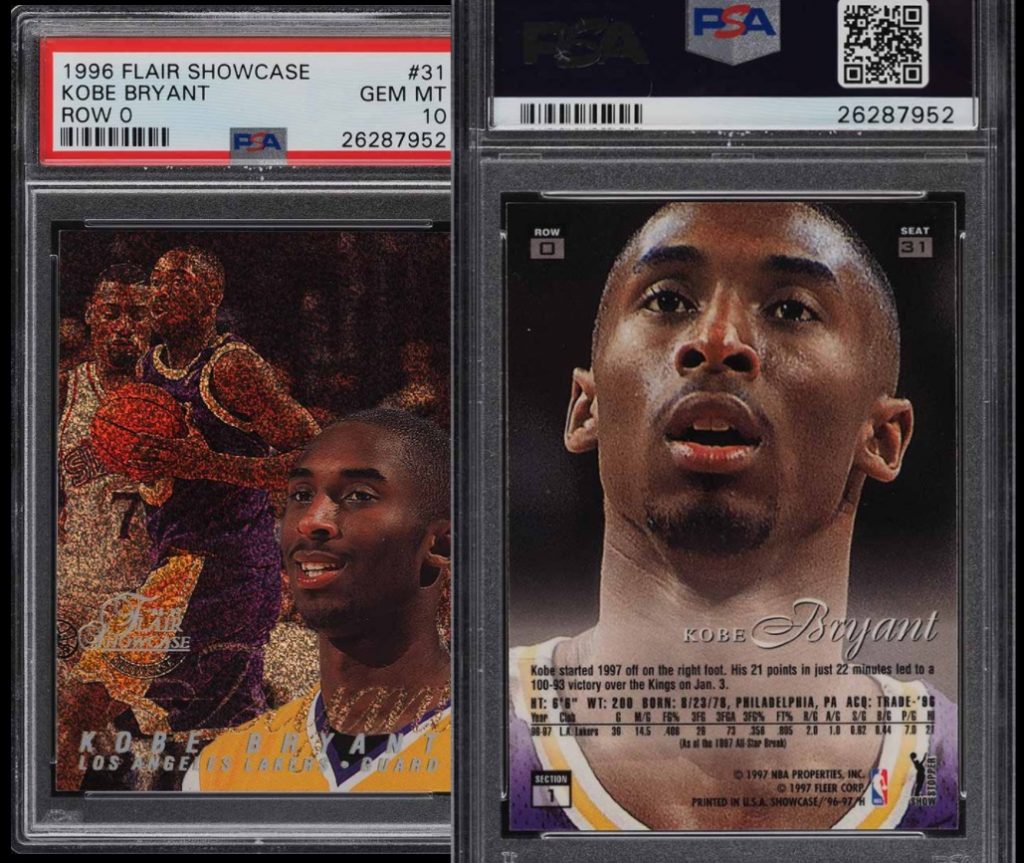 I did a little homework on this card becuse – surprisingly, Flair’s 1996 offering isn’t in my wheelhouse.

They offered three stages of scarcity.

Or, as I’m going to call it- the Goldilocks approach to scarcity

Although, I guess the middle one isn’t “just right”.

Either way, if you can wrap your head around the tiered scarcity, there was still about 150 of these showcase cards in total. These were obviosly outside the base card.

The card looks very 90s but still offers a design that’s different to many others that’ll feature today.

Obviously, those cards are always going to be a pretty sound investment over time. However, we all can’t afford 60k for a basketball card (no matter how cool it is).

So, I’ve done some homework for you, and I’ve found some other rookie cards that could be a good investment.

To make sure we’re getting the best bang for our buck, we’re only looking at cards that are graded on this list.

Sure, if you’re great at assessing a card’s value over the internet, you can buy ungraded cards and then grade them and make an even bigger profit. However, I’d much rather go with the certainty of buying graded cards.

If you’re new to this, you can read our beginners guide to card grading.

With that in mind, you can probably find these cards from anywhere between $1,000 and $2,000. And, as the price for the top Kobe Bryant rookie cards rise, these cards should be taken along for the ride. 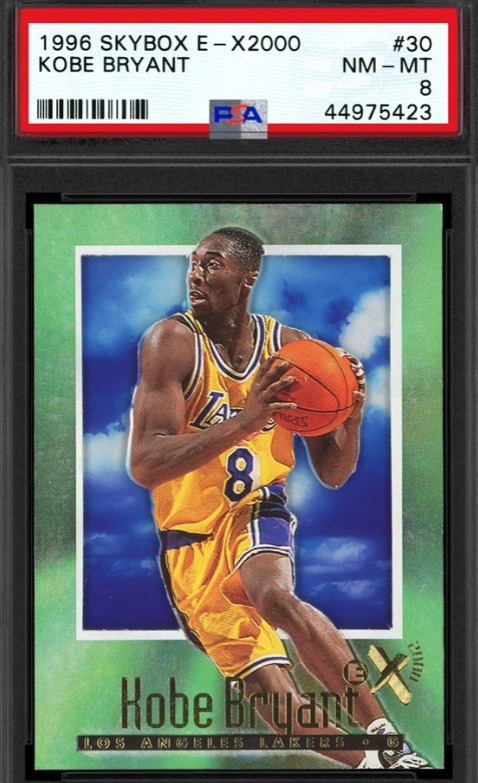 This is the base version to the Skybox card that we mentioned earilier in the post. As you can see, there isn’t a whole lot different about this card. There’s a different color around the edges (green instead of white) and that’s about it.

One thing about these cards though, there seems to be an issue with them losing some of the shine and wearing on the edges – that means that there aren’t many that rate at a PSA 9 or 10. However, on the plus side, it does mean the the PSA 8s are a reasonable price and may actually hold some value – which doesn’t happen all the time. 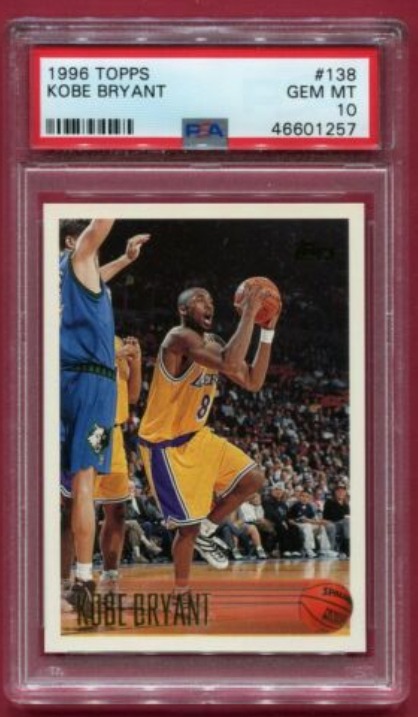 Another base card of one we mentioned earlier. The Topps rookie card is probably the card that people think of when they imaging a Kobe rookiw card.

If you don’t have a spare $80,000 under your bed for the Refractor, you can buy the base at a much more reasonable price.

Either way, this rookie card at a PSA 9 or 10 should continue to rise. 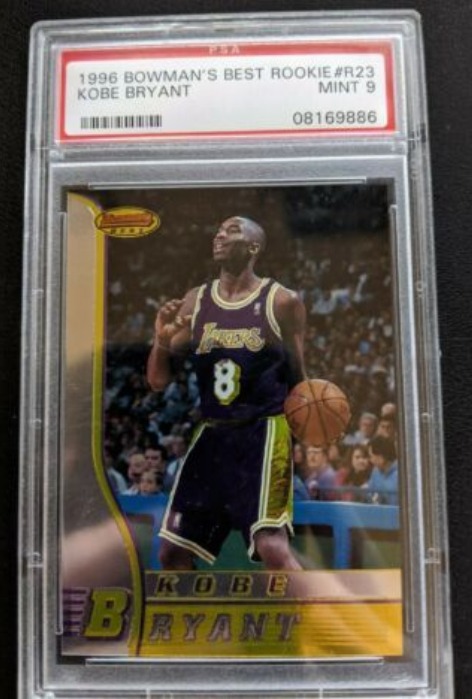 The Bowmans Best card is a classic-looking basketball card which means it should get some carry-over value going forward.

One thing about the mid-90s card… some look a little too 90s. I don’t know if that’ll have an impact on re-sale going forward or not. It shouldn’t, but if it deters some buyers that will impact price.

This card on the other hand, should stand the test of time.

Kobe Bryant cards a good investment. Kobe is one of those guys who should grow in stature over time. He was one of the biggest stars of his generation, and all the people who grew up watching him are now entering adulthood and can will be interested in his cards.

He’s also a Lakers legend, which certainly helps. A big name player who was the face of the biggest team in the NBA is always a solid investment choice.

Which Kobe Bryant Cards Are Worth Money?

Kobe rookie cards are probably the best bet for cards that are worth money. Like any player, rookie cards will be the best investment. No matter how many years someone plays in the league, they only have one rookie year. So that means they’re easily the hardest to find.

With that, limited print rookie cards are worth even more – these are cards that were only printed a few hundred times and over the years those cards were destroyed, were lost etc… Now, those cards are the ones that get top dollar.