Allen Iverson, or “The Answer”, as he was nicknamed, was one of the best players of the late 90s/early 00s along with guys like Kobe, Tim Duncan and Kevin Garnett.

Iverson has some great rookie cards that you should be looking at if you’re a fan. 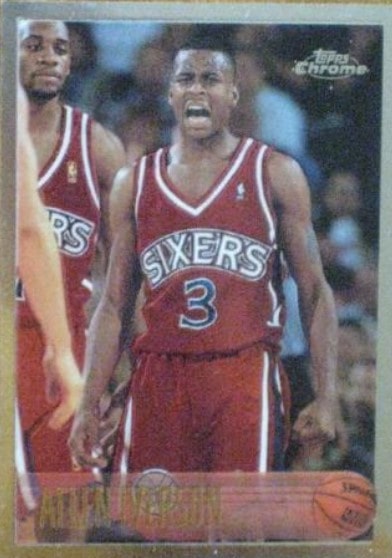 1996/97 Topps Chrome is the most popular Allen Iverson rookie card. It is THE GOAT of all rookie cards of this player who was known for his offensive wizardry. The base version of this card is made of chromium, which is slightly different than most other cards you’ll find of Iverson.

There’s a certain appeal for that material, though. It just oozes class and it gives the card a premium feel. Additionally, the card is not very widely available as most other rookies are. It’s not the rarest card in the world, but certainly not as easily available as the rest of his cards.

Back in 1996, Iverson was tipped for greatness. He was the no.1 pick for the 76ers in the 1996 NBA draft, despite his troublesome past and early life. And all that hype was worth it in the end, as Iverson managed to win Rookie of the Year in 1996/97. This is just another reason why Iverson rookie cards sell like crazy, even today.

The base Topps Chrome card is quite expensive itself, but if you want to go one step further, you can look for the Refractor parallel of this card, which looks like this: 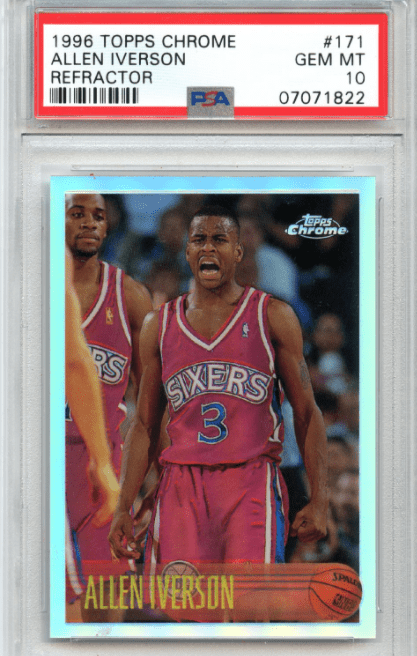 This Refractor parallel is by far the most expensive Iverson card, and also one of the most expensive basketball cards overall from the 1990s. It will cost you several thousand dollars to get it, although, with depleted quantities and a scarce market, you could be looking at much more than just that. 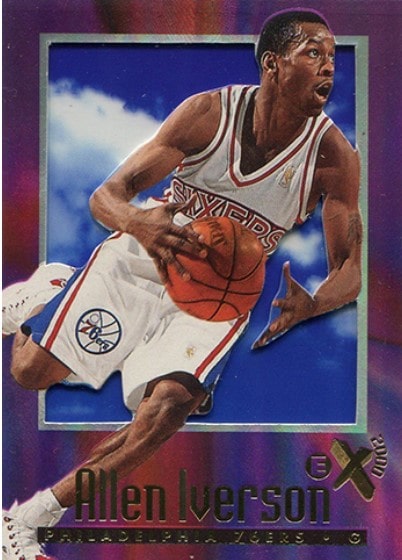 The Skybox E-X2000 Allen Iverson rookie card is the next best thing when it comes to rookie cards of this 76ers legend. In terms of value, it’s right behind the Topps Chrome cards, although it’s still easily attainable nowadays.

It’s much more widely available on the marketplace today compared to the Topps Chrome rookie cards. That’s why it’s perhaps a bit less expensive, but make no mistake: this Skybox card is still a great-looking card.

The card is very different than most of the other rookie cards, which is why the appeal is so huge for it. It has a very colorful and bright design with clouds in the middle, and it just works.

Today, this card will sell well although you’ll find many of these on the market. A lot of them are ungraded, which means they’ll be a bit cheaper but you’ll compromise on certainty a bit. If you do opt for an ungraded card, make sure you watch the corners – these cards were notorious for having corners that easily got clipped.

There’s also a Credentials parallel for this card which gets rid of the rainbow-like outer border of the card and uses white there instead. 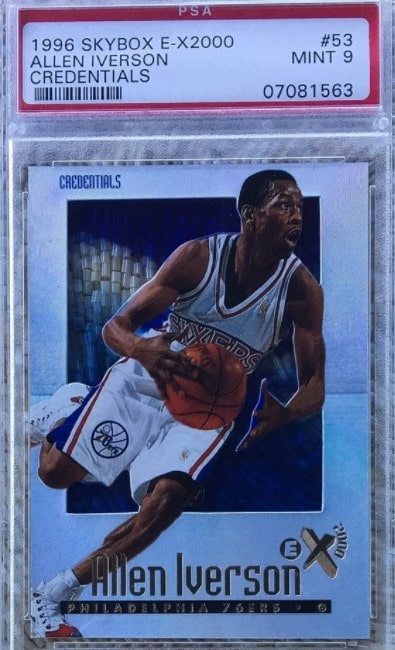 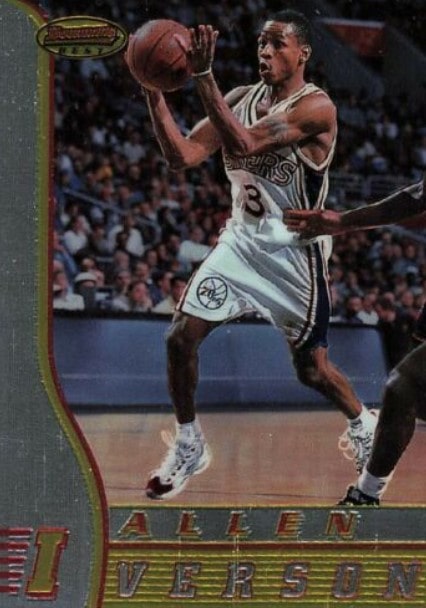 The Bowman’s Best Allen Iverson rookie is one of the most appealing options for card collectors. In addition to its chromium stock, the card features a large image with the stands clearly visible in the back, and with Iverson in his typical move towards the hoop. Looking at the card today, it’s the image that makes it so elegant and loud at the same time.

The card is susceptible to stock damage and smudging, so be careful when choosing your card. It should still not be the most expensive card in the world, as it will cost you several hundred bucks – or potentially more if you find a PSA 10.

Again, there’s a lot of ungraded cards listed, so you might be able to get yourself a nice bargain. Even though it doesn’t have an autograph, this design was believed to be one of the turning points back in the 90s as more and more cards implemented this style and type of design. 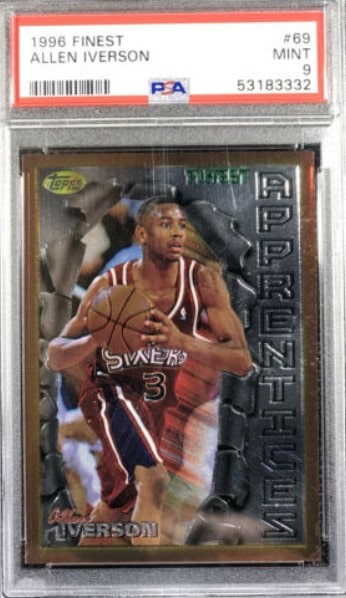 Next up, the 1996/97 Finest Iverson rookie card. Back then, this card was a bit like marmite: some loved it very much, while others hated it. And you can see why. It is a chromium card with a very graphically-advanced look for its time. This particular card is the Apprentices version, although there were another two variants: Sterling and Heirs.

All of them are today remembered for their advanced looks, although the Sterling variant is perhaps the most tuned down: 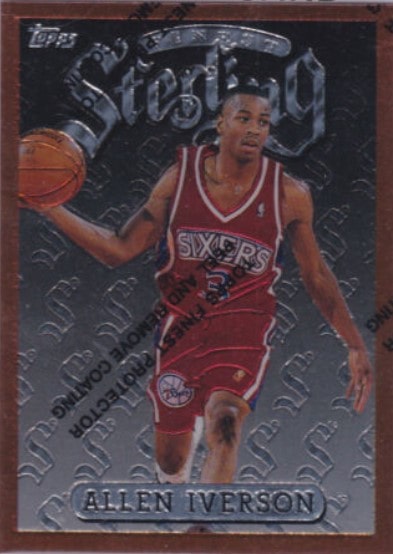 It is the Apprentices variation (#69) that was the most popular, though. Today, these are all still widely available where #69 takes the top spot in terms of price, closely followed by Sterling and Heirs. 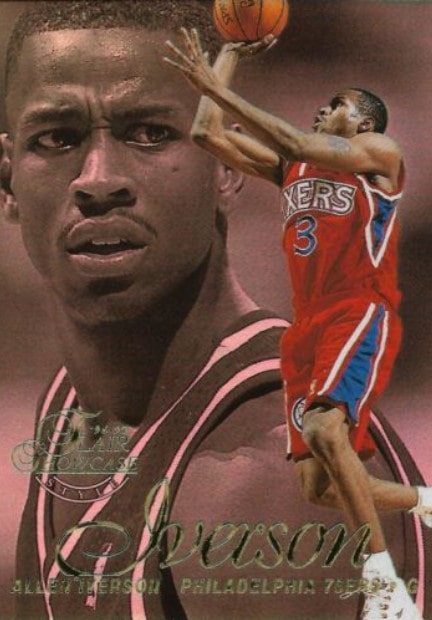 This Flair Showcase rookie card of Allen Iverson is for those who love image-heavy cards. The main features of this card are his images – one is the frontal image of Iverson’s face, while the other shows an Allen Iverson in full flow.

An interesting fact about this card is that it had a row-based design that would determine the rarity of the card, and thus its price. The Row 2 card, as seen in the above image, was the most common card and thus the least expensive. Row 0 was much rarer and hard to get, so it was a bit more expensive.

Note that these Rows are not parallels, but rather different cards with a slightly different design. When it comes to parallels, this base card had one parallel which was the Legacy Collection, and it had 150 cards printed altogether.

The 1996/97 Fleer Iverson card was the go-to card for the everyday collector. It was one of the best entry-level cards that you could get of Iverson for cheap. It was made commercially and it was widely available in Fleer packs, so it was not as expensive nor as rare as some other cards we’ve featured so far.

But there’s something a bit peculiar about this card. Namely, the image on the card will baffle some of you. It looks as though Iverson is passing the ball to the teammate, but then again, he might just be dribbling with it behind his back. Once you examine it closely though, you’ll see Iverson attempting a pass behind his back.

The Fleer card is not hard to find nowadays. You’ll be able to get one for a relatively cheap price, and it’s still considered to be an entry-level card for those who are on a budget. It’s not a bad card by any means, though, and perhaps a decent little investment for the future. 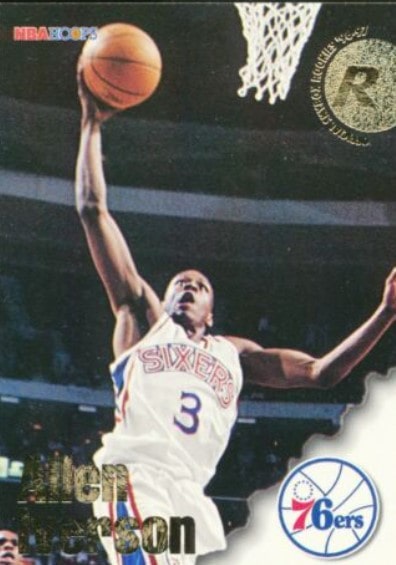 Here’s another great card to own if you’re on a budget: the NBA Hoops 1996/97 Allan Iverson rookie card. Ever since the 1980s, Hoops was one of the most recognizable brands when it comes to basketball cards from the NBA. Although it was later outsold by most other big companies like Topps, Fleer, Upper Deck, and others.

Get this card if you want something really cheap and easy to get. There’s nothing especially remarkable about it other than having Iverson on it, which is a plus on its own. 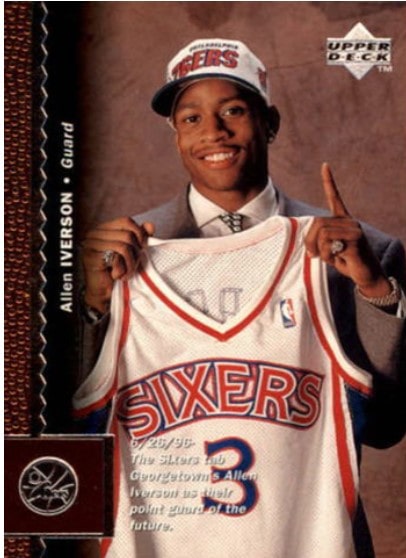 This is a card with Allen Iverson and his wide, shiny smile after being picked as a first pick in the 1996 draft by the Sixers. There’s just something special about this image, and it makes the entire card worth it.

You will probably not have any problems finding this card in a good condition, and it also won’t cost you that much. There’s also an interesting description on the card with a date of his draft, which adds a little extra something. 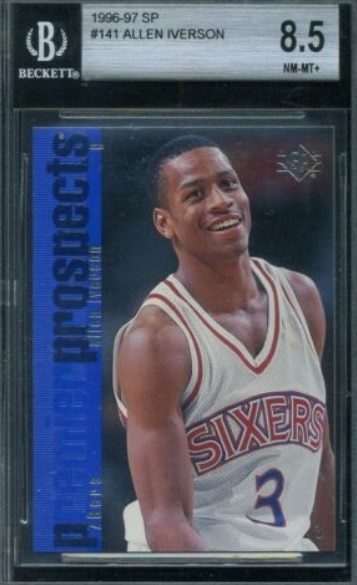 This SP card was one of the more premium cards back in the 1990s, although it loses a bit of value today because of the many more advanced premium cards we have. Still, it can cost several hundred dollars in top condition.

The card looks nice, although the blue banner on the left might turn some people off. It’s a nice Iverson rookie card to own nevertheless.