Short for his position, Sir Charles was a tenacious rebounder and scorer.

People might remember Barkley as the out-of-shape joker on TV, but don’t sleep on his athleticism as a player. He was extraordinary.

I love Sir Charles, and here are some of his best cards for collectors.

There’s one main option you should take a look at as a true rookie card, although there are some additional cards that can be considered as such. 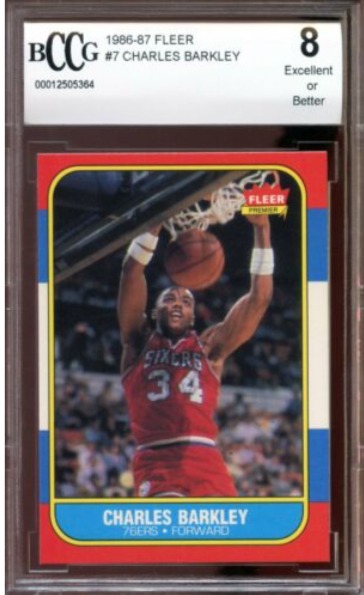 This card from the original 1986 Fleer package is considered as the first and only official Charles Barkley rookie card. Among card collectors, this card is also the most valued – a card like this will not lose value any time soon.

At the time, Barkley was one of the up-and-coming power forwards in the league. But this card is part of a Fleer set that included Hall of Fame players only. It finds itself in the company of cards such as MJ, Patrick Ewing, Karl Malone, Hakeem Olajuwon, and several others.

Within the set, Charles Barkley’s card is #7. And even though the cards were printed heavily back in the 80s, the Charles Barkley rookie card is somewhat rare…

The card itself looks nice, too. It’s got a red, white, and blue border with a photo of Barkley in the middle, in a typical move of his that made him the powerhouse that he was. Flip the card over and you’ll find some of Barkley’s stats from the previous seasons (which is always interesting to look at).

If you can get your hands on one of these, it’s definitely worth an investment if you’re looking for a good ROI in the future. 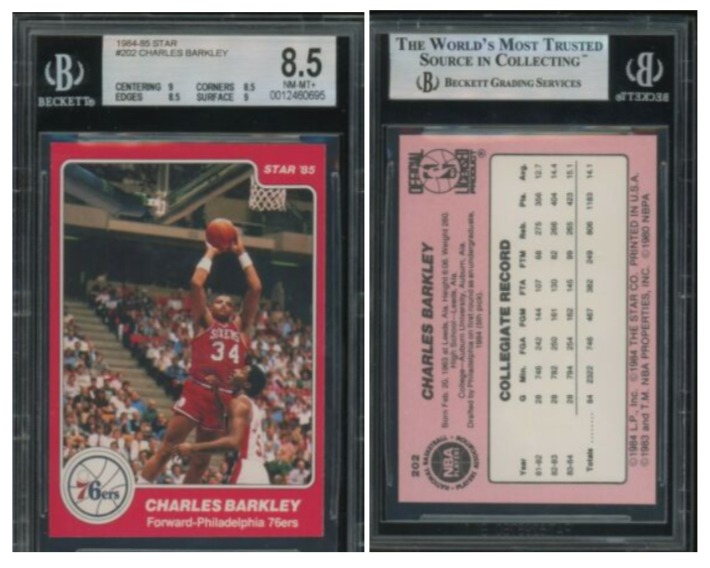 If you can’t get your hands on one of the cards from the 1986 Fleer set, then the 1984 Charles Barkley Start RC is the next best thing you can consider.

Even though PSA won’t grade these cards anymore, they’ll still cost you several hundred bucks to buy (if in good condition). The Star Charles Barkley cards span from 1984 to 1986, although it’s the 1984 card that’s the earliest edition of a Charles Barkley card.

One of the potential issues with this card is centering, which wasn’t as widely vetted back in the 1980s. But then again, it’s also what makes these cards so unique and special.

The card has a red border with an image of Charles Barkley soaring high in the center. He’s wearing his #34 Philadelphia shirt. In the left bottom corner, you’ll find the Philadelphia 76ers logo, while on the bottom, you’ll find Barkley’s position and team.

On the other side of the card, you’ll find a brief description of Charles Barkley and his career record so far. Nothing special, but it’s what makes this card more complete. You can still sell one as they’re always in demand, especially in good condition. 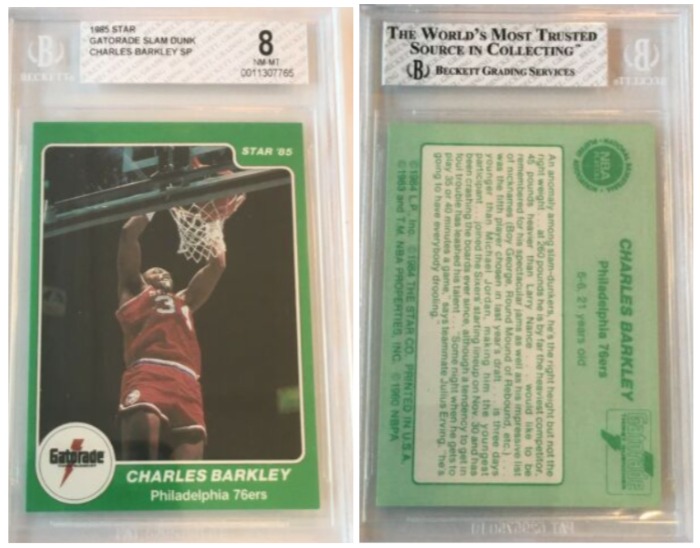 The 1985 Star Gatorade Slam Dunk Charles Barkley rookie card is also a worthy investment. It’s his first outing in the slam dunk contest, as he was just beginning to develop his own dunking style.

Even though it’s not the most prestigious of Barkley rookie cards, it’s still worth taking a look at as it’s somewhat unique. It’s got style, that’s for certain. I like the green border on the card and the Gatorade sign makes it feel different.

The design itself is similar to the above-mentioned Star card from 1984. However, the main difference here is that the Gatorade logo replaces the 76ers logo. The back of the card is also different here.

If you read the description closely, it’s talking about Barkley’s dunking style and how he’s different from other slam dunk contesters.

Again, the design of the card is a bit polarizing – but if you like it and you want a card that’s a bit different, go for it!

There are a bunch of other Barkley cards out there thought that aren’t from his rookie season. 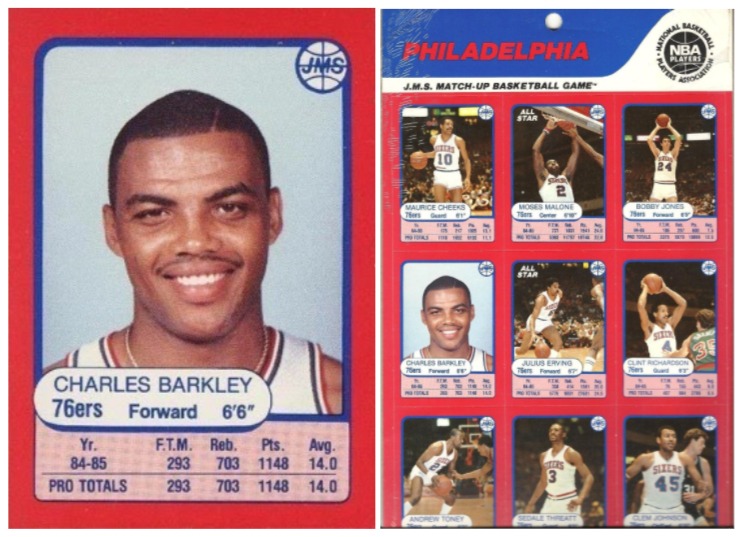 The card is a part of a package of cards that featured the entire top three NBA teams – the 76ers, the Lakers, and the Celtics. It’s interesting to see the team of 76ers of that season which had some interesting players like Malone and Cheeks.

On the bottom of the card, you’ll see Barkley’s stats from the 1984-85 season. It has a thick red border and a frontal photo of Barkley’s face on it. It’s not the most valuable card in the world but if you’re a Barkley or a 76ers fan, then this card can make a nice addition to your collection.

Charles Barkley is one of the most respected power forwards in the history of the NBA. He was widely considered to be the best power forward in the league during his time at 76ers, or at least one of the best.

He was not known for his height – his official height was 6’6’’, although some suggest he was “only” 6’4’’ – which for a power forward, is not the tallest. But he was renowned for his powerful style of play which led him to become a Hall of Fame player.

If you’re looking for a good investment, then the Fleer 1986 Charles Barkley Rookie Card most likely represents the soundest investment you can make on this rookie card. Even though it’s still widely available, it’s also one of the hottest rookie cards you’ll get your hands on.

Alternatively, the 1984 Star Barkley Card is also worth looking at from an investment point of view. If it’s in the right condition, it can reach a value of up to several hundred dollars, if not even more.

Though if you’re just an avid collector and you just want some Barkley cards from his early career, the Gatorade and the JMS cards would both be interesting additions to your collection.