It doesn’t matter what your thoughts about basketball are, MJ arguably the greatest player who ever played the game.

Hell, he even literally saved the planet in one Space Jam documentary I watched.

I’m not going to get into an LeBron debates here, apologies.

However, in this article, we will look at Michael Jordan rookie cards. Also, it’s important to know that we’re talking about basketball only. You can read our article on Michael Jordan baseball cards if you want to know more about that. 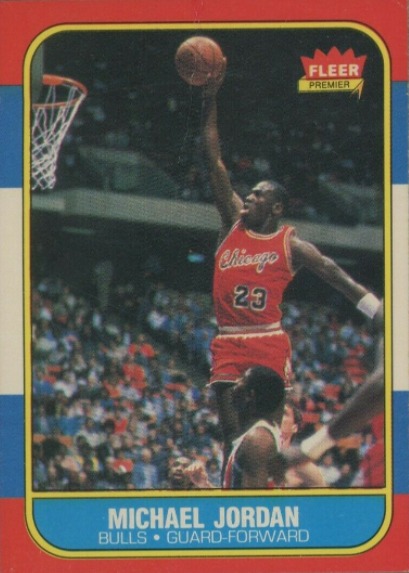 Okay…. it’s not technically his rookie but ask any basketball card collector to close their eyes and picture a Michael Jordan rookie card and I bet you this is the card that they imagine.

It’s pretty crazy what a play like MJ can do to the card market. These packs were actually kind of a flop when they first came out and mass-produced. Now – all these years later, they’re worth an absolute mint.

People are even getting the packs graded! 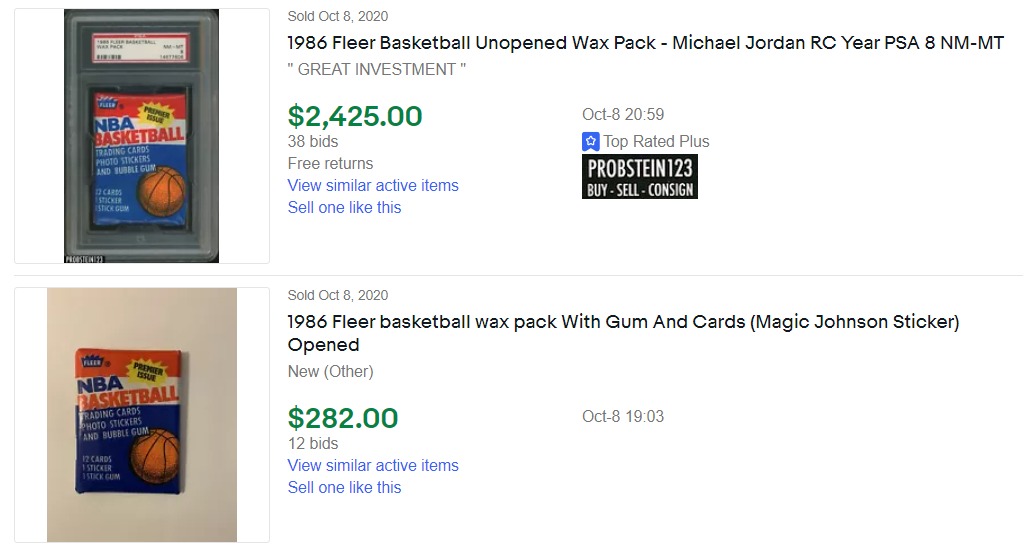 The card itself is an absolute beauty too.

I love the photo on this card, MJ dunking like that is iconic throughout his career so to able to capture than on a rookie card is special.

Part of that “close your eyes and imagine a MJ rookie card” aspect comes from the card’s boarder too. The red, white, and blue is pretty special and sticks in the memory of collectors everywhere.

This is one of the most expensive basketball cards on the planet for a good reason. 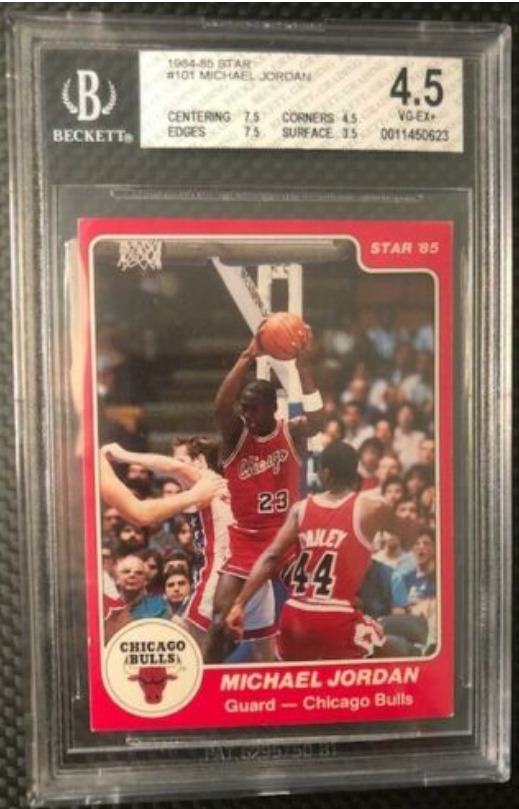 While Fleer gets the rap as being the first Jordan cards, that’s actually not true.

Actually in that set, there were three Jordan cards. There was the rookie card above, a ‘rookie of the year’ card, and this Olympic games card too. 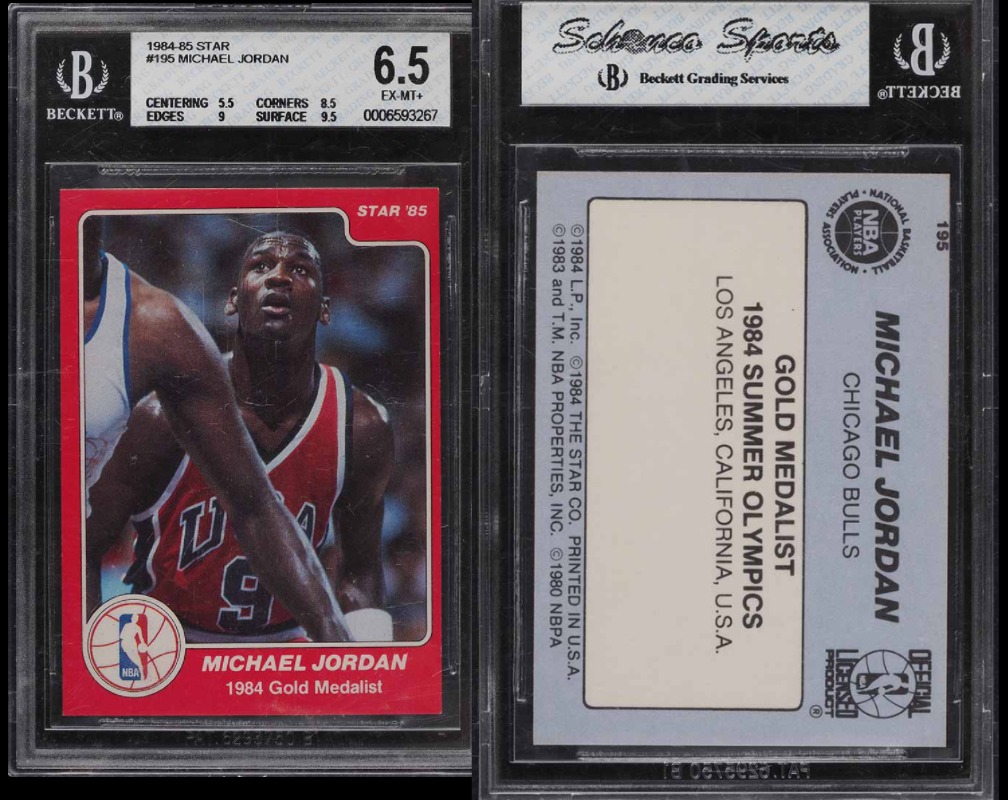 While Fleer cards were mass-produced for retail, the Star cards had a way smaller print run and were mainly sold to hobby shops.

They’re a lot harder to come across than the Fleer and are the earlier card.

So, why aren’t these cards way more popular?

Well, there’s a funny story about that.

Actually, “funny” is the wrong way to say it.

One reason the cards aren’t as popular or as iconic as the Fleer set is that it turned out that throughout the 90s, the original owner of Star cards was printing new cards but backdating them to say that they were from the 80s.

These counterfeit cards – for lack of a better term – were sold as new and started circulating their way around the hobby.

So, as you can imagine, they’re pretty hard to distinguish as being an original or a reprint. Not many grading services will touch these cards anymore for that reason too.

If you can get your hands on an original though, they’re a great find. 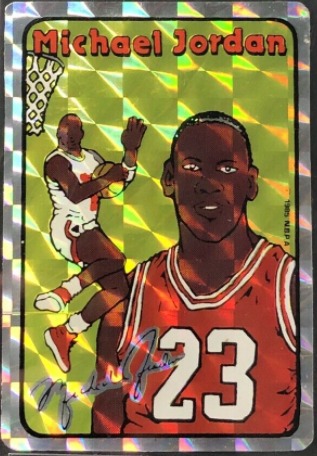 Seen one of these bad boys before?

I’ve added this as the third and final Jordan rookie card because it’s definitely something different. It’s, to my knowledge, the hardest MJ rookie to find for re-sale.

This Michael Jordan rookie is actually a sticker, not a card.

If you don’t know much about sticker, I’m your guy. I’m a soccer card and sticker collector first, so I know a bit about the product. Here’s some reasons why it’s harder to find the stickers.

On top of those reasons, these stickers were sold out of vending machines in stores and not hobby shops, so they didn’t have a massive print run like a lot of other cards of the time.

In fact, there’s only 86 of these graded at PSA as of the time of writing, and I can’t imagine that number getting too much bigger anytime soon.

How Much are Michael Jordan Rookie Cards Worth?

Michael Jordan rookie cards are arguably the chase card in basketball cards. At the end of the day, depending on your stance on the sports, it’s pretty hard for me to fathom anyone honestly having MJ outside their top two or three players of all time. Most will have him number one as someone who’ll never be topped – and with good reason.

With that in mind, Michael Jordan rookie cards are worth tens of thousands of dollars. For a highly graded Fleer, you’d be looking to spend well over $70,000, as that was the sale price in July 2020.

These cards are always a great investment opportunity, especially if you’re after a long-hold.

How To Spot a Fake Michael Jordan Rookie Card

With a card that’s as iconic as the Michael Jordan Fleer rookie card, there’s a lot of fakes.

As a shopper, it’s up to you to know which is which. Just check this out…

While there’s some obvious differences when you’re looking at a real and a fake next to each other, it doesn’t mean that it’ll be that easy if you’re only looking at a fake MJ rookie card.

Still, there’s a few things to look out for:

Here’s a few things to look at shown in an image, you can save this to your computer or phone if you’re ever looking at buying a Michael Jordan rookie card. 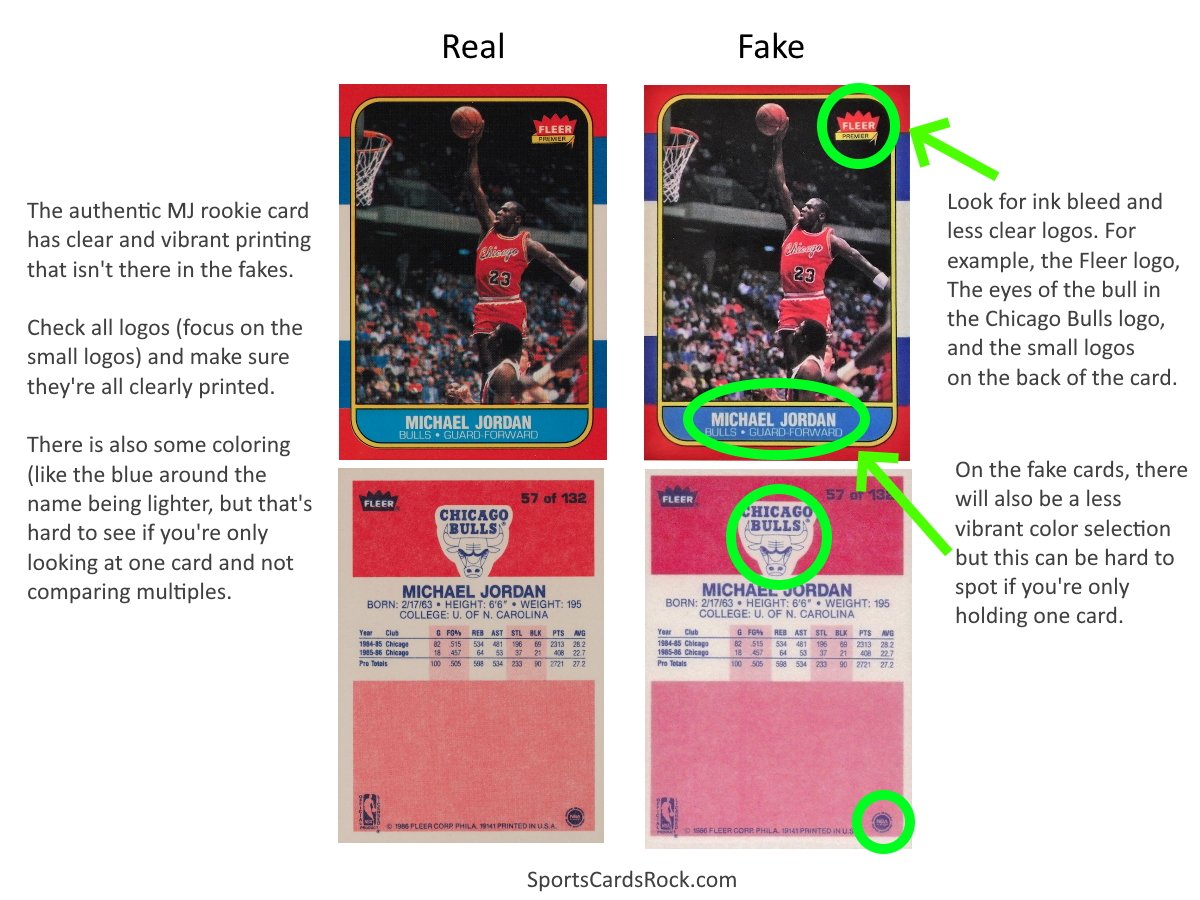 The beauty of Michael Jordan cards is that they’re all worth something compared to the other cards in the set – Even more than his sparring buddy and teammate, Scottie Pippen.

In fact, I know a bunch of people that make good money and only sell Jordan cards. Basically, they find cheap wax (unopened boxes) from MJ’s playing days, and get every good looking Jordan graded.

Michael Jordan is arguably the best NBA player of all time, and his cards will always be a collector item.

It’s a boring strategy, but honestly, if you had a decent amount to invest in NBA cards and wanted something safe long-term, I’d point you towards Air Jordan.

A true must-have for any collector.

Here are some related articles that you might find interesting.