If you know absolutely nothing about baseball, you’ve still probably heard of Babe Ruth.

In this article, we’re going to look at some of Babe Ruth’s rookie cards, and top cards for investors to buy.

Cards from the 1910s and 1920s tend to have a lot of value, but Babe Ruth’s baseball cards from that time are even more valuable. Let’s see what Babe Ruth baseball card you should be looking at and which card of his is considered as the best. 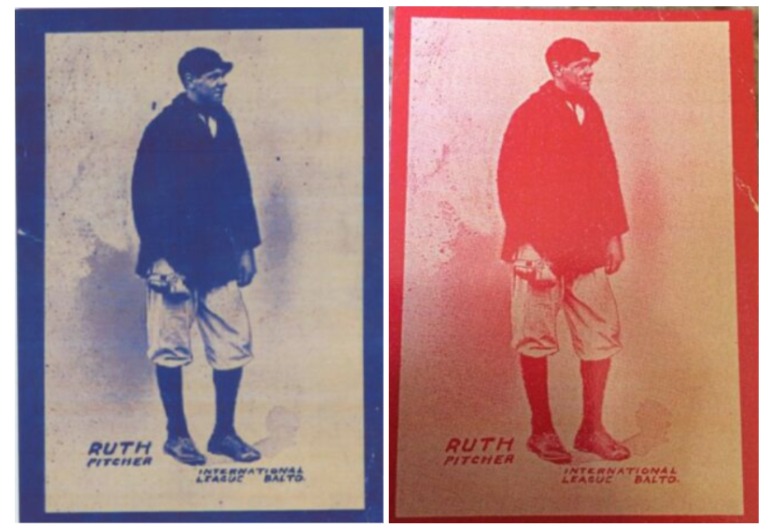 In 1914, Babe Ruth started playing ball with the Baltimore Orioles in the Minor League, which was a league that was known as the International League. He was spotted by the owner of the team, Jack Dunn, and given his debut in March of 1914.

Soon, he established himself as the up-and-coming star of the team. Many senior players at this team pranked Ruth often and even called him “Dunnie’s Babe”, which is where his nickname is thought to have come from (although almost all rookie players got the nickname Babe at that period in time).

Babe Ruth quickly established himself as the star of Dunn’s project to become the best team in the league. However, Dunn’s team ran into financial problems before Ruth had to be sold to Boston Red Sox (for record money at the time).

As the best player of the team, Ruth’s talent spread around the country like wildfire. Already at that time, many people struggled to get the 1914 pre-rookie card of Ruth, although there were not many people that would’ve predicted Ruth’s rise at the time.

This card comes in two variants: blue and red. It was available from the Baltimore News newspaper, where cards of local players were available when you bought the newspaper.

It’s Ruth’s earliest known card, and also his first card from his professional days as a baseball player.

Today, you probably won’t find this card in mint condition – but if you do, you’ll need to fork out a small fortune of several hundred thousands of dollars. It is probably worth even more than Babe Ruth’s true rookie card from 1916 – firstly, because this one’s rarer, and secondly, it’s from his early playing days, so many people like this one even better. 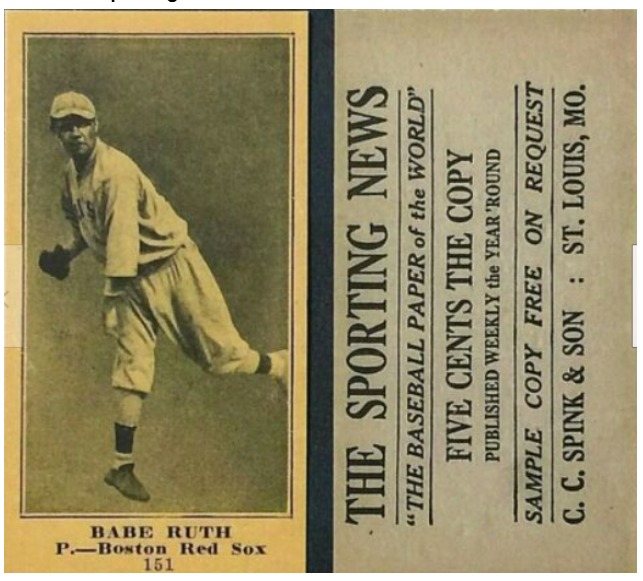 This card’s seen by many as the true Babe Ruth rookie card, although it’s not his official rookie card. It’s the second-earliest available card of this legendary player, and perhaps one of the most significant ones in terms of value for baseball fans and card collectors alike.

A card just like this one was recently found lying in an old piano that was bought for a mere $25. The card was hidden behind the pedal, and it was probably not touched for decades. The card was rated as a BGS 2.5 – but nevertheless, it sold for $108,378, which is an astonishing amount – although not surprising at all.

Again, you probably won’t find this card today – at least not the official version of it. You might find some reprinted versions, which of course, you should be aware that they are not the original versions of the card.

The card was originally a part of The Sporting News set of cards, which was a weekly baseball newspaper that often featured baseball cards of MLB players. You had to be lucky to find one in 1916, as Babe Ruth was already an established pitcher with the Boston Red Sox.

The Babe Ruth rookie card from 1916 is one of the most popular and sought-after cards for card collectors. Not many can afford it, though. And you also won’t find a listing easily. It’s also very likely that you might find one that you like, but it’s highly likely that the card will not be in the best of conditions. 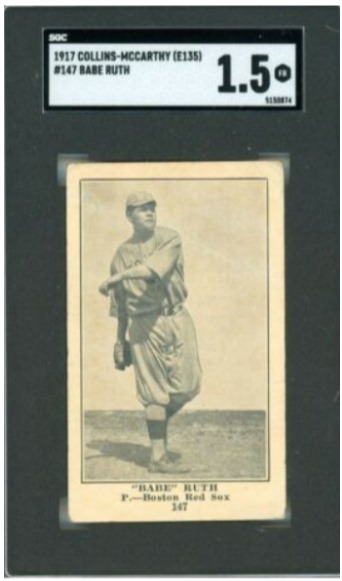 The 1917 Babe Ruth card is also one of the hottest cards for card collectors. Even though it’s not his rookie card, it’s still worth a small fortune.

It was in this season that Ruth started to establish himself as a hitter, although WWI prevented the league to be played out normally. Although for the majority of the season, Ruth was still used as a pitcher, which was not the position Ruth preferred.

On the card, he’s still shown as a pitcher, although he soon became one of the best hitters in the league after hitting record home runs – which at that time, were considered as near-impossible.

This card from 1917 is among the best Babe Ruth cards you’ll find, and also one of the most popular ones. They’re still rare, although arguably not as rare as the 1914 and 1916 cards. The Collins-McCarthy Ruth Babe cards from 1917 have a glossy finish, so they’re more susceptible to cracks and tears.

So finding one in good condition will be tough – almost impossible, you could say. So when they come on sale, they’re normally bid on and snapped up quite quickly. Unless you find it yourself, you probably won’t be able to get it (Hint: look at your grandma’s old piano 🙂 ). 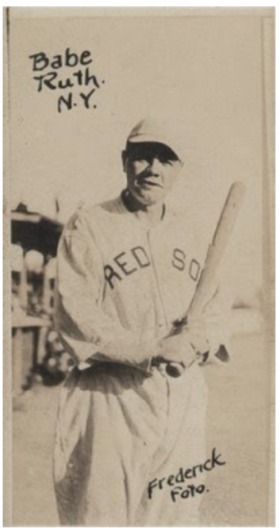 This one’s not so much a card, but rather a collectible. It’s not one of the most commonly viewed Babe Ruth cards, but still incredibly rare. You’ll do well to even find a listing on eBay, for instance, let alone find one for a reasonable price.

In 1921, Ruth was already a member of the NY Yankees, although interestingly, he still wears the Boston Red Sox apparel in the photo. The photo quality is one of the best features of this collectible.

Because of its rarity, this piece of memorabilia deserves at least a mention on this list of the best Babe Ruth cards. 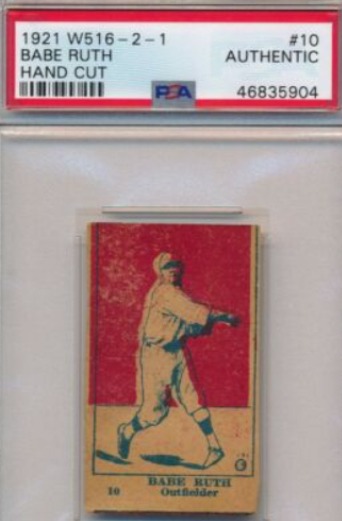 Another Babe Ruth card that’s hard to come by. This 1921 card comes from the W516 set that featured 30 cards altogether, and they had a more artistic look to them. The Babe Ruth card is arguably the best and most valuable card of this particular set.

The card is quite small, too. It has thin borders with the player’s photo in action. The background is typically red, completing the artistic look the card has going for itself. The back of the card is blank.

It’s not everyone’s cup of tea, this card. However, purely because the card is extremely rare, you will do well to find one that won’t cost thousands of bucks. Even though it does not have a real photo of Babe Ruth in action, it’s still a highly sought-after card.

Though if you prefer more realistic cards with real cards of players, this one might not be for you. It will still go down as one of the most iconic Babe Ruth cards in history, though. 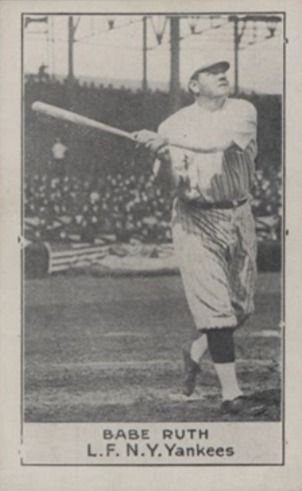 National Caramel released this card in 1921, as a part of a 120-card set that featured some of the most iconic baseball players in history. Babe Ruth’s card was obviously the showpiece, although the set also had some great player cards such as Ty Cobb.

In 1921, Babe Ruth was already a part of the NY Yankees team where he spent most of his career and really established himself as one of the best players in history – arguably the greatest ever.

It’s also one of the first cards where Babe Ruth is depicted in action with a background that shows us a full stadium in the background. This card from 1921 is not easily found, because they are quite rare and often, not in the best of conditions. Only a couple of dozen of these cards were even printed back then, so they’re even rarer today. 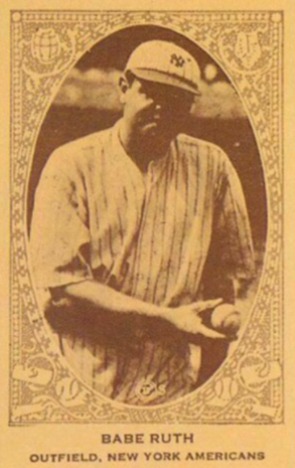 At the time, American Caramel released one of the largest batches of cards – as they printed out 240 of these cards in 1922. The main distinguishing feature was the intricate design of the border, which was quite unique for those times.

Another interesting thing about the card is how it says “New York Americans” as the team was sometimes referred to back then – instead of NY Yankees. The photo is quite simple, though, although not very clear. Ruth’s pictured holding a baseball, where his face is obscured by the shadow.

You’ll find many reprints of this card today, but not many originals. It’s understandable since most of the 240 printed cards are either lost in time, destroyed, or already owned by avid card collectors. 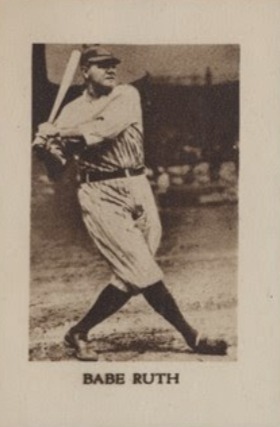 The 1929 Babe Ruth card comes from his peak days with NY Yankees where he was already considered as the best hitter ever at the time – and that would not change much for almost a hundred years.

It shows Babe Ruth in action hitting a ball with his powerful strike. A surprising fact about this Star Player Candy set is that it only had two well-known players in it – Ruth and Gehrig, while most other cards featured players that were not as famous. Still, the Babe Ruth card is among the most valued baseball cards in history.

An interesting feature of this card is the short bio on the back of the card – it was one of the first sets to feature this. 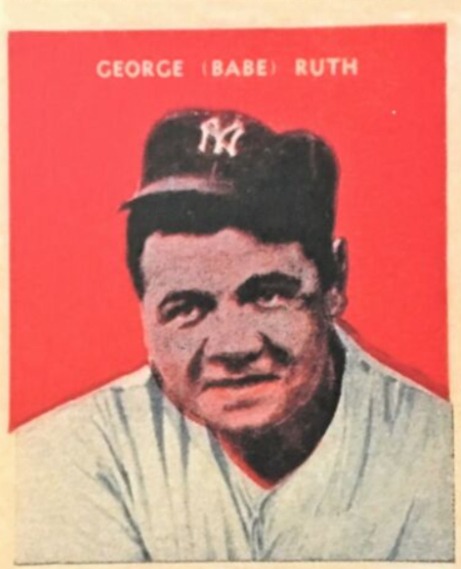 The #32 card from the iconic 1932 US Caramel set is perhaps one of the best pieces of collectibles ever. This set was known for its collection of stars that it featured, including several stars from boxing, golfing, and baseball. And Babe Ruth was the spearhead of that set.

The profile shot of Babe Ruth shows the player’s character – relaxed. The “Bambino”, as Ruth was commonly referred to, was in his latter stages of his career at the time, but still one of the biggest sporting stars in the country.

You’ll do well to find this card in decent condition because most are found in lower grade condition nowadays. The red background stands out nicely with the card, and really lets Babe Ruth’s face pop out.

The 1933 Butter Cream set is known for its tall card designs. It’s also one of the rarest cards of Babe Ruth. Only a few of these cards remain today, so you probably won’t be able to get one (at least not an original one).

The photo on the card is a portrait of Babe Ruth, although surprisingly, most other cards from this set feature players in their action pose. It’s definitely one of the most iconic Babe Ruth cards out there. 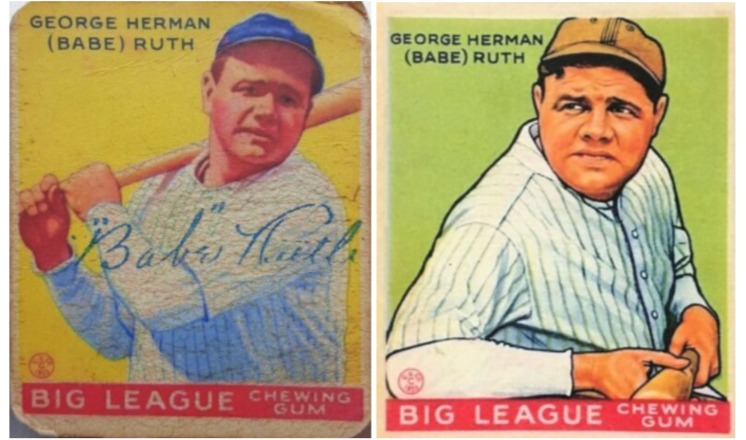 The Goudey cards of Babe Ruth are among the most recognizable cards of this player. They were present as a part of the package with Goudey chewing gums, and they quickly became popular as collectibles.

There were four variations of this card – the main difference is in the background of the card, while three of them feature Ruth in the same pose (except for the green one). #144 shows “the Sultan of Swat” in the field, while all other cards are portraits of Ruth.

Finding any of these cards will prove difficult for you, which is a common theme for all Babe Ruth cards. Although the yellow card from this set is arguably the most valuable one. The red one is also very popular. 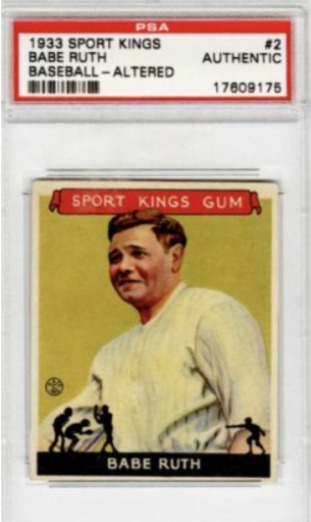 The 1993 Sports Kings card is one of the most popular Babe Ruth cards because of its unique design. It’s part of a large set of cards that contained sports stars from other sports, including football, golf, boxing, basketball, and other sports. Again, Babe Ruth was among the leaders of this pack.

The card features a smiling Babe Ruth on a light green background, with an interesting design that has some action figures depicted on the bottom of the card. Again, this card can cost several thousands of dollars if in good enough condition.

As you can probably imagine, there’s a countless amount of top products and collectables for Babe Ruth.