Nolan Ryan is one of the biggest names in the history of baseball. In this article, we’re going to look at the best Nolan Ryan rookie cards, as well as other cards of his you an buy.

Nolan Ryan’s official MLB debut came in 1968, which marked the start of an epic journey in the league. The most notable card will be from that year, so we’ll focus mostly on it, although there are many cards from later parts of his career, too. 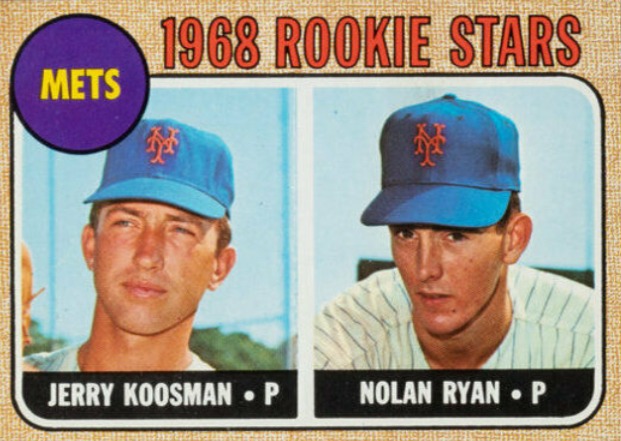 This is the one. The only officially recognized Nolan Ryan rookie card. Ryan shares this card with Jerry Koosman, a teammate of his from his NY Mets days. This might be a bit unusual, but back then, the card collectors were not spoiled for choice as we are today.

Another potential issue is that the card is laid out horizontally instead of vertically, which is typical for most cards.

But despite those issues, this card is one of the most sought-after and desired cards from the 1960s.

Why is it so Valuable?

Because this card is the only official rookie card of one of the greatest MLB pitchers in history. Not only that, but Ryan’s career in the league spanned for almost four decades, and this card signifies the start of it all.

And with that said, the card obviously commands a high price. Despite the fact that this card has a double player design and is turned horizontally, it’s one of the most valuable pieces of memorabilia from the 1960s. Getting a hold of one of these is not going to be easy, then: you’ll need to be prepared to spend substantially to get one, and finding one in good condition is challenging, so the price will naturally only go up.

The card is a must-have for Nolan Ryan fans, for Topps collectors, and for retro card lovers; also, for almost anyone who appreciates the career that Ryan had.

Who is Jerry Koosman?

If you’re wondering who the guy next to Nolan Ryan on the card is, let me give you some background.

For hardcore MLB fans, Jerry Koosman will probably be a familiar name. He was an important player for NY Mets and later for the Minnesota Twins, as well as Chicago White Sox. He too, had a long career – over 20 years.

As a pitcher, he achieved more than 2500 strikeouts in his career – although not as much as Ryan, he was still a formidable player.

So even Koosman was a huge player for the NY Mets as they won the World Series in 1969. That’s why Koosman is actually an added value to the card, even though some collectors might not want to have two players on Ryan’s rookie card.

Other Variations of this Card

You’ll be surprised to know that despite the scarcity of this card, there were two other variations of it released in other countries. Those two countries are Canada and Venezuela, and these are even tougher to find, and thus much more expensive.

The Canada card is from O-Pee-Chee, a confectionary company that also released cards that were authorized by Topps. Overall, the card is the same as the Topps version – the only notable difference is that it says it’s printed in Canada on the back of the card.

The Venezuelan version is even rarer than the Canadian one. But this card is often found in poor condition because these cards were printed on lighter stock, so the card was not as durable. But even in mediocre condition, Venezuela Nolan Ryan cards from 1968 can sell for dizzying amounts of money.

Another version we must mention is the Milton Bradley version. Milton Bradley was a board game company, and they entered the market with card game competitions – the Topps Nolan Ryan one was a part of it, too. The card is mostly the same except for some minor differences – still notable for keen collectors.

So that covers the most notable Nolan Ryan rookie cards – but there are plenty more cards of this player that you should have a look at – some of them here will be rookie cards, while others will just be cards with a great value. 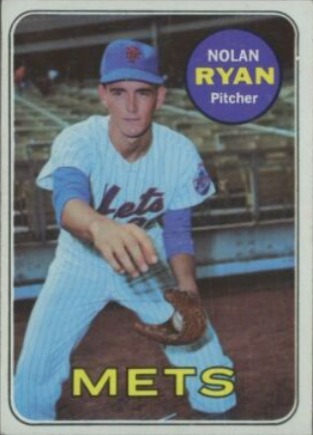 The 1969 Topps Nolan Ryan card is the next best thing you’ll find besides the 1968 rookie card. While it is not technically his true rookie card, this card still carries huge value.

Firstly, it’s the first real card of Nolan Ryan posing alone. Unlike with his rookie card, which he shares with another player.

Secondly, the card comes from a very early period of his career where he was still making a name for himself. In the photo, you’ll find a young and eager Nolan Ryan, looking to leave a mark on the league. And that he did in style!

For a 60s card, the photo on the card is surprisingly crisp, too. The design is, expectedly, somewhat simple. It has a nice, rounded radius on the border of the card, rounding off a simple but elegant card that is certainly viewed as a classic today.

Get this card if you want to have Nolan Ryan on the card alone. But be aware that it’s not a true rookie card. Despite that, the card can reach incredibly high values if in mint condition, so act quickly if you can find yourself a good deal. 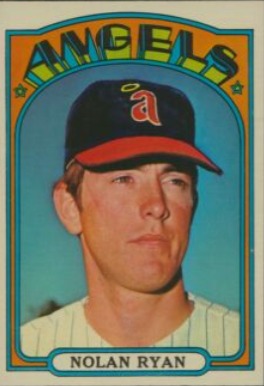 The next Nolan Ryan rookie card worth mentioning is the 1972 Topps card from his first season at California Angels.

So you can see why this rookie card has big significance for card collectors. It’s from his “rookie” season with Angels if we may call it that. One notable thing here is Nolan Ryan’s somewhat serious look – something that’s typical for most of his 1970s cards.

Overall, the design of the card is exactly what you’d expect from 70s cards – a big photo with a relatively small orange border, and an interesting graphical display of the team name at the top. Again, this card can reach dizzy heights if in top condition, so you can count yourself lucky if you can get a good deal out of it.

Yet another huge Nolan Ryan card from his early days. He still has that baby-face look going on, so this card will be desired because it’s from his very early times in the MLB, still with NY Mets.

It features a simple design with Ryan’s photo stretching over most of the card, while the back of the card also carries a nice description of the player. By then, he was already recognized as one of the best pitchers in the league, which was only a sign of greater things to come from this young chap.

This card is a popular one for people looking to complete their Topps set of cards for Nolan Ryan. It’s also quite difficult to get, especially in good condition, although not as tough as the 1968 card. It should be on your checklist if you want a complete set of Nolan Ryan cards.

Next to the 1972 Topps card, this one from 1973 is among the most popular cards from Ryan’s Angels days.

It is a fan-favorite because of the very crisp quality of the photo and a clean design. Additionally, the card comes after his first season as an All-Star player, so the value will be even greater.

The design of the card is also hugely appealing. It’s simple but one of the best designs you’ll find from the 70s, which makes this card a classic.

The rounded borders around the photo fit very nicely with the overall design. The nice player silhouette on the bottom right corner is what makes this card so nice. Finding a Gem Mint 10 will be close to impossible – there are only 6 of these recognized today. But, you’ll most likely find many 8s and 7s, which is still great quality for such an old card.

Not so much a rookie card, but still a very important card from the Nolan Ryan collector set. This card is a must-have if you want to complete your Nolan Ryan set, or if you simply want something a bit different.

It differs from most other Ryan cards from his early days in two things: one is the autograph in the middle of the photo. The other is the photo of Ryan itself. It’s one of the rare photos of him in action, which differs from others where he poses for the photo.

Yes, the design is not as great as the 1972 card, but it’s still special in its own right. And the card is definitely a must-own for any Nolan Ryan fan.

The 1978 Topps Nolan Ryan card is among the rarest cards from this set, which is why it’s also a highly desired one. The design of this card is what makes it so popular – yeah, the design is what makes this card so hugely popular.

First off, it has thick borders, which is a distinguishing feature of the 1978 Topps set. The border colors and the team’s name colors are slightly different to what we’re used to from 70s cards, though. The pink-ish name written in the bottom left corner complements the green border nicely.

And then there’s Nolan Ryan in the photo. He’s posing in the typical pose that was found on 70s cards. You might struggle to find a perfect card of this version though; just 3 – yes 3 of these cards were rated PSA 10 recently. So you might have to settle for a slightly lesser quality.

In 1974, Nolan Ryan was arguably at the peaks of his power. This year he was not picked in the All-Star team, but everyone knew he was still one of the best players in the league, after being a part of the All-Star for the previous two seasons.

If you love the look of this card, then go for it by all means. It’s slightly different from other Topps cards, with the rounded border and the nice pink graphics on each side of the card. What makes the difference is the photo, though. It’s one of the rare photos that were taken with Nolan Ryan in action, with his typical powerful throw.

Plus, you can also consider getting the autographed version if you want. You’ll have the chance to get this card without the auto. But it does make a difference because it makes it feel more authentic.

Let’s conclude this list with something a bit more modern. It’s the Nolan Ryan card from 1993, his final season in the MLB. Because of that, the card obviously has a lot of significance, especially for Nolan Ryan fans.

He finished his MLB career with the Texas Rangers as one of the best ever players. The 1993 card carries an immense amount of value because firstly, it’s the first refractor card of Nolan Ryan. These cards made their debut in 1993, so this only increases the value of this Nolan Ryan card.

Secondly, it’s from his last season with Texas Rangers where he became a fan-favorite. So if you’re a Texas Rangers fan or simply adore Nolan Ryan, then you should be watching this card. But beware – this one can cost an arm and a leg, especially if in good condition.