In this article, we’ll look at the best Aaron Judge rookie cards to collect, along with some other great options from his early years. 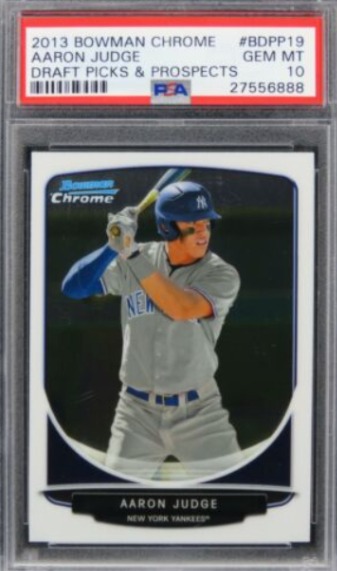 The Bowman Chrome Draft Picks card from 2013 is one of his earliest rookie cards you’ll be able to find. It’s from the season he got drafted, although he continued his career in the Minor Leagues where he prepared for the big time.

The great thing about this card is that it comes in all sorts of variety. It has many parallels – this black one is perhaps the most common one, although you’ll be able to find many other parallels: refractor, blue refractor, green, gold, orange refractor, as well as purple and red.

And if you can find yourself a version with his autograph, that’s even better. That card will normally be worth the most, although it’s also rare and quite difficult to obtain. And orange and purple parallels are also quite rare – only one purple parallel has made it to PSA for grading. 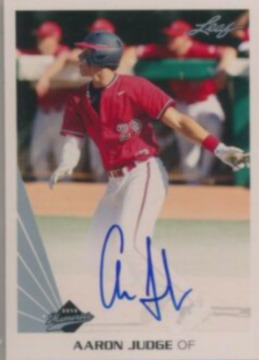 The second Arron Judge card from 2013 that’s worth taking a look at is the Leaf Memories one. Not only because it has a nice autograph at the bottom, but also the design is a genuine throwback to the 1990s card Leaf designs.

Back in 2013, Judge was considered one of the top talents for the MLB, and rightly so; in the photo on the card, he’s shown throwing one out of the park while lining up for the Fresno State Bulldogs.

If you’re a true Judge fan and collector, then you MUST own this card. There are some other parallels of this card that you can also consider, although this particular variation with the auto is perhaps the most popular and widely available. 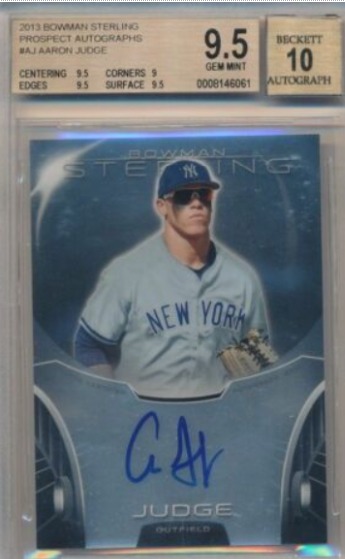 The 2013 Bowman Sterling Aaron Judge auto card is widely available, even today. However, the prices are holding up nicely, and they’re not likely to go down any time soon. You’ll find refractor variations of this card too if that’s your thing.

However, you must know that refractor cards are quite rare and thus command a higher value. Even the base cards can be difficult to obtain, but the good news is that you’ll find many listings on platforms such as eBay.

The card features a cool-looking Judge as he’s preparing for his next play in his New York outfit. The overall design of the card is nothing special, although the refractors put some shine on the card to make it stand out. 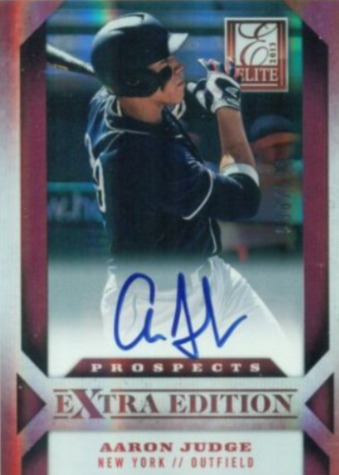 The Panini Elite card of Aaron Judge from the 2013 Extra Edition pack is one of the most versatile cards you’ll find from that particular year. It has many parallels, die-cuts, as well as signatures.

This is what makes it so desired and liked, though. You can pick your favorite parallel without compromising on the value too much. The autograph really manages to stand out on this card, and the overall design is quite nice, too.

On the card, you’ll see an Aaron Judge batting with his powerful right arm. The market for this card is not the biggest though, and getting a 10-rated card is even more challenging. However, it has picked up in the last few years. 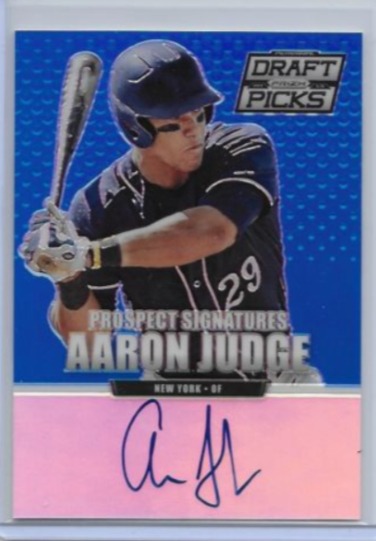 Last but not least from 2013, this blue refractor Panini Prizm Perennial Draft Picks rookie card of Aaron Judge. What’s typical about these Prospect Signatures packs is that they contain a set of 100 signatures from rookie players, so it was highly possible to get a valuable card with a pack like this one.

What’s lovely is that the signature is applied right onto the card. In addition to Judge, several other big rookie stars had their own cards, including Byron Buxton and Maikel Franco. However, Judge was arguably the biggest name from that draft.

You can get this card in several different variations, too. The problem is that not many are widely available on online listings at the moment, but definitely keep your eye out for one of these if they become available. 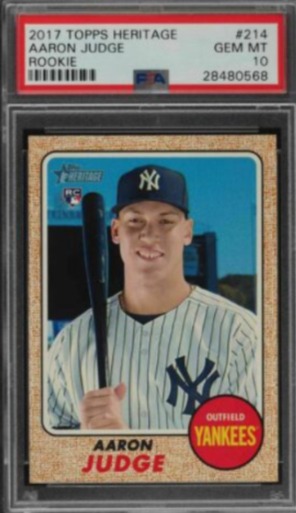 Now, onto the 2017 Aaron Judge cards, and the Topps Heritage one is arguably the most popular one out of all of them. That’s mostly because of the retro design of these Heritage cards where they use a 60s design, which will appeal to most retro card fans.

But even if you have a love for newer cards, you’ll almost certainly appreciate the look of this one. It just looks like a classic card, with the frontal image of the player in the middle and the nice retro border design.

However, this design comes at a (steep) price. These cards are highly valuable, especially in GEM MT condition like this particular one in the image. And there’s also a variation of this card with red autographs from the player, so those ones can be even more costly. Get this one if you have an eye for retro cards or if you’re a Judge fan yourself. 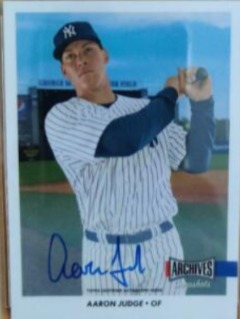 Looking at this card, you’ll notice that it presents nothing special in terms of design. It’s the photo and the signature where it’s at. This particular style of photo is typical of the late 50s and 60s cards, which is mostly why this card is so hugely popular.

If you love old, retro cards, then you’ll adore this design. It reminds you of those classic cards that you used to find hidden somewhere in the basement that your uncle used to collect.

The blue autograph really pops out from this card, as does the image that takes up the most real estate on the card. This design is typical for most of the Topps Archives card sets, so this one is for true Aaron Judge lovers and rookie card collectors. 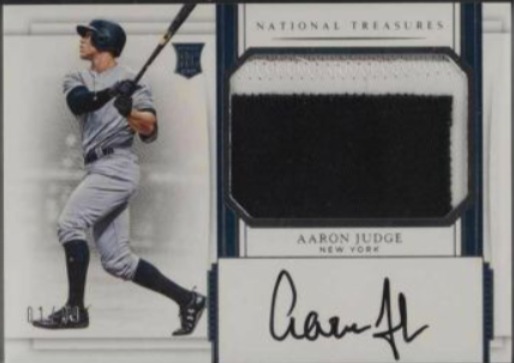 Cards from National Treasures sets are normally hugely desired by the card collecting community because they present something unique. Most of them have patches of match-worn apparel inside, which, of course, increases the value of these packets.

There’s also an autograph that’s widely visible and prominent on the bottom of the packet. The action image of Aaron completes this card, making it one of the most complete packages that a card collector could ever want.

The card features an elegant design and is considered relatively rare, so you’ll need to be prepared to dish out a sizable portion of your card-collecting budget. But we can guarantee you that you almost certainly won’t be disappointed by this beauty! 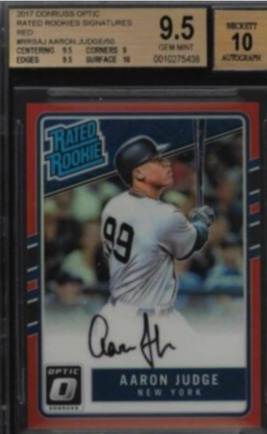 Donruss Aaron Judge cards are some of the most widely available rookie cards of this player. They’re also available in a wide set of parallels, from blue to red and white. Your collection will not be complete without all of the colors of these cards!

The most affordable card is the basic, holo card. So if you just want one of these without being too picky about the colors of the parallels, then you can go for that version.

The card itself is what you’d expect from a Donruss card – quality and elegance. It features the player in action while batting, and there’s also an autograph right beneath the image. So even if you opt for the basic card, you can’t go wrong here because even that variety looks stunning. 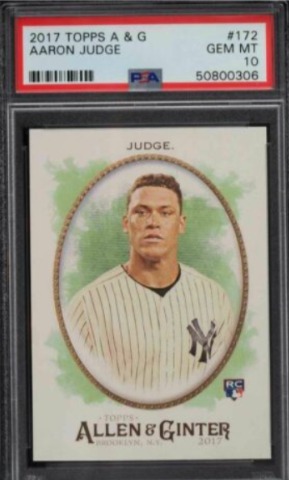 The Allen&Ginter variation of Topps card tends to be some of the best and most popular cards of rookie players. This particular card has Aaron Judge’s portrait looking like he’s a player from the 60s.

Of course, this design will appeal to so many collectors that like their cards old. It’s a simple card with the Judge’s name on top, and his portrait in the middle. The background splash has some green on it, and on the bottom, you’ll only find the name of the manufacturer.

This card will almost certainly induce some memories for retro collectors, and it’s also a great one for the future when you’ll look back at your Aaron Judge cards. You might not like the card at first just looking at this image, but it’s almost certain that you’ll be stunned by its beauty when you see it up close.