Ken Griffey Jr is one of the best ball players of his era. It’s funny actually. Griffey Jr is dead smack in the junk wax era, but his rookie cards are still highly sought after.

Ken Griffey Jr’s first appearance in the MLB was in 1989, so most of these rookie cards will come from that season. There are many Ken Griffey Jr rookie cards out there today, so let’s take a look at the best and most popular ones first. 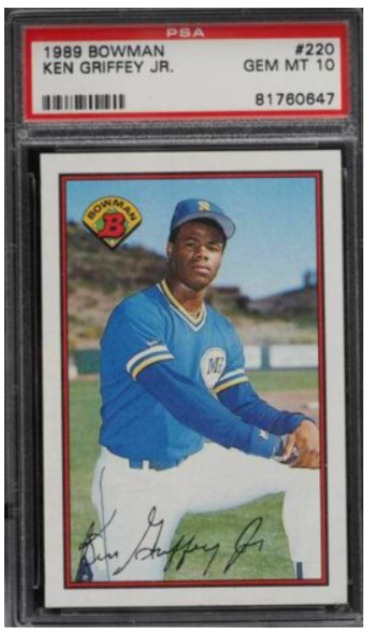 After several years of dominance from Topps card sets, this Bowman set from 1989 was one of the first ones to break that dominance. And it’s mainly thanks to gems such as this card of Ken Griffey Jr.

For this particular set, it was typical to have autographs at the bottom with players posing for the photo in a kneeling position.

The card features Ken Griffey Jr. in his Mariners outfit, posing with a rather serious expression on his face. This card is one of the first cards that come to mind when you say Ken Griffey Jr. rookie card. 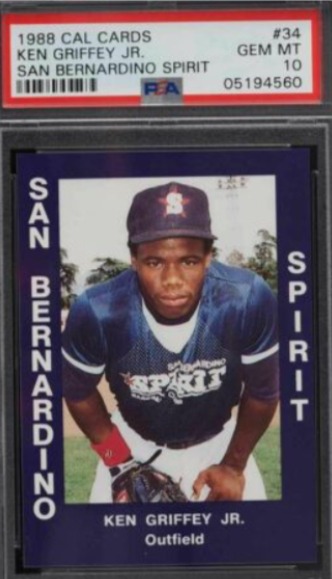 This card is arguably one of Ken Griffey Jr’s earliest available cards. It’s from his days in the minor league when he used to play for San Bernardino Spirit. He’s one of the team’s most well-known graduates, so this card has some sentimental value, too.

It’s a relatively rare card and it’s also even rarer to find it in mint condition such as this one in the photo.

The card features a somewhat simple design, with the name of the team written at the sides, while the player’s name is below the photo. In the photo, there’s Ken Griffey Jr. posing in the traditional pose that is found on these cards. 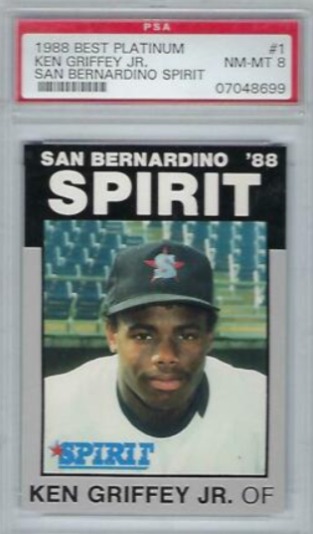 The #1 card from the 1988 Best Platinum set is arguably the most valuable rookie card of Ken Griffey Jr. from his minor league days. PSA has only had around 250 of these cards submitted for grading, so it’s even rarer than the Cal Cards version.

There’s also a version of this card with a blue border, although this one is rarer (but it doesn’t sell for as much as the blue-bordered version). This is arguably one of the more valuable Ken Griffey Jr. cards you’ll be able to find right now. 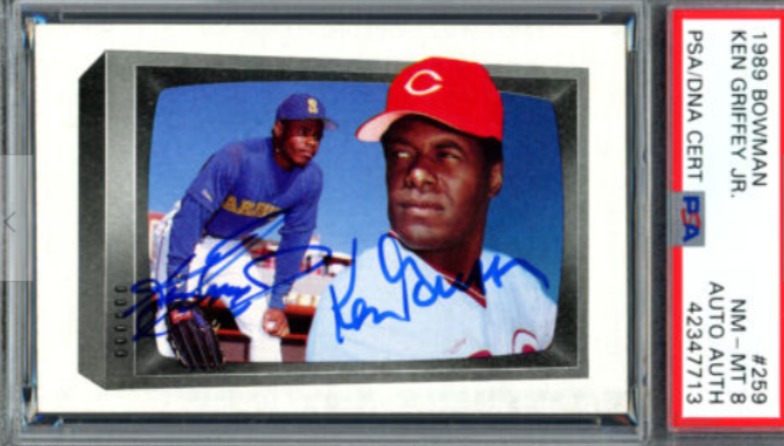 Ah yes, the good old TV set design. This card is iconic in many ways, but perhaps the biggest feature of the card is that it features both Ken Griffey Junior and Senior on the card. What increases the value of this particular card is the autographs of both participants, which is somewhat rare to find.

The card was a part of a Bowman set that used the old TV set design that they had going in the 1950s. Along with the Griffeys, there were other pairs of players portrayed on these cards, including the Ripkens, Alomars, and several others.

This card would be the perfect addition to your collection if you’re serious about rookie cards. While it’s not the most expensive of cards, it’s still a nice one to own since it presents a slightly different format than most other cards. 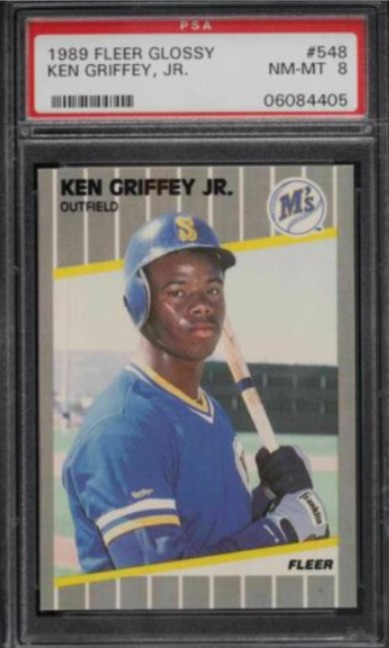 It’s considered that there are only around 100 Gem Mint versions of this card available today. Today, these cards sold like crazy if you’re able to find one and get it yourself for a reasonable price.

One of the main issues with this card is the centering – which is why so many cards were graded 8 and 9 instead of 10. There’s also the problem of chipping, so finding a top-quality Fleer card of Ken Griffey Jr. can be a challenge.

The Fleer Glossy card is rarer than the Fleer card version. And finding a PSA 10 can be difficult, but it may be worth taking a look at it if you’re looking for a good investment. 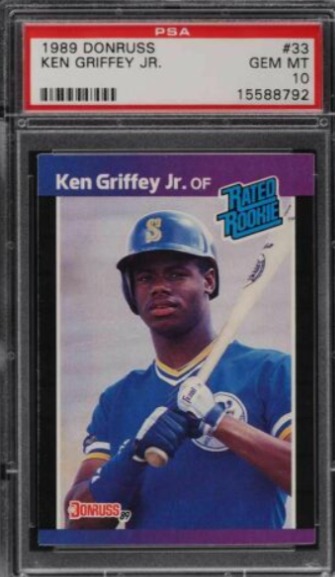 While the design of this card might be nothing special, the card represents an easy way to find a Ken Griffey Jr. rookie card and add it to your collection.

But even though the design is a bit lackluster and the color choices are not the most desirable, this card can present a nice investment opportunity considering it is in good condition.

The card itself features Ken Griffey Jr. posing for a photo with his bat, while the top and bottom borders consist of blue-purple color hues with Griffey’s name featured on the top border of the card. 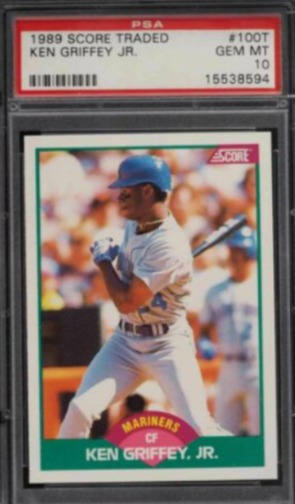 The Score Traded Ken Griffey Jr. rookie card is one of the rare cards that feature the Seattle Mariners outfielder in action. The overall design of the card is very 80s, because of the simplistic style and somewhat basic color choices for bordering.

The good thing about this card is that it can fetch several hundreds of bucks, especially if it’s in GEM-MT condition like this card in the photo. Some might find the colors a bit odd, although the simplistic design surely fits the time era. 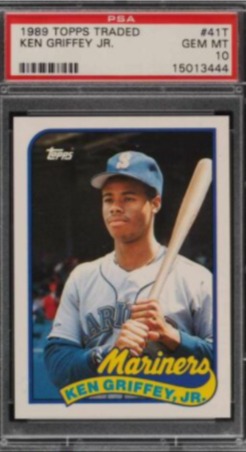 The 1989 Topps Traded Ken Griffey Jr. rookie card is one of the most wanted and popular rookie cards of this player. At the time, this was the mainstream card that was quite easy to find, and it still is today.

But if you can find a GEM MT card rated by the PSA or at least a 9.5 by BGS, you’re looking at a decently valued card. Some eBay listings have several bids and for most of them, which means it’s still in high demand.

What stands out is the floating name of the team on the bottom of the card as well as the name of the player. Also, the photo is quite interesting to look at, as it features a Ken Griffey Jr. confidently holding his bat. 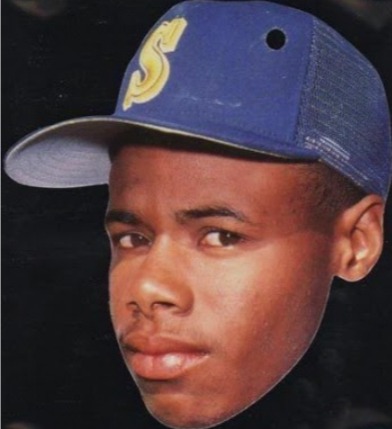 Technically, this card is not from Griffey’s rookie season. However, it’s so rare and exclusive that we had to include it. It’s from the 1989 season, and the reason why this card is worth so much is that it’s so damn difficult to grab it nowadays.

At the time it was printed and made, only a handful of shops received this version of the card. It’s a die-cut head of the player that’s meant to be stuck onto a card or a surface of your choice.

While it’s not a true card, it’s still an item that many collectors desire. So if you can get your hands on one of these, you can consider yourself lucky. 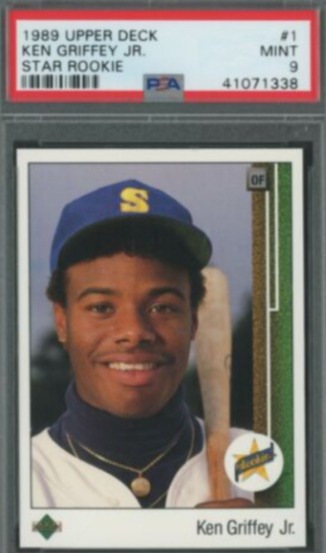 The 1989 Upper Deck set was a revolutionary card set in many ways. It was one of the first premium cards that started the card collector craze at the end of the 1980s. Today, this card is viewed as a legendary card, albeit widely available still.

It might be the most well-known Ken Griffey Jr. card among card collectors, too. Even though you can find it on almost any online card trading site, this card belongs in every true card collector’s inventory.

When you think about a Ken Griffey Jr. rookie card, this one might be one of the first ones to pop into your mind. That’s why it’s a decent addition to your inventory, or a good investment opportunity if you’re looking to sell it. 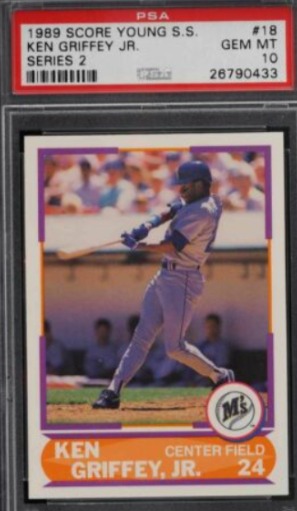 Let’s conclude the list of the most well-known Ken Griffey Jr. rookie cards with the Score Young Superstars Series 2 card. It’s an interesting card to take a look at, especially because of the intriguing color scheme on the card.

The borders combine the purple and the yellow-orange color, allowing the action photo of Griffey Jr. to stand out nicely. On the bottom of the card, there’s the name of the player as well as his playing position.

This card is also widely available today, although it’s a bit tougher to find it in pristine condition.

This covers the main rookie cards of the player, although there are many more variations to be found. 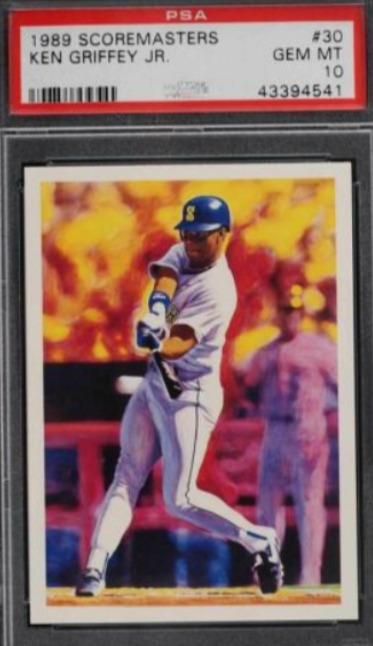 The Scoremasters 1989 Ken Griffey Jr. card features a simple design. The main focus of the card is on the action photo of Ken Griffey Jr., and it’s in the form of an artwork.

Although this card is not among the more popular Griffey rookie cards, it’s still worth your consideration if you want to fulfill your rookie card collection or are simply looking for something a bit different. 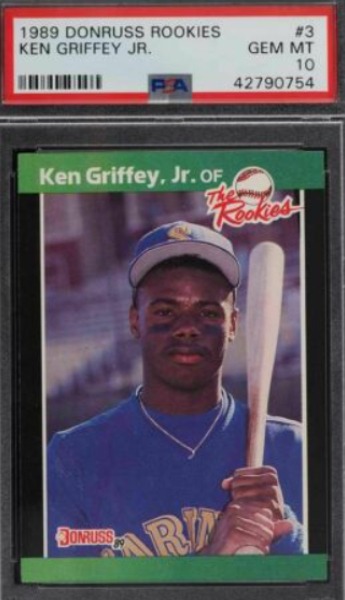 As one of the hottest rookies in the league back in 1989, Ken Griffey Jr. was understandably one of the first cards of the Donruss Rookies set. The set contained cards of 56 of the season’s best rookies, and Griffey was arguably the best of the lot.

The design of the card itself doesn’t steer away too much from the main Donruss set. What’s different here is the “the Rookies” logo found in the upper right corner of the card. Another card that should be a part of your collection if you’re a serious Griffey fan, or just a general collector of rookie cards. 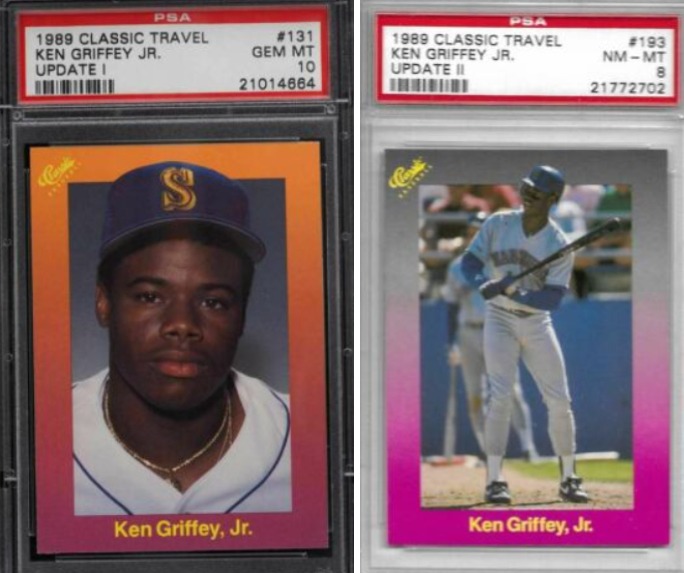 There are two Classic Travel Griffey Jr. rookie cards that you should be taking a look at – the orange and the purple versions. The orange version came out first, as it was a part of the Update I set.

The purple version is arguably the better of the two, as it has Ken Griffey Jr. featured in action. Also, it’s the later version of the two, as it came out in the Update II package, which was basically the update of the first pack.

Not the most expensive of cards, but these two are more for your collection rather than being used for profit. 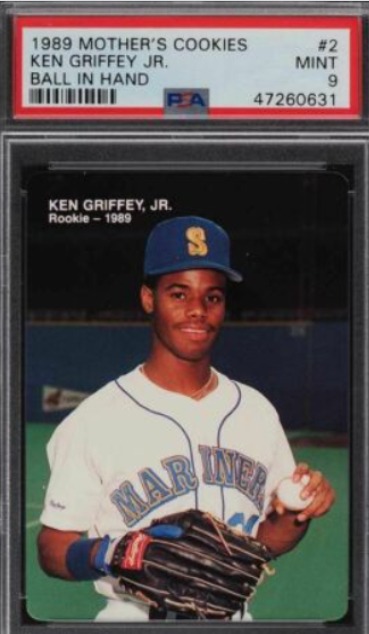 The Mother’s Cookies Griffey card was available as a part of the cookies package – normally, it was added as a free add-on to the package of cookies.

Insanely popular at the time, these cards were often traded and a part of large rookie collections and they still are today.

If you want, you can try and collect all of the variations of the Mother’s Cookies, but you might have a hard time because some can be quite expensive. You might also find collections of all four cards together in some listings.