Moses Malone — nicknamed the “Chairman of the Boards” was a true legend under the rim, and as a center and the 6’10’’ big man he could do it all in his 21-year ABA/NBA tenure. Drafted out of high school in 1974 as the first in history, Moses Malone led the Philadelphia 76ers to the NBA Championship in 1983. He was the Finals MVP that year, and the league MVP three times.

The unquestioned leader of the teams he played for, Malone was a 12-time All-Star and is a proud member of the Naismith Memorial Basketball Hall of Fame, as well as both NBA 50th and the 75th Anniversary teams.

Moses Malone was a physical specimen and an unstoppable force of nature in the paint. He was an excellent rebounder, a prolific scorer, and a very good passer for a big man. Malone was one of the most dominant big men of his era, yet somewhat underrated — so his cards are not as valuable and sought after as you might expect, but still are respected among his fans and collectors alike.

Best Moses Malone rookie cards can be found a year later from his debut in 1974. As he was drafted straight out of high school, his official rookie cards weren’t issued until 1975-76. The first known Moses Malone cards come from the 1975-76 Topps basketball set and the respective subsets: the Team Leaders and the League Leaders subset. 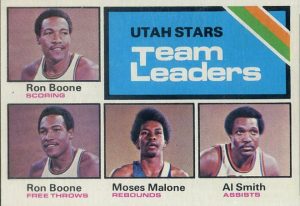 Let’s start with this 1975-76 Topps Team Leaders #286 where Moses Malone is pictured with his teammates Ron Boone and Al Smith from the previous season 1974-75 with the Utah Stars.

Moses led the team in rebounds that year, so he truly earned the spot on this remarkable card. Ron Boone is shown twice in the top and lower left corner (he led the Stars in scoring and free throws), and Al Smith is shown once too — in the lower right corner. Malone is shown in the middle, and the Utah Stars Team Leaders graphic is displayed in the top right corner of the card. 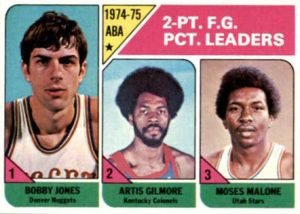 Another card from the 1975-76 Topps basketball set, this time from the League Leaders subset, features Moses Malone with Bobby Jones and Artis Gilmore as the players who led the ABA in 2-pt field goal percentage.

Malone is pictured third on the right, with Gilmore in the middle and Jones on the left as the number one in the category. 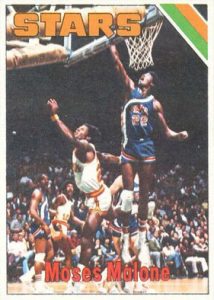 The 1975-76 Topps Moses Malone #254 RC is his first official individual card — and the best Moses Malone rookie card for sure. Part of the aforementioned 1975-76 Topps basketball set, it has a nice vintage design, with the team name on top of the card and the player’s name on the bottom. A wonderful action shot of Moses Malone in a vertical jump right under the basket clearly pictures his athletic ability and captivates the look of any basketball fan. There are also two colorful diagonal stripes in the upper right corner of the card. 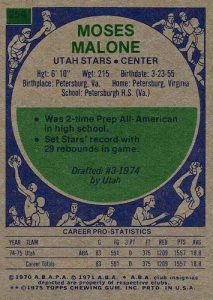 The 1975-76 Topps basketball set is known to have this neat, straightforward design, and some even label it as the best solution and most visually appealing design of that era.

The back of the card commands attention as well: it has more info than cards in other sets or years, it has more design details and just looks nicer.

This is also the last time when Topps divided the set into ABA and NBA, as the next year the two leagues merged.

As Moses Malone was drafted straight out of high school, and hasn’t suffered from major injuries that could potentially end his career earlier, his ABA/NBA tenure was pretty long — 21 years in total. As a result, there are plenty of Moses Malone sports cards on the market, and we’ll review the most notable ones below. 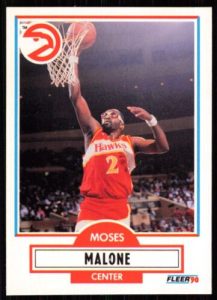 The 1990 Fleer #3 is one of Moses Malone’s notable cards, and it was released during his time with the Atlanta Hawks. Malone is pictured going for a layup here, in his red Hawks uniform, with the Hawks logo seen in the top left corner of the card, and player’s name and position on the bottom.

Part of the 1990-91 Fleer basketball set, which included Larry Bird, David Robinson, Mark Jackson, Hersey Hawkins, Kenny Smith, Spud Webb, this card bears a minimalistic design liked by many. This Fleer Moses Malone piece is very affordable, and you can easily find one in good condition as well. 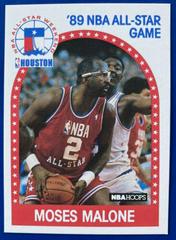 Now this is a more popular Moses Malone card than the previous one — it’s his All-Star edition Hoops card. Released in 1989, for the All-Star game in Houston, this card pictures Moses Malone in his red NBA All-Stars jersey, posting up with the ball in both hands. The action shot is surrounded by an arch with the stars inside of it, the NBA All-Star Weekend logo in the top left corner, and the player’s name in the lower part of the arch.

The 1989 Hoops basketball set includes cards of Michael Jordan, Magic Johnson, Charles Barkley, Akeem Olajuwon, Patrick Ewing just to name a few, but nevertheless is pretty affordable. The 1989 Hoops Moses Malone All-Star #84 is up for grabs for a fair price, and you’ll be able to snatch it for your collection with ease. 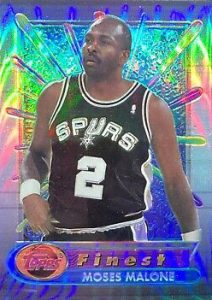 This card is notable because it represents Moses Malone’s last season in the NBA, and the final year of his professional career. He ended his 21-year ABA/NBA run with the San-Antonio Spurs franchise, where at the time Malone was the last remaining former ABA player. Moses Malone was coming off the bench as a back-up center to David Robinson, and in his final game he scored a buzzer-beater from the opposing free throw line. How cool is that?

The 1994 Topps Finest Moses Malone #268 depicts him in-game, in the black Spurs uniform. The Topps Finest logo and the player’s name are seen on the bottom of the card.

Despite the significance though, this card is very obtainable, and is available on the secondary market for reasonable amounts. 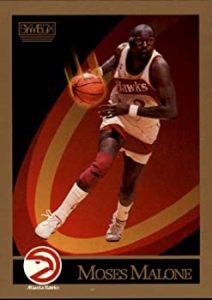 Moses Malone is represented in the 1990 Skybox basketball set with the #6 card and a nice action photo where he’s dribbling a basketball. Malone is pictured in his white Atlanta Hawks uniform, and the Hawks logo is printed in the bottom left corner along with the player’s name in golden letters. The action photo is surrounded by a red rounded background, which adds a nice touch to the card.

The 1990 Skybox basketball set has a design that was a little bit ahead of its time, and the mosaic look was rather uncommon in those days. The picture quality is pretty good, though the design overall is pretty simple and a bit boring compared to the Fleer or Upper Deck sets which were released the same year (the infamous “jumbo” cards for instance).

Similar to other Moses Malone non-rookie cards, this one is pretty affordable too. 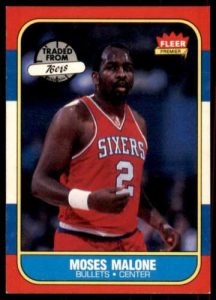 Finally, the 1986 Fleer Moses Malone #69 from the set any respectable collector would recognize, the legendary 1986 Fleer basketball set that featured rookie cards of such legendary players as Michael Jordan, Hakeem Olajuwon, Charles Barkley, Karl Malone, Dominique Wilkins, and many others.

The set itself is very popular and therefore expensive. Moses Malone’s Fleer card is not an exception here, despite hanging out in the middle of the set.

The design is easily recognizable as well — the striped red-blue-and-white background with the yellow rounded border around the action shot of a player. Moses Malone is pictured here in his red Sixers jersey.

It’s pretty hard to find a 1985 Moses Malone card on the secondary market in mint condition, so getting your hands on a PSA 10 gem-mint piece would possess a serious challenge.

Moses Malone has been an ace of the NBA throughout his whole career, a true pioneer of his time as he accomplished many great things that had never been seen or done before. His basketball card history is no different. Despite Malone’s significance and importance in the game of basketball though, his cards are usually affordable, reasonably priced and somewhat easy to find.

Even his rookie cards remain achievable for collectors at entry-level prices, so if you’re looking to expand your collection, or start as a novice in the hobby, a nice Moses Malone card is certainly a great choice.