There’s one mainstream option for David Robinson rookie card which also has an interesting story behind it… Read on to find out more. 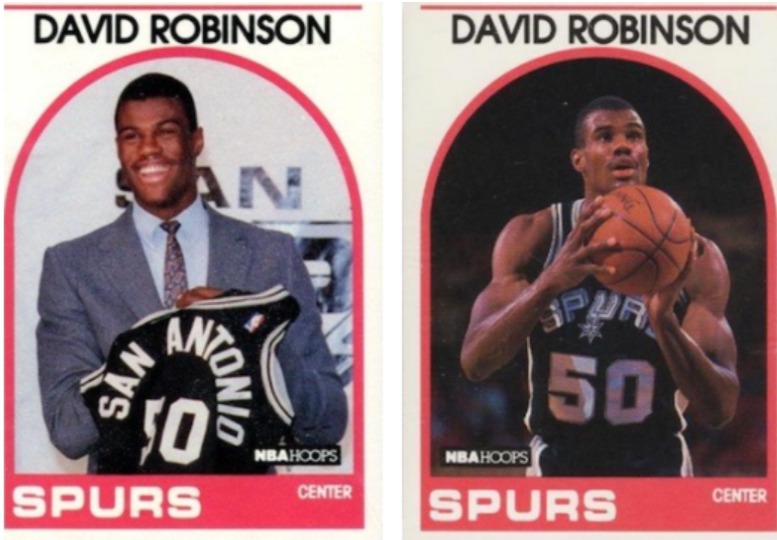 Originally, this Hoops David Robinson rookie card was a hard find. They were only printed in limited qualities, which meant that the demand for the card was through the roof, increasing the prices of these cards on the aftermarket.

Today, they can be found relatively cheaply. You may find them for a couple of hundred dollars, if not less – depending on the condition. You have two choices for this rookie card: the #138 card, which is a bit more formal and it features a photo taken at the 1989 draft. The second card, the #310, has Robinson pictured in action for Spurs.

There’s an interesting story behind this card that made it even more popular back in 1989. First, it was because it was one of the first instances where a rookie player would be officially featured in a product in his first season. That’s why the demand for this card was through the roof initially.

Secondly, Robinson was not officially drafted until 1989, although he was already eligible to be drafted to the NBA in 1987. The problem back then was that Robinson still had to complete his military service, as he had two years still to go.

He had to commit to a 2-year service in the Navy because he graduated in 1987. So from 1987 to 1989, Robinson had to stay with the Navy instead of entering the NBA. This earned him a reputation for being the best ever basketball player in the American Navy. He also received the nickname of “The Admiral”, which stayed with him for the rest of his career.

His college career differs greatly from the vast majority of NBA players. Most other players spend their youth in colleges, plying their trades in one of the college teams. Robinso was different – his college career years were spent in the Navy.

The marketing campaign for the Hoops cards was always strong, but it strengthed in the late 1980s. This alone made collectors go crazy for these packs, and the additional motivating factor for collectors was that these cards were a bit scarce at the time, so when there is a shortage and the demand is huge, the card values go crazy.

One funny thing that collectors did back then was that they looked through the transparent foliage that was used for wrapping the cards. This allowed them to see what cards were inside, and if there was a David Robinson on top of the pack, the value of the set increased greatly. 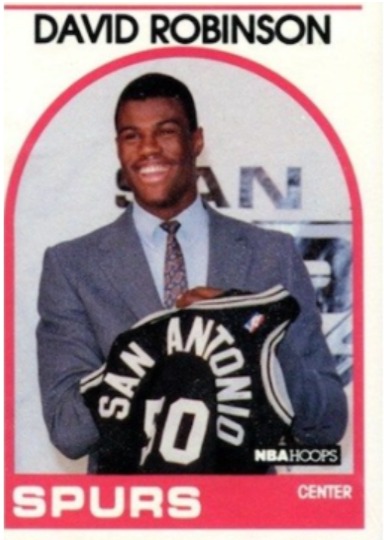 The #138 card was the first card where Robinson was featured as a rookie player for the SA Spurs. It features an image of a young David Robinson from the 1987 NBA draft, proudly holding his Spurs #50 jersey.

This card was available in the first set of 1989 Hoops cards. It’s his official rookie card to date.

On the back of the card, you’ll find an image of Robinson’s face, and some information about the player. There’s also a neat description of his achievements to that date, describing Robinson as a “potential franchise player”. Perhaps the most notable thing is the amount of blank space, which is unusual for basketball cards. 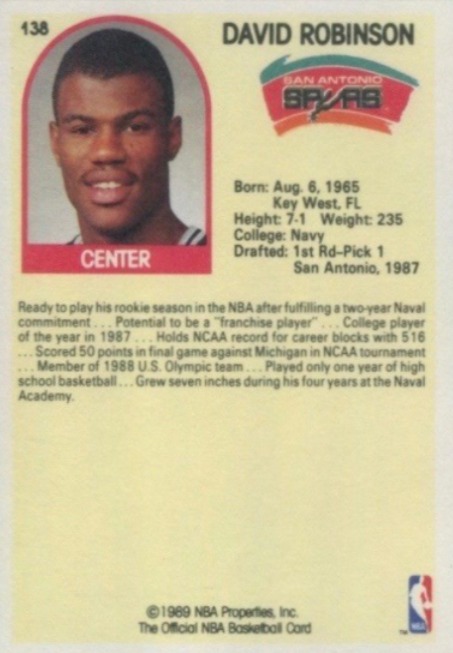 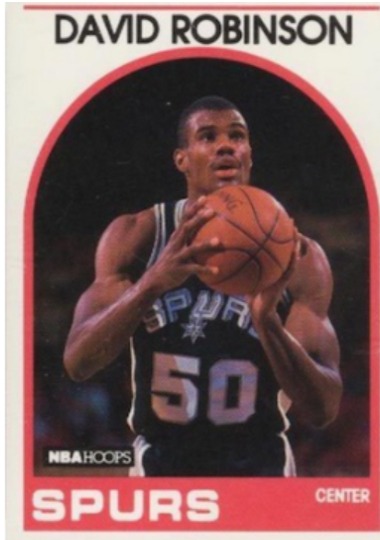 This card was a part of the second set of 1989-90 Hoops cards. It has an action image of Robinson, although the entire design remains largely the same as with the first one. If you like action cards a bit more, then this is perhaps the better option for you.

The #310 and the #138 tend to have similar values, although the #138 tends to be preferred by many collectors because it was released earlier. Nonetheless, both are widely available and considered as his rookie cards, so you can make your picks based on your preferences.

Those two Hoops cards are the only cards that can be officially considered as Robinson rookie cards. But you still have many great options if you’re looking for a good card of David Robinson – one came out even earlier than the Hoops card. 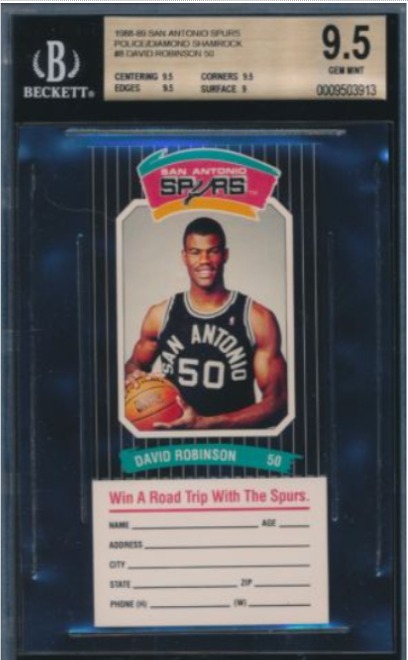 Even though this card is not considered his true rookie card, it’s still his earliest card known to date for NBA collectors. This card was a part of the giveaway of cards that the Spurs organized, allowing Spurs fans to get a glimpse of their newest addition to their roster.

It’s a slightly oversized card featuring a tab at the bottom of the card, which says “Win a Road Trip With the Spurs”. Apparently, the Spurs offered a chance to recipients of this card to get a chance to travel with the team.

The design of the card is a bit more colorful than the Hoops card. But more notably, it’s the first card where Robinson was featured, even though it’s not officially recognized as his rookie card. Only a few selected fans received this card as a part of a giveaway, although it’s widely available today at modest prices.

There were two versions of this card released – the first and the most common one was with the tab, while the other version came without the tab at the bottom. Perhaps the one with the tab is a bit more iconic, while many people might find it a bit excessive and unnecessary. 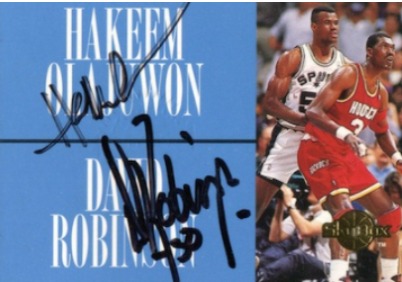 The two big guys of the 1990s square off on this iconic card that was one of the preferred options for those who loved both of these players. The card was issued as a redemption, and it was not widely available. It was quite hard to find it, although you might have a bit more luck today.

One of the main features that make it so popular is the two autographs of the two giants. Other than that, the card is nothing special in terms of design, where the autographs are made on a blue background, and on the right side, there’s an image of Olajuwon and Robinson playing against each other. 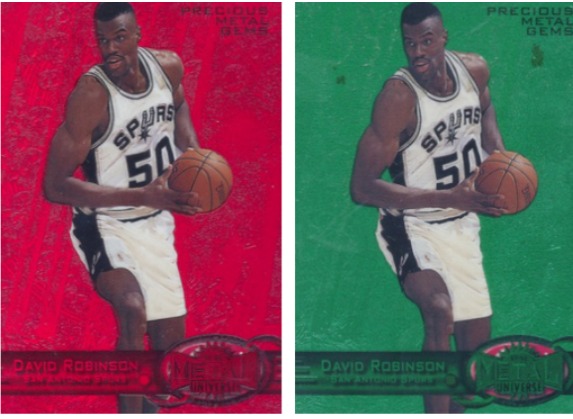 If you have a thing for collecting parallels, then this Metal Universe Robinson card will be right up your alley. This particular card is the PMG parallel that featured two color versions: green and red. Green cards are far less populous, with only 10 versions printed, while the red version has 90 cards to its name.

It’s a bit of a vivid card so if you love those classic cards, then it might not be for you. But if you’re really dedicated to collecting as many Robinson cards as possible, then these two should make your list. 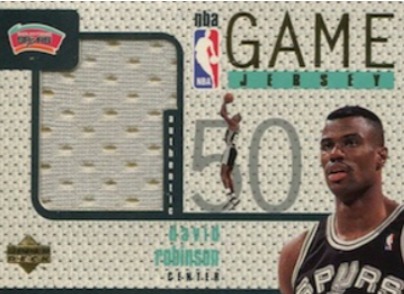 This is the first David Robinson relic card that doesn’t pop up that often. It has a patch of Robinson’s game jersey, and it’s a popular choice for those who collect jersey cards. It also looks quite nice, and much more sophisticated than what we’ve seen so far. It has a sleek and elegant white design with a patch of Robinson’s jersey on the left.

To be fair, this sort of design would not look out of place, even a few decades later. So if you want a nice looking card, then this one is your option. The main problem remains that it’s not easily attainable, because they were rare even originally, so the prices can be quite high.

David Robinson is widely considered to be one of the best ever Spurs players, as well as one of the best Centers in history. He was known for his blocking ability as well as defensive game, but he was no slouch in the attack, with a 21.1 PPG average, while collecting an average of 10.6 RPG, and 3 blocks per game on average.

His rookie cards (Hoops #138 and #310) are quite easily attainable nowadays, although that was not always the case. Back in 1989, these cards were among the priciest cards, and they even exceeded the value of Michael Jordan cards for some time.

So the Hoops #138 and #310 are possibly the best cards you can get of this player – they’re cheap and widely available, and they’re his official rookie cards.

Although many collectors prefer the #138 card because it’s his earliest card. Both are great options and at relatively modest prices. You can get a decent ROI if you find a decently priced card.

If you want a more expensive alternative, go for his 1997-98 Upper Deck Game Jerseys card. This can be considered the premium option from this list.