Steve Nash. One of the best and most elegant playmakers in NBA history. You might know him today as a basketball coach, but in his prime, there were not many better players in the league…

That’s why Steve Nash rookie cards still carry a lot of popularity. 1996/97 was Nash’s rookie season, so all of the cards we’ll mention here will date back to those years when he was drafted by the Suns.

These are the best Steve Nash rookie cards to have a look at today. 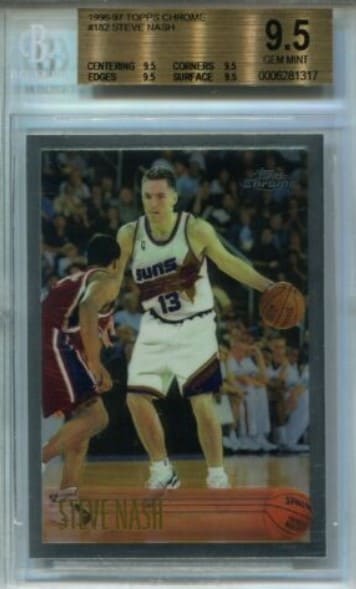 Let’s start off with the card that I feel has the most potential when it comes to Steve Nash rookie cards – the 96/97 Topps Chrome Nash RC.

Topps Chrome cards have always had a reputation for bringing some of the best rookie cards on the market. It’s one of the classier cards of Nash – subtle, elegant, and not loud.

However, this is the preferred rookie card for many collectors for various reasons. Firstly, it’s from Topps Chrome and you can’t go wrong with buying their cards. Secondly, it has that classic feel and look going for it, which is what people like with rookie cards.

Nash was drafted by the Phoenix Suns in 1996 as a 15th overall pick in the first round. It’s fair to say that the expectations were reasonably high, but Nash didn’t do particularly well in his first season. He was then drafted to the Mavs and then returned to the Suns stronger than ever, winning two MVP awards along the way.

And this card celebrates Nash’s career in many ways. You’ll find that this card is perhaps his most valuable rookie card, and you might have to spend several thousand to get it, too – especially if you opt for one of the refractors.

Topps Finest is a bit shinier and colorful than Topps Chrome, which suits some collectors more, especially those who love a bit of graphical sophistication on their cards.

You have two options with Topps Finest: #75 which is the Apprentices version, and #217 which is the Heirs version. Both are valuable and popular, and they have similar price tags so you choose whichever you like better.

In addition, there are some popular parallels that you can go for with both variations, which will cost additional bucks if you want to get them, but they’re worth it if you want more variety in your cards, as well as rarity. 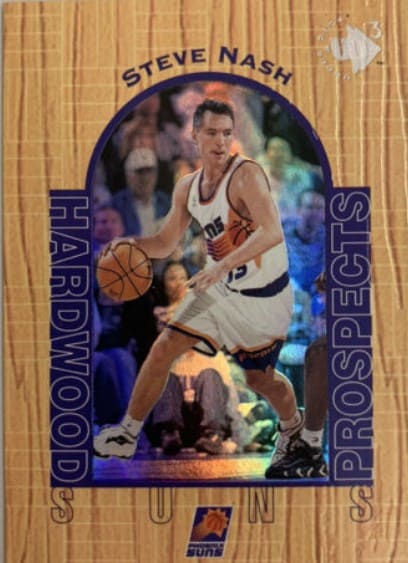 If you like hardwood, then this card’s for you…

In all seriousness, UD3 is one of the mid-range Steve Nash rookie cards that will appeal to a wide population due to its unique style and looks.

UD3 was blessed with some epic rookie cards in 1996/97, including Steve Nash and Kobe Bryant.

If you like the look of this card, then you’ll be pleased to know it’s not as expensive as the two Topps cards we’ve just seen above. It can be considered a mid-range Nash rookie, because it’s able to cost several hundred dollars in top conditions, and potentially more. 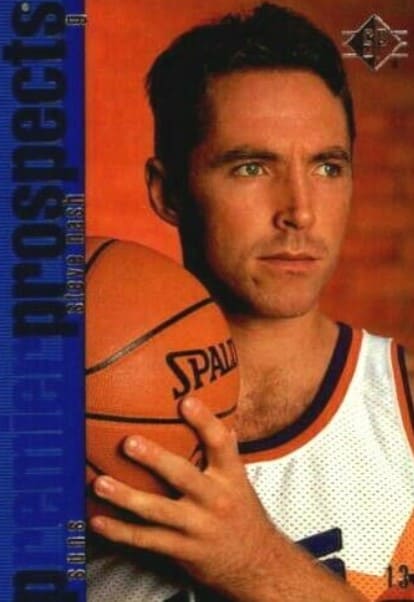 SP is the right choice for you if you like portraits instead of action shots of players.

And this Steve Nash SP rookie card is a fantastic addition to anyone’s collection. It will provide some variety and also a bit of character with this close-up shot of a young Steve Nash.

It’s also a fairly affordable Nash rookie, as it may cost several hundred dollars even in the GEM MT condition, which is great news if you’re a perfectionist.

SP is famous for its portraits of players and this blue banner on the side of the card, which will appeal to those who like a bit of blue on their cards as well. 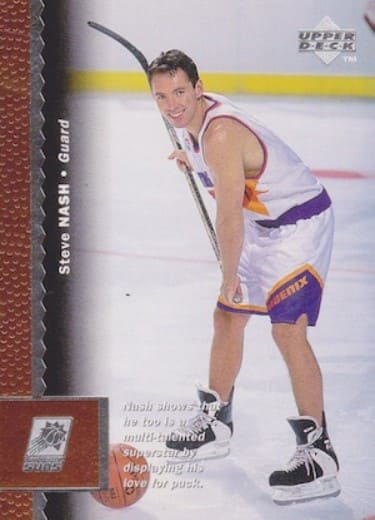 Next up we have this Upper Deck Steve Nash rookie, which is one of the more widely available Nash rookies and thus not very expensive to buy.

You might immediately think to yourself: what on earth is Nash doing with a hockey stick in his hands, trying to shoot a basketball? Well, to provide some context, it does make a bit of sense since Nash is a Canadian and we know that hockey is their national sport…

To be honest, this card will often be preferred to some of the classic basketball cards because it’s different, and it adds a bit of something different to your collection.

And of course, it’s from Upper Deck, which is one of the best overall card companies to buy from, especially when it comes to 90s cards. 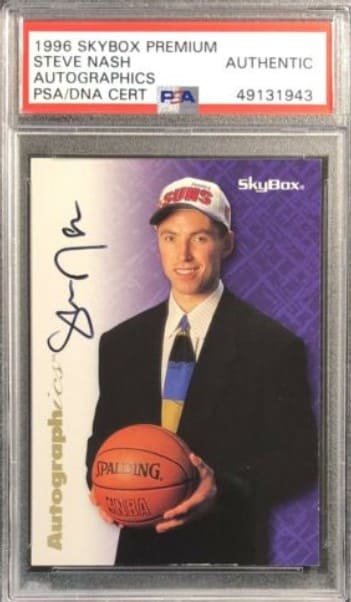 Most of the Nash rookie cards are base cards without additional autographs or match-worn jerseys, which is the case nowadays.

However, this SkyBox Premium Autographics rookie card of Nash is a bit different. It has a Nash autograph on it, which means it immediately became a hit with those collectors who wanted something extra.

Today, this card is one of the most valuable Nash rookie cards, and it will not come cheap. It can cost several thousand dollars, depending on its condition.

You should know that there are two variations of this card: with the black auto, and with the blue auto. Also, this card should not be confused with the base SkyBox Premium rookie card of Nash, which is completely different and also a bit less expensive. It looks like this: 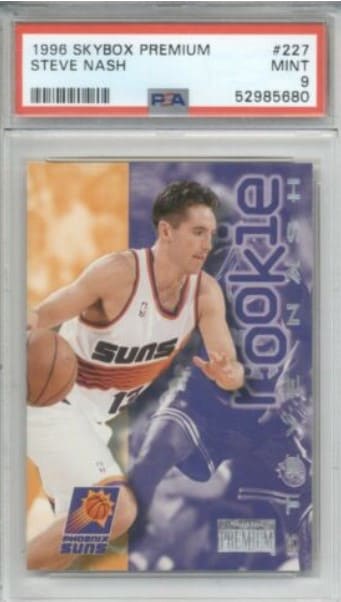 And by the way, this SkyBox Premium #227 card is one of the budget options when it comes to Steve Nash rookie cards… 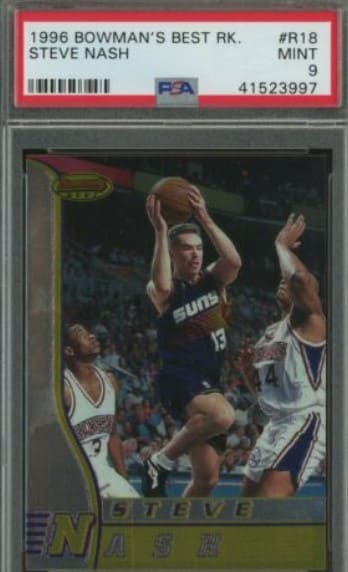 This Steve Nash rookie card is popular for a bunch of reasons:

So for those reasons, Bowman’s Best continues to be one of the most popular Steve Nash rookie cards, and will not come cheap if you opt for one of the parallels.

However, the great news here is that the base card tends to be relatively affordable, even if you’re tight on a budget.

Bowman’s Best also features the chromium technology and a bolder design that you’ve seen with Topps Chrome. And if you own one of the parallels for this card, especially the Atomic Refractor parallel, then you’re looking at several thousand dollars of value, if not more than that. 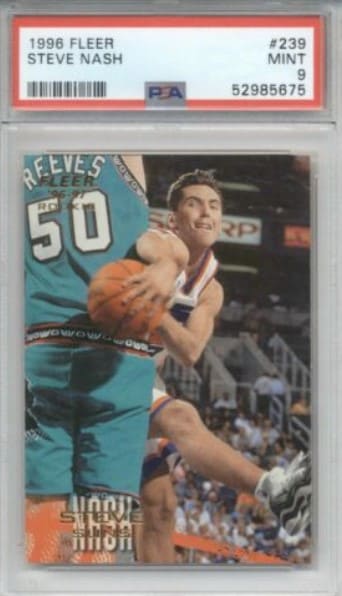 The Fleer Nash rookie card is a great option for you if you’re looking for an entry-level card that won’t cost you an arm and a leg.

In truth, this Fleer card is one of the most widely distributed Nash rookie cards. This means that it will be generous to your wallet and would also make a very nice addition to your card collection.

If you would like another option next to this Fleer card, there’s also the Fleer Ultra rookie card for you to consider: 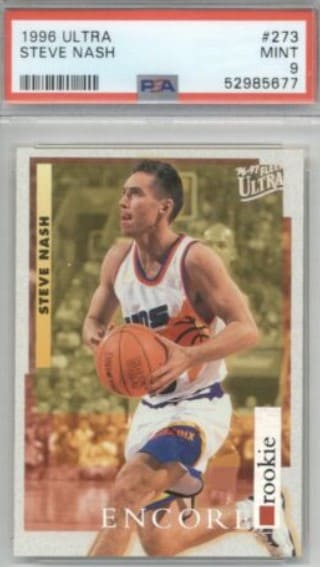 The Fleer Ultra card looks a little different, but it’s similar in terms of its price to the base Fleer card. 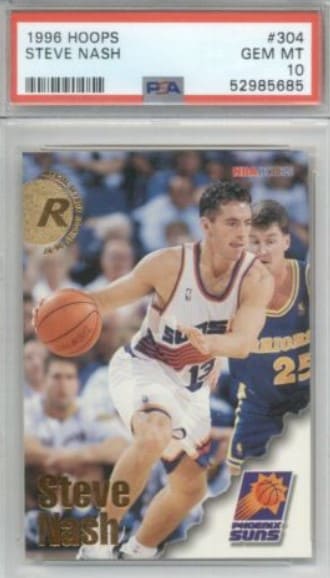 Another great alternative if you’re on a budget is the Hoops Nash rookie card, which is a good option for those who are willing to spend a few hundred dollars to get this card.

Hoops have a reputation for being one of the leading card companies, even today, when it comes to rookie cards.

Because this card was widely distributed, it never reached the heights of Topps Chrome or Topps Finest. And its layout is quite standard, although this card will appeal more to those who prefer an image-heavy card. 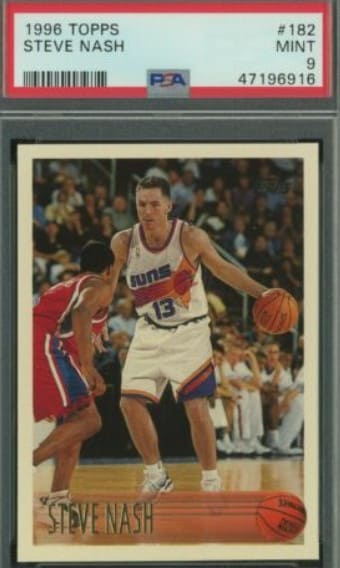 Last but not least, we ought to give this Topps card a mention. It’s almost the same as the Topps Chrome Nash rookie card, with some subtle differences that make this card a bit less valuable.

Chrome cards were also rarer and not as easy to get, meaning that this base Topps card is a great alternative if you’re on a budget and you’re willing to dabble with some rookie cards for the first time.

This is a pretty low-risk investment that might even increase in value as the years go by, although the card is perceived more as a collector’s card rather than a card you would be making huge profits on.