In this article, we’re going to look at how to flip sports cards on eBay, with a focus on three methods to quickly flip cards and make some cash.

Note: In this article, we’re looking at fast ways to flip cards (within a few months). So, we’re not going to mention strategies that include holding a card long-term to see natural price increases. While that’s a great strategy, we’re looking at flipping cards here.

Before You Start: Make Sure You Know How to Sell on eBay

Now, this should go without saying – but here we are. 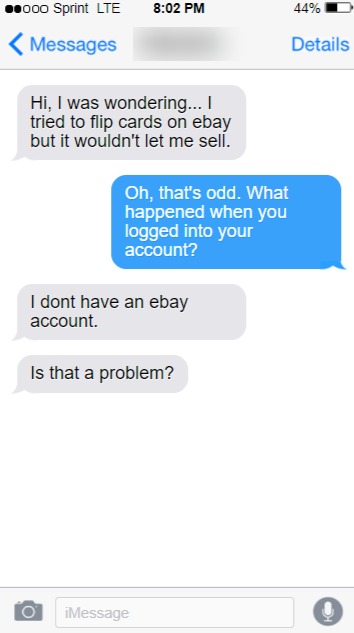 I wouldn’t jump straight into flipping sports cards on eBay until you’ve had a few sales. You don’t want to make any costly mistakes when you’re quickly trying to flip a card.

Odds are you’re going to make some mistakes, so get them out of the way early.

If you want to learn more – check our guide to selling sports cards on eBay.

How to Flip Sports Cards on eBay – Three Strategies

Here are our favorite three strategies for a quick-ish flip.

The first and most obvious in idea, but a little harder to execute.

Basically, you buy a card at a price you think is lower than it’s market value. Then, you sell it for what the card is worth.

There are two ,main ways to do this:

It’s unlikely that you’ll be able to buy a card and instantly flip it for a better price, but it does happen. You just need to do your homework and get a little luck.

For this strategy, it’s best to buy graded cards to flip. Graded cards hold their value and give the buyer a level of security when buying. If you buy a PSA 10, you know you’re getting a good quality card.

Let’s just say that an NBA player is having a hot streak with shooting. He’s averaging 35 points over two weeks and is pretty much a constant bucket.

Odds are, his card value will have a mini spike over that time. You might even get 5x – 10x card prices depending on the price the card started at.

In this case, it’s a good idea to sell high if you don’t think the player’s hot steak will continue. You might not get off the train at the absolute peak of their price, but you can make a nice profit.

If the player isn’t a huge name, there’s likely not going to be too many PSA graded cards out there in circulation. You can take advantage of that be first to market and get a nice price.

To find a player you think will go up in price, there’s a few things to look out for:

Strategy Two: Buy Ungraded Cards and Have them Graded

Another way you can flip cards is to buy ungraded cards that you think will get a high grade, get it graded, and then flip it for a higher price.

Now, this may take a while if there’s a long turnaround on grading, but it is worth it.

If you’ve been around the card game for a while and had a lot of cards graded, then you can buy ungraded cards and profit for the increase in prices when they’re graded.

Using the example above – if you looked and thought that four or five of those cards look like they’d rate a PSA 10, you could make a very handy profit. Even with the PSA grading costs, you can make over $150 profit per graded card – depending on when you sell!

So, there’s some good money to be made if you can find top quality cards

I’d only do this if you know a lot about card grading though – you’d have to be pretty confident that the cards you see on eBay will be able to be graded highly.

Similar to the last method, a strategy you can take is to buy undervalued boxes and profit from any star players in that box – espescially graded cards.

For example, Michael Jordan cards can usually sell for over $100 if they’re PSA 10 graded. Here is an MJ card from the 1990 SkyBox set. 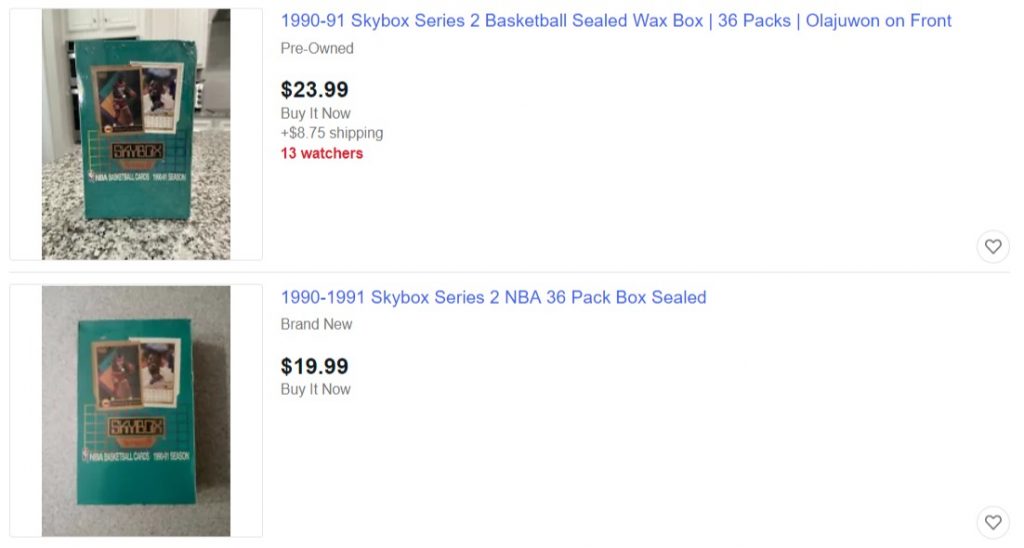 You can make some good money buying those boxes, taking out the MJ cards and having those graded. From there, you can list those graded cards on eBay. You can easily turn a $20 box into $300 in cards.

Not a bad profit at all!

You just need to make sure you do your homework though.

Personal story time: While I know what I’m doing in regards to sports cards, I’m still an idiot by nature and make some dumb decisions.

For example, I saw this Ronaldo card listed as sold on eBay. 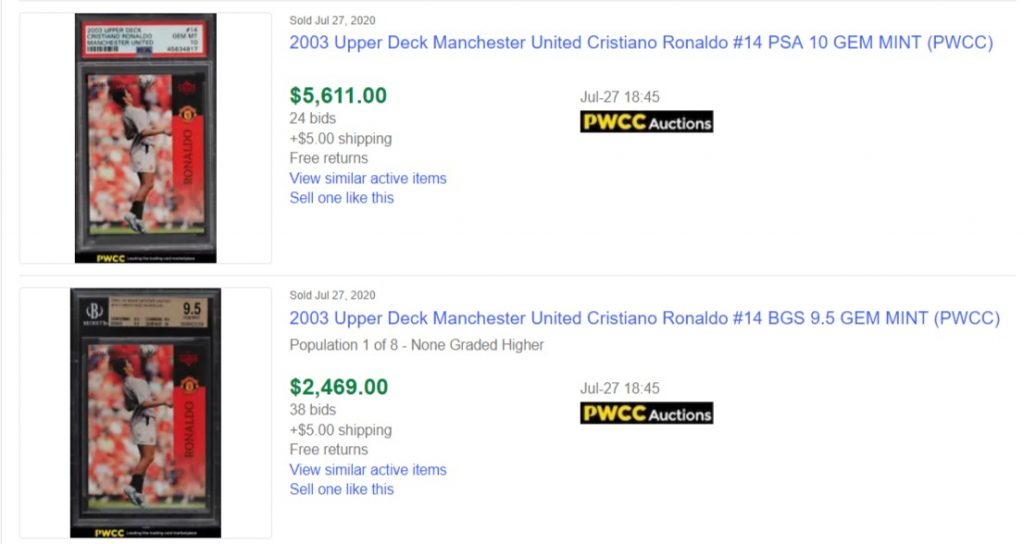 $23 or a pack of cards that includes a Ronaldo rookie (2003 is Ronaldo’s Rookie Season at Man United).

Holy hell… What a bargain! I can’t believe someone is dumb enough to sell that!

Add to cart – sold! I better hop on this before someone else does.

Moral of the story – do your homework.

If you want a long-term strategy, you can also sit on your boxes for a few years and sell it later on. It’s really up to you. For the quick flip though, break the box and get those key cards graded.

Tips For a Successful Flip

If you’re looking to flip cards on eBay, there are some rules that you should follow regardless of what

The basis of flipping cards is buying at a lower price and selling higher. Granted, there are some industry-wide price raises where all cards increase in price

However, most of the time you want to buy cards of a player who you think will get better in a short amount of time.

So, that means an underrated rookie who looks like they’ll start. A backup QB to a vet that looks like he’s on his last legs. The bench player who is going to get a starting job this year….

All of these guys are likely to have a price increase in the not-to-distant future.

Sell at a high

The second part of the flip is selling on a high.

Rather than just ride it out, it’s a good idea to keep a record of what you paid for your cards, and the return you’d like to sell at. This will keep emotions out of it, and make sure you don’t hold onto the player too long.

Ideally, you’d want to give yourself a 2x – 5x price increase, depending on the initial price you paid and the type of increase you’re expecting. If you’ve got a player on a 6-game hot streak, you might be happy to sell at 2x, if it’s a guy who has taken on a new role and is looking like having a big season, then maybe 5x is the way to go.

Either way though, you don’t want to still be holding your card when the card’s price goes back down. I’d much rather sell a little early than sell too late.

Make the most of the player being in the news

Sometimes a player can get a bump in prices for something that isn’t performance related at all.

For example, when the MJ doco ‘The Last Dance’ was on ESPN, there was a huge bump in Jordan card prices – but it wan’t only Jordan. Scotty Pippen cards, Rodman cards, and other Bulls cards all went up in price.

But it wasn’t only that, there was even a mini bump in the price of other 90s stars that featured in the doco.

Or, there is also a little bump in price when a retired player makes the Hall of Fame.

So, see if there’s any potential factors that aren’t performance-related. They might be Hall of Fame eligible, or there might be a new 30 for 30 coming out about them.

You can use these bumps in price to sell at the right time.

Learning how to flip sports cards on eBay has a few moving parts to it. However, there are a few strategies to think about when wanting to earn a side-income with cards.

Choose one of these strategies as a way to flip cards and get good at it!