Kevin McHale is the legendary Boston Celtics power forward, he is a 3-time NBA Champion, and a Hall of Famer who played alongside Larry Bird and Robert Parish. Drafted 3rd overall in 1980 — right after bringing home the Gold medals while representing Team USA at the Pan American Games in San Juan and the Universiade in Mexico City in 1979 — Kevin McHale was ready for the League right away.

With 7 total NBA All-Star games in his resume, McHale has made his first All-Star appearance already as a bench player. He was a notable reserve and a key player for the Celtics, even when not starting yet. As proof, the big man has won the Sixth Man of the Year award two times, back to back: in 1984 and 1985.

Upon hanging his sneakers, McHale has tried a hand at the front office and coaching work with the Minnesota Timberwolves. He later was named the head coach of the Houston Rockets and did a pretty good job with them for 3 seasons.

Coach McHale has led the Rockets to the 2015 NBA Western Conference Finals, where they only lost to the Golden State Warriors — who eventually went on to win it all that year.

As one of the greatest power forwards to play the game, Kevin McHale is also a proud member of both the 50th and the 75th NBA Anniversary teams. 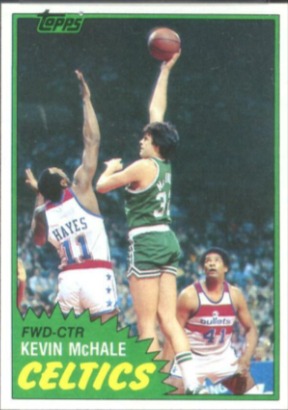 It’s McHale’s first card ever — and his official rookie card. The card was released by Topps the next year after McHale was drafted to the NBA, and was included in the 1981 Topps basketball set.

Designed as a full-color quality photo image with the Celtics green frame and the white border around it, the card features Kevin McHale in beautiful action: taking a signature hook shot over Elvin Hayes. McHale’s playing position (abbreviated to FWD-CTR) is placed in the partial starburst in the lower left corner, together with his name and the team name in bold yellow.

The 1981 Topps basketball set had 66 cards in total (the so-called “National” set), but Kevin McHale RC #75 was part of the regional subset called “East” which had 44 cards in it. Similarly, the “West” and “Midwest” subsets were also issued by Topps and distributed in the respective regions. Each subset had 44 cards, so the grand total amount for the entire 1981 Topps basketball set is 198 cards.

The set is somewhat significant because of the fact it was the last set released by Topps before they pulled out of the basketball card game — until getting back to it in 1992. The 1981 Topps basketball set is also unique because of the aforementioned National + regional distribution strategy. Additionally, the “East” regional subset, which this Kevin McHale RC is part of, is harder to obtain than the main, “National” set.

Kevin McHale clearly dominates the set too — being the only Hall of Famer rookie on it.

Other players in the set and the subsets include Larry Bird, Magic Johnson, Julius Erving, Kareem Abdul-Jabbar, George Gervin, Bill Laimbeer (RC) and others.

This Kevin McHale Upper Deck Legends card is the first relic card ever released for the legendary big man.

This 2000 Upper Deck Kevin McHale relic card was dropped during the 2000-01 season as part of the Upper Deck Legends basketball set, and was included in the subset called Legendary Jerseys. Inserted one in 23 packs, this type of card is deemed somewhat rare, and the subset boasts such NBA legends as Bill Russell, Julius Erving, Kobe Bryant and Michael Jordan.

The design is black, white and silver, with McHale’s photograph on the right, and the box with his game-worn jersey on the left, just underneath the Legendary Jerseys logo in silver, sparkling letters.

The card is considered a notable one, because in the 1980’s there were no cards that contained a piece of game used material such as a jersey, and card companies did not introduce such an option up until 1997. So the 2000 Upper Deck Legends Kevin McHale #MC-J is his debut memorabilia card and is certainly respected in the hobby.

Similarly to the situation with relic cards mentioned above, there were no official autographed options back in the 80’s when Kevin McHale played, so his first signed card didn’t come out until 2004.

The 2004 SkyBox Premium Proven Performers is Kevin McHale’s first official autographed card, which makes it a truly notable piece of cardboard. Part of the SkyBox Premium “Proven Performers” basketball set released as a collaboration between Fleer and SkyBox International in 2004-2005, the Kevin McHale #15PR definitely stands out — as being McHale’s debut at official sports card signing. The interest for this card from fans and collectors grew even further after the big man committed to doing a series of autographs for Panini in the following years.

The 1986 Fleer Kevin McHale #73 is arguably Kevin McHale’s second best notable card — or at least a Top 3 choice for sure, besides his rookie.

This card belongs to the 1986 Fleer Basketball set, which clearly is a high-end set and is widely known to the hobby people and basketball enthusiasts alike. The most popular card from this set is the Michael Jordan rookie, but it doesn’t end there. The star-studded 1986 Fleer Basketball set also holds such prominent rookies and future Hall of Famers as Danny Ainge, Charles Barkley, Clyde Drexler, Joe Dumars, Patrick Ewing, Karl Malone, Hakeem Olajuwon and Dominique Wilkins. Other legends in the set include Larry Bird, Magic Johnson, Kareem Abdul-Jabbar, Julius Erving, George Gervin, Moses Malone, Isiah Thomas and more.

The recognizable and distinctive design of this card adds up to its popularity. You have surely seen the classic red, white and blue border before — and probably on the Michael Jordan RC. For McHale #73, the big man is pictured under the basket, in his dark green Celtics jersey, laying up the ball with power. The photo is placed in a thinner yellow border, with the player’s name, team and position on the bottom of the card.

The 1986 Fleer Kevin McHale is pretty affordable, and being from the legendary set, if you can find it well-centered and in good condition, it’s definitely a must-have.

Finally, another second-best — or, as some collectors would argue — the best choice after the official Kevin McHale rookie. Meet the 1983-84 Star Kevin McHale #34.

Part of the meaningful 1983-84 Star Basketball set, this card commands attention already. The set was the first major release for Star Company — the only card brand that was in business after Topps pulled out in 1982. The 1983-84 Star Company Basketball checklist features 275 cards, with 12-13 cards per team. Some notable players in the set include Larry Bird, Clyde Drexler, Julius Erving, Kareem Abdul-Jabbar, Magic Johnson and Isiah Thomas.

The design used on this card would remain virtually the same in the later official NBA basketball card products that Star Co. would release over the entire period from 1983-84 to 1985-86. It’s rather simple: the background is done in team color (for McHale it’s Celtics green) with STAR ‘84 in the upper right corner, the team logo in the lower left, and the player’s name and team name on the bottom.

Another reason the 1983-84 Star Kevin McHale #34 gets proper attention from the sports card world, is that it was released as a short print. It is harder to obtain this McHale card than most cards in the set, so it surely makes it a desirable item.

All of the Kevin McHale cards we have reviewed are worth taking a look at. Most of them are affordable and can be found for a reasonable price, plus in a good condition.

Try to hunt for a Kevin McHale relic card with his game-worn jersey, or for his first official autographed card. They all are definitely worth it, especially if you’re a fan of the Celtics great.

But the best Kevin McHale card on the market would probably be his rookie — the 1981 Topps Kevin McHale (East) #75. It’s also beautifully designed, features a nice action photo, and is part of an interesting set.