So now you’ve seen the best Magic Johnson rookie cards, but what about his other cards?

Let’s take a look at the 6 best Magic Johnson cards that came out later during his career in the NBA. 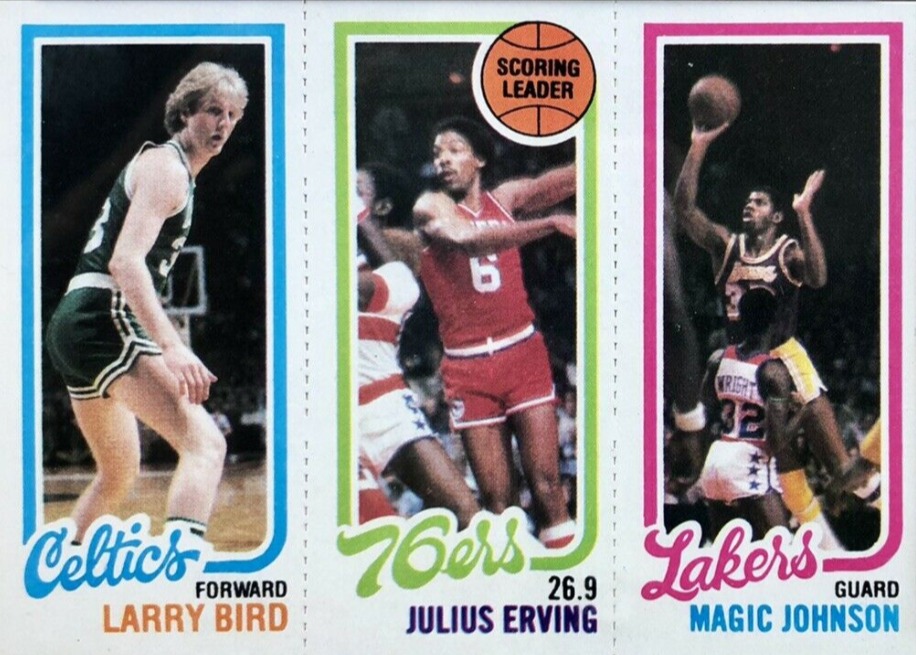 I’ve spoken about this in my Larry Bird rookie card article too, but it obviously deserves mention here.

Two of the greatest rivals in NBA history sharing a rookie card is one of the cooler coincidences in the hobby – then you add in Dr J on this card too and it’s instantly a grail card for many. In 1981, Magic Johnson signed a record deal with the Lakers despite suffering a string of injuries during the 1980/81 season.

The Lakers knew fully well just how talented Magic Johnson was, so they couldn’t risk losing him. And the massive contract soon started paying dividends for the Lakers. Many people, including Magic, say that the 1981/82 season was the one when the Lakers transformed into a great team.

Johnson went on to win the NBA Final MVP award in 1982, which was his second award of that type already in his young career. It was also a great season for the Lakers, which won the Finals that season as well.

This Topps card celebrates the on-the-field successes of the Lakers and Magic Johnson that season.

It’s one of the most highly sought-after Johnson non-rookie cards because it still comes from an early part of his career. The second reason is that the card is made by Topps, which at the time, was the go-to card company for most collectors.

However, this was also the last year that Topps produced basketball cards until 1992, so this remains to be one of the most popular MJ cards of all time. 1982 was the year that marked the start of a dark era for basketball cards; from 1982 to 1986, there weren’t that many cards from major card companies for basketball, which is a shame considering how many great players were in the league at that time.

But in 1986, basketball card fans got their satisfaction with this 1986 Fleer basketball set. This was to be one of the most iconic basketball sets of all time, featuring great players – the leading figure is, of course, Magic Johnson himself.

The card is legendary for another reason, and that is its looks.

The red, white, and blue borders are easily recognizable and it’s something that many card companies have tried but failed with in the past. But in 1986, Fleer got it right with their card set.

Plus, the image on the card is quite attractive, as it manages to showcase the incredible athleticism of Magic Johnson.

Overall, this card is one of the more expensive Magic Johnson cards out there, even though it’s not a rookie card. But in some ways, it feels like a rookie card because of the closure of the basketball card releases after 1982. Considering that basketball cards were far and few between during the years between 1982 and 1986, this Star basketball set was a cure for the despair of basketball fans and card collectors at the time.

While this card is not as recognizable as the early Topps cards from 1980 or 1981, or even the Fleer card from 1986, it still ranks among the top Magic Johnson cards because of how hard basketball cards were to find in that time.

Between 1982 and 1987, the LA Lakers and Magic suffered a bit of a worse period in the NBA, at least when compared to the earlier and especially later years in the Magic Johnson career.

But that was not necessarily because the Lakers were so out of form, it’s just that they faced a Boston Celtics team with Larry Bird, who managed to win the NBA finals in 1984 and again in 1986.

This Star Magic Johnson card is easily recognizable by its yellow border and overall yellow design. On the card, you can also see the Lakers’ power forward at the time, Kurt Rambis with the #31 jersey. In the NBA Hoops card from 1993, we have one of the most iconic basketball cards in history.

This card was a redemption, but despite that fact, it is a card that will cost you quite a lot of money.

The main reason for that is of course, that you have two of the biggest basketball legends crammed in one card together.

Also, the card featured on-card autographs which at the time, was not very common. In this regard, the card was ahead of time and some collectors were prepared to spend thousands to get their hands on this beauty.

By the time this card came out, Larry Bird had already finished his career in the NBA with the Boston Celtics, while Magic Jonson was already officially retired because of health problems, but eventually returned to play and coach in 1994 and later, in 1996.

If you decide to get this card, make sure that you pay attention to fake autographs, because you might see some ungraded cards like this that might have a counterfeit autograph. If you want to make completely sure you don’t encounter that, go for graded cards. In 1996, Magic Johnson returned to the NBA as a player, and this card recorded this phenomenon.

The decision to return as a player sent some shockwaves across the country and around the world. MJ already officially retired in 1991, but in 1996, he decided to revive his career and come back.

This remains to be one of the most popular Magic Jonhson cards and certainly his last official card before he ended his basketball career in the NBA (he also played briefly in the coming years in Sweden and Denmark).

There’s also a refractor for this card which is a bit more valuable than the base card itself. The card that you can see in this image is the refractor version, which was a bit shinier and of slightly better quality, as well.