Elvin Hayes — the legendary power forward with tenacious defence and aggressive offence, was a true staple in the NBA. A 12-time All-Star, an NBA Champion with the Washington Bullets and a Hall of Famer, “the Big E” has definitely earned his spot on the NBA’s 50th and 75th-anniversary teams. Hayes currently ranks fifth for all-time games played (1,303) and third for total minutes played (50,000), having missed just 9 games in his 16 years in the league — making him one of the most durable players in the history of the game. 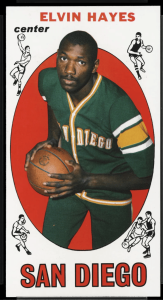 The best Elvin Hayes rookie card, without a doubt, is the 1969 Topps. It is the earliest release of Elvin Hayes cards ever and the first official one. This Topps card is considered Hayes’ truest Rookie Card, and being his most popular, certainly ranks the best among collectors.

The 1969 Topps Elvin Hayes RC sports a design (colloquially called “Tall Boy”) that most hobby people will recognize, especially those into vintage NBA cards. Player’s name and position on top, the team on the bottom, colorful oval in the background, and black-and-white basketball art in the corners are the elements that make this basketball card stand out.

The 1969-70 Topps Basketball Complete Set that this Elvin Hayes rookie card was a part of, had 99 cards of the same design in total and had some of the all-time greats of the game.

This edition was the first comprehensive basketball release in eight years, plus the first Topps basketball piece since 1957. The 1969-70 Topps Basketball Complete Set has won the PSA Set Registry Award nine times — so you can tell the cards that were in it, including the Elvin Hayes rookie card, are all notable content-wise and have historical significance.

Some other rookie cards in the set might seem more notable, but the 1969 Topps Elvin Hayes RC #75 is surely an outstanding and elite card, especially if it’s in mint condition and highly graded.

Designed as a ruler depicting the player’s height, the insert is easily recognizable by the drawing of the player’s cartoon character on the right and the player’s name and team on the bottom.

The 1969 Topps Rulers were made of thin paper — that’s why the inserts are not too durable. This particular Elvin Hayes #4 is hard to find in good condition, nevertheless, there are some mint inserts of this type in the population.

If you love vintage NBA, consider adding this piece to your collection. 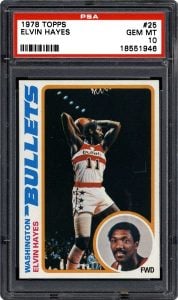 This 1978 Topps Elvin Hayes card is another notable card of the NBA legend. With almost a decade in the league at that time, Elvin Hayes was a true star and fans already loved him a lot for his vicious efforts on both ends of the floor. The Big E gained All-Star selection each consecutive year, including his rookie season — and with every next year, his popularity continued to grow.

Design-wise, busy card fronts feature a color photo with the player’s name and his team identified in vertical lettering along the left edge; a small headshot of the athlete is placed within a circle at the card corner, along with his position.

Overall it’s a fairly popular card among Elvin Hayes fans and collectors, but lacks in big market popularity and is considered low-end. 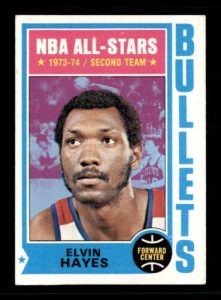 This All-Star edition of the Elvin Hayes was issued to honor his appearance in the 1973-74 NBA All-Star Second Team, and is considered a notable card because it belongs to an important set.

Called “A Dazzling and Distinctive Set that Introduced the Iceman”, the 1974 Topps was definitely one of a kind. It was the first appearance on the cardboard not just for George Gervin a.k.a. The Iceman, but also for Bill Walton, Doug Collins and George Karl.

The 1974 Topps Elvin Hayes card is easier to obtain than the Gervin or Walton rookies, of course — but it’s still a solid Hayes card and remains attractive for hobby people and his fans alike. 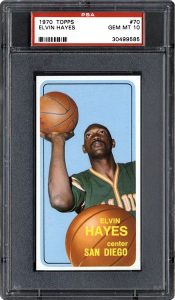 Now, this is a great sophomore card! Released for Elvin Hayes’ second year in the NBA, the 1970 Topps is perhaps the most notable out of all alternatives besides his RC’s.

This card has a minimalistic design with a color likeness set against a colorful backdrop (sky blue for Hayes) on the card’s front, and a basketball logo at the lower right corner bearing the player’s name, position and team.

The 1970 Topps set itself was a big one that year too. It included 175 cards, featuring the legends Bill Bradley, Wilt Chamberlain, Elgin Baylor, Lew Alcindor (Kareem), Oscar Robertson, Walt Frazier, Jerry West, and the rookie cards of such players as Pat Riley, Calvin Murphy and Pete Maravich.

If you’re looking to acquire an Elving Hayes basketball card for your collection, you certainly have a few choices. From affordable options like his All-Star edition, or from his later years in the league — to Hayes’ sophomore year card, which unquestionably is one of his top cards.

Your best choice though would be one of his rookie cards for sure. While the Topps Ruler option might be discussable (unless you can find it in great condition), the 1969 Topps Elvin Hayes RC #75 is — hands down, the best Elvin Hayes card out there.