The 1st edition base set Shadowless Pokémon set is one of the rarest and most sought-after by collectors, and for a good reason. The cards were the first ever Pokémon cards to be released in the English language, marking a turning point in the popularity of the Pokémon Trading Card Game.

The Shadowless cards were released in 1999 as one of three different variants, with 1st Edition Shadowless, Shadowless, and Unlimited cards filling out the trio. Shadowless base set cards are far more valuable than Shadowless and even more difficult to come across. 1st Edition cards can only be spotted by the prominent badge appearing under the card’s artwork.

To spot a Shadowless card, one must look at the background set behind the artwork of the Pokémon. These cards feature a clean background, while regular cards have easy-to-spot dark gray clouds and swirls. Below, we’ll look at the most valuable Shadowless Pokemon base set cards and speak to their extraordinary makeup.

If you’re into Pokémon card collecting or want to start – this set is the goal.

We’ve analyzed every card in the set – here’s our top five, with a bonus couple because it’s a hard list to cut down; there’s too many rare and valuable cards in this expensive Pokemon card set to stop at five. 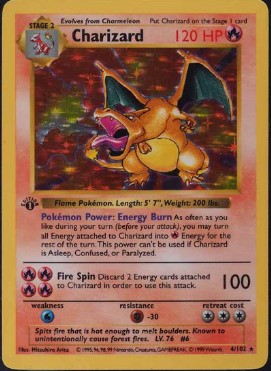 Although this card and every Shadowless card dates back to 1999, it’s just as fun to compare them to the modern competitive world of Pokémon TCG. Energy Burn is a useful attack that allows Charizard to take advantage of every form of Colorless Energy in your deck. Fire Spin requires a constant replenishment of Energy, but deals 100 HP of damage.

As one of the most valuable cards to exist today, it’s unlikely that you and I will ever be fortunate enough to have 1st Edition Shadowless Charizard included in our collection. Big-time celebrities have become infatuated with 1st Edition Charizard as the card has become somewhat of a treasure hunt. The myth of the card alone is exciting enough to follow however, and as the years pass, its legend will continue to grow.

It’s one of the most valuable pokemon cards in existence – and if you find a PSA 10 Charizard, it’ll set you back a fortune. A true trophy card for any collector. 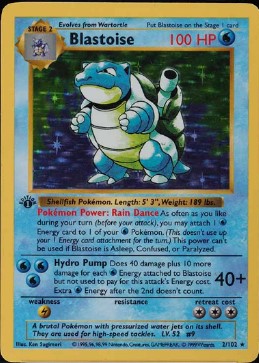 The second of Generation 1 starters featured on this list, 1st Edition Shadowless Blastoise has earned its spot among the most valuable of collections. Although not as popular of a figure as Charizard, our favorite cannon turtle stands tall in this card’s classic artwork.

Rain Dance, Shadowless Blastoise’s first attack, allows a player to stack up on the required Energy to power Hydro Pump. The attack’s base power is fairly weak, but can be boosted to considerable levels. Even with attacks that don’t blow you away, it is still one of the most formidable Water Pokémon cards available in this set.

Blastoise and other Generation 1 Pokémon tend to be overshadowed by their more popular counterparts in Charizard and Mewtwo, so it’s encouraging to see the water starter on this list. Here’s hoping that Blastoise continues to make waves in future card sets. 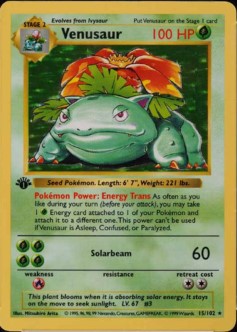 Mean, green, and not so lean. Venusaur, the final of the three Generation 1 fully-evolved starters, has risen to one of the most valuable 1st Edition Shadowless cards. This card’s artwork feels much more unique than the rest, as Venusaur has never looked quite so menacing and toad-like.

The Venusaur card Energy Trans is quite a unique attack, as it pairs well with other grass-type Pokémon in your deck. Venusaur is well paired as a tanky Pokémon alongside a card like Vileplume, who features a much better attack in Petal Dance. Unfortunately, Shadowless Venusaur’s Solarbeam just doesn’t pack much of a punch.

Any collector looking to feature the ‘Big 3’ starter Pokémon in their collection can’t forget about 1st Edition Shadowless Venusaur. Although the card isn’t much use in competitive play, the artwork alone makes the card unforgettable. 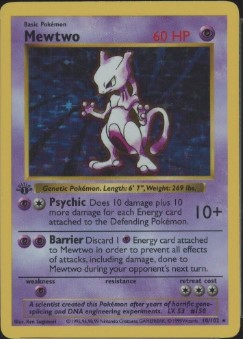 It wouldn’t be a list of valuable Generation 1 Pokémon cards without the inclusion of the all-powerful Mewtwo. The most popular villain of the Pokémon world, 1st Edition Shadowless Mewtwo’s artwork features the psychic humanoid set against a dark starry sky.

Shadowless Mewtwo is vulnerable thanks to its low HP, but can negate this weakness with its Barrier attack. Barrier blocks any effects and damage done against Mewtwo during your opponent’s next turn. Psychic isn’t the best attack for dealing damage, but can be boosted with a healthy stack of Energy.

Mewtwo’s notoriety as Pokémon’s first baddie lands it squarely on this list of valuable Shadowless cards. Much like Charizard, Mewtwo has a sort of magnet pull with fans that boosts its value within any set of cards it appears in. 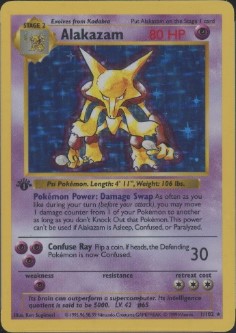 Everyone’s favorite spoon-wielding, mustache-wearing, wizard fox Pokémon is one of the most valuable among the First Edition Shadowless card set. Much like Shadowless Mewtwo, this card features a unique purple hue that sets it apart from the rest.

Alakazam’s Damage Swap attack is timeless and is comparable to Damage Change, a much newer move in the Pokémon TCG. Confuse Ray is a reliable attack still used by new release Psychic-type cards. All-in-all, Shadowless Alakazam has the toolset to quickly disrupt your opponent’s strategy.

First Edition Shadowless Alakazam may not be the most popular Pokémon featured on this list, but its artwork and coloring alone create enough unique value for collectors. The card has earned its spot high on this list. 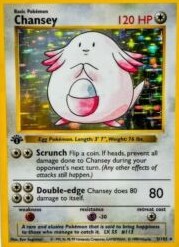 1st Edition Shadowless Chansey is an unusual addition to these rankings. The Pokémon is very strong in its own right thanks to its tanky HP, but isn’t typically considered to be one of the more popular Generation 1 Pokemon. The card’s high value is largely tied to the fact that it is extremely difficult to find in good condition.

In terms of competitive play, Chansey is quite hard to take out. In combination with its high HP, the attack Scrunch can easily negate any incoming damage from its opponent. The downside of this card is potential damage dealt, its other attack Double-edge may not be worth the cost of Energy due to self-inflicting blows.

If you’re holding onto a 1st Edition Shadowless Chansey, it may be worth looking over the card’s condition. Many collectors may not know what they have, as this card can be easily overlooked. Who knows, you might even have a gem mint version hidden in a binder somewhere.

Generation 1 wouldn’t be complete without Pikachu, the most popular figure in the world of Pokémon today. 1st Edition Shadowless Pikachu is on this list for more than name recognition alone, as the card carries one of the more interesting stories among Pokémon cards today.

Shadowless Pikachu, also referred to as Yellow Cheeks, was once released with a different design. When the Pokémon TCG made its arrival in the West, a decision was made to color Shadowless Pikachu’s cheeks red to make the card more recognizable for English fans that recognized the Pokémon from video games Red & Blue. Altering the card was quickly realized as a mistake, and now two versions of Shadowless Pikachu exist – one with Red cheeks, and the original Yellow cheeks.

Today, Yellow Cheeks remains much more valuable, particularly with the 1st Edition badge attached. The card itself is essentially worthless in competitive play, as most Pikachu cards are. Let’s be honest – the little guy has never been known for his strength in battle.

Shadowless Pokémon cards have become a cultural phenomenon since their release in 1999. 1st Edition Shadowless cards are by far the most valuable, but holding any type of Shadowless card is like owning a piece of history. After The Pokémon Trading Card Game was released in the English language, the collection truly became a worldwide sensation.

If you’re fortunate enough to have a Shadowless Pokémon card in your possession, be sure to take good care of it. Humidity can damage trading cards quickly, so keep your collection inside in a cool space. Keep your Shadowless cards in the shadows – that is, avoid direct sunlight to prevent any fading.

If you plan to transport your collection or take it on the road, consider placing your cards within a top loader – these hard plastic shells will provide layers of protection your Shadowless Pokémon deserve.

Most importantly, have fun with your collection. While Shadowless Pokémon cards are incredibly valuable, it can be easy to forget the historic change they represent. The cards also offer a level of Generation 1 nostalgia that the biggest Pokémon fans will always treasure.