Mewtwo is one of the central characters in the Pokemon universe, and it’s easy to see why it’s so popular. If you’re looking to get yourself the best Mewtwo Pokemon card possible or if you just want to check if the one you own is any good, read on. 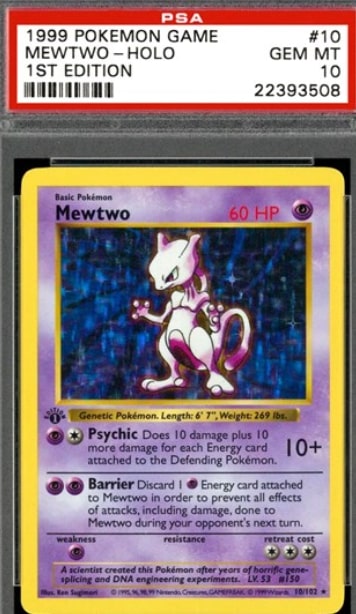 This here is THE best single Mewtwo Pokemon card you can get yourself right now. It’s the legendary edition of this card, as it’s the first edition ever to be printed of Mewtwo, which will naturally increase its value.

The main distinguishing factor is the 1st edition stamp, which is unique to this card and can’t be found on any other cards on this list, even if they might appear similar at first sight. It also uses the shadowless character box, which will appeal to some collectors more than the shadowed design.

It has that classic Pokemon card look and feel to it, too. This design will likely never get old, and it’s the classic design when it comes to Pokemon cards that will never let you down if you own old cards like this one.

So if you have this card in your collection, you can count yourself lucky. As long as it has the 1st edition stamp, then you’re golden. A card like this can be relatively expensive for Pokemon cards, especially if you have a PSA 10 or a PSA 9 – which is hardly likely for most collectors unless you’ve been keeping good care of it.

PSA says it has graded 81 PSA 10 cards of this type, although there are plenty more PSA 9s and PSA 8s to be had, so if you’re looking to buy a card like this, it might be worth looking at those, too. A PSA 10 or 9 will cost several thousand dollars, while a PSA 6 can grab a few hundred bucks, too. 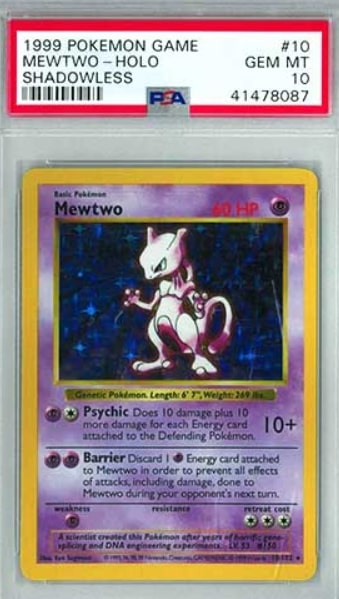 You might be looking at this card and thinking: “What is the difference between this one and the first one? They look exactly the same!”

And you aren’t very wrong in your estimation. They DO look the same, that’s because they are (largely) the same in terms of design. The main difference here between these two is that the first card is from the 1st edition, while this one comes from the second printing run. There were three prints of this card altogether.

Even though it’s not as rare as the first edition card, it’s still rarer than the third print which had an unlimited run. This means that the price of this card will be slightly lower than that of the 1st edition, but it can still command a relatively steep asking price. It’s the shadowless design that’s so valuable and desirable when it comes to pokemon cards, and this one dons it.

Overall, it’s less expensive than the 1st edition card, but still on the higher end when it comes to Mewtwo Pokemon cards. Even though you will probably struggle to find a sensible price for a PSA 10, you will probably not have any problems finding lower graded cards for a reasonable price if you’re looking for that shadowless design. 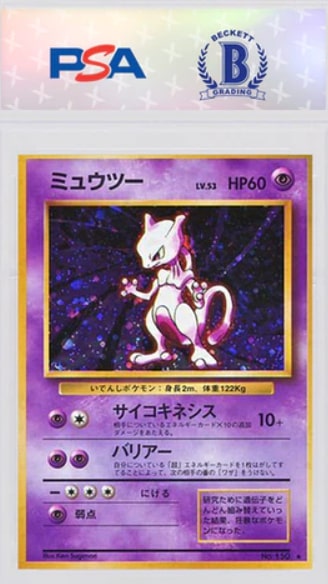 If you just want the oldest version of Mewtwo Pokemon cards, then you must take a look at this Japanese version from 1996. It’s vastly similar to the other two cards we’ve just featured, albeit with Japanese writing on it.

But even with the rarity symbol, this card can command a high fee. These are extremely hard to find. The main problem will be finding one in at least decent condition. Initially, these cards were not preserved that well, so there will not be many PSA 10s. But if you can accept a lower quality card, then there’ll be no problem, as long as it’s genuine.

In terms of prices, you’re looking at several hundred dollars and potentially more if the card doesn’t have the rarity symbol. Get this card if you’re not bothered by the Japanese writing on it and you just want the earliest card printed of this type possible. 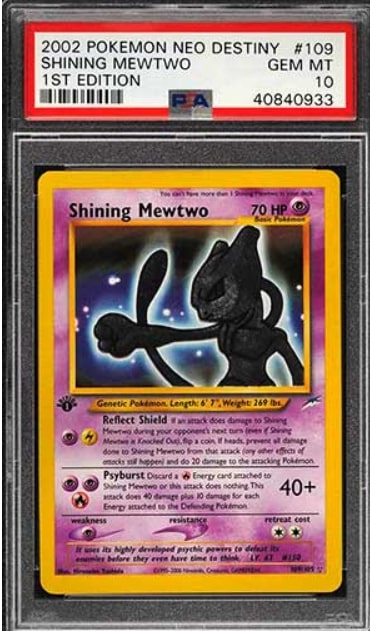 Oh yeah, the shining Pokemon cards were the holy grail of Pokemon cards in the early 2000s. Collectors used to go crazy for these, and they were prepared to swap some decent cards just to get a shining card of a special character like Mewtwo.

Today it’s no different. Shining cards usually go for more than regular cards, especially from the early(ish) days of Pokemon cards. If you take a look at this one, it’s not the first Mewtwo card to be printed nor is it the rarest, but it can still be relatively valuable.

There’s a healthy mix of both English cards and Japanese cards of this type. You will generally have a decent amount of options when it comes to both types of this card – there are a couple more English cards than Japanese cards, sitting at around the 300 mark. The main difference between the two is that the English version has the Psyburst portion printed out differently – on the Japanese, they’re stacked horizontally. 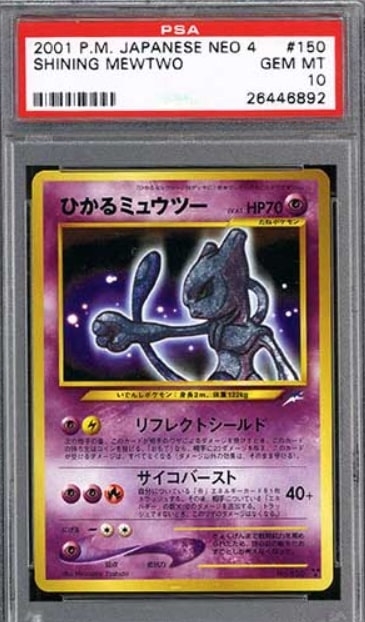 Here’s the Japanese NEO version we’ve talked about before. Once again, you might struggle to find huge differences between the English version and the Japanese one – except for the obvious which is the Japanese writing, of course.

Here, the entire card is holographic instead of just the background of the card. And another very tiny difference is the layout of the character’s energies, where the three symbols in the second column of the text are lined up horizontally, while they’re different for the English card.

The Japanese NEO shining Mewtwo is also rarer than the English version. Just over 150 cards of this type have been graded by PSA, and only a bunch of them have been PSA 10, so if you really want to have this card, you might have to accept that it won’t be a PSA 10. 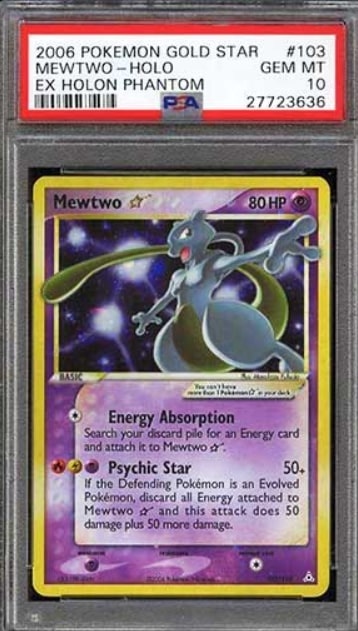 Gold star cards have always been popular among Pokemon card collectors. They have a very distinct design compared to the base sets, which is why they’ve always been preferred by avid collectors ever since they came out.

These cards were illustrated and designed by Masakazu Fukuda, a Japanese artist that specializes in these types of cards, and it shows. The entire layout of the card is different with this card, as is the main image of Mewtwo on the top of the card, which seems to be a bit more pronounced here.

Plus, Gold stars were always hard to get. You might only have gotten this card from a set if you were lucky, and they only popped up every 100 cards or so. All of that means that this rare card can be quite expensive, especially if you have kept it well, or if you’re looking for a top-graded card.

Nevertheless, this card seems to have the highest population of PSA 10 cards out of all cards we’ve just taken a look at. It can still cost more than $500, and sometimes significantly more than that. 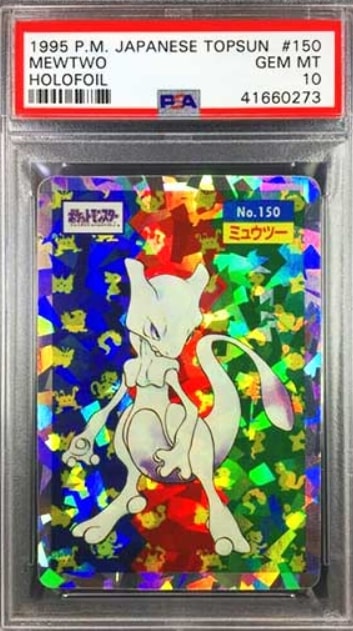 As you may see, this Japanese card is vastly different from the rest we’ve just seen. These were especially typical for the early Pokemon cards that were distributed all over Japan in vending machines.

Compared to other cards of Mewtwo, this was first meant as a purely collectible card, as it has no stats and features on the card like other cards that can be used as game cards. They’re still popular, though.

Firstly, it’s because they’re so different from the rest. It’s so colorful and shiny, which will appeal to some collectors instantly. It also comes from a very early period of Pokemon cards, and it might just be the earliest card out of all Mewtwo Pokemon cards we’ve featured so far.

The main problem will be getting one of these in top condition. Only 9 or so of these cards are in gem mint condition, meaning that you might have to pay a premium price to get it. Even in lower grades, it can cost several hundred dollars. 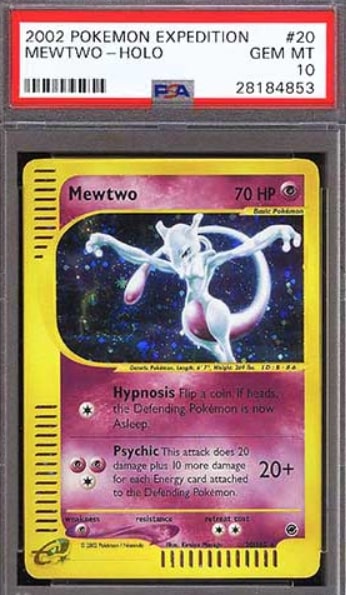 2002 was a great year for Pokemon cards. This was a new type of design that Pokemon cards started using, and it’s slightly different than what we’ve seen before. The biggest difference is the larger golden border around the card.

The reason for that large piece of border is because it’s used to accommodate the scanning bars, which were utilized by the Nintendo e-Reader, so these cards were also meant to be used with that reader.

There’s a relatively low number of these 2002 Mewtwo cards, so the prices can get quite high for a PSA 10 – usually a few hundred dollars. You will get a much lower price for an average card, though. 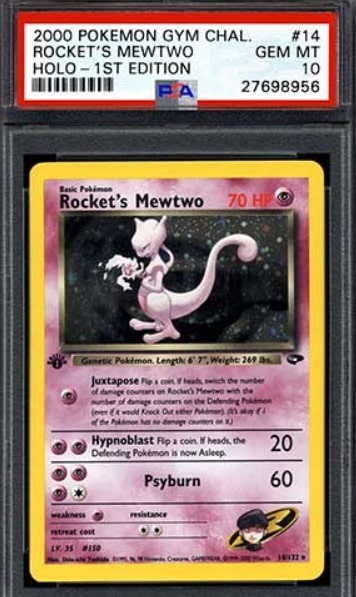 This card is particularly different from most earlier Mewtwo cards in the style they had and the abilities of Mewtwo. First of all, the card has added the “Juxtapose” ability, which was new to Mewtwo at that time.

Also, the image, or the artstyle, for Mewtwo is slightly different here. You can see that it’s depicted from a slight angle. If you own this one, you can expect to sell it for a few hundred dollars at most, but not for that much if you have a lower graded card of this type. 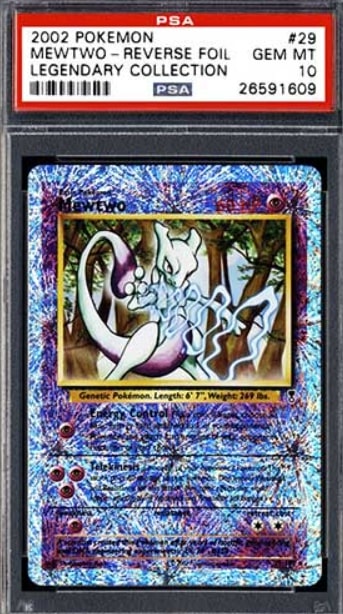 This is one of the most interesting-looking cards on this list, and the surprising thing here is that you can get this card for a relatively low price. The reverse foil design from the Legendary Collection of 2002 is still among the most popular Mewtwo cards, though.

This card was meant only for the US market, so it’s not as widely available as some others that were also distributed in Japan. They’re relatively hard to get nowadays, so you might consider yourself lucky if you own this one. 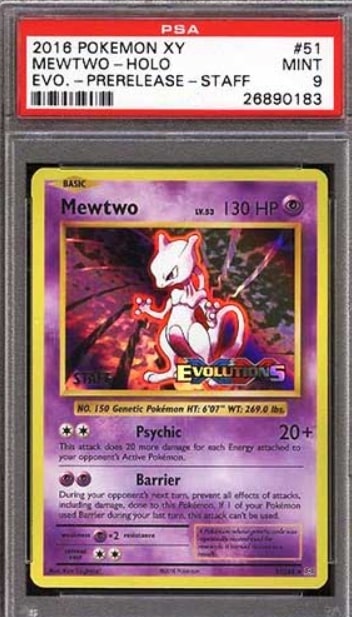 This card was intended for the prerelease party and was only meant for staff members to own it, so it’s pretty rare. The main distinguishing feature that increases the price of this Mewtwo card is thus rarity. This card was only one of the four cards that was available to get, along with Charizard, Machamp, and Gyarados.

So, these are the main and most valuable cards of Mewtwo, but there are also some neat cards that will not cost as much but can still be great cards to own, such as: 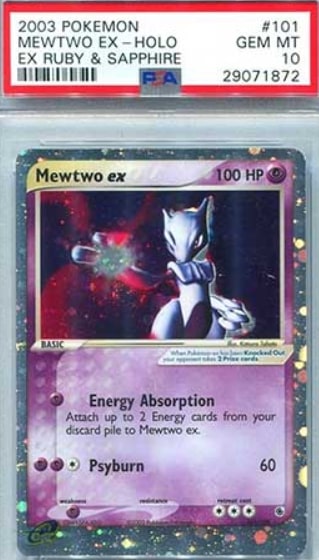 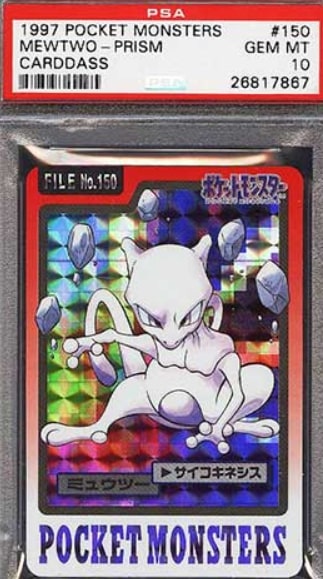 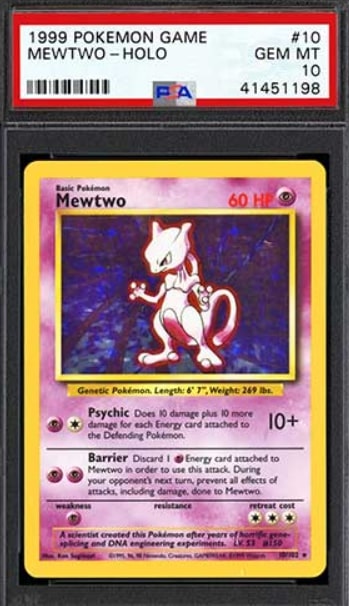 There are plenty of great Mewtwo cards available to buy – I suggest eBay as a go-to for buying cards.

1999 Pokemon Base Set: Choose Your Card! All Pokemon Available!