Since the first cards were released in October of 1996, the Pokémon trading card game (TCG) has been a global phenomenon in the collectible industry. While many card owners are genuine players of the actual TCG, a large portion of buyers collect to build a valuable collection

Pokémon celebrated its 20th anniversary in 2016, which led to a massive year of TCG releases, video game releases, and brand-new merchandise. As part of the anniversary celebration, two significant expansions were released in Generations and Evolutions. Both of these expansions were designed to commemorate Generation 1 Pokemon.

Four other expansions alongside Evolutions were also released under the XY Break Series. Let’s take a closer look at the most valuable cards from this banner year of the Pokémon TCG.

The Top 5 Most Valuable 2016 Pokémon Cards 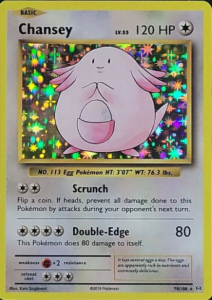 On the surface, the Chansey XY – Holo Rare may appear on the plainer side, but as a part of the Evolutions expansion, this card plays tribute to the original Chansey Card from 1999. Unlike many other cards on this list, Chansey isn’t Full Art but is simply a Holo Rare card.

Chansey XY doesn’t carry much competitive ability either, as Scrunch and Double-Edge are underwhelming attacks. Double-Edge requires a significant amount of energy for an attack that deals as much damage to the user as it does to its opponent.
Chansey’s value is driven purely by nostalgia and availability. 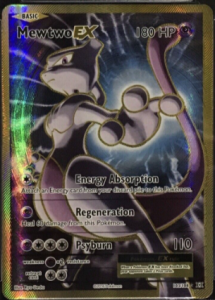 The Mewtwo EX – Full Art Ultra Rare is a beautiful card design. Featuring our favorite Pokémon baddie, Mewtwo is posed and ready to blast away the competition.

Energy absorption is a handy attack that will allow you to charge up for Mewtwo’s powerful Psyburn. Regeneration also heals 60 damage, allowing you to keep your mighty Mewtwo on the field for longer.

Mewtwo cards will always boost better-than-usual value, considering how popular of a Pokémon it is. One of the more popular and rare cards featured in the Evolutions collection. 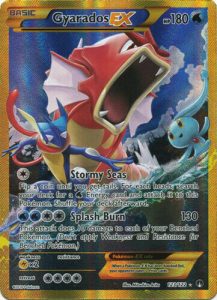 Shiny Gyarados is one of the coolest-looking Pokemon ever, and the Full Art Ultra Rare card from the BREAKpoint collection certainly does it justice. The design is in-your-face intimidation, as any artistic representation of Gyarados should be.

Gyarados EX also features significant attacks, especially the unique Stormy Seas. Depending on your luck, you’re given an excellent opportunity to load up on energy for Splash Burn. Just be wary of damaging the other Pokémon on your bench, as they’ll take ten damage each time Splash Burn is used.

While this card isn’t a part of Evolutions, it still features a Generation 1 callback to everyone’s favorite water dragon. 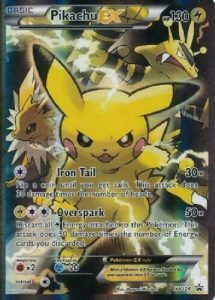 Pikachu has never looked cooler than they do on the Pikachu EX – Full Art Ultra Rare. A promo card included within the BREAKthrough expansion, Pikachu is featured alongside other elite electric types in Jolteon and Electabuzz. The Generation 1 nostalgia hits hard with this card.

Regarding competitive play, the Pikachu EX card is one of the more valuable cards on this list. Its two attacks – Iron Tail and Overspark – can deal massive damage. Both attacks don’t require much energy to be used, either.

Like Mewtwo cards, Pikachu cards tend to carry more value no matter what set they’re featured in. You can chalk this up to Pikachu being the most-marketed Pokémon to ever exist. 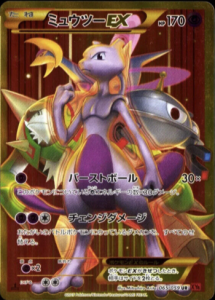 The Secret Rare Mewtwo EX is my favorite card on this list. The design features a commanding Mega Mewtwo Y flanked by Chesnaught, Magnezone, and Cresselia. The card is bright, colorful, and sure to catch the eye of any collector.

This card features a modest 170 HP, but an attack like Shatter Shot can quickly change the tide of battle thanks to its damage-multiplying ability. Once your card has taken heavy attacks, Damage Change allows you to exchange damage with any of your opponent’s Pokémon.

As previously stated, Mewtwo cards get a value boost thanks to the ‘Mon’s overwhelming popularity.

Factors That Affect a Card’s Value

There are several different factors that contribute to a Pokémon card’s value. Because of this, each card is unique and should be valued as such. The most significant factor is a rarity, or how standard a card is in its respective packs.

The rarity of Pokémon cards is very much on a spectrum, varying from Common basic cards to the highly sought-after Secret Rares. Other than availability, appearance and game mechanics separate the most valuable cards from the rest.

As discussed with the Mewtwo and Pikachu cards in the list above, a Pokémon’s popularity can also demand a higher value. It also helps that the most-marketed Pokemon are typically featured within card expansions, further contributing to their popularity.

The difference between a poorly cared for card and a card graded highly can sometimes be thousands of dollars. Card quality carries tremendous value and should always be a top priority for collectors looking to sell. Organizations such as PSA offer a card-grading service and will grade any card for a fee. PSA 10 cards (the highest grade possible) often sell for 350% more than a PSA 9 card. Which is crazy when you think about it – but that’s what happens.

Read this article if you want to know more on prepping cards for PSA grading.

Market demand is another factor that plays a massive role in the value of Pokémon cards. Demand typically follows the newer expansion releases as players and collectors scramble to get the newest and most significant cards. Unfortunately, scarcity also plays a considerable role in demand. Days after release, the supply at local toy stores is wiped out by scalpers trying to make a quick buck.

How to Care for Your Valuable Pokémon Cards

There are many different ways a card can be cared for and stored. As kids, we used to stick our favorite Pokémon cards in a three-ring binder sleeve and call it a day. Today, card collectors are relying on much more careful methods to protect their collection’s value.
At the very least, storing your cards in a plastic penny sleeve is a must. Cards are made from delicate paper material, and can easily be warped, torn, and faded due to humidity exposure. Penny sleeves can be purchased for relatively cheap, and make a big difference in card protection.

Beyond penny sleeves, it’s also recommended to store your most-valuable Pokémon cards in a top loader. Made of a much more durable plastic, top loaders can be used alongside penny sleeves for the ultimate protection. If you’re looking to sell your cards or plan on mailing them to a grading company, top loaders can help protect your card during transport.

Once you’ve taken the necessary storage steps, ensure you’re protecting your cards from harsh elements. Avoid storing your Pokémon collection in humid and warm areas, so mould doesn’t become an issue. Keeping your cards out of the sunlight is also a must, as no one wants a beautiful Full Art card to become fade.

Pokémon’s 20th-anniversary celebration in 2016 had a great influence on the trading card game space. Collectors and competitive players were treated to nostalgic callbacks to the franchise’s beginning in 1996.

Across several different expansions such as Evolutions, BREAKpoint, and BREAKthrough, card releases made a huge impact that remains to this day. Full Art Ultra Rares such as Mewtwo EX, Pikachu EX, and Gyarados EX still carry tremendous value, while the artwork for Mewtwo EX – Secret Rare is just as stunning as it was during its release in 2016.

Whether you’re thinking about getting started collecting or want to join the competitive world of Pokémon TCG, ensure your cards are well-protected by storing them in penny sleeves or top loaders. Also, avoid keeping your cards outside to avoid mold and other weather-related issues.