If that’s how it was in your house when you received a Pikachu card from your newest Pokemon set of cards, then you know just how much these cards mean to you. Along with the Charizard and Mewtwo, it’s one of the most popular cards with collectors.

Pikachu might be one of the most popular (and cutest) Pokemon characters, but don’t underestimate its power.

It is the face of the Pokemon brand and many card collectors are prepared to pay serious cash to get that highly sought-after 1st gen Pikachu.

Let’s take a look at the best Pikachu cards ever created. 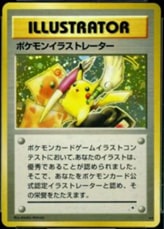 You might have already seen or read about this card – Pikachu Illustrator is a part of the 1998 Promo by the Japanese company called CoroCoro Comic.

The biggest appealing factor behind this card is that there are only 39 copies of this type, which makes it the Holy Grail of all Pokemon cards, not just Pikachu cards.

The card was given as a part of a contest that awarded the winners of a drawing contest, which means that only a few lucky people received this card.

Only a handful are still available and selling, which makes it even more scarce. And one of the main differences between this card and the rest of the Pokemon cards is that it says Illustrator on top instead of Trainer, which is a distinguishing feature.

Despite the high price of the listing, the currently held record for the highest price for this card is $195.000. 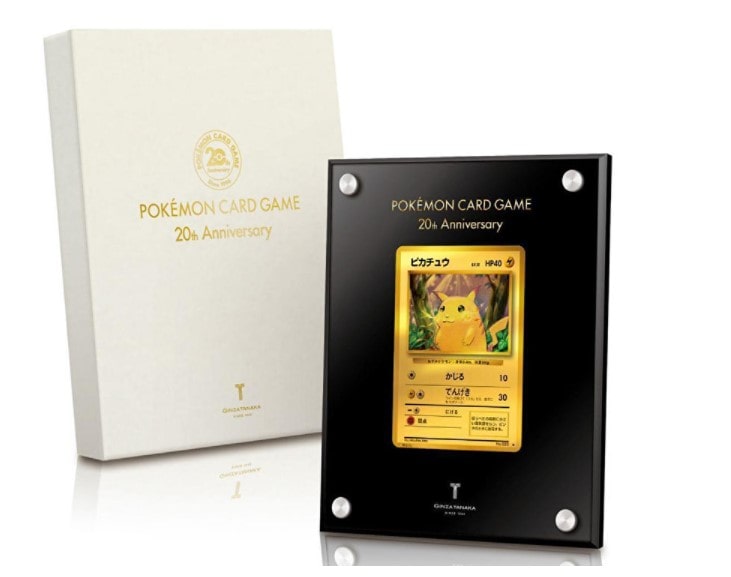 2016 was the 20-year anniversary of Pokemon card games, and to celebrate the occasion, this Pikachu card was made by a Japanese jeweler named Ginza Tanaka.

The main distinguishing feature of this card is that it’s made of pure, 24-karat gold, which makes it a true wonder. So far, the highest price that this card was sold for was around $2100, but that record is to be broken in the future for sure.

One of the main things that keep the price down is the fact that it only came out in 2016, so with many years of pedigree, this card is going to be collecting value and it’s going to cost several times more than that.

It’s certainly a card to keep an eye on in the future as the prices of the card grow. 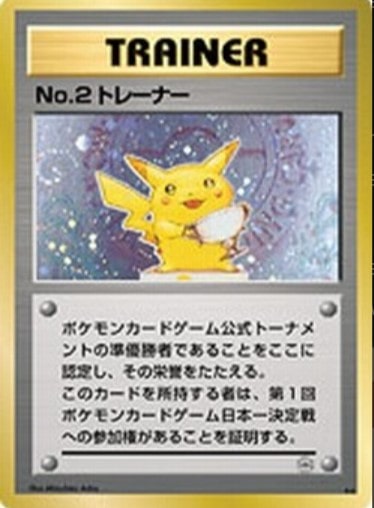 The No.2 Trainer Pikachu card is one of the most highly sought-after Pokemon and Pikachu cards, especially in Japan. The card was originally from 1997 when it comes given to the runner-up of the Lizardon Mega Battle that took place the same year.

For that fact, the card is one of the rarest Pikachu cards ever produced and still highly followed, although only one lucky person owns it at the moment.

This battle tournament from 1997 was only the second official Pokemon tournament held in Japan, which only increases the popularity of this card. 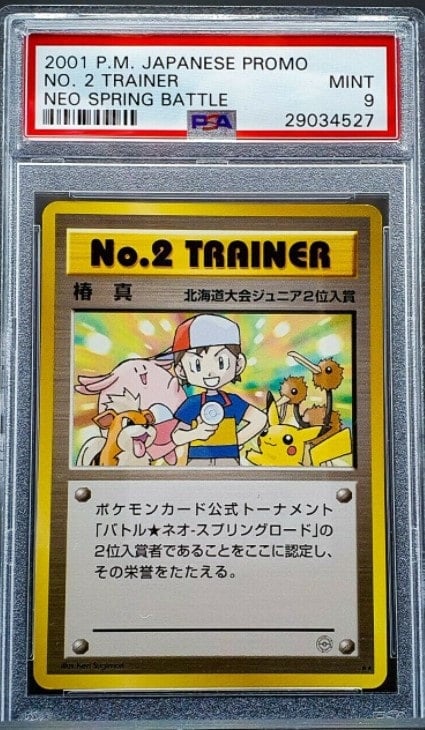 Like the 1997 card, this card reaches extraordinary prices thanks to its rarity, but also because it was a prize card, which means it was only given to the winner of the second spot in that tournament.

The 2001 tournament was still one of the earliest editions of such card tournaments in Japan, and this card celebrates the history of these tournaments.

On the card itself, you can see Pikachu but it’s not the central figure of the card – instead, it is accompanied by some other highly popular members of the Pokemon family.

Finding this card will be tough but if you can find a listing for this card, it is likely going to be for a very high price. 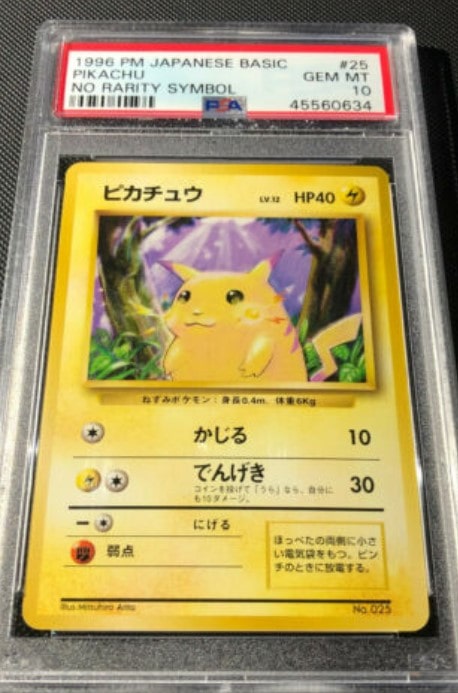 This Japanese Pikachu card from the base set is always going to be among the most popular Pikachu cards.

Firstly, because it’s one of the earliest Pikachu cards ever made, as it comes all the way back from 1996.

Then secondly, this particular card is rated very highly – PSA 10, which only further increases the value of the card.

Finding a card like this in such a condition is always going to be a struggle, so for these reasons, this Pikachu card remains one of the most expensive Pikachu cards. 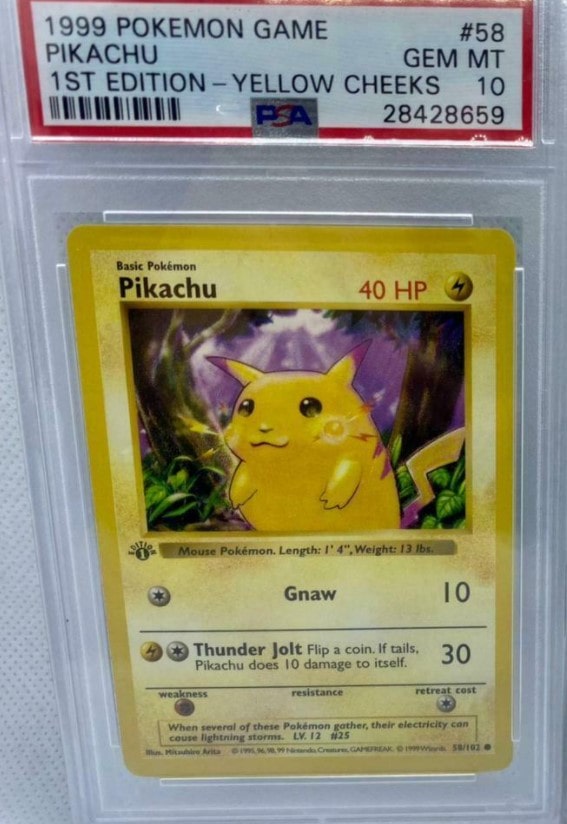 Now, this card and the above card from 1996 are very similar, with a few minor changes to the symbols on the card and other differences that you might be able to spot.

In essence, the image on the card is relatively the same, with yellow cheeks. The main difference is that this card was from the first set released for the American audience in 1999, while the Japanese sets were released way earlier in 1996.

For this reason, this remains to be one of the most highly sought-after Pikachu cards to currently exist. 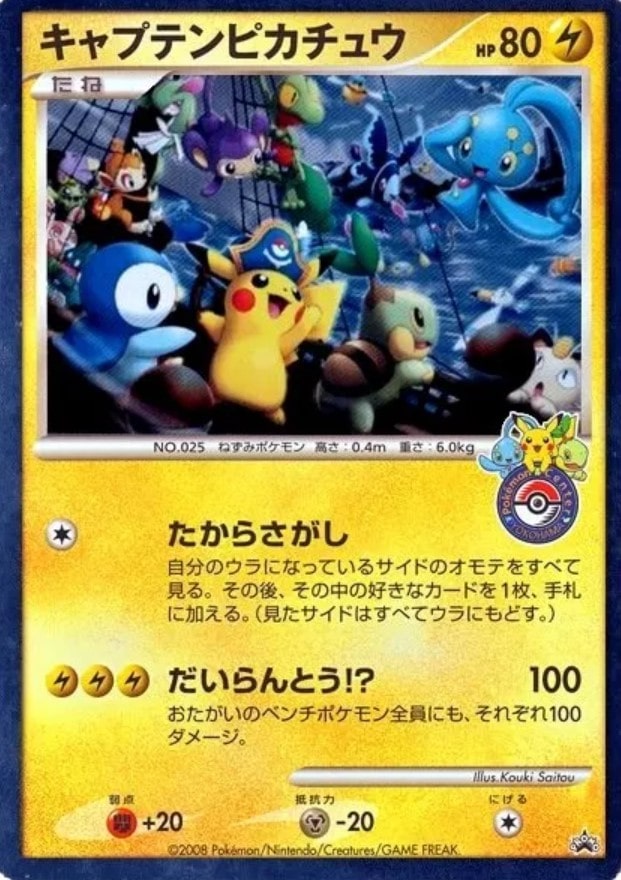 It was a promo card that was produced in 2008 for the Japanese market. But word quickly spread about the power that this card held. I mean, just look at all these crazy stats it has on the right?!

If we translate all of the powers of the card, we get the following: Treasure Hunt (Look at your prize cards and add one to your hand), and Great Fray (Shocks for 100).

In short, this card has so much power that you won’t be able to find it in another Pikachu card.

The problem is, it’s rare as hell.

This card might be a bit too hardcore for casual play, so it’s more of a collector’s piece rather than a real card that you would play a game with. 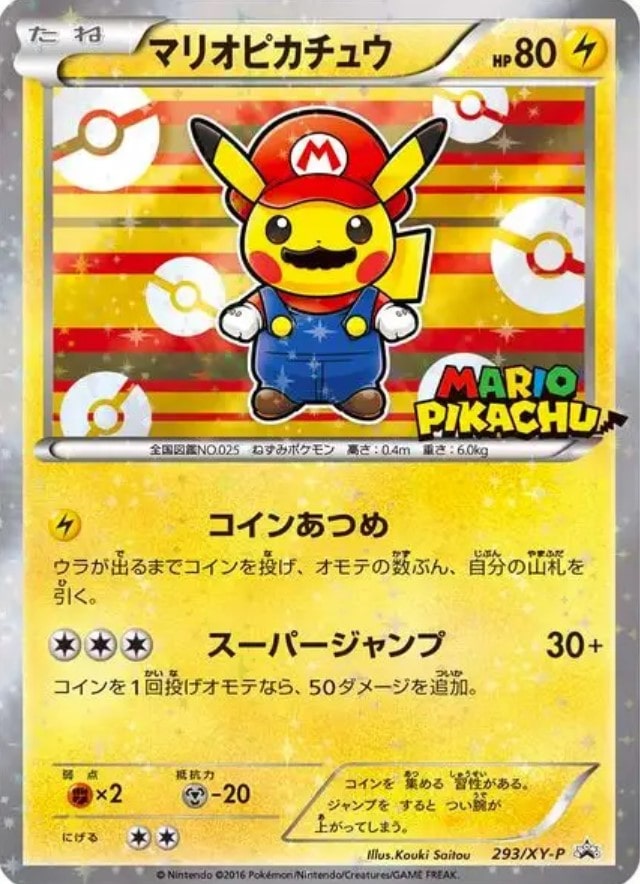 Would you look at this overload of cuteness – Mario Pikachu?

This card combines many people’s two favorite characters into one card, so what’s not to like about this card?

The only problem is, it’s only available overseas, so finding this card in any sort of listing is going to be a long shot.

The card was made in 2016 by Nintendo in what was a smart move by the company. Both brands and cards are highly popular, and they did a great job at combining the two characters and create this beauty of a card.

There are also Mario references on the card, as it has powers like Coin Gather, or Super Jump, which makes this Pokemon card even more intriguing.

9. Pikachu on the Ball 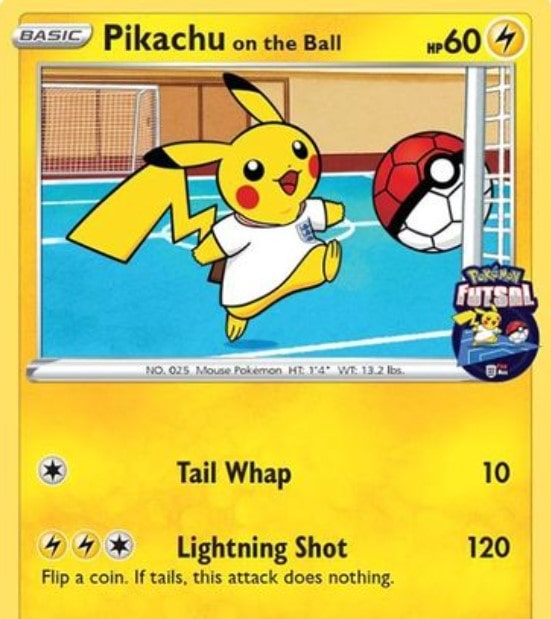 If you want even more variety, then you’re going to be intrigued by this Futsal edition of the Pikachu card.

This card is a part of the English FA’s (Football Association) push to promote Futsal amongst the community, especially among the youngest generation of football players.

This card was handed out mostly to people who were a part of the futsal program, which was active only for a selected period of time. This means that today, this card is going to be extra hard to find out there.

You might find this card listen on a marketplace sometimes, but they’re going to go for relatively big sums of money – most likely, it’s going to be a four-figure sum if not even higher, and there are going to be many interested parties for buying it. 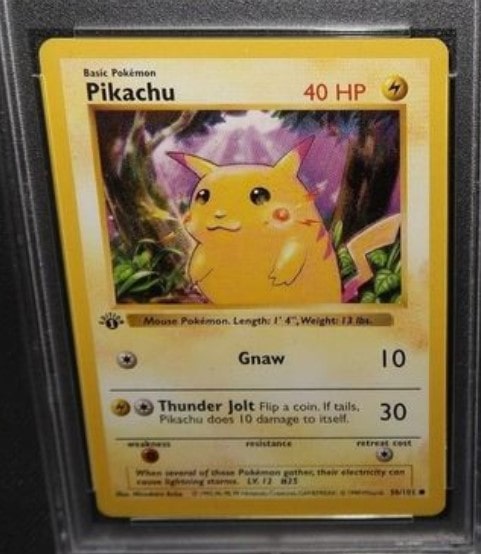 We’ve already featured the first edition Pikachu card from 1999, but that one had yellow cheeks.

This one is a bit different – it has red cheeks.

Not only that, but this card is even harder to find than the yellow cheek variation, which is not surprising considering that yellow cheek cards were more common.

You’ll find that this is one of the most popular cards that were involved in sets that were sold for the popular market. It doesn’t have any special features that we’ve seen with many other cards on this list but is noted for its rarity and high level of popularity.

This card can sell for relatively steep prices, which will vary from a few hundred dollars to up to a thousand dollars and potentially even more than that. 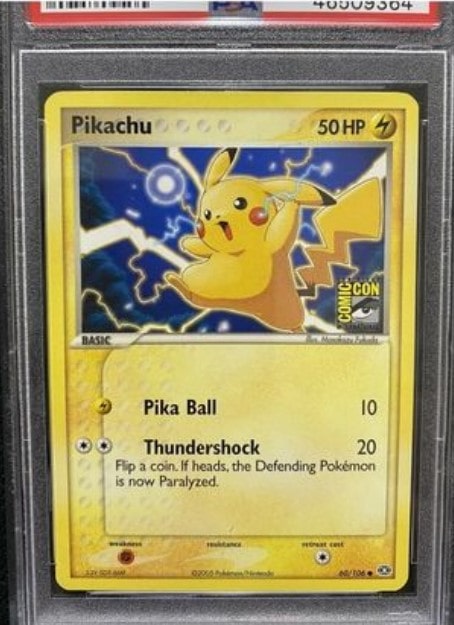 The San Diego Comic-Con is a yearly event that happens in the middle of July. At this event, you’ll find various interesting comic books, both new and old, and one of the more intriguing parts of this event are the Pokemon collectibles and comics.

Of course, Pokemon cards play a big role in this event, too. Sometimes, some cards are created specifically for the event, and this is where the 2005 Pikachu card comes into play.

This Pikachu card was a one-off card that was created with the purpose of entertaining Pokemon fans at the event.

Only a few lucky Pokemon fans were able to get their hands on this card, and they can consider themselves lucky to own one of these nowadays. The prices for this card can be quite steep, as they might reach the price of several thousand dollars, especially in the better conditions and if they’re graded, potentially even more. 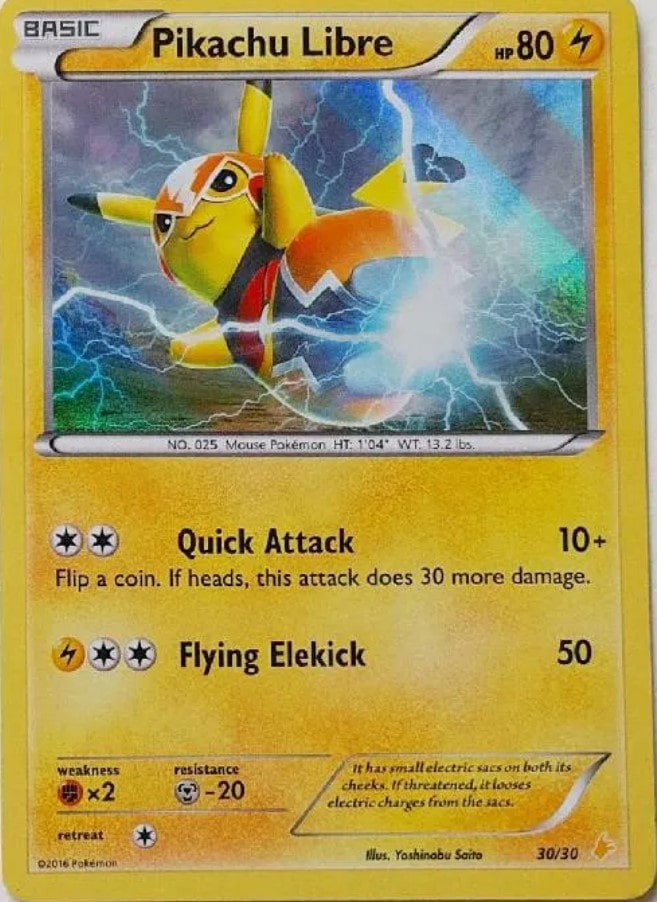 Pikachu Libre is yet another card that stands out for its whacky design and slightly different-than-usual look.

This card was a part of the Pokken Tournament world of Wii U game that was created for the purpose of using Pokemon cards for competing against other players and owners of Pokemon cards.

The main highlight of this card is its difference in design as compared to the vast majority of other Pikachu cards. It has two unique attacks that were never seen before, including Quick Attack and Flying Elekick, which are unique for this card.

Because of these unique features, this Pikachu card remains one of the most interesting Pikachu cards currently out there, although it can be quite expensive because of its rarity as well. 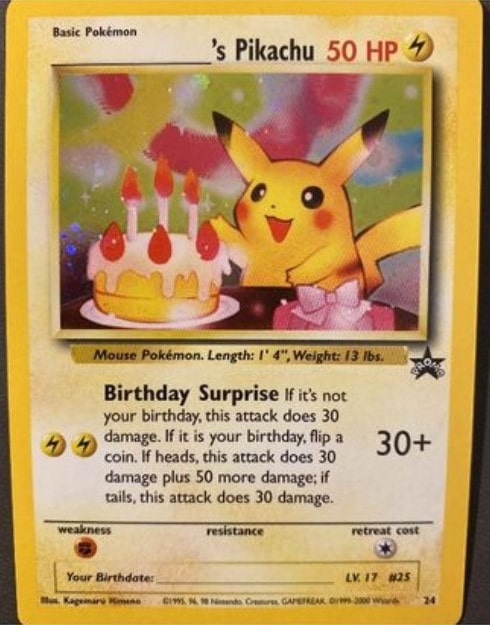 This Pikachu card was specifically made to be presented to someone who has a birthday as a birthday gift. There’s also a level of customizability to the card, as you’re able to type in the person’s name on the card to make it their card.

Birthday Pikachu is one of the most powerful Pikachu cards out there, as you get 50 additional attack points, which is too high for a casual Pokemon game.

That’s why these cards were banned from casual play, but they remain to be one of the most popular Pikachu cards thanks to their customizable nature and their popularity as a birthday gift.

However, you also need to know that this can be an expensive birthday gift. The card might cost several thousand dollars, especially considering that it might not be produced in some regions any longer.

Pikachu is one of the most popular Pokemon characters, and that is reflected in the relatively high prices of some Pikachu cards.

Some of these cards are going to be rarer than others, but there’s one underlying theme with all cards – they’re all popular because of the character on the card that we’ve grown to love over the many years of its existence.