Along with the Pikachu, Charizard cards are probably the rarest and popular with collectors.

I still know how excited I was when I pulled a Charizard.

Whatever your goals are, we’ve got you covered. These are the best Charizard Pokemon cards you can get – we’ve arranged them in a descending order in terms of their value. 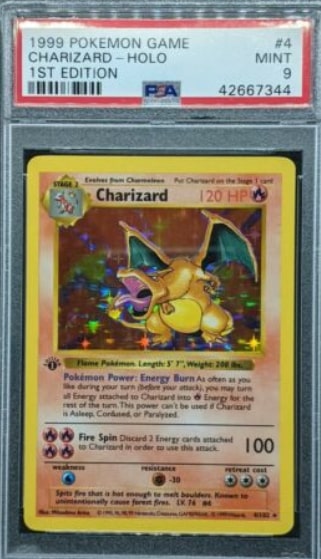 This is BY FAR the most expensive and valuable Charizard card released for the US market. It’s the 1st edition Charizard, baby!

Released back in 1999, the Charizard shadowless 1st edition card remains the Holy Grail among all Pokemon card collectors. They’re willing to pay big bucks to get it, and there are also a lot of these cards being sold on the market, so the prices can vary big-time.

A lot of the value depends on how well the card looks and how it’s graded. If you own at least a PSA 6 or PSA 7, you’re looking at a few thousand dollars. But with higher grades, the prices jump up dramatically. They can be anywhere between a few dozen thousand bucks and all the way up to $100.000 mark and perhaps even more!

As we’ve already mentioned, Charizard is perhaps the most popular figure in the Pokemon world, as it was one of the original Pokemon characters. It earned a reputation for being one of the most powerful cards you could get, and this card comes from the very first English set to ever be printed.

The great thing here is that there are more than 2000 of these cards graded, so you’re likely to find many of these are selling on different marketplaces. However, only about 120 of these were graded PSA 10, which means that buying one right now would mean paying the premium price.

Invest in it if you can! If you own one, it’s worth getting it graded so you can put a price tag on it, and then you’ll probably not have many problems selling it.

Shadowless cards are still highly sought after, since they were printed right after the 1st edition cards as soon as they were sold out. This was also a part of a Limited set that only had a few weeks of printing before the Unlimited cards were released.

This all means that the Shadowless 1999 Charizard card is the second most popular card of Charizard, right behind the first edition. Obviously, there’s no 1st edition stamp right below the image, which is reserved only for the first few cards printed from the 1st edition. However, these shadowless cards are still rare.

Obviously, there are no shadows on the card, which is still desirable among Pokemon card collectors and it screams rarity. To the average consumer, this card might not seem that much different from the rest of the cards. But for experienced Pokemon collectors, the differences between shadowed and shadowless cards are like night and day.

The shadowless card of Charizard from 1999 is still one of the most expensive Pokemon cards you’ll find out there. The prices, again, will depend on the quality of the card and how it’s graded.

A PSA 10 will be worth well into six figures, while lower graded cards usually go for slightly less. But the prices will almost always remain in thousands of dollars, not hundreds – unless the card is deteriorated in quality.

Shadowless Charizard cards had a limited print run, so they’re rarer than the unlimited cards printed out later. If you own one of these, you’re in luck. According to PSA, they’ve only graded 54 GEM MT cards like this, but there are hundreds of PSA 9s and lower.

You’ll also find an abundance of lower graded cards, such as PSA 1 and up to PSA 4. These don’t sell for as much as higher graded cards, but it might be worth checking them out if you’re tight on your budget and you really want this Charizard card. 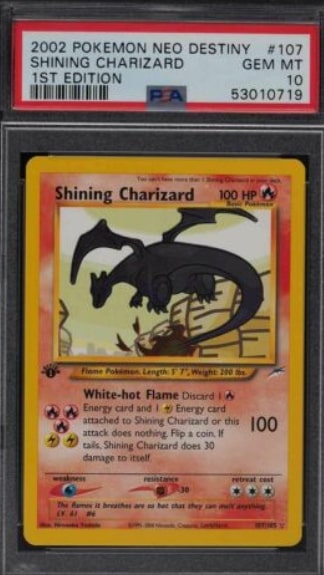 Next to 1st edition and shadowless cards, shining Pokemon cards have always had a fame for being the desirable cards that collectors have always wanted. Back in 2002, this was one of the best cards to own, especially because it was a shining Charizard.

Today, this card is right behind the 1st edition and shadowless cards in terms of value. The main appealing factor with this card is the shining Pokemon, which makes Charizard really stand out on this card and shine. Again, this card is a must-have if you’re a serious Pokemon card collector.

Another appealing factor that only increases the price of the card is the “1st edition” stamp right below the image.

If you own this card, you might be wondering how much it’s worth. You’re in luck, because this card is one of the most valuable Pokemon cards altogether.

The prices will vary and will largely depend on the quality of your card, but you can expect it to get anywhere between a few thousand dollars and all the way up to a few dozen thousand. For instance, a PSA 10 could be worth all the way up to $20.000 and maybe more if the market’s right.

This card is significantly rarer than the first two we’ve mentioned on this list. According to PSA, they have graded 440 of these cards. A lot of them were PSA 10 – almost a third of them, while there’s also a lot of PSA 1-graded cards. 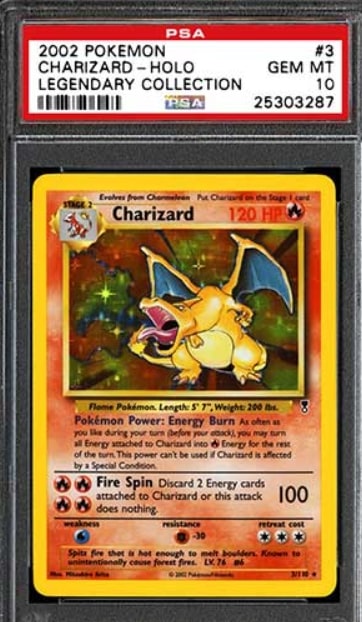 If you take a closer look at this card, you’ll see that it resembles the cards from 1999 very closely. So, where’s the catch?

First, this card is from the legendary collection from 2002, so it has the small medal in the right corner right below the image. This little medallion increases the price significantly, or else it would just be a regular shadowed Charizard card.

A lot of these cards are found in lower grades than PSA 10, so their prices will be significantly lower than the shadowless options. It’s still a very popular card that many collectors want to have, so you will probably not have many problems selling it if you own one.

There’s one more card to mention here, and it’s the 2002 Legendary Collection Charizard Reverse Holo card. People often mistake it with the base card, but in reality, it’s a bit less valuable than the base card (a few thousand dollars). Here’s how it looks: 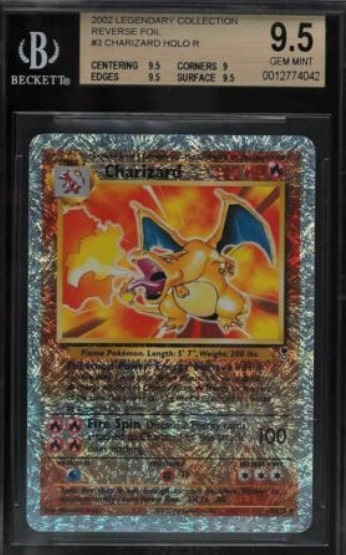 The main determining factor for the value of this card is – as expected – its grade. If this card is graded a GEM MT – which is a rarity, by the way – you can expect it to fetch a few thousand dollars.

Lower graded cards go for less. You might even be able to get one for yourself for a decent price, considering that you don’t want to have the highest graded cards unconditionally.

Not as many as you might expect. The main selling “feature” of this card is its rarity. PSA says they have only graded 12 PSA 10s of this type, so you’ll probably struggle to find a GEM MT if you’re a perfectionist.

There are many more PSA 9 and 8s though if you’re not that picky. These will not cost as much as the PSA 10, but it can still command a relatively high price of a few thousand bucks. 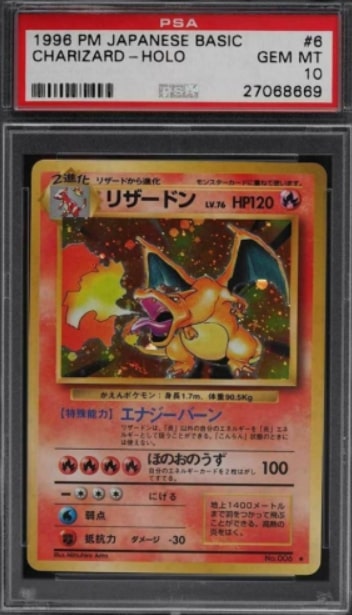 When we’re on the subject of the rarest Charizard cards, we simply can’t ignore the earliest Japanese cards from 1996. This Charizard Pokemon card is the earliest printed card out of all the cards, although it’s only available in Japanese.

For some, that might be a turn off, but for others, it’s exactly what makes this card so special. There’s a notable lack of the rarity symbol on this card, which means it was printed even earlier than most mainstream cards from 1996 on the Japanese market.

What’s the difference between this one and the 1999 Charizard card from 1st edition? They’re quite similar, although the only major difference here is the energy symbols, which are shown horizontally here rather than organized in a box like on the 1999 card – along with the language, of course.

Since this card comes from 1996, it’s one of the earliest available cards (not the earliest known to date, though). This means that the value of this card can go through the roof, especially since there are not many of them. 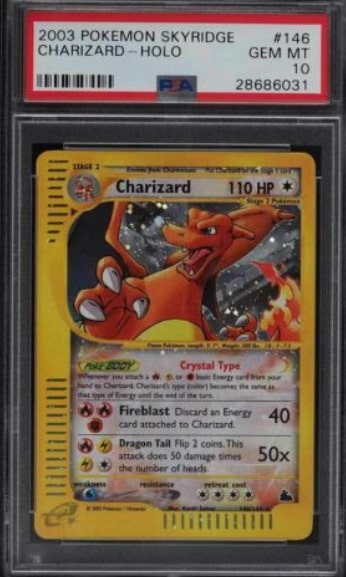 The 2003 Skyridge Charizard card is famed for its artwork. On this card, we can see Charizard much closer, and we also see his claws, which attracted the attention of many collectors.

One thing is clear with these cards: they’re rare as hell. There were less than 400 of these cards graded by PSA, so you’ll also find many ungraded cards. If you do go for an ungraded card, watch out for the centering.

This card remains to be one of the most popular Charizard cards, which increases its value. It’s also rare, so it will fluctuate anywhere between a few hundred dollars to at least $10.000 for the best graded cards. Again, it massively depends on how well the card is graded.

There are less than 400 of these graded by PSA, so it’s fair to say they’re unique and rare. But the interesting thing here is that there are a lot of GEM MT graded cards of this type, so you might have an easier time getting a nice card. 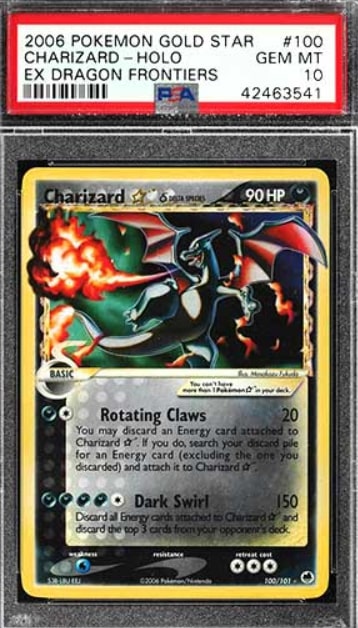 When you look at this card, the black design pops out immediately. Also, the artwork of the card is not limited to the character box. If you want something different and a unique design for a Charizard card, then you might have to look at this one and get it.

In terms of value, it’s still behind the cards we’ve mentioned above, but it’s still quite expensive. It can cost several thousand dollars, although its value will struggle to exceed the $10.000 mark, even in the best graded conditions.

According to PSA, there have been 845 cards of this type graded, although only a very small portion of these were given the GEM MT mark. This means it’s tough to get it in the best grades, but it’s still a great investment if you’re buying, and a great card to sell. 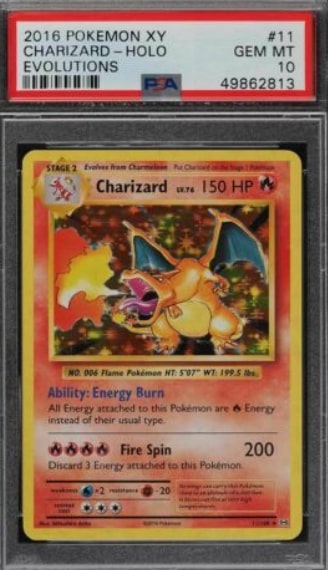 This card is hugely popular, especially because the 2016 Pokemon set sees a return to basics for Pokemon cards. What is more, if you’re able to get one of these from the Staff Prerelease version, you’re looking at a relatively high price of a few thousand dollars. This is one of the more popular cards of Charizard from recent years.

The value of this card depends on its condition, and it will span anywhere from a few hundred bucks for the lower graded cards to a few thousand dollars for higher graded cards.

Only 317 of the Staff Prerelease cards have been submitted to PSA, while there are slightly more of these “normal” cards that weren’t given to the staff. 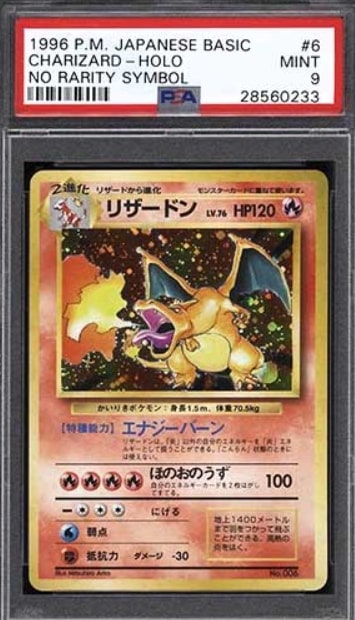 Now, this card has always been a bit of an enigma. We’ve included it because it’s unlikely you’ll ever lay your hands on one of these. If you own one, you’re in luck – it’s by far the most expensive Pokemon card of Charizard.

The trouble is that these cards were from the Japanese set from 1996, only that they were printed out in the first few weeks of printing, so they had no rarity symbol. Don’t get your hopes up of ever finding this one, and even if you find one, you’re going to have to splash your cash.

No rarity cards were only printed for a week or two, until they started including the no rarity symbol. Initially, it was believed that there was only one instance of this card, but more have recently been discovered.