In this article, we’re going to look at some of the best Erling Haaland rookie cards and stickers on the market. 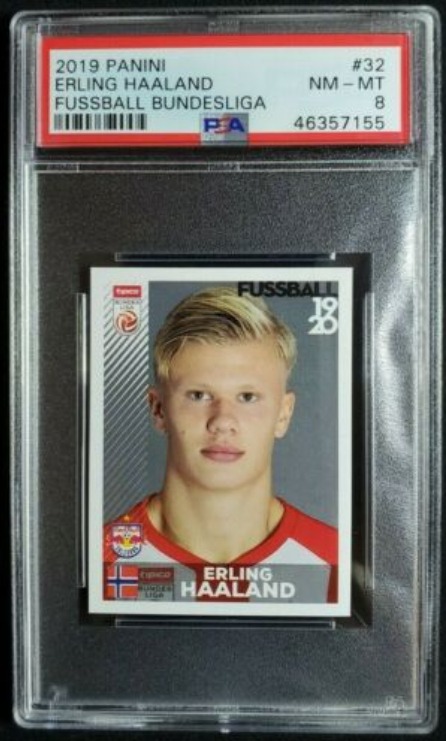 As far as looks go, it’s a pretty basic sticker layout. But the beauty is in it’s simplicity, and the fact it’s Haaland’s first product.

This sticker could be the product in the sport over the next ten years.

It’s also important to know that Panini actually re-printed this sticker. The only real difference between the two is the white strip on the right-hand side. The re-print has a darker, thicker white strip, whereas the first print is more transparent. 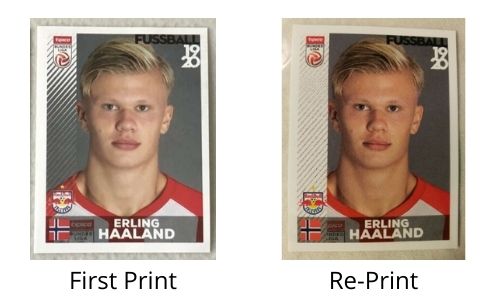 The first print is more expensive, and the re-prints are still a good sticker (they’re still Panini). Just make sure you do your homework when comparing prices. Don’t assume you’re getting an absolute bargain if you’re buying a re-print.

Panini said that they only re-printed 500 of the stickers, but I don’t really believe that. Depending on the price, the Panini re-print is still a desirable sticker.

Find it on eBay 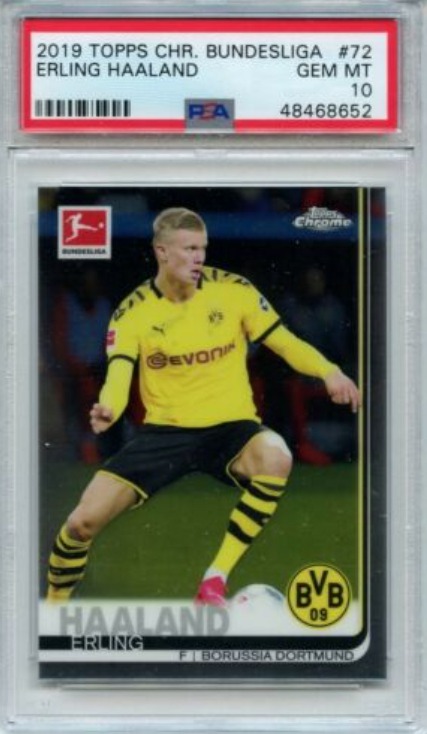 Haaland moved from RB Salzburg to Dortmund in January 2020 and was an instant hit – banging in goals left, right and centre.

Obviously not as high-ticket as the autographed refractors and regular refractors covered below, the base card is still a collector item from Haaland’s first season in a top five league (sorry, Austria and Norway). 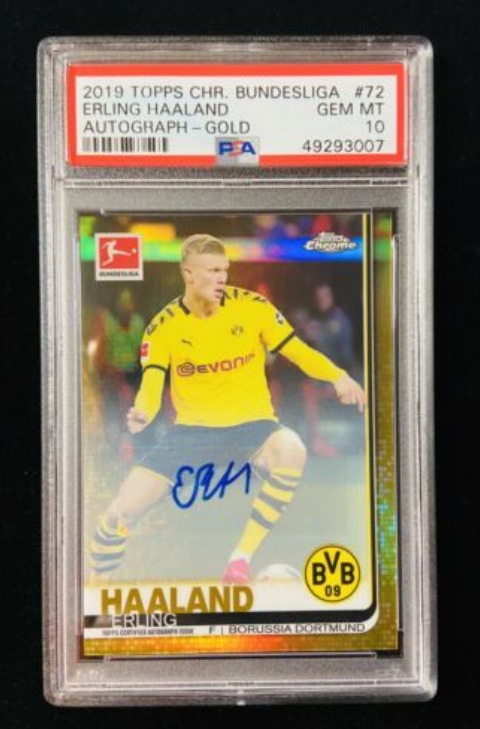 If you’re looking for a high-ticket Haaland rookie card, this set is his the pick from his rookie season at Dortmund in Germany.

The Topps auto card refractors are a thing of absolute beauty.

If you’ve read our article on cards vs stickers you’d probably know that cards are a friendlier product for the wide market. Stickers are only really a “thing” in soccer, so many collectors only work with cards because that’s what they’re used to.

There are a bunch of different refractors on the market with different print numbers. The most scarce cards can be super expensive, but are a great investment in the player going forward. 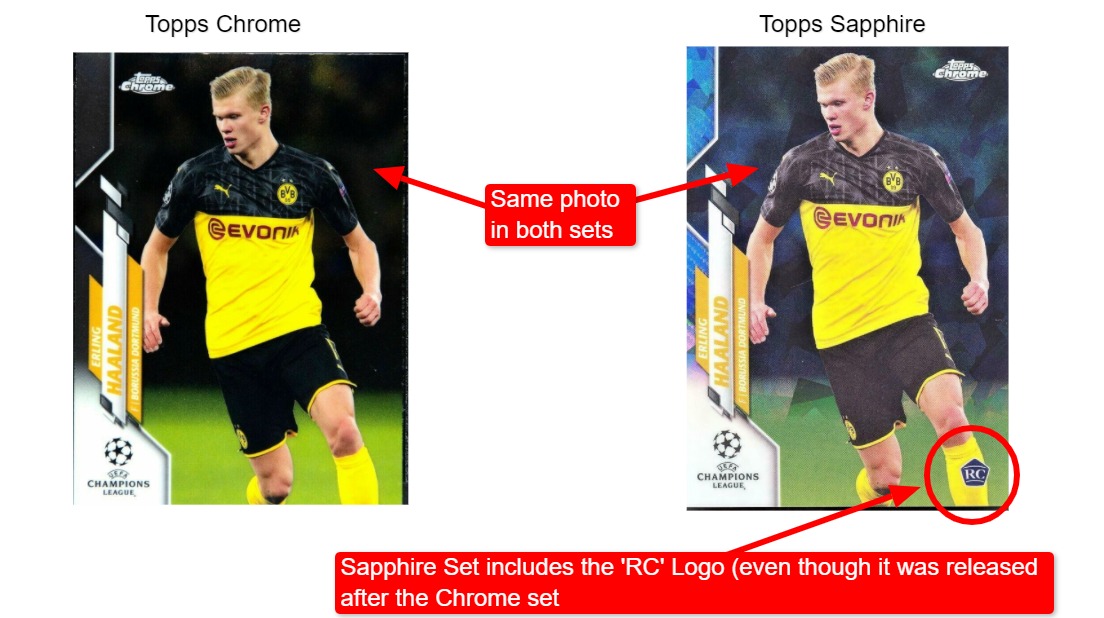 There are a few key differences though: 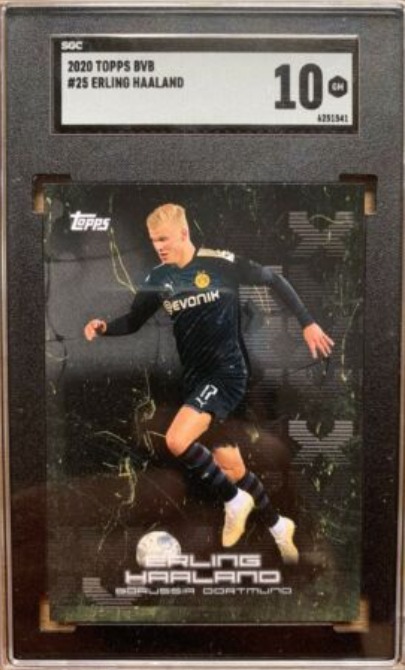 Topps also curated a mini-set with only Dortmund players and stars of yesteryear.

The set has Haaland and Sancho as a few of the lead stars of the card set.

This set has a limited checklist, and the Haaland card is a nice one to add to a collection. There are also some auto parallels that are chase cards in the packs.

While not an authentic rookie card, Haaland did feature in Topps’ Living Set during his debut season in Germany.

The Living Set brings Champions League stars and legends to select collectors in a set of beautiful cards.

Honestly, the Living Set cards are some of my favorite.

The art-based brand is exclusive to Topps online. With that, there’s no set checklist, as new cards are constantly added and sold for a short window. 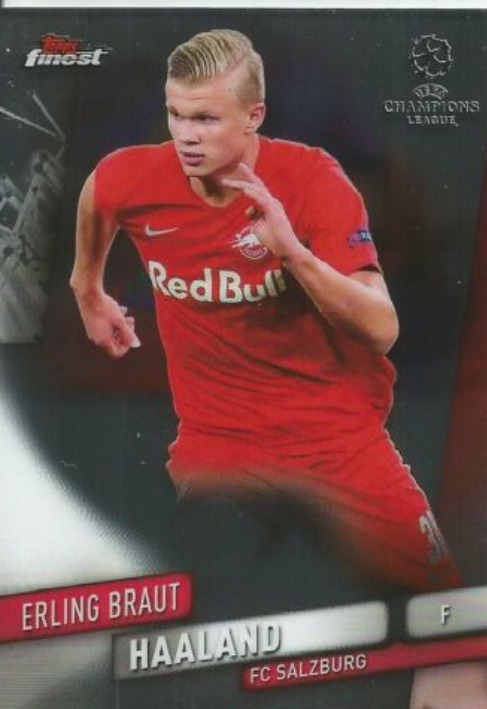 Topps having the Champions League means that they can get in early on some cards before they’re available in their domestic leagues.

Or, they can produce cards for young guns in leagues that may not have headline cards out. Haaland is an example of this.

This card shows the striker playing for his Austrian side before joining Dortmund in 2020.

At the time of writing, this card is definitely an affordable option compared to others mentioned, but I don’t know how long that’ll last as it shows Haaland in his debut Champions League. 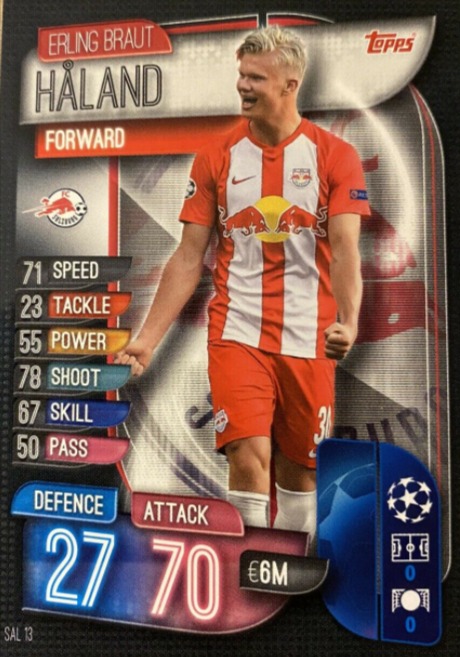 There’s a lot of debate around Topps Match Attax and Panini Adrenalyn cards – some say they’re too childish – and the fact that they’re based on a card game makes them pretty much worthless.

While the cards may not get the thousands of dollars that the high end stuff does, a lot of the time, there’s a rookie card in Match Attax or Adrenalyn before other sets – sometimes years earlier. This Haaland Match Attax card is his first card (the Fussball sticker is older), and one of the only products that shows Haaland in his RB kit.

Because Erling Haaland is a top player, you get a lot of fakes trying to scam collectors.

A common scam is trying to manufacture a card from Haaland’s time in Norway. There were no cards created of Erling Haaland when he played in Norway – any you see will be a custom card, and a fake.

Here’s an example of a Match Attax card showing Erling Haaland in his Molde uniform. 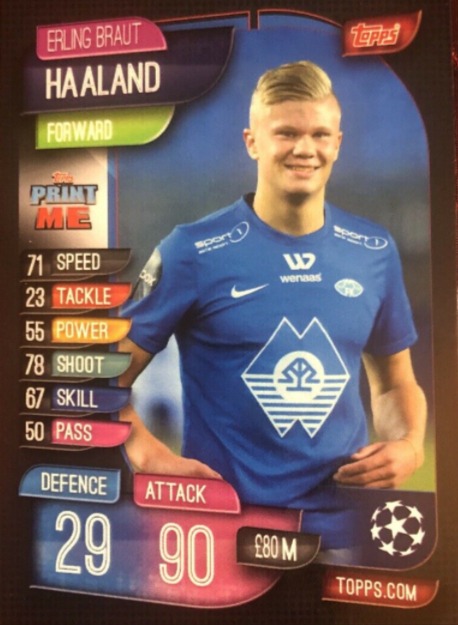 If you held it in your hand it would feel like a legit Topps card too. Partially because it is. Do you see the ‘Print Me’ logo on the card? Well, that logo means that this card was created on the Topps website as a custom. 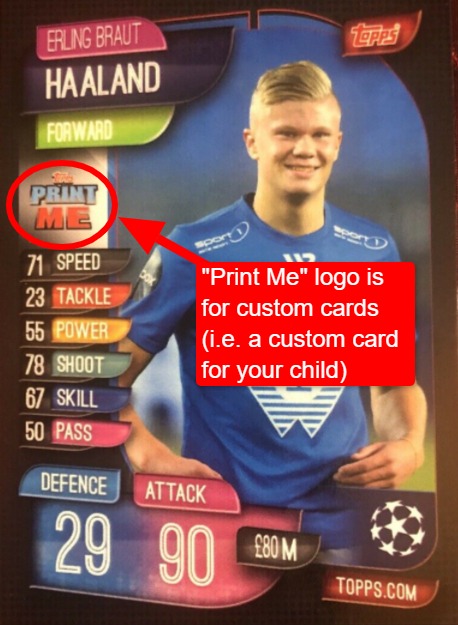 The Print Me cards are designed to be a gift – for example, a Little League coach would use player images and logos to create a set for the junior team.

This card was created using that system – and to be honest, I’m surprised it got approved to be printed.

This is just one example of a fake Erling Haaland rookie card, but there’s plenty of others.

Haaland is possibly the best prospect in world soccer at the time of writing. With that there is a bit of a double-edged sword.

First off, his cards will be more expensive than many other prospects (as many see his as a can’t miss). But with that, there’s a lot of risk. A bad move, or a few years on injury and that’ll impact his prices for sure.

On the other hand, if he lives up to his potential (or even half of it), his price will rise over time too.

Norway aren’t a traditional powerhouse, however, I’d definitely think he’ll play in at least one World Cup in his future – especially seeing it looks as though FIFA are still looking to expand the World Cup to have more teams.

I love Haaland as a prospect, and think he could be absolutely anything. But investing big into young players who haven’t proven themselves over a long period of time is always a risk.