If you’re new to the soccer side of the hobby, you’ve probably noticed there are cards and stickers for all of the key players.

As a newbie, it’s pretty confusing.

In this article, we’re going to look at soccer cards vs soccer stickers and tell you eight main differences between the two.

1. Soccer Stickers Have Been Around Longer

Soccer stickers are a mainstay of the sport and almost every kid who was a fan of the sport had at least one sticker book.

Panini started soccer stickers in the 1960s and they’re still making stickers today for all the major leagues and international cups around the world.

So, if you’re looking for products for older players, you’ll likely only find stickers. Sure some cards have been created for a long time, but they’ve traditionally played second fiddle to the stickers.

2. A Player’s Sticker is Their “True Rookie” Product

As we mentioned above, a lot of die hard soccer collectors will see a players’ rookie year sticker as their ‘true rookie’.

For example, if you look at Cristiano Ronaldo‘s rookie products at Sporting Lisbon, most collectors will see the sticker as his “true rookie”. 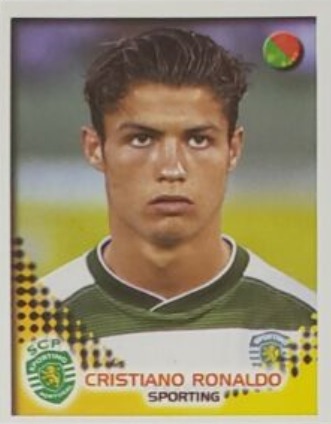 However, there was also a card released by Panini that year.  This card from the Mega Craques set sells for more money than the sticker, but the sticker has a special place in the heart of collectors.

Not to mention that a lot of smaller leagues didn’t have a card set at all – so there may have only been stickers produced in the rookie year. This varies a lot from country to country too.

For example, I’d say that the French league is bigger than the Portuguese league. However, if you want a true Mbappe rookie from his days at Monaco, there’s only a sticker released (unless if you turn to small manufacturers that don’t really have too much wide-spread collection value at this stage). Some goes for players like Kevin De Bruyne who started in Belgium.

3. Stickers Are Harder to Grade

Generally, stickers are a much harder product to get graded than cards. Or at least to get a good grade.

So, it’s common to see a lot of raw stickers compared to cards.

For starters, stickers are produced quickly, which means that the centering is usually off and there can be some miss-printing on the front. So, that means it’s usually hard to find a good grade on a sticker.

Also, the whole concept of grading cards and stickers is only somewhat new in Europe compared to the US. It’s highly unlikely that cards and stickers were graded the year of release. So these stickers usually have some wear and tear on them by the time grading comes around.

On the plus side for sellers though, this is a common issue with all stickers – so the value of slabbed stickers still holds up even with what you might consider a poor rating in other sports. I’ve seen some pretty insane prices on rookie stickers graded a PSA 5 or 6.

4. Stickers are Cheaper (For Now)

We kinda touched on it earlier, but cards are a lot more expensive than stickers are.

For example, Messi’s first Prizm World Cup card from the 2014 World Cup sell for thousands of dollars these at the time of writing. A lot more than his 2014 sticker sells for… 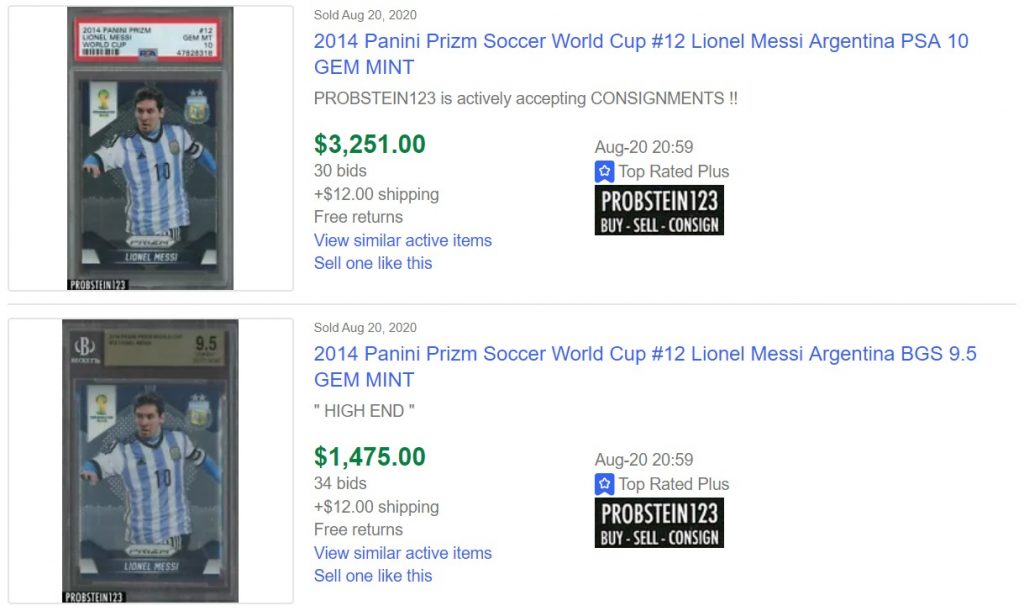 However, the 2014 World Cup wasn’t Messi’s debut World Cup… it wasn’t even his second World Cup.

Now, there’s a bit of a Prizm price-increase involved there, but even if you compare stickers and cards for Messi’s first World Cup – the card is still a lot more expensive than the stickers.

For me, I think the price difference comes down to a few things. However, the main reason is that investors are more familiar with cards. More on that later though.

5. Stickers Are Usually Local To The Country The League is Based In

Leagues like the NBA and NFL are worldwide. That means that I, an Australian, can head down to my local card store and buy packets of cards.

However, this isn’t really the case with soccer cards. Pretty much every league’s stickers were only released in the country the league is based. So the French league stickers are mainly available in France, the Italian league stickers are sold in Italy, and so on…

All in all, this means that international stickers can be hard to come across.

6. Cards are Generally a Better Product

When it comes to the quality of the product – it’s pretty hard to argue against cards being the higher-quality product.

A lot of this comes from stickers traditionally being inexpensive. Still, it’s pretty easy to argue that soccer cards are a higher end product than stickers. Especially if your background is card collecting.

7. Cards are More Familiar to New Investors and Collectors

We’ve danced around this point a few times, but we’ll go through it properly here. Soccer cards are a lot more familiar to new investors, especially if they don’t know about soccer.

Think about it – if you don’t know anything about soccer but want to get involved in the hobby, there’s a lot to know:

Now, imagine having to learn all that and have to lean what stickers are worth investing in…

So, it’s no wonder that brands familiar with American buyers quickly raise in price. For example, Prizm’s first World Cup cards we mentioned earlier went absolutely bonkers on re-sale in mid 2020 when soccer cards started to really take off. A huge reason for that was new investors stuck to a brand they know.

It’s hard to predict if this will continue long-term or not – but I wouldn’t be surprised to see newbies heading towards makes like Prizm.

Another thing that’s difficult with soccer stickers is the lack of knowledge on print runs. This can make it pretty hard to get a full grasp on how many copies of each sticker there are.

Same thing goes with numbered prints on special parallels. You know that if you buy a card that’s numbered to 250, that there’s only 250 of those cards in existence. You don’t have that with stickers. This makes pricing and getting the value of your sticker a little more difficult.

It’s important to know the main differences between cards and stickers when you start investing in soccer.

There’s no right or wrong way to go about collecting – both cards and stickers have their place in the hobby. If you want players’ true rookies, you’ll have to track down stickers. However, more and more leading card brands are coming out with soccer gear now, so there’s easy starting points for people who want to start in the hobby.