Becks was one of my favorite players growing up.

My theory on David Beckham is that he was too good looking. He reminds me of Brad Pitt in this way.

Brad Pitt is a spectacular actor. Like, one of the best of his generation. He could have been the best character actor ever. However, he looks….. well, he looks like Brad Pitt – which means he was typecast into these moviestar roles that don’t let him show off his talent.

Only as Pitt got older was he in more films that show off his range.

That’s Becks to me. He was so good looking that he was made to be the face (and abs, and arms, and butt) of every team he was on – which overshadowed how great he was. 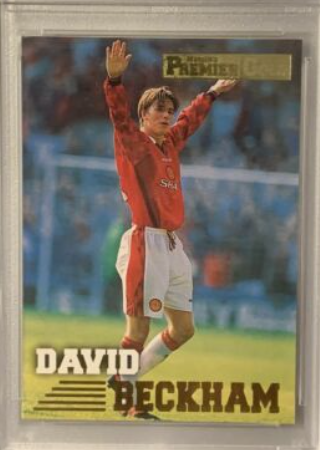 This is most likely the earliest David Beckham card you’ll find today. It’s the first official Merlin pack where David Beckham was included, although he made his debut already in the 1994/95 season in the Premier League.

It was in the 1995/96 season, however, that he established himself as a regular in the first team.

He was a part of a talented bunch from MU Academy, as a part of the famous ‘92 generation that included the likes of Giggs, Neville, Butt, and Scholes. This generation led Manchester United and Sir Alex Ferguson to many titles, but Beckham most likely became the most famous of all.

The 1996 Merlin card is a rare card. It’s also the most valuable Beckham card out there, not only because it’s his first official card but also because of what he went on to achieve.

On the front of his card, you’ll find a minimalist design with a full photo of Beckham and his name on it. On the back, you’ll see a short description, some of his stats, and a chart of his skills. This card is a must-have if you’re a Beckham fan or if you are looking for some epic rookie cards.

As the years pass by, Beckham will undoubtedly be seen as one of Premier League’s greats. The memory of Beckham right now is still fresh, but in 10 or 20 years’ time, this card will most likely increase in value. 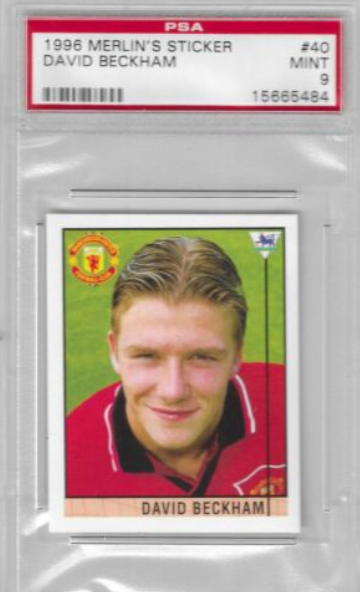 If you’re more of a sticker collector, then you can go for the 1996 Merlin’s sticker of David Beckham, too.

This is also the first officially recognized sticker of David Beckham. However, these are extremely rare – especially in top condition. So if you find one in a good condition, you might be able to turn in a nice little profit – or at least add an amazing sticker to your collection.

What makes it so special? Well, first of all, it’s David Beckham in his first official season at Man Utd. This alone adds a great deal of value. This baby face developed into one of the world’s biggest superstars and a brand of his own later on.

Secondly, it’s the season when Manchester United won the first Premier League title with Beckham in the team. And of course, as I mentioned, the sticker is quite rare in top condition, too. 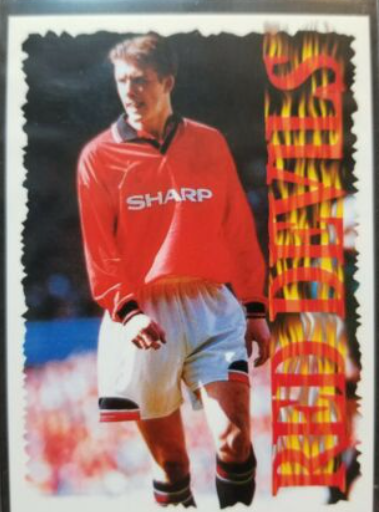 The Raven card set is one of the rarest card sets you’ll find on this list. There were only 500 copies of this card printed out, and the entire set featured 14 Premier League teams. Obviously, this fact alone increases the value of this card from the get-go.

It’s not quite clear when this card was first distributed. But PSA says that it’s from 1995, although there are some arguments that it came out later. Most likely, it comes from the 1995/96 season, which is also the first season when Beckham featured in the first team.

Because of its rarity, the card is worth several thousand dollars. And you won’t find that many instances of the card on the internet – for example, on eBay, I was only able to find 2-3 of these cards.

If it’s true that this card is from 1995, then it’s even earlier than the Merlin card. Even though the Merlin card is the only official rookie card of Beckham, the Raven card has more value because it’s rare. 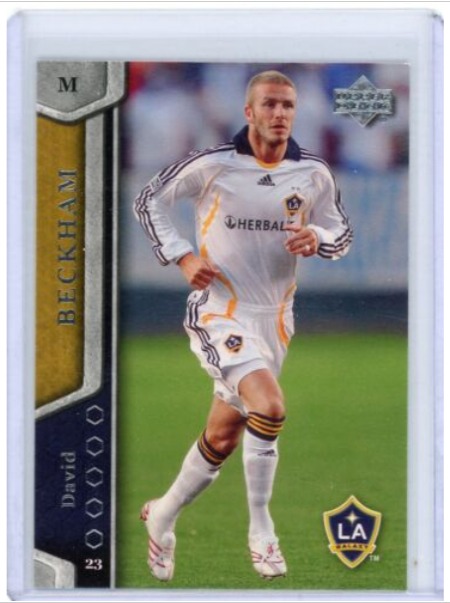 2007 was the year when David Beckham transferred from Real Madrid to LA Galaxy. As you might imagine, the move made for a massive publicity stunt, as it was one of the biggest ever transfers to the MLS.

By then, Beckham was 32 so arguably, there was still some fuel left in his legs. However, by this time, he was already viewed as more than a footballer – he was a brand of its own.

He spent 5 years in the USA, although this card from 2007 is the most famous and also the most valuable card of Beckham playing for LA Galaxy. It’s sort of a rookie card as it’s from his debut season, too.

As you may see, the card is quite different from his early Man Utd cards. It features some nice graphics with a full photo of Beckham on the front and a brief description of the player on the back of the card.

That’s it as far as David Beckham rookie cards are concerned, although there are plenty of other Beckham cards that make for nice additions to the collection. 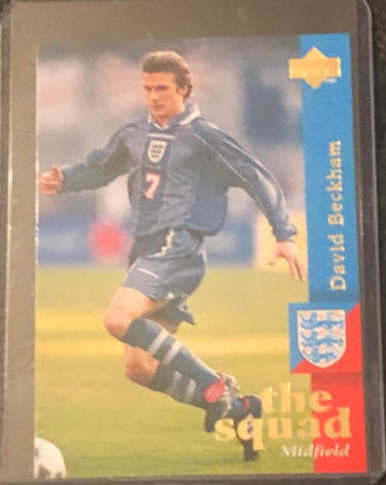 This card’s from Beckham’s first major international tournament with England, the 1998 World Cup in France. 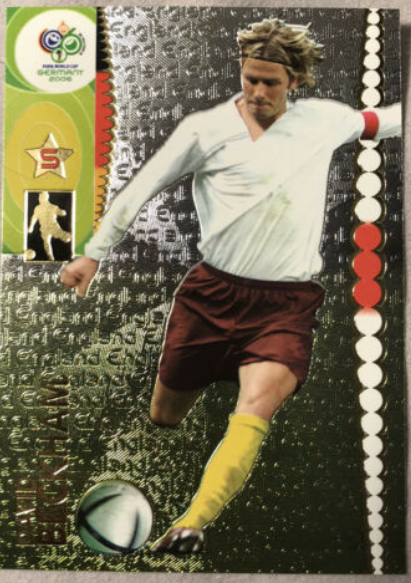 Here’s another valuable and very rare card from the 2006 World Cup in Germany. It has an interesting foil and a Beckham wearing an England shirt, although without the badges.

Born in 1975, David Beckham is considered one of the best midfielders of his generation. His first success came for Manchester United under Alex Ferguson, where he established himself as a creative midfielder with an eye for a pass and a wondrous right foot.

In 2003, he transferred to Real Madrid and in 2007, he left Madrid for Los Angeles. He also played for Paris Saint Germain and Milan at the end of his career.

Many argue that he could have achieved even more as a footballer. As his career and fame developed, he started delving more into modeling and business. He established his own line of clothing which took off quickly, as you might imagine.

But that’s also what makes him a global superstar that he is and was in his playing days. He is a unique case that started this phenomenon of footballers becoming brands, and will be considered as a great well into the future.