Bob Pettit was a dominant power forward in the 1950s and 1960s, and he retired as the NBA’s all-time leading scorer. Bob Pettit played his entire 11-year career with the Milwaukee/St. Louis Hawks from 1954 to 1965, becoming a Rookie of the Year in 1954-55 and leading the Hawks to the NBA championship title in 1958.

A 2-time league MVP, 11-time NBA All-Star and 5-time All-Star MVP, Pettit was the first player in NBA history to average more than 20 points per game in every season of his illustrious career.

Pettit was the first NBA player to overcome the 20,000 points barrier, and is one of four players who was named to all four NBA anniversary teams.

Despite his significance to the game of basketball, Bob Pettit is somewhat underrated in comparison to other greats of his era. There is not a lot of video footage of his playing days, so the fans of today just lack the knowledge and couldn’t see him perform at his best. That reflects on the collectors’ attitude as well, and we can see that Bob Pettit’s cards are not as highly demanded as they could be, or should be, based on his accolades.

Bob Pettit was drafted out of Louisiana State University with the second overall pick by the Milwaukee Hawks in the 1954 Draft. His official rookie card wasn’t released until 1957 though. Topps printed his official RC three years later, and it’s Bob Pettit’s only official rookie card. For Bob Pettit it was a highly demanded card right away, because he was Rookie of the Year after his initial season with the Hawks. Let’s dive into some details of this iconic card.

Part of the 1957-58 Topps basketball set, this Bob Pettit card is his official rookie card. As mentioned above, it was a fairly popular card and represented higher value at that time already. 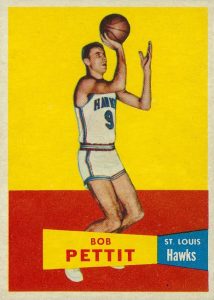 The design is visually appealing, with the card background divided into red bottom and yellow top and Bob Pettit wearing his Hawks jersey is pictured in the middle in a shooting motion, with his name and the team name in the lower part of the card.

It is worth mentioning that the 1957 Topps Bob Pettit RC #24 was the only card in the set that was a quadruple-print, so it might not be as rare as the cards of some other players in the set.

The set itself, the 1957-58 Topps basketball set, was the first basketball release in more than a decade, so it is an important set from a collector’s standpoint. Cards for many players in the set who were drafted before 1957 were issued for the first time, and thus considered rookie cards. You can imagine Bob Pettit was overshadowed for example by Bob Cousy and Bill Russell whose RC’s are also part of this significant set by Topps.

The 1957 Topps Bob Pettit RC is significant, iconic and would be highly-sought after by many budget-minded collectors.

There aren’t many Bob Pettit cards released during his playing career (one is his RC mentioned above and the other two are coming up later in this review). As you’ll see, most of the cards were dropped when he had hung his sneakers already. We’ll review the most notable Bob Pettit sports cards starting with the latest, more affordable ones and finishing with his best non-rookie cards that are considered worth paying attention to. 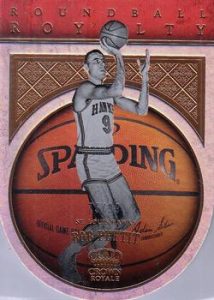 The 2017 Panini Crown Royale Roundball Royalty Bob Pettit #RR-3 is designed around a Spalding basketball with the lower part of the card rounded and the player’s action shot in the middle. Bob Pettit is seen in a shooting motion with one hand on the ball. His image is black and white, while the background is red or green.

Among all the cards in this set, the 2017 Panini Crown Royale Roundball Royalty Julius Erving and Oscar Robertson cards are the most valuable. The Bob Pettit #RR-3 is still a notable piece and deserves attention. 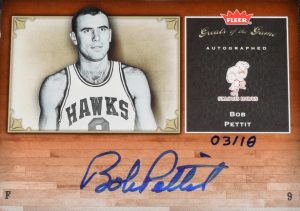 Another card released in the 2000’s for the legendary Bob Pettit is this 2005 Fleer Greats of the Game item. It is officially autographed so it’s definitely worth checking out.

Designed to resemble a hardwood basketball court, the card features Bob Pettit’s black and white image on the left side and the Fleer Greats of the Game box with the St. Louis Hawks logo on the right.

This signed Bob Pettit card is certainly a remarkable collectible of the legendary power forward, and at the same time it is fairly affordable given its caliber and the autograph of the Hall of Famer. 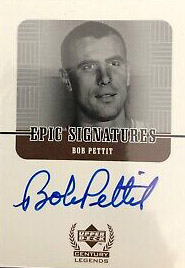 This is an earlier card for Bob Pettit that was officially autographed for the 1998-99 Upper Deck Century Legends campaign called Epic Signatures. The set contained 32 cards of the greatest players in almost a century of the NBA.

Bob Pettit’s autograph in blue ink is seen below the image box and above the Upper Deck Century Legends logo.

This Bob Pettit Upper Deck piece is notable, because it is a beautiful minimalistic card, it is a part of the set with a chosen few, and Bob Pettit’s autograph certainly adds value to it. 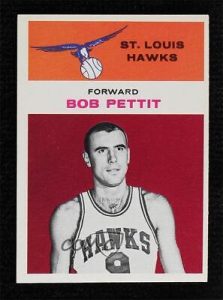 These last two cards are definitely the most notable cards for Bob Pettit besides his official RC, as they were released during his active playing career.

The 1961 Fleer Bob Pettit #34 features a black-and-white image of Pettit in his Hawks jersey placed on a red background with the St. Louis Hawks logo on top on an orange background and player’s position and name between the colorful boxes.

The card is part of the 1961-62 Fleer basketball set, which was not too popular when it was released back in the day, but it is certainly considered one of the hottest one nowadays. Boasting such greats as Wilt Chamberlain, Elgin Baylor, Jerry West and Oscar Robertson, the set also has a number of Hall of Famer rookies like Walt Bellamy, K.C. Jones, Sam Jones and Lenny Wilkens.

Some hobbyists even call the 1961-62 Fleer the ultimate basketball set — at least for vintage cards out there, so the Bob Pettit #34 being one of the cards in this meaningful set is notable enough. 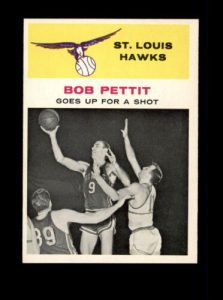 The 1961 Fleer Bob Pettit #59 is an action subset card that was in the same set as the above colorful base card #34.

This card features Bob Pettit in game action — going up for a shot with the ball in his right hand. The action shot is obviously black and white, and the top background with the Hawks logo is yellow.

As mentioned, the 1961-62 Fleer basketball set is considered the ultimate hoops edition, so this Bob Pettit #59 card is notable for being in one set with many legendary players and rookies.

The 1961 Fleer Bob Pettit #59 is also one of the three player cards officially released while he was an active player, so it’s a significant Bob Pettit card for sure. This Fleer card is also more affordable than many similar cards of the same type of players, so in our humble opinion it’s a great opportunity.

Bob Pettit as a player and one of the greatest power forwards of his time is also an intriguing personality, so all his cards are considered valuable today.

The autographed cards command collectors’ attention for being a part of history, and signed by the legend. The 1961 Fleer basketball set pieces add significantly to his legacy and are also a part of a timeless artwork that every basketball card aficionado would want to add to his or hers collection.

And finally the 1957 Topps Bob Pettit official rookie card is obviously the most valuable card of the former player, iconic for being one of the very few cards for Bob Pettit originally released during his playing days. It’s a solid collectible that stands out from the rest not only due to its value and potential, but also for its genuine vintage appeal.

Whatever Bob Pettit card you choose to spice up your collection, we wish you good luck in trading — and happy collecting!