Wilt Chamberlain was a dominant force in the world of professional basketball. Whether or not you are a big basketball fan, his game in which he scored 100 points remains one of the most iconic scenes in the sport and beyond. His personality so legendary makes his rookie cards and, more, highly sought after by collectors.

In this article, we’ll take a look at some of the best Wilt Chamberlain cards and delve into what makes them so special. 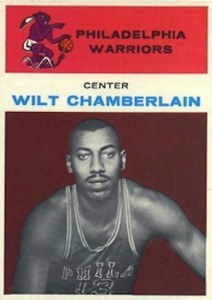 The Wilt Chamberlain 1962 Topps Rookie Card is one of the most iconic and valuable basketball cards of all time. Featuring a bold design and a youthful image of Chamberlain, collectors highly sought after this card and has consistently fetched high prices at auction. This amazing card features a unique combination of red and blue text on a white background and is highly prized by collectors.

This card is also notable for its rarity, as it was only included in the 1962 Topps set, which was released at a time when Chamberlain was just beginning his professional career. Disputing the rarity of the cards is not so hard to find it in great shape and high grade. The main concern for collectors who want to grade their Wilt’s rookie is centering and some print defects that may occur. 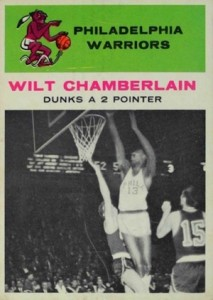 Although it is not the most highly sought-after Wilt Chamberlain card in the release, Card #47 is still a popular choice among collectors. This card, which is part of a subset featuring action shots, shows Chamberlain dunking as a member of the Philadelphia Warriors. Its layout is similar to that of Chamberlain’s rookie card from the same set. Despite not being the top choice, this card still attracts a lot of attention from collectors. 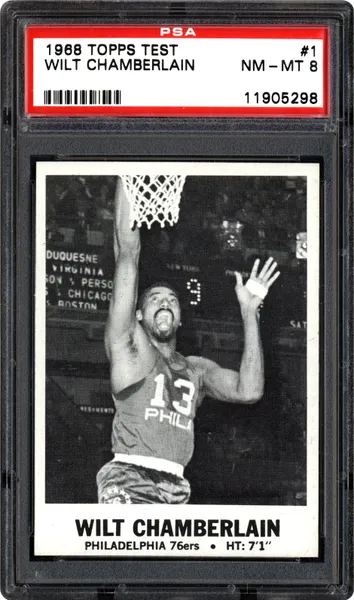 The Wilt Chamberlain 1966 Topps Test Issue Card is another highly sought-after Chamberlain card that collectors prize. This card was issued as part of a test run by Topps, meaning it was only produced in limited quantities and was never widely released to the general public. The card features a black and white image of Chamberlain on the front, along with his name and height. The back of the card includes a brief biographical sketch of Chamberlain and a list of his accomplishments up to that point in his career. The rarity and uniqueness of this card make it a highly coveted collectible, and it has consistently commanded high prices at auction. 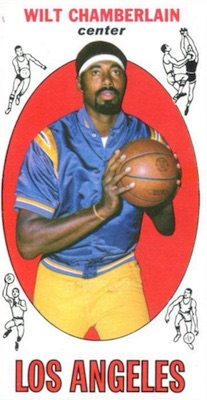 The 1969-70 Topps Basketball Wilt Chamberlain card is the first card in the set and is more popular than the other “tall boy” basketball set from Topps. This set was also the first basketball set produced by Topps since 1957-58, and it marked the beginning of a string of successive Topps basketball sets that lasted until 1981-82. The card features a red background and has four small drawings of basketball players in the corners of the border. Collectors highly prize this Chamberlain card. 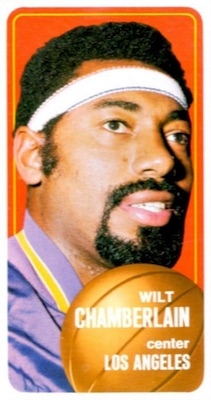 The 1970-71 Topps Basketball Wilt Chamberlain card features a close-up image of the giant center, displayed in rich colors against a red-orange background. Its “tall boy” design effectively showcases Chamberlain’s size. The card also includes Chamberlain’s name, team, and position in white text over an image of a basketball in the bottom corner. 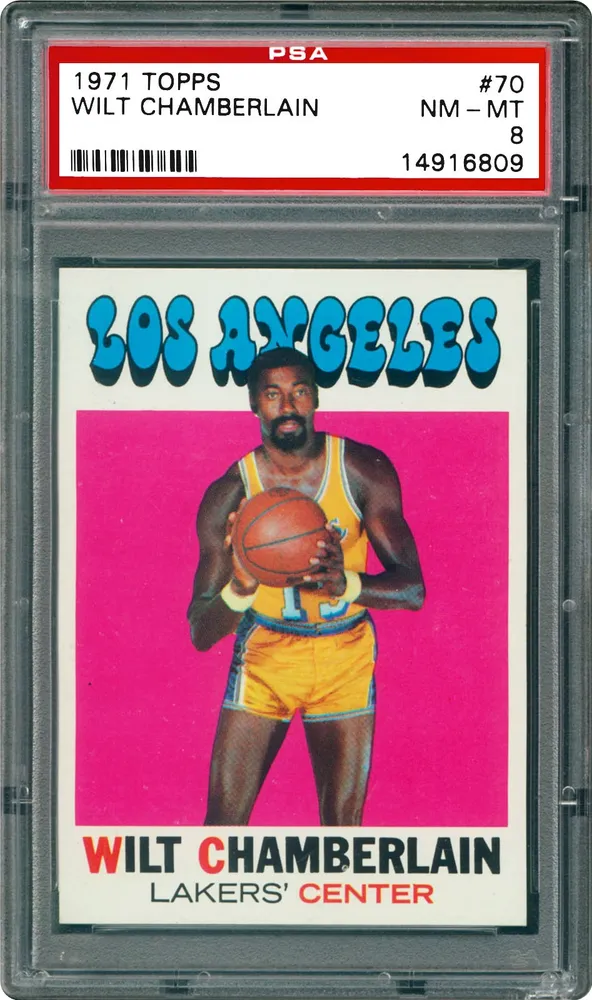 The Wilt Chamberlain 1971 Topps Card is another classic Chamberlain card that collectors highly prize. This card was released as part of the 1971 Topps set, which was one of the first basketball card sets produced by Topps after it acquired the rights to the NBA. The card features a color image of Chamberlain on the front, along with his name and team. The back of the card includes a list of Chamberlain’s stats and accomplishments and a brief biographical sketch. This card is notable for its bold design and high-quality printing, which have helped it to stand the test of time and remain a popular choice among collectors. 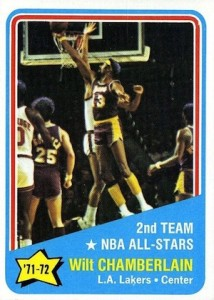 As an NBA All-Star in almost all of his 14 seasons, it’s fitting to list a Wilt Chamberlain All-Star subset card. This card can be found in the 1972-73 Topps set and remains a highly sought-after collectible despite its poor image quality and the text box that takes up over 25% of the card. Like many cards from this era, the centering on this Chamberlain card is also not perfect. 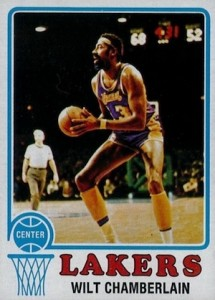 Although he was no longer actively playing in the league, Topps included a Wilt Chamberlain card in their 1973-74 Topps Basketball release. This card is notable for featuring one of the few full-action images of Chamberlain, as most of his other cards have a single-color background with him as the main image. This card represents an affordable option for collectors interested in acquiring a Chamberlain card.

Subsequent to his retirement and starting in the late 1990s, some of his autographs appeared in upper deck products. 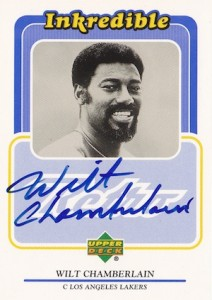 The Upper Deck Retro set, featured a highly sought-after “Inkredible autograph” set with a Hall of Fame checklist that had never been seen before. These unnumbered autograph cards, which were included at an average rate of one per box, are highly valuable. The Wilt Chamberlain card is particularly popular and has fetched prices in the thousands. It is also worth noting that the card features a rare large smile, as such expressions were uncommon on Wilt Chamberlain cards. A very rare Level 2 parallel version of the card, numbered out of 13 in reference to Wilt Chamberlain’s jersey number, is also available. 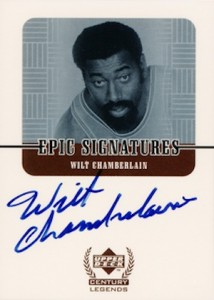 Upper Deck’s Epic Signatures set is another excellent option for collectors, featuring on-card autographs from a group of impressive former players. These cards are included at a rate of approximately one per box, similar to the Upper Deck Retro set. The classic card design pays tribute to the former stars of the NBA with a large signing area and a simple image demonstrating minimalism’s power. The century parallel, which features a gold image and is hand-numbered to 100, is a particularly noteworthy variation.

The Most Expensive Wilt Chamberlain Rookie Cards on eBay

Being one of the game’s greats – Wilt Chamberlain’s cards are hot property. Here are some of the most expensive ones out there right now,

Who Was Wilt Chamberlian?

Wilt Chamberlain was a pioneer of this game, known for his impressive scoring abilities and dominance on the court. He holds the record for scoring the most points in a single NBA game (100) and is the only player to average over 40 and 50 points per game for an entire season. Chamberlain was a highly sought-after college freshman, drawing interest from over 200 colleges and universities before ultimately choosing to attend the University of Kansas.

However, he left after two seasons due to the use of tactics such as triple-teaming and stalling to limit his impact on the game. He joined the Harlem Globetrotters for the 1958-59 season before being selected as a territorial pick by the Philadelphia Warriors in the NBA draft. Chamberlain quickly became one of the most dominant players in the league, leading in numerous categories, including total rebounds, field goals, and points. Wilt’s battles with Bill Russell are legendary.

He was named the 1960 NBA Rookie of the Year and the league’s Most Valuable Player and went on to lead the league in points for six consecutive seasons. Chamberlain was a seven-time All-NBA First Team player, two-time NBA All-Defensive First Team player, 13-time All-Star selection, and the 1960 NBA All-Star Game MVP. He held many NBA records during his 14-year career with the Philadelphia/San Francisco Warriors, the Philadelphia 76ers, and the Los Angeles Lakers.

He won NBA Championships with the 76ers and Lakers and was named NBA Finals MVP in 1972. Chamberlain was inducted into the Naismith Memorial Basketball Hall of Fame in 1978 and named to the 50 Greatest Players in NBA History list in 1996. He died of congestive heart failure in 1999.

In conclusion, we can say that the story and achievements behind Wilt Chamberlain make his card valuable and desirable even nowadays! So, we are not at all surprised that even younger collectors want to have one or more significant cards from Wilt’s career in their collection. Considering the rarity of some of the cards we have previously mentioned, it is important as we approach the purchase to be certain that the card is authentic.

So, no matter whether you are a novice collector or a seasoned one, any of the best cards of Wilt Chamberlain found in this article will be a great addition to your collection.