Jerry West is a player you have definitely seen — if not on the court, then as the Logo Man, gracing the most famous basketball emblem in the world, as the NBA has chosen West’s silhouette to symbolize the league, its players, and the game we all love. The former Los Angeles Laker, also known as Mr. Clutch has definitely earned it: his elite all-around game, outstanding playmaking abilities, and sharp shooting in the closing minutes is considered one of the best ever.

A proud NBA champion with the Lakers, in his 14-year career West made the All-Star team 12 times, was an All-Star MVP once, and is the only player in history to become the Finals MVP while representing a losing team.

After hanging his sneakers, Jerry West went on to coach the Lakers, and later become the scout and the legendary general manager, responsible for the stunning success of the Lakers dynasty — from the Showtime in the 1980s and 1990s with Magic Johnson and Kareem Abdul-Jabbar, all the way to early 2000s with Kobe Bryant and Shaquille O’Neal. 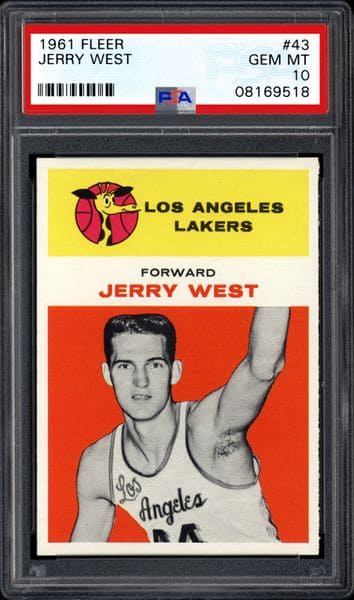 Part of the 1961-62 Fleer Basketball set, which is considered the ultimate vintage set, this Fleer Jerry West piece is surely the hottest Jerry West rookie card right now. It was not the case when the set was released five decades ago — back in the day, it was just another basketball set. Recently though, the cards from this set have become popular on the vintage market, especially the higher-graded, good-quality ones.

This Jerry West card design features the player on a red background, the player’s name above the red box on white background, and the team logo on top of the card. The logo is colorful too, which makes the Lakers’ purple look a little bit weird on the yellow background. Nevertheless, it’s a neat and minimalistic design, pretty modern and eye-catching for the early ’60s.

The 1961 Fleer Jerry West RC is definitely not a cheap card, and if you’re lucky enough to find it in mint condition, be ready to pay a decent amount of money for it. 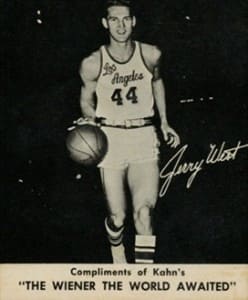 The 1960 Kahn’s Wieners Jerry West rookie card is the only Los Angeles Lakers player in the 1960-61 Kahn’s Wieners basketball set, which only had 12 cards in it.

The set was distributed with hot dogs, made by the famous local meat producer Kahn’s, based in Cincinnati, Ohio. Hence, the other 11 cards are the Cincinnati Royals players — and the legendary Oscar Robertson a.k.a. The Big O, also made the set.

The 1960-61 Kahn’s Wieners basketball set was actually released one year prior to the aforementioned 1961-62 Fleer Basketball set, that’s why the 1960 Kahn’s Wieners Jerry West RC is a remarkable card, considered the first Jerry West rookie card ever. It might not be that sought after as the official Fleer card, but is certainly respected by collectors and Jerry West fans alike. 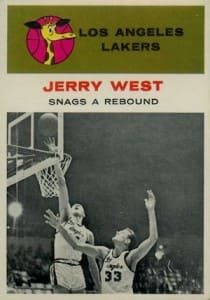 The same 1961-62 Fleer Basketball set also included this “In Action” card (dubbed as IA by the hobby people). It is an alternative card and is part of the subset, with a similar but different design.

The design features a black and white game image, but some collectors say it’s not obvious that Jerry West “snags a rebound”, as the card says — and some even argue that Mr. Clutch even appears on it.

It’s true that Rodney Clark Hundley aka “Hot Rod” is in the foreground (he was wearing #33 for the Lakers at the time), and the background player’s number is not clearly seen. To add up, it’s also questionable who the rebound goes to, so this image choice by Fleer certainly raises concerns.

Nevertheless, being a Jerry West rookie card, it’s a popular piece of cardboard and ranks as one of the best Jerry West cards for sure.

This Jerry West card is from the Logo Man’s last season in the League (1973-74) and is regarded as one of the notable cards of the legendary player.

Jerry West was sidelined for most of the season, having appeared in just 31 games due to a groin injury. West was feeling great though, he was even selected for the All-Star Game, and was getting ready to continue his pro career. Unfortunately, the ownership couldn’t find a suitable solution for the All-Star guard’s contract with the Lakers — the only team he’d wished to play for, and Jerry West decided to call it a career that season.

This is an affordable card, and certainly could be an amazing addition to your vintage collection.

Another affordable — yet notable Jerry West card is his 1973 Topps NBA All-Star piece.

Featuring the color in-game photograph, despite the set having mostly studio pictures of players posing against a background, this Jerry West #100 surely stands out from the crowd. The unique design also has the player’s avatar-like headshot in a circle, in the bottom right corner, so the fans could better recognize his face.

The 1973 Topps basketball set itself is not considered too successful, because some of the key rookies from that season were missing, and some players were pictured in a setting that looked too simple (just plain background), as mentioned above. However, many greats were included in this vintage set, including Jerry West, Julius Erving, Wilt Chamberlain, Kareem Abdul-Jabbar, Pete Maravich, Bob McAdoo and others. 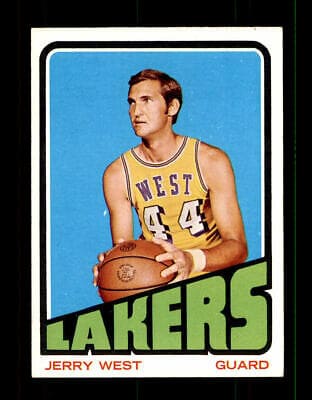 The 1972 Topps Jerry West #75 basketball card certainly attracts the attention of collectors because of its stylish design. In the early seventies, the colorful background with the player’s game photo and the team name on the bottom of the card was sort of innovative and looked truly modern. Even to this day, this minimalistic vintage layout looks amazing, doesn’t it?

The beautiful 1972 Topps basketball set also included the official rookie card for the legendary Julius Erving aka Dr. J (in yellow and red colors), which made it an important and desirable set.

This Jerry West card is among the key cards in the set and is definitely popular among collectors too.

As you may have noticed, due to Topps legal agreements, many cards in the seventies lacked team names on players’ jerseys. Some players were even pictured in t-shirts, others in-game jerseys but with no team names at all — or with player names across the chest.

The 1971 Topps Jerry West #50, similarly to the 1972 Topps Jerry West #75 above, just had WEST printed on the yellow Lakers jersey. Team city — Los Angeles is printed in large blue cartoon letters on top, and the team name Lakers (with player’s position) in smaller letters on the bottom, just underneath the player’s name.

This card is part of the 1971 Topps basketball set, which was the first Topps set measuring 2½” by 3½” after two years of producing the vertical, so-called Tall Boy sets.

The 1969 Topps Jerry West card belongs to a meaningful and important set — it was the first official Topps release since the 1957 success.

The design of this Jerry West card features the player’s name and position on top, and the team on the bottom, with four black and white player icons around the colorful oval with the player’s image. The image is a color photo already, but Jerry West is pictured in a t-shirt instead of a game jersey, as Topps wasn’t authorized to use team names on the photographs at that time. 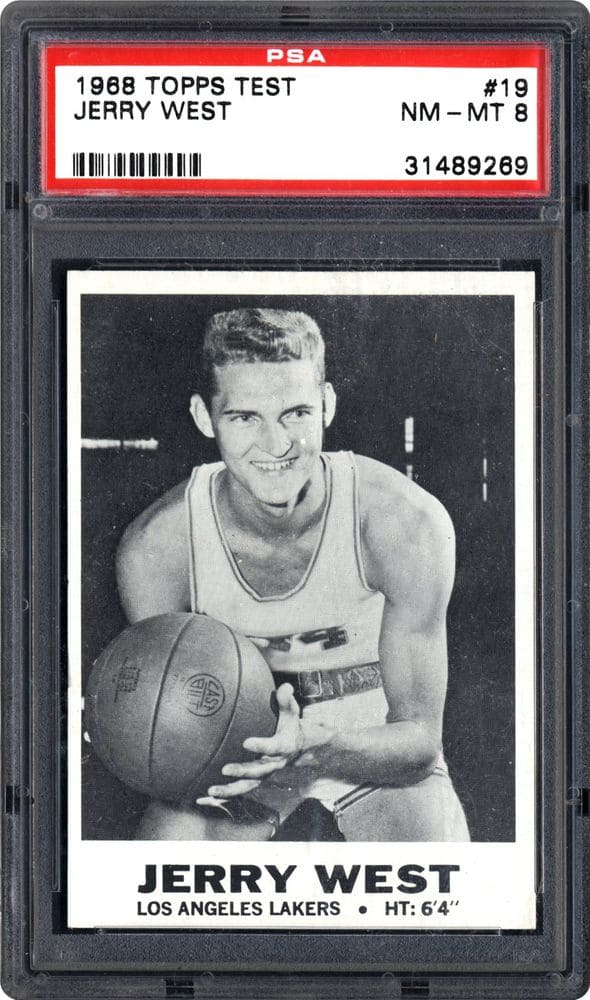 Perhaps one of the most significant, and the most notable Jerry West sports cards — besides his rookie cards, is this 1968 Topps Test Jerry West #19.

Part of the mysterious unique 1968 Topps Test set, this card is black and white, simply designed, with an in-action player shot on the front, and a piece of a Wilt Chamberlain puzzle image on the back. All 22 cards of the set make up the entire puzzle, when put together.

Besides Jerry West, the set includes 14 other Hall of Famers like Wilt Chamberlain, Bill Russell, Earl Monroe, Elgin Baylor and Oscar Robertson to name a few. The 1968 Topps Test set is considered an important one, as it was the first “test” release before Topps officially got back in the hobby the following year — with the full-fledged 99-card 1969 Topps set mentioned above.

Being a legendary player, a true staple of the game, and an important figure for the Los Angeles Lakers franchise, Jerry West certainly commands attention and respect from fans and collectors of sports cards and beyond.

Being the most demanded ones, the Jerry West rookie cards are your best bet. Make sure you add one to your vintage collection, especially if you can find them with sharp corners, clean and neat surfaces, and are well-centered. Other Jerry West cards are a great choice too, with the 1968 Topps Test rating even better than some rookie cards.