Do you remember the tennis shoe “Flight Baylor?”  Do you recall seeing Elgin Baylor’s portrait on boxes of “Power Flakes?”  You don’t?  Of course, you don’t because these fictional sneakers and cereal boxes never existed.  But they should have.  Elgin Baylor was a graceful, acrobatic, and delicate player whenever he stepped on the court.  Unfortunately, he played before NBA games were commonly televised, so no matter what awe-inspiring moves he displayed in any particular game, most of the world never saw these moves.  His teammates and opponents did, however, and many can never forget watching these signature moves!  Many NBA historians consider Elgin Baylor to be one of the greatest NBA players of all time, yet Baylor is often underrated.

Born in Washington D.C. in 1934, Elgin Baylor fell in love with basketball as a teen.  Even though he faced some cruel instances of racism and segregation, he proved himself as a player.  Elgin was drafted by the Minneapolis Lakers with the Number One overall pick in the 1958 NBA Draft.  Elgin Baylor went on to play 14 seasons for the Minneapolis Lakers and Los Angeles Lakers and he made his mark on the team and the entire sport.

Elgin Baylor’s basketball cards were few in number but they are incredibly popular and they will be sought after by fans and collectors for many years.  Let’s take a look at Baylor’s Rookie Cards and Best Cards. 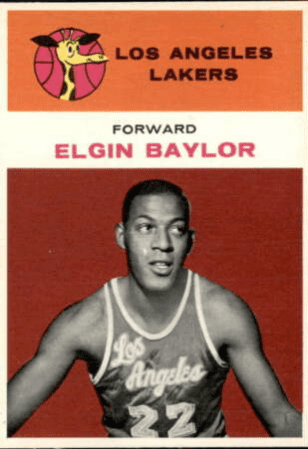 The card is very captivating.  The black and white image of Elgin Baylor shows a look of knowing confidence and it is on top of a brick red background.  The name Elgin Baylor is set firmly in the upper center portion of the card.  This position suggests that name recognition was most important in basketball cards of the time period.  The team name and kooky mascot of the early Lakers is at the top of the card over a dark orange background that compliments the red on the card.  The Lakers mascot of the time was a giraffe head with a long thin neck.  Many NBA teams of the era had fun mascots that unfortunately fans don’t see in the modern days of the sport.  Mascots of the New York Knicks, Cincinnati Royals, and Boston Celtics were equally as whimsical as the 1961-62 Los Angeles Lakers. 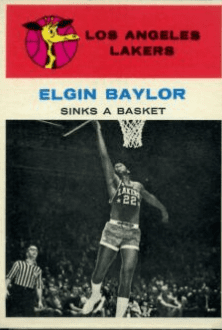 A second Elgin Baylor rookie card from the 1961-62 Fleer set is this remarkable card from the “In Action” subset.  This card may be a slightly more affordable option for collectors who want to get their hands on an Elgin Baylor Rookie Card.  This is still an incredibly popular card from an amazing set so it will still have a decent price tag. That shouldn’t be a surprise since Elgin Baylor is actually one of the greatest players in NBA history…

This card has an image of Elgin in the air appearing to be sinking an easy lay-up.  His name is still prominently in the upper center of the card and above it is the team name and mascot.  This Fleer set really contains some aesthetically pleasing cards that any collector may envy. 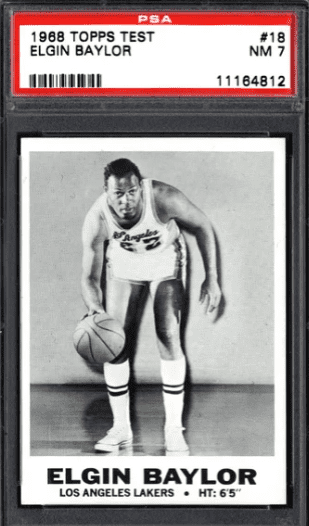 Next on the list is a true rarity and a highly desired card by collectors.  The 1968-69 Topps Test Elgin Baylor is highly coveted because few exist in the entire world.  The 1968-69 Topps Test set includes 22 cards and they are all entirely black and white cards.  On the back of each card was a piece of a Wilt Chamberlain picture.  This set is so rare because it was never actually released to the public when it was initially produced.  As a matter of fact, collectors in the hobby weren’t even aware that this set existed until the 1990’s!  These cards definitely have value and collectors will be thankful to get their hands on them. 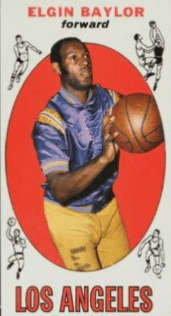 The 1969-70 Topps Basketball set was a triumphant return for the Topps company in producing basketball cards.  This is a nice, unique “tallboy” set, named this way since all of the cards have more height than typical sports cards, yet the width is the same.  Some of the best players in NBA history are included in this Topps set but there is something missing from all the cards.  Due to team compensation issues, Topps was not allowed to include team names or team mascots on the cards.

This card features a picture of Elgin Baylor posing to line up a free throw.  That famous look of confidence is evident on his face.  Baylor’s image is set against a red oval background.  On either side of the oval are 4 cartoon drawings depicting basketball action.  At the bottom of the card is the name of the city where Elgin played.  Even though Topps couldn’t use team names, by this point, fans knew Elgin Baylor was a Laker.  Name recognition is again evident in this set since Elgin Baylor’s name is at the very top of the card.  This card is widely available but high grade versions of the card will cost some money.  Even mid-grade levels of the card can have a decent price tag.  Because of the scarcity of Elgin Baylor cards in the hobby, any card may fetch a pretty penny. 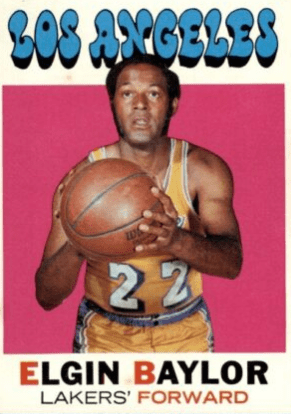 This Topps set, from the final year of Baylor’s career, is rather fancy.  The city name on the card is displayed in a psychedelic font that was common and popular during this time period.  The name Elgin Baylor is very prominent on the card due to the size of the letters.  Collectors may notice that the team name, Lakers, is printed on the card.  The Topps company had received permission to do this once again.  Elgin’s image is set against a pink background which is very eye-catching.  This card is obtainable and may be a less expensive option for collectors trying to purchase an Elgin Baylor card.  But it really is a cool card and fans of NBA history should own at least one Elgin Baylor basketball card released during his playing career.

Throughout his career, Elgin Baylor was a phenomenal overall player.  His shooting, rebounding, and passing were all top-notch.  But what he was best known for are the incredibly acrobatic moves on the court that seemingly defy gravity.  Baylor made opponents wonder how many moves a man could make while he was hanging in mid-air!  One of his teammates, Tommy Hawkins, once said of Baylor, “He would take it (the basketball) in and hang and shoot from all these angles.  Put spin on the ball. Elgin had incredible strength.”  Elgin Baylor was known for his signature hanging jumpshot.  According to Jerry West, Elgin’s longtime teammate, “He was one of the most spectacular shooters the game has ever known.”  So little of these moves were ever televised or recorded.  But if you look, you can find some videos that contain some samples of this amazing work.  In one such video, Elgin Baylor can be seen making a pseudo-underhand lay-up in front of the basket and it appears the ball is just gliding off of his fingertips.  In another frame, viewers can see Baylor take a step and leap towards the basket as the ball changes hands 3 times while he is in mid-air.  Words can not accurately describe the skill and finesse Elgin displayed on the court.

Elgin Baylor had an absolutely phenomenal career.  In 14 seasons, he was an 11 time NBA All-Star and a 10 time member of the All NBA First Team.  He was inducted into the Naismith Memorial Basketball Hall of Fame in 1977.  In 1996, he was named as one of the 50 Greatest Players in NBA History.  And in October 2021, he was named to the NBA’s 75th Anniversary Team.  But the NBA Title always remained elusive.   When his career began, he led the Minneapolis Lakers to the NBA Finals in 1959 where they lost to the Boston Celtics.  This started an amazing rivalry between the Lakers and Celtics that was famous throughout the 1960’s.  Baylor led the Lakers to the NBA Finals 7 more times, but never captured the title.

Perhaps the lack of a championship was the reason Elgin Baylor was underrated for so many years?  It is an interesting question, because his teammates and opponents knew exactly how good Elgin Baylor was.  Fans of NBA History and active collectors in the sports cards hobby do recognize how amazing Elgin Baylor’s career was.  His cards will only gain in popularity now since he is receiving the well-deserved recognition.  If you can obtain a copy of an Elgin Baylor card, you should make sure that you do not hesitate to grab it!