Over the course of 14 NBA seasons, Oscar Robertson, point guard, amassed 26,710 points, 9,887 assists, and 7,804 rebounds.  Look at those numbers with awe!  No wonder some people consider Oscar Robertson to be one of the best to ever play the game.  In 1962, Robertson became the first player in NBA history to average a Triple-Double for The Entire Season!  In that year, he averaged 30.8 points per game, 12.5 rebounds per game, and 11.4 assists per game.  Oscar Robertson was a 12-time NBA All-Star playing for the Cincinnati Royals and Milwaukee Bucks.  The “Big-O” helped lead the Milwaukee Bucks to their very first NBA title in the 1970-71 season.  His success continued with Milwaukee for several years.  Success followed Oscar Robertson throughout his career and many players consider themselves lucky to have been his teammate.

Let’s take a look at Oscar Robertson’s rookie cards and some other notable cards. 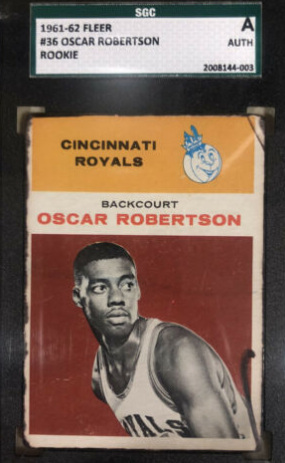 We start with the 1961-62 Fleer set, one of the only major basketball card sets of the 1960’s.  The Oscar Robertson card from this set is recognized by many collectors as Oscar Robertson’s first mainstream rookie card.  Collectors can find this card and obtain it but it will require a decent sum.  This card features a black & white image of Oscar on a powerful red background.

The look of confidence on Oscar’s face is unmistakable.  The team name and logo are on the top of the card with a yellow background.  And Oscar Robertson’s name is boldly displayed in red letters in the upper center portion of the card.  This is uncommon for today’s cards but the importance of name recognition in 1961 appears to have been a focus in this incredible Fleer set! 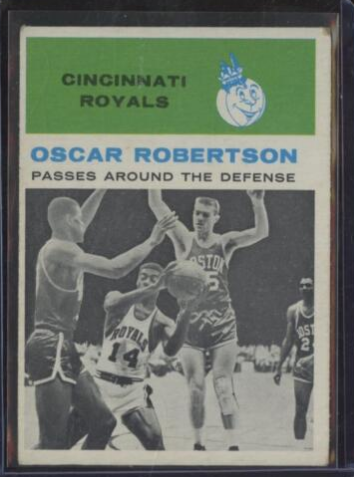 We find another Oscar Robertson rookie card from the same 1961-62 Fleer set with the tagline, “Passes Around The Defense.”  Another black & white image shows Oscar gracefully angling a pass between 2 towering Boston Celtics defenders.

One can imagine how fluid Oscar Robertson’s movements were on the court.  We have already seen the career numbers so it isn’t hard to imagine the end result of this particular play that the photographer captured.  This is a really neat card, and has value to collectors.  As stated, this black & white image features Oscar in a white Royals jersey against a white background.

Again, Oscar Robertson’s name is in the upper center position on the card.  The top of the card features the team name and the iconic 1961 Cincinnati Royals Mascot over a forest green background.

The mascot is an image a collector can never forget.  It is a basketball with human facial features and a goofy grin.  The mascot wears a crown and inside the crown you have tall buildings symbolizing the landscape of Cincinnati, Ohio. 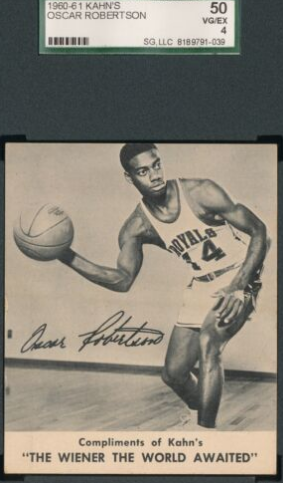 This unique card is viewed by some collectors as an Oscar Robertson rookie card.  It is the first professional Oscar Robertson card and it is part of a 12 card set of primarily Cincinnati Royals players.  Considered an “oddball” card because of its oversized shape, it is a popular card and may be difficult to find.  Kahn’s is a meat processing and distribution company founded in Cincinnati, Ohio in 1883.

Easily recognizable in Southern Ohio, Kahn’s was well-known throughout the Midwest.  The cards from this set feature the tagline, “The Wiener The World Awaited.”  Kahn’s released sets of these cards throughout the 1960’s, and Oscar Robertson, being a member of the Cincinnati Royals had multiple cards released by this company.

Since there was an absence of mainstream cards during this decade, collectors truly value these Oscar Robertson cards. 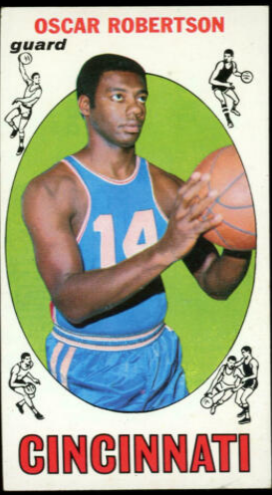 The release of this set marked the first major release of any mainstream basketball card sets since 1961.  This set also marks the return of the Topps Trading Card Company to producing basketball trading cards.  This set is unique in many ways.  First, Topps released this set as “Tall Boy” cards.  And as the name suggests, the cards are taller than typical trading cards but their width remains the same as other cards.  Second, Topps did not include team names or logos on any cards due to a compensation issue with the NBA.

But this set captures the intensity of each player.

You can certainly see that on Oscar Robertson’s face!  Robertson knew how good he was and how valuable to the sport he was.  This card is one of the last times fans will see him wearing #14, because after this season he was traded to the Milwaukee Bucks.  Following some down years in Cincinnati… who knew what was to come in Milwaukee…

Another unique “card” this product from Topps was released with the 1969-70 mainstream set.  This is such a cool “card.”  This Ruler card features a caricature of Oscar Robertson standing next to a ruler displaying his height.

The actual height of this “card” is 9 ⅞” and one can imagine children using this as a bookmark in their copies of How to Play Better Basketball by C. Paul Jackson, or their copies of the 1969-70 Basketball Rules Book released by The National Federation of State High School Athletic Associations. 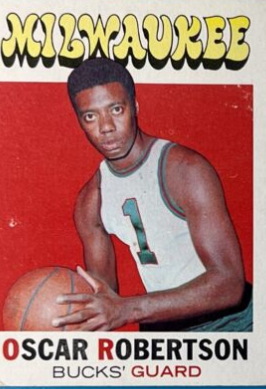 This bright card shows a determined Oscar Robertson fresh off his championship first season with the Milwaukee Bucks!  It is clear that Topps was still trying to establish themselves back in the basketball trading cards business, but this card does display the team name, The Bucks.  The psychedelic font displaying the city name, Milwaukee, at the top of the card definitely attracts attention.  The solid red background behind Oscar’s image certainly catches the eye.  The intense focus in Oscar Robertson’s eyes displays exactly what kind of player opponents would have to face!

Here’s a list of the most expensive Oscar Robertson cards that aren’t considered “rookie” cards.

Basically, the best of the rest.

Like many star athletes, Oscar Robertson came from a humble beginning.  Born in Charlotte Tennessee in 1938, Oscar moved to Indianapolis, Indiana when he was an 18-month old baby.  Oscar chose to play basketball over baseball in his neighborhood.  He attended Crispus Attucks High School, an all-black high school in the waning days of legal segregation.

This atmosphere remained even after Oscar left.  Following his college career, Robertson was named one of the captains of the United States Summer Olympics Basketball team.  Like most teams Oscar Robertson touched, the Olympics team turned to Gold, winning the Gold Medal in impressive fashion!

In October 2021, Oscar Robertson was named to the NBA 75th Anniversary team.  Slots on this team were reserved for THE BEST!  Oscar Robertson certainly fits that description.  Having the career numbers that Robertson had, fans of the NBA know exactly how good the man was.  In 1996, Oscar Robertson was voted as one of the 50 Greatest Players in NBA History.  In 1998, Robertson was honored again when the United States Basketball Writers Association renamed their College Player of the Year Award the Oscar Robertson Trophy.  The Kansas City Kings (formerly the Cincinnati Royals) retired the number 14 in honor of Oscar Robertson immediately after his retirement.  Of course, this retired number carried over when the Kings moved to Sacramento.

On top of all of his career achievements and statistics that he racked up throughout his playing time, one can not forget the man and father behind the legend.  Oscar Robertson may have achieved one of his greatest victories in 1997.  His daughter, Tia, suffered kidney failure due to her battle with the disease, lupus.  Oscar stepped up and donated one of his kidneys to her, saving her life.  At the time Oscar explained his action with the simple statement, “I’m no hero; I’m just a father.”  Well, sometimes you can be both a father and a hero.

All of the accolades and honors from his career and all of the amazing stories from his personal life suggest that Oscar Robertson basketball cards will be highly popular for years to come!  This amazing player had a spectacular career and when you are considered one of the greatest players in NBA History, your trading cards will be highly coveted by collectors.  And since much of Oscar Robertson’s career fell in the 1960’s decade, there are not that many trading cards of his available today.  There are some great examples out there and savvy collectors can often find good bargains.  But, a collector holding an Oscar Robertson card today may consider themselves very lucky!