The NBA legend Willis Reed has played in the league from 1964 till 1974 — all with one team: the New York Knicks. His jersey number 19 is now proudly hanging from the rafters at Madison Square Garden, and for good reasons. Playing at center, the 6-10 Louisiana native has led the New York franchise to 2 championship titles (1970, 1973), while averaging 18.7 points per game and 12.9 rebounds per game throughout his 10-season career.

Reed has won an NBA Most Valuable Player award once and an NBA Finals MVP award twice. With 7 NBA All-Star selections, Reed has also won an NBA All-Star Game MVP once, becoming the first player in history to become the MVP, the Finals MVP and the All-Star MVP in one season (1970).

The big man was known for being an aggressive competitor: his physical game on both ends of the floor and his commitment to the game of basketball earned him the well deserved respect among the peers he played against and the generations that followed.

Willis Reed is enshrined in the Naismith Memorial Basketball Hall of Fame, and is a member of both NBA 50th and the 75th Anniversary Teams.

Willis Reed rookie cards didn’t start appearing on the market up until 1969, despite Willis Reed being drafted in 1964. The first official Willis Reed release was 5 years after his New York Knicks debut. The sports cards market conditions were like that in the sixties, so his official NBA rookie card dropped even later than some unofficial cards with limited release. 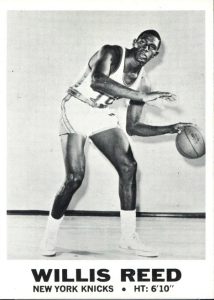 The 1968 Topps Test Willis Reed #7 is one of Reed’s first cards, and it’s also one of his most valuable. Part of the 22-card test set that Topps printed in 1968, this card is not an official release, and actually was leaked prior to the first official Willis Reed RC — so it’s considered a notable card for sure.

This is also a very rare card, with only a handful known to exist, which is why it’s worth so much. Even if you find one in poor condition, it would still be worth your attention.

This rookie card from the Topps Rulers subset is one of the most popular and most highly sought-after Willis Reed cards. Even though it is technically not a “card”, but a piece of foldable insert, more of a poster, it is still one of the popular collector pieces for Willis Reed. The 1969-70 Topps Rulers Willis Reed #19 features a cartoon image of Reed wearing his Knicks uniform and holding a basketball at his waist. The card is designed as a ruler, showing Reed’s hight at 6’10’’. 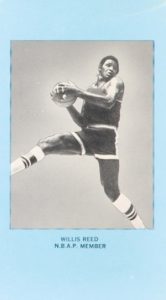 This is the first Willis Reed rookie card, but obviously an unofficial one, as it bears no logos, is unnumbered, has basic design and a blank back. It’s part of the 1969 set released by the NBA Players Association, and the release was not sanctioned by the league office. It is believed that the cards were cut out from Converse basketball shoeboxes, even though this assumption is not officially confirmed.

It is worth noting that the cards in the 1969 NBAP Members basketball set varied in sizes and slightly in design. The Willis Reed card for instance, has a larger light blue border than the other cards in the set. The player’s name and “N.B.A.P. member” is printed in black at the bottom, as usual. Each card features a black-and-white action photo of the player on a basketball court, or posed before a blank background like in the case of this Willis Reed card.

Topps promptly followed the NBAP release with their own take on the Willis Reed rookie card, so the Topps piece below is considered his first official one. 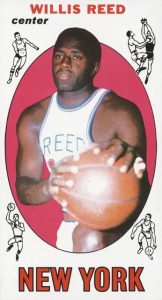 The most popular Willis Reed rookie card is his 1969-70 Topps RC. It’s also the most valuable, and as you can expect the price goes even higher especially for top condition copies. The 1969 Topps Willis Reed Rookie Card has a beautiful recognizable design, with a large action photo of Reed in the red oval in the middle, and the small black-and-white cartoon art in the corners. Willis Reed is pictured with his jersey worn backwards, with his name in the front. This was done by Topps to avoid licensing issues with the New York franchise, and such practice was common in those years, and specifically in this particular Topps set. Nevertheless, the card has great eye appeal, and is highly sought after by collectors.

The 1969 Topps Willis Reed Rookie Card #60 belongs to a staple set — the 1969-70 Topps basketball set, which is known in the hobby as the “tallboy” set, because the cards are taller in size than a regular card. The set includes such legendary NBA players and Hall of Famers as Wilt Chamberlain, Oscar Robertson, Walt Frazier, Jerry West and rookie cards of Lew Alcindor (Kareem Abdul-Jabbar), John Havlicek, Earl Monroe, Don Nelson and Wes Unseld.

Besides the aforementioned Willis Reed rookie cards, there are a few other notable Willis Reed cards, which are worth mentioning as well. 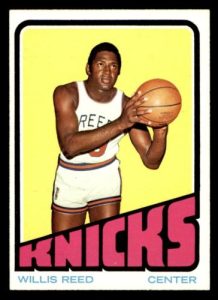 First, the 1972 Topps Willis Reed #129, featuring a distinctive design, modern at the time and considered stylish. This Topps Willis Reed basketball card has the team name Knicks at the bottom in diagonally raising red letters and Reed on the yellow background in his jersey worn backwards again, holding the ball in the shooting motion. The chosen color palette is weird, but interesting: there is a black border, but the player’s name and position is depicted in blue font.

The 1972 Topps basketball set is a significant release for a couple of reasons: one is the breakthrough design, as mentioned before, and the other is that it included the Julius Erving rookie card, and the Julius Erving All-Star card — both some of the notable cards for Dr. J. The set also included the Phil Jackson rookie card, as well as cards of such key players of that era as Wilt Chamberlain and Pete Maravich. 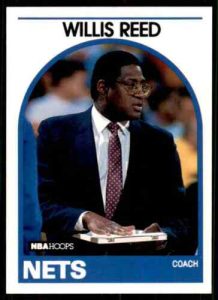 While other Willis Reed cards featured in this article are his player cards, this one is Reed’s coach card. Part of the 1989 Hoops basketball set, this card shows Willis Reed in a suit and tie with a pad in his hands, coaching the New Jersey Nets. Coach’s name is on top of the card, while the picture is placed in a blue arch with NBA Hoops logo and team name at the bottom.

The set also included announcers, and some signed cards, but is not considered too popular. Nevertheless, this Willis Reed coach card is still worth paying attention to. 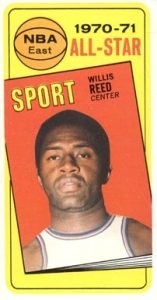 One of the most popular Wills Reed basketball cards is certainly the 1970 Topps Willis Reed All-Star #110. The card has great eye appeal thanks to the tilted image design, with a slightly reclined frame of Willis Reed’s face on a red background with SPORT printed on top, and the main yellow background with the NBA East basketball logo and the 1970-71 ALL-STAR in large letters.

The card is the most notable Willis Reed All-Star card and it’s a valuable piece based on this factor alone. It’s also part of the significant 1970 Topps basketball set — as an All-Star subset. 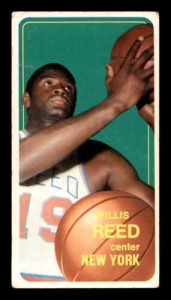 Card front features a picture of Willis Reed’s close-up headshot on a green background with yellow border. A large basketball in the lower corner contains his name, team city and position, while a thick white border surrounds the card with rounded inner corners. 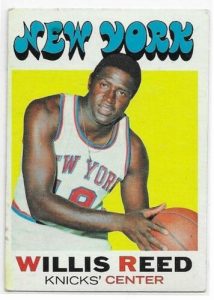 Finally the 1971 Topps Willis Reed #30, which is perhaps the most notable out of all non-rookie cards of Willis Reed. In another attempt to spice up the design, Topps has come out with a fancy font for the team name on top of the card, a colorful background and the player’s name with his initials stressed out in red on the bottom of the card. Hence, the 1971 Topps basketball set is considered one of the most beautiful and demanded vintage sports card sets of the NBA.

The 1971 Topps basketball set is also notable because it was the first time when Topps has used a regular card size, after releasing the tallboys in the two preceding years.