One of the best Quarterbacks of his generation, Steve Young was able to transition from USFL marquee signing into an absolute all-timer.

In this article, we’re going to look at the best Steve Young rookie card options out there for investors, along with some other great card choices too.

The first official rookie card of Steve Young comes from 1986 when he made his NFL debut. However, there are some other interesting cards from his early career that you might be interested in. 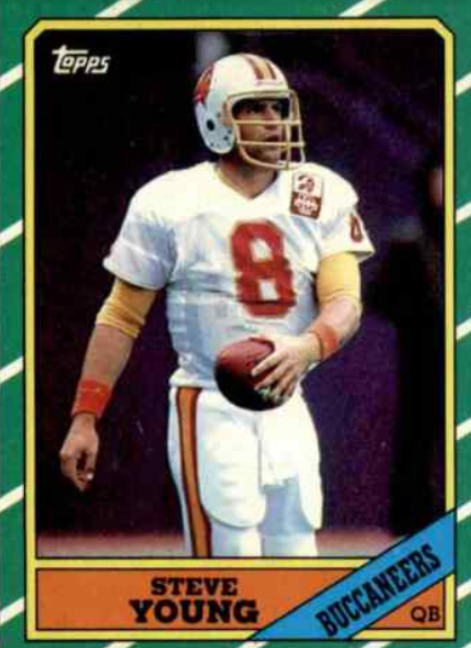 This card’s the holy grail of Steve Young cards. It’s his first and official NFL rookie card from 1986 when he made his debut with the Tampa Bay Buccaneers. And the interesting thing about this season is that Young’s future with the Buccaneers was deemed as uncertain due to his mixed early performances.

Along with the Jerry Rice card that was a part of this set, Steve Young’s card makes the Topps set from 1986 a memorable one. You’ll also find some other great cards in this set, such as Reggie White, Bruce Smith, Boomer Esiason, and others.

Before this year, Young plied his trade in the USFL, which was doomed and fell apart in 1985. At the time, Young was deemed as one of the most exciting prospects in the league but somewhat failed to meet the expectations with the Buccaneers.

Despite all that, this card was the first card of Young in the NFL and is considered to be the true rookie card. It’s an extremely valuable card, and it will sell like hotcakes if it’s in gem mint condition.

Even though most 80s cards will not sell for as much as 70s cards, for instance, this card is something of an exception.

Here are a few reasons why:

Normally, the prices for this card will vary, depending primarily on the condition of the card. You’re looking at several hundreds of dollars if not even more for a well-rounded and well-kept card. 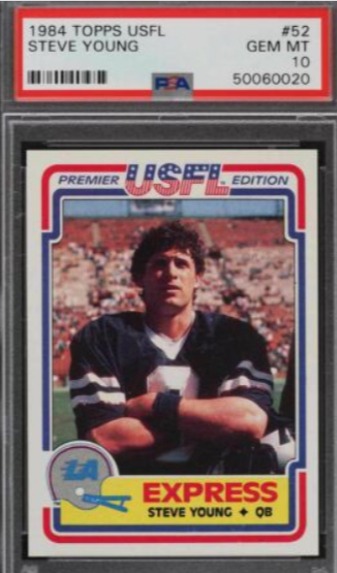 Now, this one might not be the official rookie card of Steve Young. However, it’s the first card of his in any of the sets, as it’s from his first professional season with the LA Express in the USFL (now defunct).

It features the limited print design that’s so hugely sought-after, especially because this design was typical for USFL cards, which only ran for 4 years. Originally, this card was issued in a 132-card set, and it’s very rare today to find one in good condition.

This is what makes the card so immensely popular, even today. The red, white, and blue color scheme set and the legendary image of Young with his arms crossed make it an iconic card and a must-have for Steve Young fans. It’s almost as valuable as his 1986 rookie card if in the right condition. 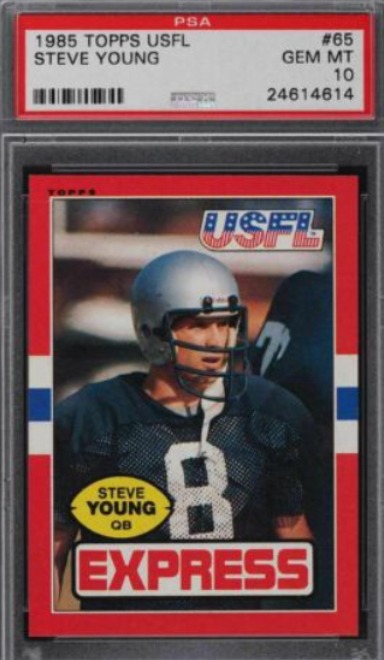 Again, the 1985 Topps Steve Young card is not his true rookie card. Rather, it’s another card from his USFL days with LA Express where he started to make a name for himself and established himself as one of the most talented quarterbacks.

You can consider this one as a budget rookie card alternative for Steve Young. While not a true rookie card, it still holds a great deal of value – especially sentimental value for Steve Young fans. 49ers fans will also appreciate this card, as it comes from the time when people were still largely unaware of his talent.

But even this card can cost quite a lot if it’s in good condition. The prices might be anywhere between a few hundred dollars to even more, depending on its condition. PSA-rated cards will normally have a higher value. 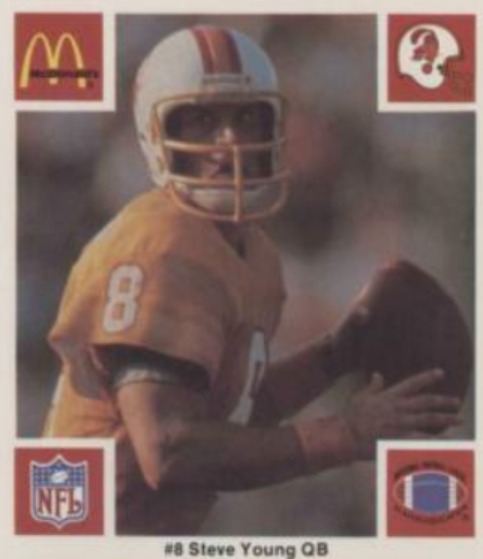 The McDonald’s cards represent a nice piece of memorabilia from Young’s first season in the NFL. These cards were distributed regionally across various MCDs all over the country. So there are several variations to be found (4, to be precise).

These cards were actually a part of a scratch-off competition, so these cards might appear slightly more scratched than most other cards. You can see that it has a scratching area right below the image.

But despite that, these cards are still popular pieces of Steve Young memorabilia, even though they’re something different than his regular card. Because they’re from 1986, they represent one of the earliest versions of Young cards that can still have a great deal of value, especially if in good condition and unscratched.

There are four versions of this card: blue (as seen above), gold, black, and green. The blue version you see in the image is the rarest. 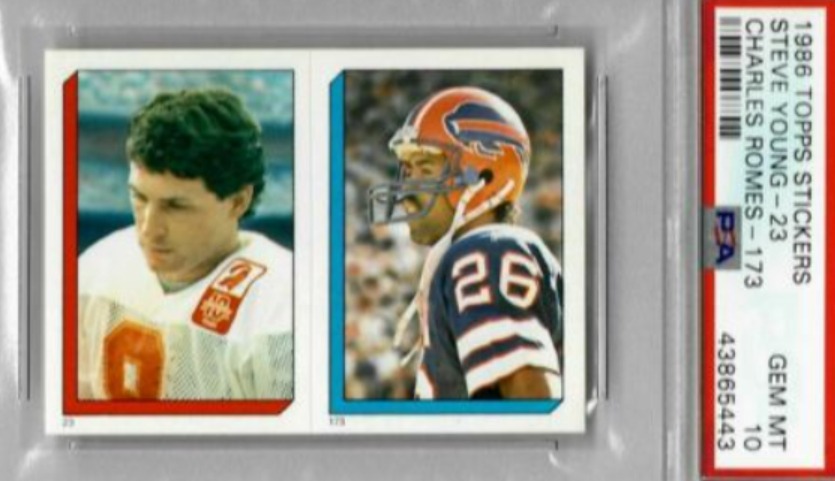 If you’re more of a sticker collector, this one can be a really nice addition to your collection. His sticker was put together with Charles Romes’ sticker. You can see that it’s from his rookie season with Buccaneers, which will appeal to both Buccaneers fans as well as 49ers fans.

Normally, stickers don’t sell as well and for as much as cards do. However, stickers are meant to be nice additions to your collection rather than selling them on for profit. And Steve Young’s sticker is one of the most popular stickers from the 1986 Topps sticker set.

If kept in proper condition, the value of the sticker can go into the hundreds. Also, finding a PSA 10 sticker is almost impossible, so you’ll need to keep a good eye on the listings and hope to find something of great value. 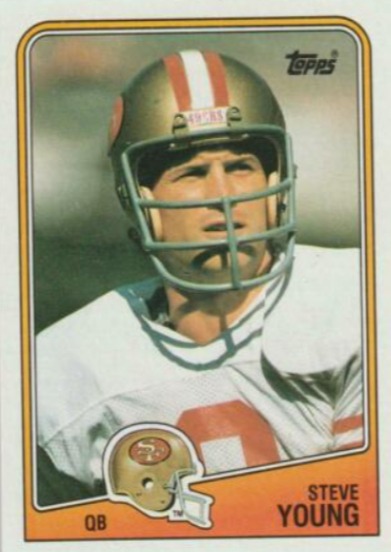 49ers fans, this one’s for you. It’s your first chance to collect a card with Steve Young in the colors of 49ers, which is what was only the start of a great career he had with this team. He stayed with the 49ers until 1999 and has built a legacy as one of the best passers in the league ever, which was quite impressive after a rocky start with the Buccaneers.

For the first few years, Young played as a backup for Joe Montana but eventually got the chance in 1990 when Montana suffered an injury to his elbow. Initially, he got off to a rough start in his career as a starter for the 49ers.

However, he soon recovered and went on to become one of the best QBs in the league, which won him the 1992 MVP award. And this card is from the year where it all started – 1988.

Although the design of the card is not that special, it’s the sentimental value that adds to the overall value and worth of the card. And that’s especially the case if you’re a 49ers fan or you just admire the career Young has had with this team. 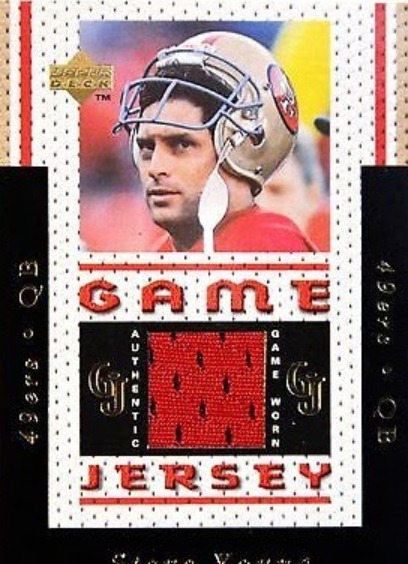 You might struggle to find this one today. But this card was a part of what was one of the first sets that featured game-worn jerseys on cards. It represents a big shift in the card-collecting hobby, as many people started to be impressed by this design, which led to many other cards being used this way.

At that time, only the elite players got one of these cards, and Steve Young was one of the first ones to receive it. Even though the match-worn patch of the jersey is rather small, it holds a great deal of value because firstly, it’s incredibly rare. And secondly, it’s from a time where Steve Young was already considered the best QB in the league. 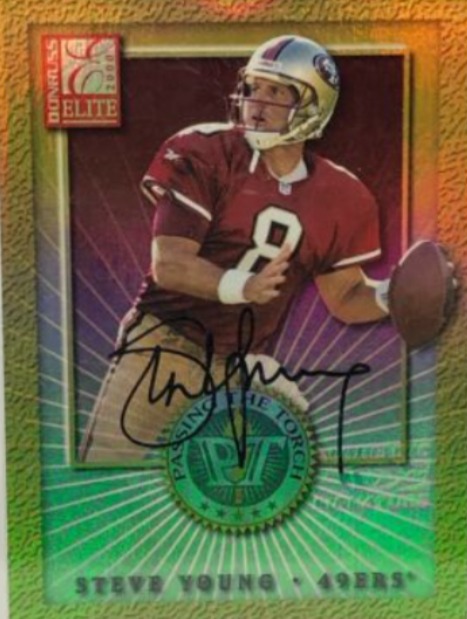 There’s another card that’s worth mentioning from Steve Young’s career – and this one comes from his later parts of his career. In fact, this is perhaps one of the last cards that Steve Young was featured on.

It has an image of Young in his classic passing pose, getting ready for yet another big play. The card is a part of the Passing The Torch set by Donruss, which features only the best players in the league, especially the best passers.

Only 500 of these cards were printed. However, what’s even more impressive about this particular card is that only the first 50 ones were actually signed by Steve Young. The card is meant to celebrate the greatness of Steve Young and if you’re his admirer, then waste no time to get this one.