Patrick Mahomes was the son of a Major League player, and you can tell with the arm he’s got.

Mahomes football cards are a high-ticket collector item, with the star QB being one of the modern greats.

This article will look at the best Patrick Mahomes cards that you can buy, both rookie and otherwise.

This Patrick Mahomes rookie card is probably going to be the best rookie card you’ll find out there for most people. It’s from his draft season for Kansas City Chiefs.

The card features Mahome in a typical action of his, and it looks realistic because it’s been shot during a game. Most other cards from his rookie season have a photo of him posing for the card, and this one’s different in that regard.

In the center of the bottom of the card, you’ll see Mahomes’ name and his team, while on top, there’s the famous Panini Prizm logo. Getting one of these still almost surely guarantees profit in the next few years or even decades, so getting your hands on several of these cards might be a good investment. 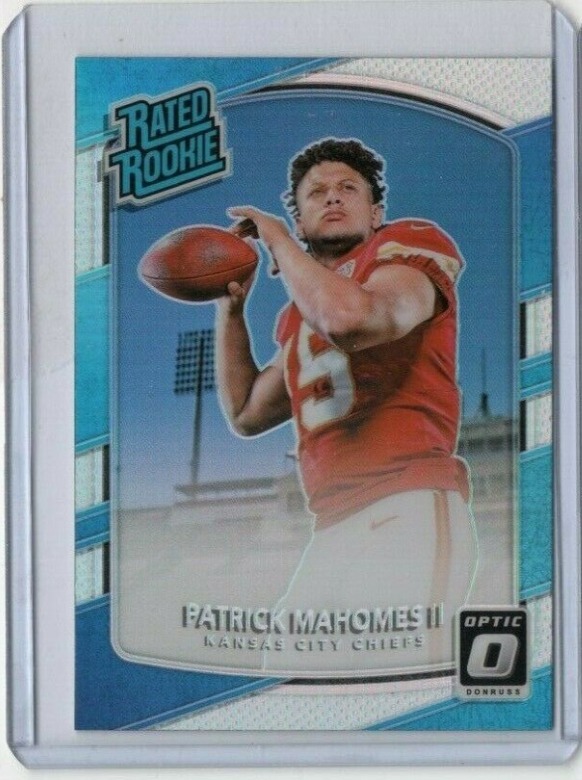 Again, this card is still widely available on eBay and all over the internet. But the numbers are dwindling, because people are saving these for the future, as they’re almost certainly going to increase in value given Mahomes’ resume.

The National Treasures collection is always a favorite for serious collectors.

If you’ve got the finances to afford it, the National Treasures sets are up there with some of the best you’ll find.

There’s even the auto/patch combo, which is my personal favorite.

You can see why the patch auto is worth so much, too. It has Patrick Mahomes in action on the photo, while there is also an autograph of Mahomes right under his photo. Next to the photo, there’s also a patch of a match-worn shirt of Mahomes.

The problem is – the NT cards require a great deal of investment right away. So if you’re not ready to invest big right now, it’s better to look at other Patrick Mahomes rookie cards. 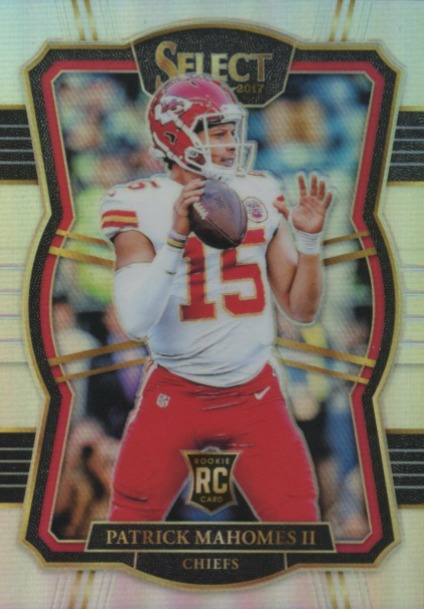 The Panini Select Patrick Mahomes rookie card is a worthy alternative to the above-mentioned rookie cards. It represents a sensible option if you want a good, safe alternative that also looks nice.

This Select card features a relatively intricate design with an action photo of Mahomes in the center. There’s a shining border around the photo with some nice lines that span to the left and right of the image. 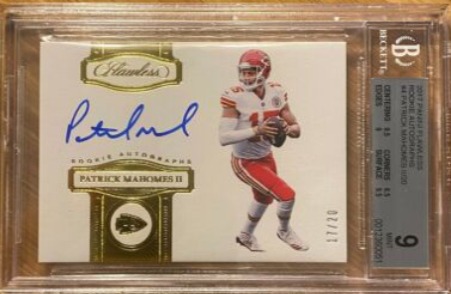 Here’s another gem of a card from Panini from Mahomes’ rookie season. This one’s also worth an arm and a leg, but it’s one of the most elegant and beautiful Mahomes rookie cards you’ll ever find out there.

If you love a good card with an autograph on it, then this one’s one of the best you’ll find on the market. There’s also interesting writing on the back of the card describing Mahomes as the next big star – how accurate that is!

If you can get your hands on one of these beauts, do it! But be warned, it’s going to cost a fortune and it’s not that easy to get. I also love the patch of the match-worn shirt that’s present on this card – it makes it look even more sophisticated.

There’s a lot of choice in terms of Mahomes rookie cards, and the ones I’ve mentioned above are the hottest cards at the moment. However, all of these cards are worth taking a look at, too.

Here’s another card that has a lot of potential for the future. It features a pretty minimalistic design, but perhaps an even more interesting thing about this card is that there’s a photo of Mahomes on it from his Texas Tech days. Also, there’s an autograph by Mahomes on the card, increasing its value.

A well-kept card of this type can cost a fortune… but it can also have big rewards for you in the future. With the added autograph and the Optichrome technology, this card is a favorite among football card collectors. It’s a beautiful card that’s only going to grow in value, so if you can get one now, it’s a worthy investment.

With only 25 cards of this type released, it is one of the most sought-after and elusive rookie cards of Patrick Mahomes. The card shows Mahomes in action and has a patch on it, as well as an autograph by Mahomes himself. This one’s for those who are after rare cards that will either sit well in their collection or sell well to potential buyers and collectors of rare cards.