The Mickey Mantle rookie card is one of the most iconic cards in the hobby.

In this article, we’re going to take a bit of a deep-dive into the card’s value.

One of the most common questions I see in the card collecting world is “what is the value of a Mickey Mantle rookie card?” We’ll try and answer it here, but it’s not as simple as just putting down a marker and be done with it.

The simple answer is: it depends on several factors. Before you determine the value of an old Mickey Mantle rookie card, you have to look at several things about the card, such as:

At the very least, you should be getting several thousand dollars for a Mickey Mantle rookie card, regardless of its condition. But the well-kept cards can even cost much more than that – some prices can go into millions if you have a good card! In any case, you’re laughing if you have one.

Again, it’s not easy to just put down a set price and be done with it. You see, card prices will fluctuate constantly. This is especially true for newer cards, but older cards can vary in prices, too. Then there’s the question of the quality of your card, whether you have it graded professionally, and how many interested parties there are.

As you may see, the price ranges are extremely big, but it’s quite a common occurrence with older cards. Let’s take a look at each card and see why they’re so popular, and how you can determine the price. 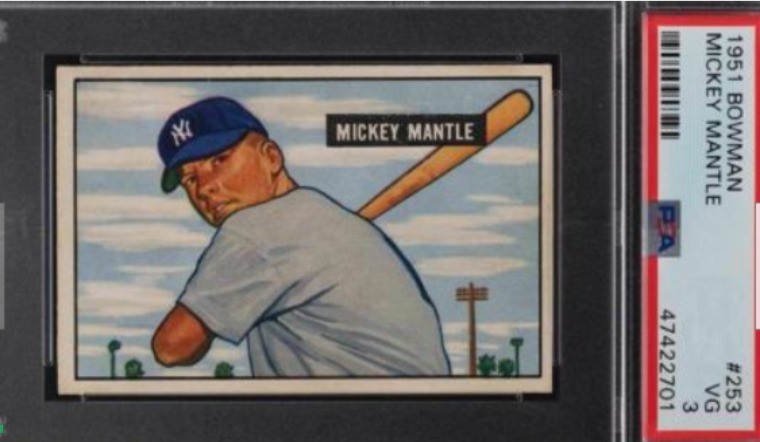 Overall, the 1951 Mickey Mantle Bowman card is considered his true rookie card. But surprisingly, it’s the 1952 Topps card that most people know about, which is why it costs more.

For the 1951 card, you’ll be able to get anywhere between $2000 – $1 million. Even in poor condition, this card will sell like hotcakes. But the truth is that you’ll almost never find one on sale.

At the moment of writing this, I saw a PSA 3 rated card listing with a price of $39.975. So even if you can find a card like this in decent condition, you’re looking at massive profits. It’s number 253 in the 1951 set, so that means that it’s even more scarce than the earlier numbers from the set. This only increases its value.

There’s no doubt that this 1951 Bowman Mickey Mantle rookie card is one of the most legendary cards in the hobby. But it is always compared to the 1952 Topps Mickey Mantle card (perhaps unfairly) because the 1952 card tends to be more popular and well-known.

The design of the card features a big photo of Mantle with his bat on the front of the card, with square white borders on each side of the photo. The back of the card was printed vertically, and it features a description of the player.

Here’s the back of the card: 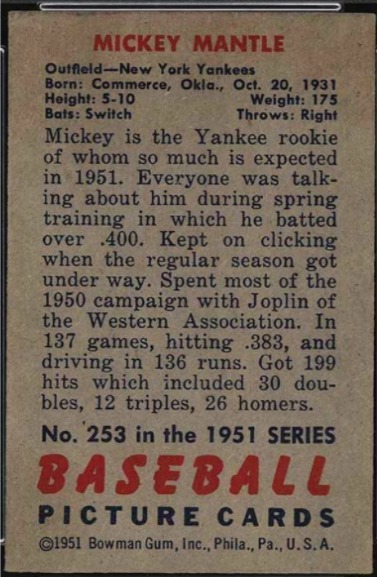 It’s interesting to read the description on the back of the card. It describes a young hopeful Mickey Mantle who is still seen as a promising player at the time.

Why is it so Valuable?

So why is this card so damn valuable? 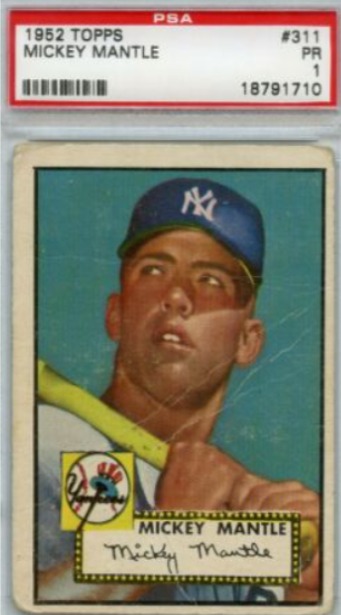 This card is the holy grail of the card collecting hobby. It’s not his true rookie card, but it’s by far the most valuable card of this player. Why is that so? Firstly, this is considered an iconic card because it’s the first Topps card to have Mantle on it. And secondly, it’s the design of the card that wins out – it looks somewhat futuristic, even (for the 1950s, at least).

The value of this card is thus extraordinary. Even if in poor condition, it will cost at least $5000, but more likely, $10.000 to $40.000 in such condition. If it’s in good or mint condition, this card can command a massive price tag of $1 million to $2 million at least (though not many cards will reach that value).

The top selling price was in 2018 for a MT 9 rated card, and it was $2.880.000! This particular card on the image, rated PR 1, is listed at $26.599. Even with clear centering issues and surface problems, the card still costs that much. Although on the higher end, it’s hard to distinguish all the small details that will determine the price. 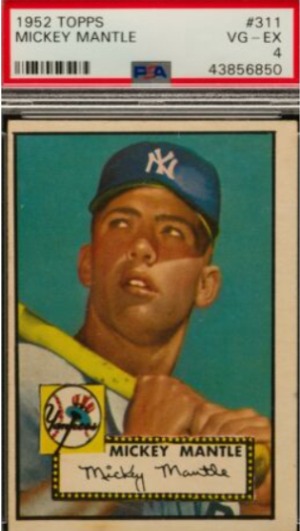 Notice the difference in quality on the surface of the card. The centering is still WAY off, but much better already at first sight than the PSA 1 rated card. 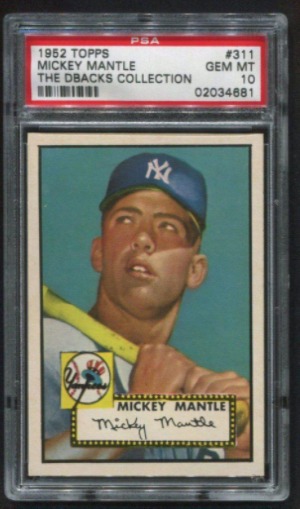 So that’s the price range you can expect with the 1952 Mickey Mantle card. Again, it is near impossible to find a sensible price for even a poorly-kept card – but you can expect many people to be interested in it if it does come available.

Famously, this card is a part of the 1952 Topps set, which was the first large set of this card producer. The set had 407 cards altogether – although the first Topps baseball set comes from 1951, which only had 52 cards. They changed the approach in 1952 in terms of design, too. It featured a portrait of the player on the front and biographical info and stats on the back.

This card is more popular than the 1951 card, even though it’s not Mantle’s rookie card. That’s something of a rarity in the card collecting world. However, if you look at the card itself, you’ll see why that is. The design and the image on the card make it an iconic card, and it became something of a trend-setter for the next generations of cards.

Today, card collectors often compare it to the 1951 Bowman card – and many times, this one is the preferred card. Firstly, the design of the card is much more sophisticated compared to the 1951 card. They changed the look by adding some new graphical elements, and it’s worked out quite nicely for Topps.

Again, the back of the card is quite similar to the 1951 card. It features a description of the player, some of his stats from his rookie season, and some additional information. Mantle is described as “Joe DiMaggio’s replacement” in this description. It’s always interesting to read these descriptions of players that went on to become greats.

Why is it Valuable?

How to Determine the Condition of a Mickey Mantle Rookie Card?

The condition of the card is one of the main determining factors that will tell you the price and the value of a card. You can opt to use a professional grading service, but you can also do a quick evaluation yourself to see how the card stacks up in terms of value.

Here’s what you should look at:

How many Mickey Mantle Rookie cards are there?

The 1951 Bowman card is considered as the true Mickey Mantle rookie card. The PSA has graded around 1500 of these cards, while there are significantly fewer 1952 Topps cards – only around 1200. So finding one will definitely be hard, especially if you’re looking for a card in good condition. In that case, you may need to spend big.

Some also argue the 1952 Topps card to be his rookie card. It’s because this was the first card from the Topps set to have Mantle in it. But ultimately, the 1951 Bowman card will remain to be known as his true rookie, despite the fact that the 1952 card is more popular and more expensive.

Which Mickey Mantle cards are worth money?

Why are Mickey Mantle cards so expensive?

The biggest reason why these cards are so expensive is that they’re rare. The 1952 card is especially rare because there were not that many printed originally, it had a fantastic and futuristic design, and it was the first Topps set to feature Mantle’s card.

Additionally, many of these cards were returned in 1952 to retailers as many were not printed properly, so many of them were even discarded. Overall, this card is considered to be the holy grail of baseball cards, and of course, Mantle was a legendary player in the MLB so that also raises the price quite a bit.

How much is a 1956 Mickey Mantle card worth?