Jackie Robinson is the most important baseballer of all time.

Let’s take a closer look at some of the best Jackie Robinson baseball card options. There are not that many cards for this player, so the choice is not as wide as you may think. 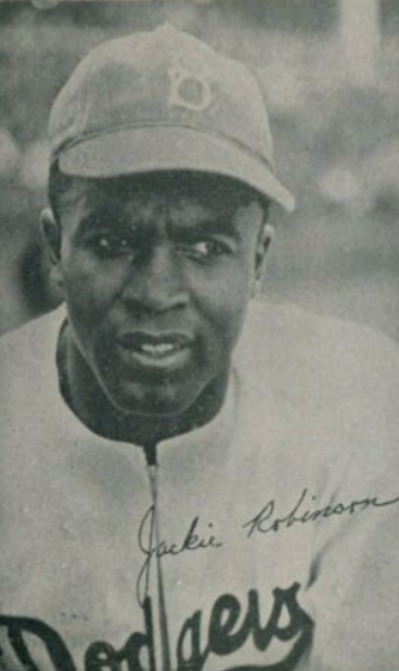 This 1947 Bond Bread card is perhaps the earliest recognized Jackie Robinson card. 1947 was the first season when Jackie Robinson broke the record for being the first African American baseball player in the MLB.

The card was a part of the Bond Bread brand, which distributed bread together with baseball cards. Originally, the cards had a squared-off look while there were some other variations where they had rounded corners. Today, these cards are very rare, so you’ll need to spend several hundred bucks for an ungraded one, and even more for graded cards.

There are several variants of this card that we should talk about here, although it’s his portrait variation that’s the most common one. In these variants, Robinson posed in different poses, so there’s some variety to this card: 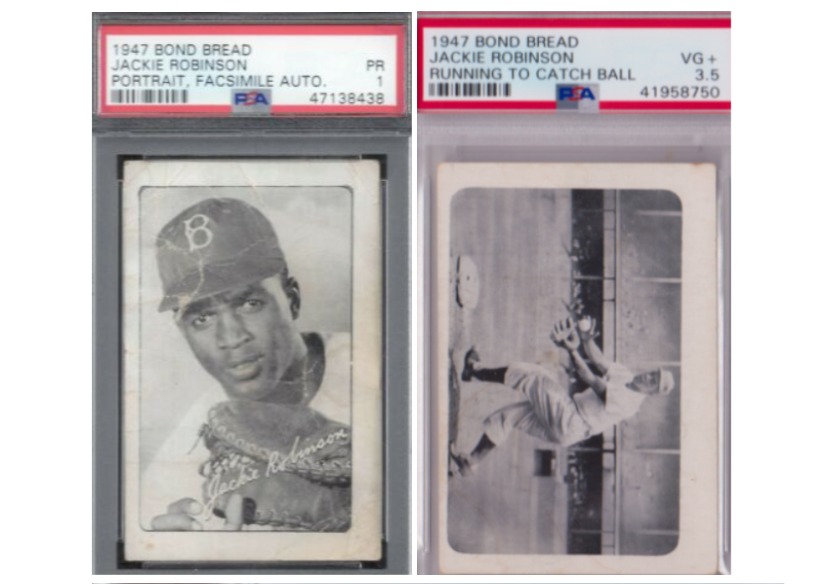 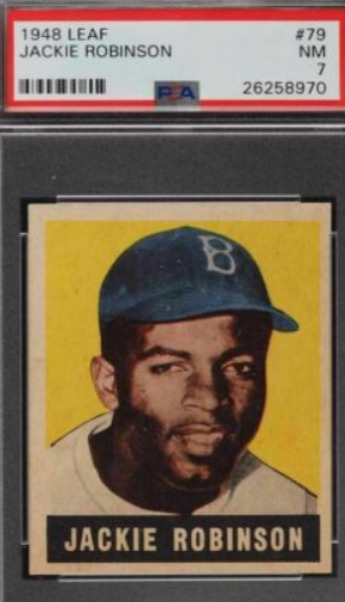 The 1948 Leaf card is the quintessential Robinson card. It’s one of the first cards people think about when they talk about Robinson cards. It’s also his only recognized true rookie card. Without a doubt, it’s one of the most valuable baseball cards of all time.

An impressive thing about this card is that there are some instances of the card that have been graded PSA 7, like the above one – some have even been rated higher. However, the majority of these cards tend to be quite poorly kept, which means they’re going to be much cheaper than a card like this one above.

Officially, the card came out in 1948, but there are many people arguing that it actually came out in 1949. That’s why some call it a 1949 Leaf card instead of 1948 Leaf. If you’re prepared to accept the fact that your Robinson card might not be well-kept, then you might be able to get it for a few thousand dollars, if not a few dozen thousand.

However, if this card is in good condition like the above one, the price will skyrocket into six figures – which is understandable, especially with old cards like this one. 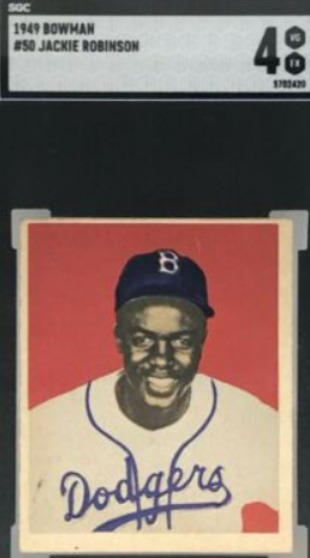 In 1949, Jackie Robinson became one of the best players in MLB. He spent the majority of his season training to become a better player, and with the help of a fellow player, George Sisler, he managed to become a valuable player for the Dodgers.

This Bowman card comes from that season. It’s another card that collectors see as a must-have if you’re an old card lover. Robinson always had a positive expression on most of his cards, but this one is especially notable for his wide and bright smile.

Even though it’s a highly popular Jackie card, they’re notorious for poor quality print and just poor quality in general. Centering can also be an issue, which is visible from this above card. It’s not as valuable or as popular as the 1948 Leaf card, but still right up there with the best cards of the player. 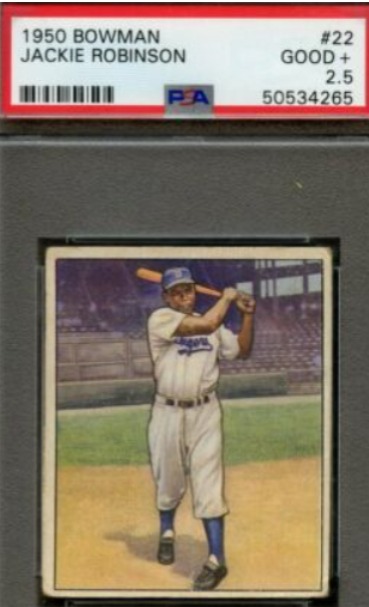 If you want an action-style card and you don’t want a portrait card, then this is your first chance to get a glimpse of Jackie Robinson in action. This card is especially known for its art style, as it features an impressive color set for that time as well as its typical realistic look.

It’s different than what cards looked like up until 1950, although it’s not as in-demand as some other Robinson cards. This one can still fetch a decent price of up to several thousand dollars, although much easier to buy even for more casual collectors.

Despite not being as popular as 1948 Leaf, it’s still a fan-favorite and one that many collectors have fallen in love with due to its style. 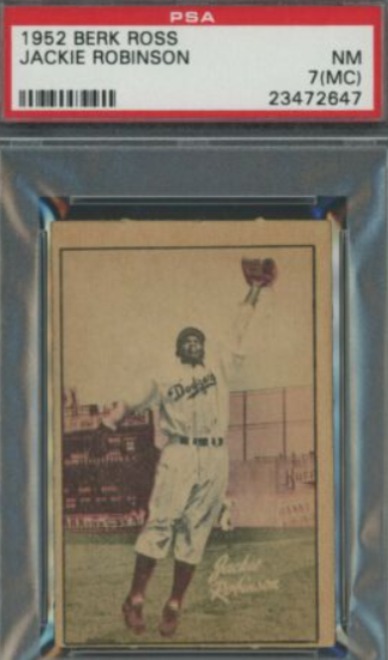 The 1952 Berk Ross is one of the more affordable options that you may consider for this player. They’re unnumbered, meaning that they’re not easily tracked and you might find many knock-offs that look like the original – so be careful when buying ungraded cards.

The standout feature of this card is the jumping shot of the player. Sure, the image is not as crisp as many people would like, but that’s totally understandable considering the era the card comes from. 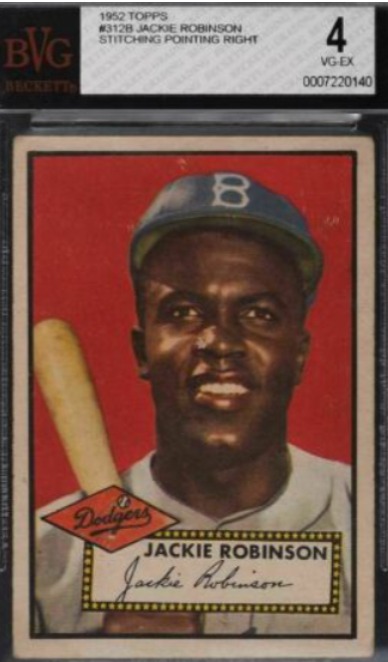 The 1952 Topps Robinson card is the first card of this player in a Topps set. It’s also one of the most iconic cards you’ll find of the first African American player in the MLB. In fact, it’s right behind the 1948 Leaf card in terms of value, although the prices can fluctuate quite a lot.

The red background makes for an intriguing design that has captivated the hearts of thousands of collectors from around the world. Again, we see the bright shining smile of Jackie Robinson who had to endure quite a lot of hatred, especially at the start of his career.

1952 was, in fact, one of the player’s best years in the league. And this card fits that narrative nicely because it’s one of the more exceptional editions of Robinson cards.

It’s a must-have if you like old cards and if you can afford to throw money at it. The price can go into five figures if the card is graded and in decent condition. 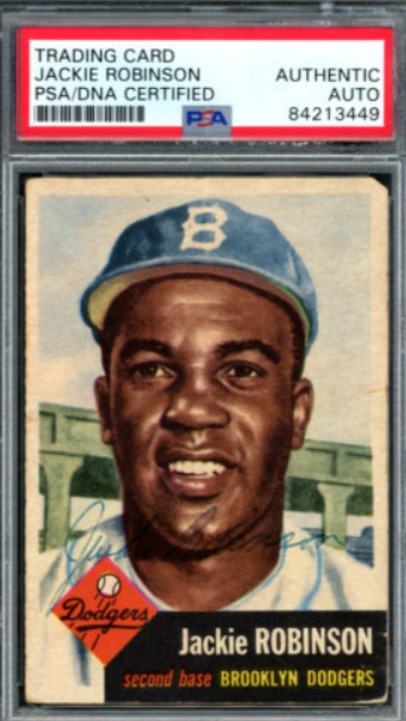 The 1953 Topps Jackie Robinson is perhaps the first card of this player that you’d get a complete package with it. It has an interesting description on the back of the card right at the time when Topps card started introducing this sort of design.

On the front, there’s a full headshot of Jackie Robinson, which might not be his best one, to be fair. The original card features a colorful design with the typical Topps look that was present those days. This card in the image is the autographed version, which will cost you a few extra hundred (or thousand) dollars.

The base Topps 1953 card is still one of the most popular Robinson cards to this day. While it might be a bit behind its few previous editions in terms of value, it’s still quite an expensive card if found in good condition. A couple of concerns about the card include its corners and centering, which might be off and thus decrease the value of the card. 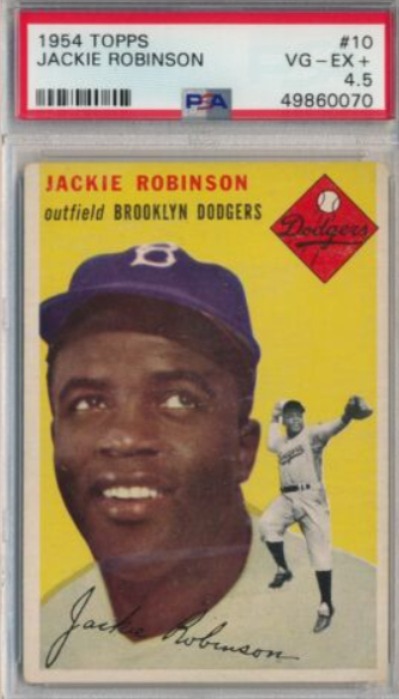 Topps changed it slightly in 1954 and went for a more colorful design, where portraits of players were fulfilled by colorful backgrounds. In this instance, you’ll find a yellow background, while the logo has been moved to the top of the card. An action photo of the player was also included.

One of the major differences here is the signature that’s visible right below Jackie’s head. This is a nice card to own, especially if you prefer older cards that have a bit more pop to them, which is empowered by the bright yellow background. 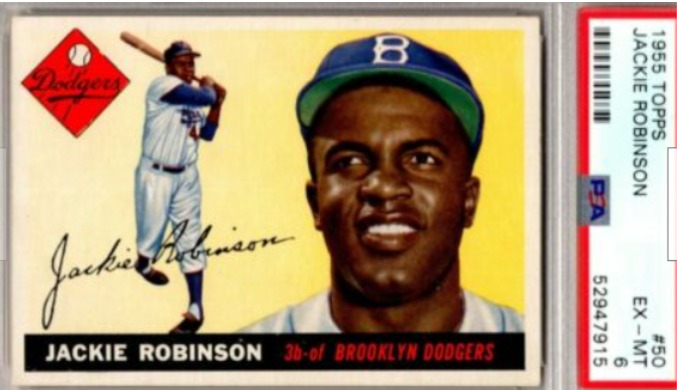 1955 followed the trend from 1954 where it moved to a more colorful design, although this one is not as vivid as the previous year’s card. It features a mixture of yellow and white on the background, while the entire design is horizontal instead of vertical.

The logo is moved to the left top corner, and there’s still an action image of the player as well as his headshot.

But this card is perhaps better known for Robinson’s achievements on the field, where he helped Dodgers win a World Series title. As always, you’ll find the soft smile of Robinson on the card on a background that really makes it stand out. 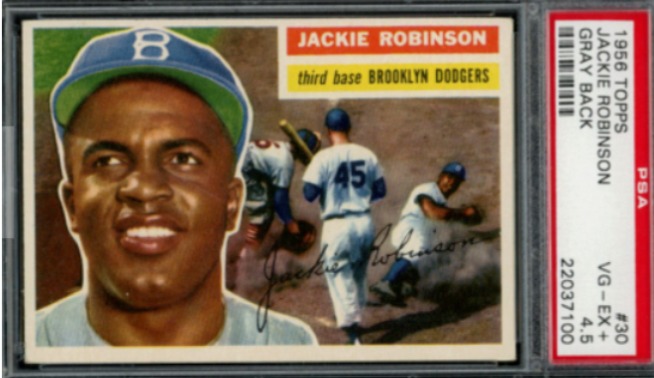 This card is the last card of this player in Topps sets. He’ll be forever remembered by many baseball lovers and will go down in history as the first African American player to play in MLB.

Once, again, it’s the famous Robinson smile on the card, while the background here is a little bit different. The background features an action scene with Robinson in the middle of it, showing him sliding into home plate.

It might not be the most expensive Robinson card, but it will stay in the hearts of thousands of collectors due to its significance when it comes to Robinson’s career. 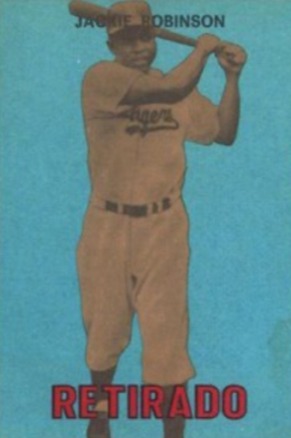 Most likely, you won’t be able to find this card anywhere out there. But it’s still worth a mention as it was a card that was available for the Venezuelan market, and it featured Spanish text on it. You won’t be able to get it, but it’s good to know that there’s one interesting variety of this card that only a lucky few are able to own.