Dwyane Wade was one of the most iconic players of his era. I know fans of a certain age will just remember his as LeBron’s Miami teammate… That is selling the man short. Dwyane Wade was arguably just as good as LeBron when they teamed up (in the eyes on some).

In this article, we’ll look at Dwyane Wade rookie cards that you can add to your collection.

Here are the best Dwyane Wade rookie cards from his 2003 draft year. 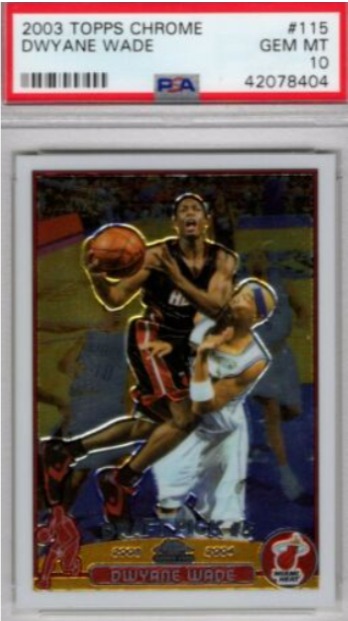 The Topps Chrome Dwyane Wade rookie card is one of the most valuable rookie cards of this player. It’s from the 2003 Topps Chrome set and it’s still widely available today, although it might be a bit tough to find this particular card in GEM MT condition like the above example.

A card like that can cost several thousand dollars. The look of this card is very image-focused. It takes up almost the entirety of the card, barring a thin white border around it. In the photo, you’ll find Wade in his typical bold move towards the basket in a game against Orlando Magic.

On the bottom of the card, you’ll find the player’s name, the season the card’s from (2003-2004), and a sign “draft pick #5”, as well as his team’s logo. It’s a nice, elegant card although there might be surface issues with many of these, so make sure you check for that.

If you’re ready to shell out a bit more, then you can go for the refractor version of this card. Here’s how it looks: 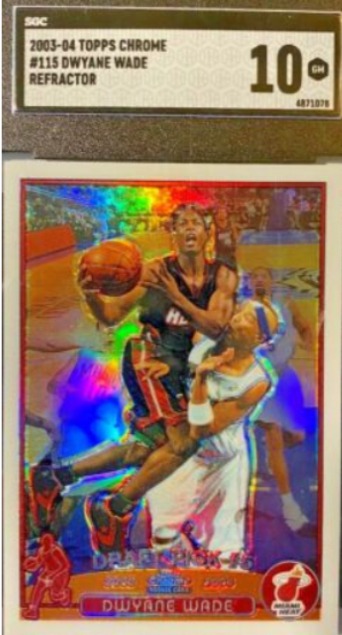 A bit more fancy, isn’t it? But the shine also comes with its price tag. The refractor version of this card can cost you at least twice as much as the base card, if not more than that. Of course, a PSA10 can be even more expensive than this particular card above in the image.

Get it if you’re ready to spend a decent chunk of money. 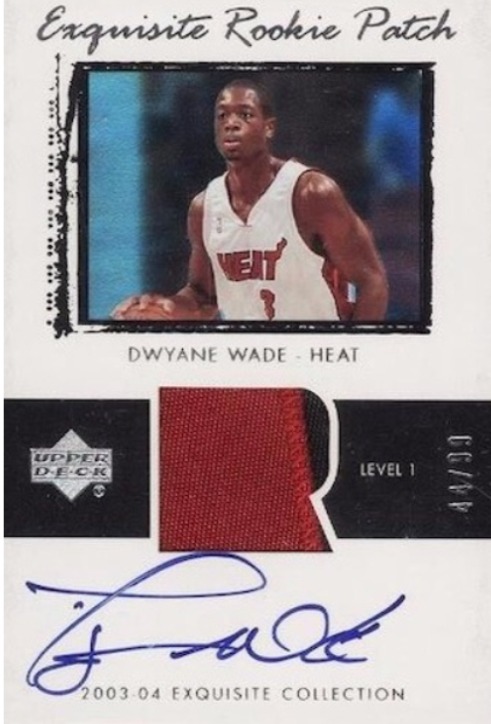 There’s a lot to love about the 2003-04 Upper Deck Exquisite Dwyane Wade rookie card. It’s a great mixture of elegance, style, and versatility. In our opinion, it’s the best-looking Wade rookie card, and that’s why it’s also one of the most highly regarded cards of this player.

In the top section of the card, you’ll find a square image of Dwyane Wade in a Miami Heat jersey. Below the image, there’s his name and his team. If we move down further, you’ll find a nice patch of his jersey right in the middle of the card, surrounded by a nice black border.

Of course, the card would not be complete without the autograph on the bottom of the card. And if that’s not enough, there’s even a serial number of the card on the right side, with each number getting its serial number out of 99.

It’s a complete package, this one, but it also comes at a steep price. Not only are these rare as hell, but they’re also expensive. You might not find it in an online auction at all. With only 99 copies, it’s scarce. Though, if you can afford to get it, do not hesitate! 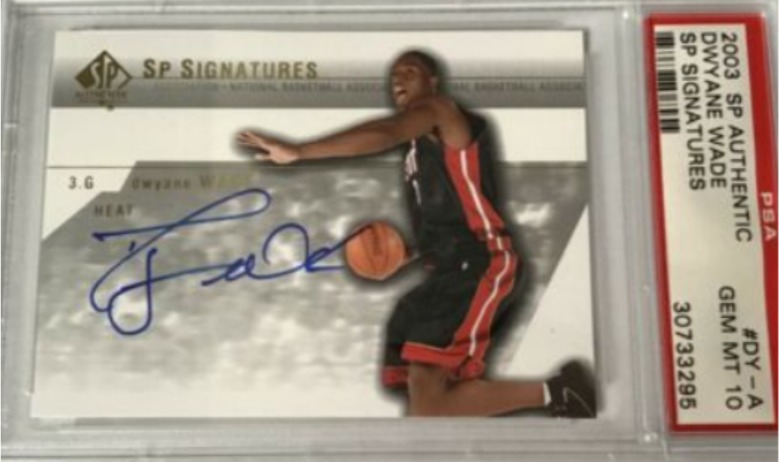 The SP Signatures Wade card is another for premium collectors. It’s not quite as expensive as the Upper Deck Exquisite, though. It has a vertical design, which some might find unusual.

The main focus of the card is on the autograph of Wade smacked right in the middle of the card. Next to it, you’ll also find an image of Wade starting a dunk, all on a grey-white background.

It’s a bit unique in terms of looks, but it’s also rare. Just 50 were printed back in 2003, so finding one might be a bit of a challenge. The SP Signatures brand is also not that common in the card-collecting world, so you’re looking at a relatively expensive card here. 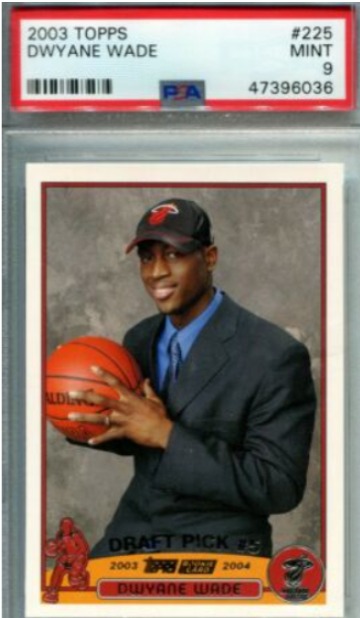 Compared to what we’ve looked at so far, this one is on the other side of the spectrum. The 2003 Topps Dwyane Wade card is one of the most widely available cards, even today. This makes it a great option for those on a budget, looking to get some fame of Wade.

Now, the design of the card might not be everyone’s cup of tea. If you prefer a more action-based card, then it’s not for you. But this sort of card design is typical for many basketball sets, especially for rookie cards. So if you like the look of Wade in a tie and suit, then you can get this one.

Yes, it is a bit basic, but if you just want to take a plunge into the market and explore the waters, then this is a great way to get started. 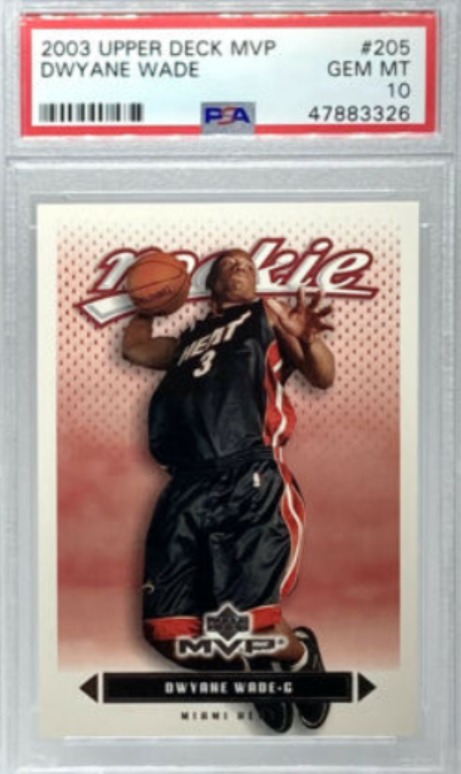 The 2003 Upper Deck MVP Wade card is another great card for those who are on a budget. Originally, this card was a part of the 2003 MVP set that consisted of 230 cards – 200 of them were veteran cards, and 30 of them were rookie cards. Wade’s card obviously falls into the latter category.

This base card features a red-ish background with white borders and the photo of Wade right in the middle of the card. Towards the bottom, you’ll also see the sign MVP and Wade’s name, position, and his team.

The card is widely available even today, so it should not be a big problem to get one, even in GEM MT condition, for a modest price.

If you’re a more casual collector, then the base version might suffice. But if you’re a bit pickier and you want the rarest of cards, then you can go for one of the parallels. The gold version has 100 cards printed, and it has its typical gold foil. The silver variant was inserted at the rate of 1 in 24, while the black one at the rate of 1 in 25. 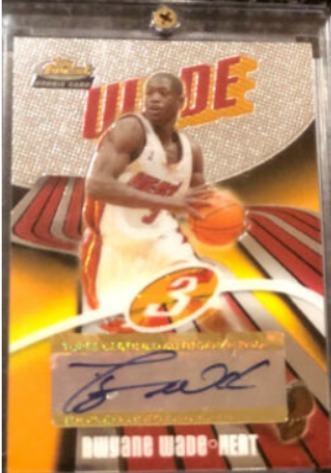 The Topps Finest Wade rookie card is still easily found on the marketplace, although you might find that there are many unrated and ungraded cards, so you’ll have to be careful with this one. It’s a mid-tier Wade rookie card with quite a lot of potential for ROI if you manage to make the right choice.

It’s one of the more vividly colorful rookie cards of this player. It features a yellow-red background with an image of Wade in action. Below the image, there’s a sticker with the autograph, which some might find odd, although it fits nicely with the overall design.

Compared to the Topps rookie card where Wade is in his suit, this one’s much more complex and developed. If you love the design and you have the bucks to spend, then look for one of the many bargains you will find online, although be wary of ungraded cards because they might have some flaws about them. Make sure you check them first. 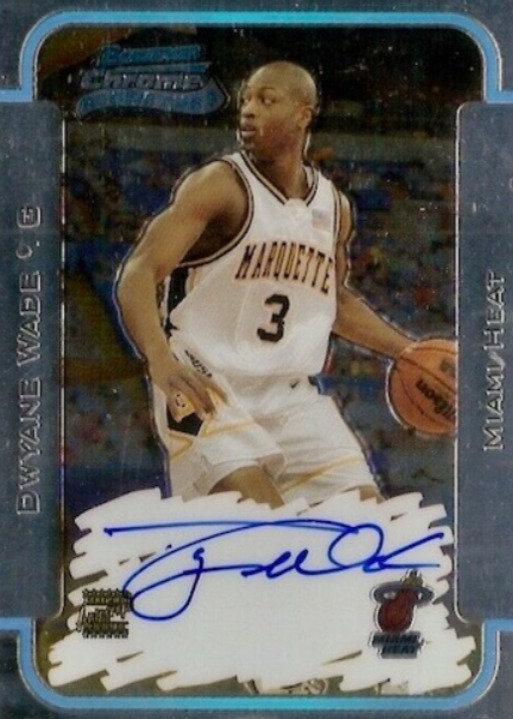 Last but not least, let’s take a look at the Bowman Chrome Wade card. This card is a bit different – the design might not be everyone’s cup of tea, though. The main distinguishing feature is the image. In it, Dwyane Wade leads his university team Marquette Golden Eagles, where he announced himself as the next big thing in American basketball.

However, there are some concerns about the design. It might look a bit too dated for some, while the autograph area is whited out so that it appears as though it’s been scratched. But that’s what gives it character, making it a unique proposition among Wade rookie cards.

It wouldn’t have been so expensive if it wasn’t so rare. There’s also a very popular parallel of this card, called the Xfractor – that one is even rarer and also more expensive. You’re looking at a five-figure sum for that parallel, although the base card can cost several thousand dollars only.

What is the most expensive Dwyane Wade rookie card?

The 2003-2004 Upper Deck Exquisite Dwyane Wade rookie card is the most expensive rookie card currently on the market, followed by Topps Chrome 2003-04 and its parallels.

What was Dwyane Wade’s rookie year?

Wade’s rookie year was 2003 when he was drafted by the Miami Heat. He was pick #5 in the first round of the draft. 2003 was one of the best drafts in NBA history, and it’s also the year when players like LeBron James, Carmelo Anthony, Chris Bosh, and obviously, Dwyane Wade, were drafted.

What is the best Wade rookie card to invest in?

It depends on your preferences. If you care about a good ROI, then you can’t go wrong with one of the Topps Chrome cards or its parallels. If you care more about looks, then you have plenty of other choices, too. If you’re on a budget, then you can consider the 2003 Topps Dwyane Wade base rookie card where he is in a suit on the card, which is typical for all rookie players.