Zion Williamson has many different rookie cards to his name (it feels like a new NBA set drops every month these days!).

We’ve covered the best and most popular Zion rookie cards at the start, and we’ll add some less well-known cards towards the end. You’ll find a great variety of cards, so let’s get started. 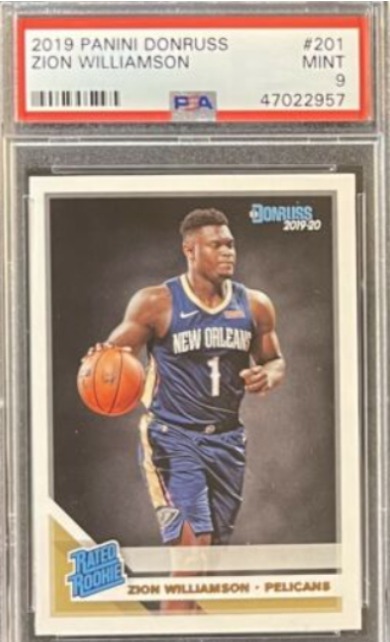 Starting off with the Donruss Rated Rookie card, this one will set you up nicely for the future. It’s one of the more basic cards you’ll find of this player, and it’s exactly what you’d expect from a Donruss card.

The price of this card will be generally lower compared to some other ones on the list. First, it’s because of one of the most widely available Zion cards out there. Secondly, it offers nothing special in particular in terms of design.

The great thing about it is that you’ll have a great variety of parallels available. You can get many great cards such as Green Holo, Green Flood, Yellow Laser, Silver Press Proof, Red Infinite, Holo Pink Laser, Black Infinite, Holo Purple Laser, Blue Infinite, and several others. 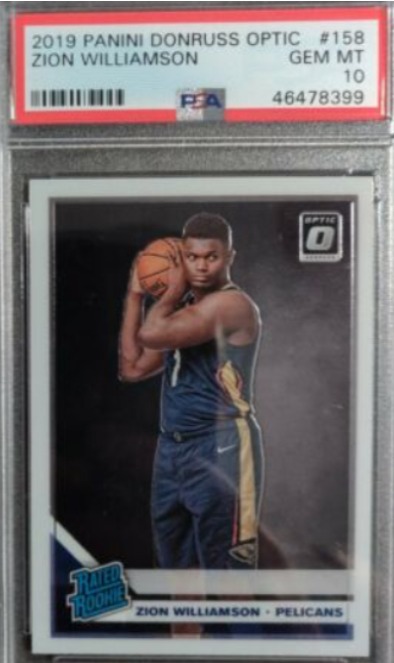 This one is quite similar to the basic Donruss Rated Rookie card above – the main difference is that this one is the Optic variation of it. It has a nice chromium finish to it, which makes it look a bit shinier than the Donruss card.

However, this one is likely to be a bit more expensive than the Donruss card. That’s mainly because it complements the Prizm card nicely, but also because it has a great assortment of parallels to choose from.

So if you’re particularly picky and you want something a bit different, you can go for one of the many parallels – some of the are rarer than others and thus far more expensive. These include parallels such as Blue, Checkerboard, Choice, Choice Dragon, Fanatics Box Set (hugely popular), Gold Wave, Green Wave, Purple, Purple Shock, and more. 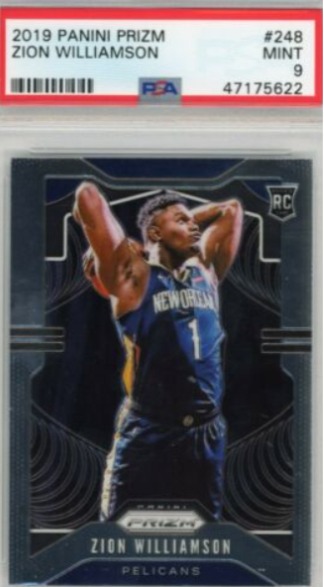 The Panini Prizm Zion Williamson rookie card is the gold standard rookie card of this player for collectors. It’s a must-have, especially if you are a big fan of the many wonderful parallels, such as Pink Ice, Blue, and more.

Again, this card is widely available, so the prices will probably not be rocket high anytime soon. However, let it stand for a few years or even decades and you’re looking for a potentially legendary card.

This card gathers a lot of interest from collectors, and will likely always be in high demand. If you can get your hands on Silver parallel or one of the rarer types of this card, then you’re almost certainly in for a good earner. 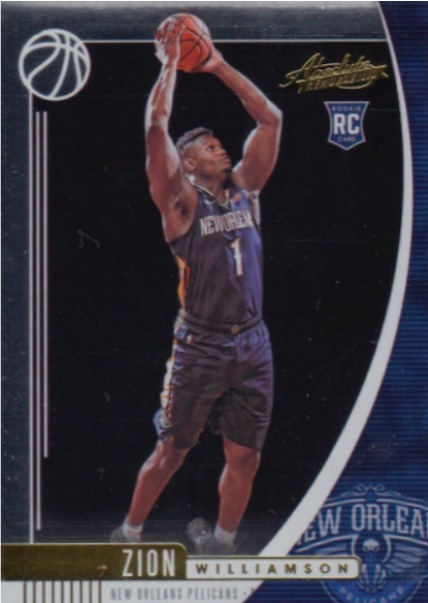 This Absolute Memorabilia foil card is a nice addition to your rookie card collection. While it’s not the most expensive card on this list, it’s certainly a nice-looking one that will probably age like fine wine.

It’s the base card of Williamson in this set, which also includes many different cards of this player, including some auto cards. This is probably the one card that many new collectors will find the most appealing because it’s affordable, beautiful, and easy to find.

There are also some parallels to be had with this one. They include the Retail version (seen above), then you have the Red, Blue, Orange, Purple, Gold, Green, and Black versions. These can be more expensive, but still affordable enough for the average collector. 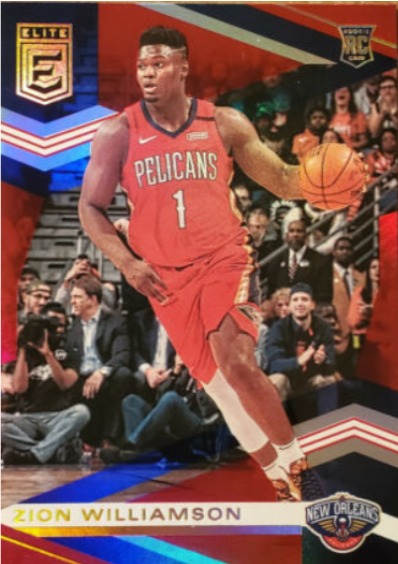 Now we’re cooking! This Donruss Elite Williamson card is much rarer than some other cards we’ve seen on this list so far. That’s because this one was only available online, so it’s a bit harder to find.

Of course, this is why it can be a bit more expensive. Nevertheless, it’s a beaut. The style of this card is very appealing, as it has a nice shine over it with red and blue colors printed all over. And the photo is equally as nice, as you’ll see a Williamson in the red Pelicans jersey, and you might even catch a glimpse of the crowd in the background.

This card, too, has some parallels. One of the most common ones is the blue parallel, which has an all-blue border around it. It’s rare, but if you can find a sensible price for it, definitely consider getting it! 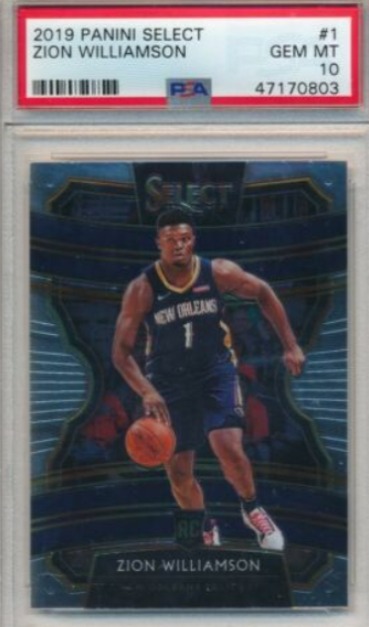 The Panini Select is one of the most widely available and printed Williamson card. The base card is a great choice for those who’re looking for a relatively cheap and accessible Williamson rookie card.

But if you’re something of a guru for rarity then you can look at some of the many parallels of this card. The most popular ones include Silver, Scope, Zebra (one of the more expensive ones), Gold, Green, White, Neon.

There are three different Williamson cards in the Panini Select set. However, only #1 is more widely accessible when compared to #199 or #297. The main difference between these cards is the photo on the card, along with some minor graphical details. 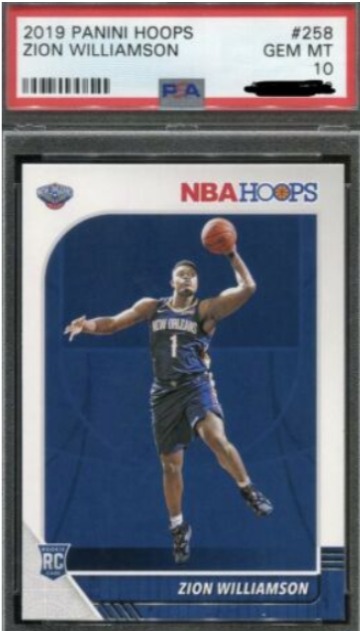 If you’re a budget-minded spender and card collector, then the NBA Hoops card will be the right one for you. It’s one of his earliest rookie cards that were widely available, plus it’s still easy to get, so you shouldn’t have to pay a premium to get it.

Yes, it’s not the most sophisticated of cards, nor is it that visually pleasing. But if you’re willing to give a retro design a chance, then you’ll like it. It has a simple but sleek design, with a white border and an image of Williamson dunking on a blue background.

If you don’t like flashy cards of today, then this one will be right up your alley. Plus, it’s affordable and easily available, so you should not have problems getting one in good condition and for good money. 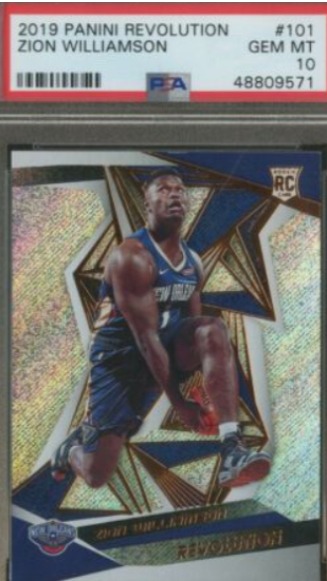 Yes, the Panini Revolution card might not be everyone’s cup of tea. It uses large shapes and lines to make up the design of the background, along with a shining area on each side of the player.

It’s a bit more flashy than some other cards on this list that have a more classical look. It’s certainly a bold design, and it looks quite modern according to some standards. It might even remind you of the bold designs of the 2000s.

Nonetheless, this is a popular card, especially for entry-level collectors. It’s easy to find and not that expensive, so it’s going to stay for years to come. And if you go for any of the many parallels, you’ll mainly see the difference in foils rather than colors. 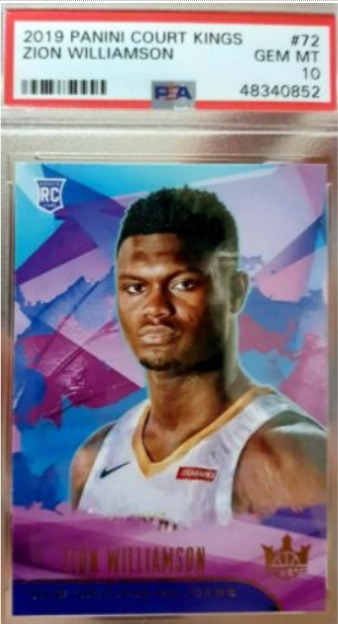 No parallels on this card? That’s a rare one. But the base version is appealing enough to make you go wild. This card is a very contrasting one compared to the Hoops one because it’s a nice blend of colors.

Blue, purple, pink, and even some white dance on this card to create this pleasing visual harmony. Inside the Court Kings set, you’ll also find two other Williamson cards, although this one is arguably the most popular one, and also the most beautiful one.

If you like this style of card with the portrait of the player on it, then go for it. You should also consider it if you’re a Williamson fan or just a casual collector of rookie cards. The price should not be through the roof, so if you can get a sensible price tag with this one, go for it. 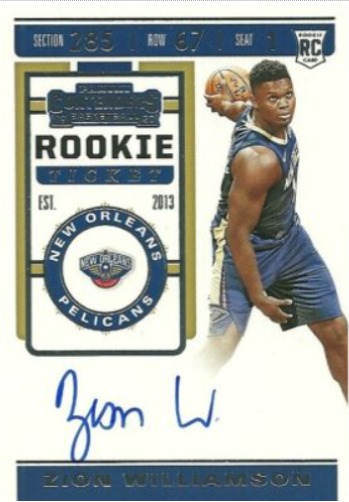 You’ll maybe recognize the Panini Contenders card from football cards – if you collect them, of course. This type of card has an autograph and a nice signature design, along with some interesting parallels, including the ticket theme.

And it’s on the rarer side, too. This card will be one of the most expensive ones you’ll find of Zion Williams. The base edition looks nice and classy, with a photo of Zion Williamson in action, the information about the ticket from his rookie game, as well as his signature.

You’ll also be able to choose from a plethora of parallels. But this means one thing – the parallels are going to cost you an arm and a leg. You can get the Premium Edition of this card, too, which is one of the most popular parallels you’ll find. 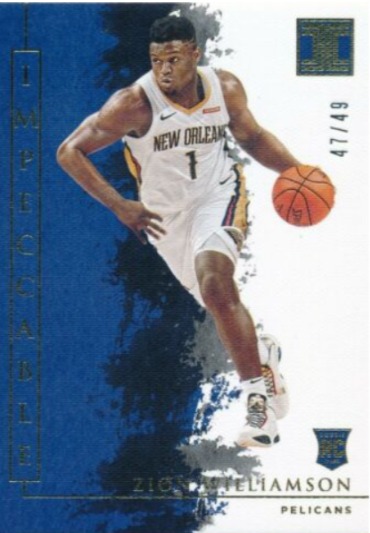 This card comes from one of the luxury sets you’ll find of Zion Williamson. Panini Impeccable sets are always highly desirable among luxury collectors. The card’s printed on canvas, so it’s a bit different than some other cards.

Only 99 cards made their way on retailed shelves, so you might have a difficult time finding one. The base rookie card does not have an autograph, although some other parallels do. The base card features a mixture of blue and white with a nice graphical layout.

It’s a classy card that’s likely to keep its value for years to come, if not increase in value. The Panini Impeccable Zion Williamson card is one of the most sought-after rookie cards of this player. 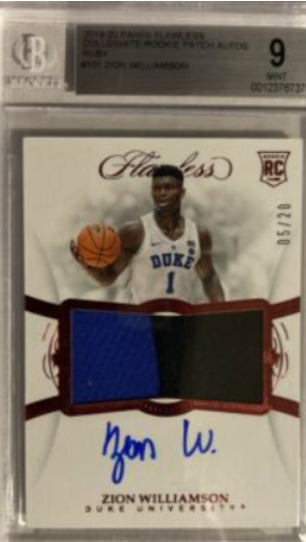 There’s a wide array of options when it comes to Panini Flawless Zion Williamson rookie cards. This particular card with the patch and auto on it is among the most popular ones. You’ll find different variations of this card, where the jersey of the player will vary, and also the patch on the card.

This means that almost every card will be unique. What makes this card so hugely valuable is the fact that the player still wears his Duke jersey.

We’re well into the premium territory with this card. The National Treasures brand is well-known for its unique design, with the autograph and the match-worn patch on the card. If you’ve got the dough and you’re looking to invest, this one’s your best bet.

These cards come only ever so rarely, and they’re quite expensive. Firstly, it’s National Treasures, so that’s exactly what you’d expect from it. If you love this sort of design, then you shouldn’t miss out on it. And secondly, it’s Zion Williamson.

If you’re looking to add to your collection, or if you’re willing to invest and get a good ROI, then you won’t do much wrong by getting this card.

Or… any from the National Treasures collection. 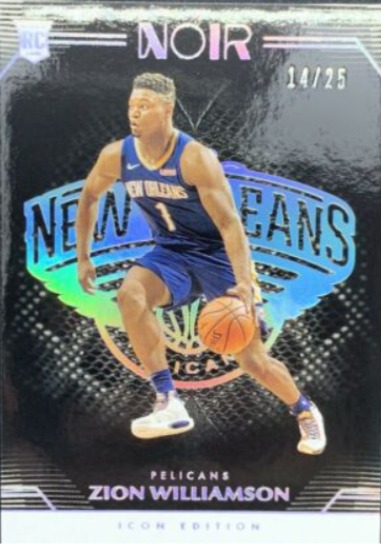 This particular card is the Holo Silver variation of the Panini Noir Williamson card. It’s a bit shinier than the base card, and there’s a bit more color to it, as well. But the main feature stays, which is the noir black background on the card.

The Holo Silver parallel is rarer than the base version. Originally, there were only 99 cards printed out for the base version, and there are significantly fewer of these. There are also two other parallels if you’re looking to add some variety – these are Holo Gold and Premium.

The rarity of these cards also commands their prices. On the aftermarket, you’ll have to spend a big chunk of money to get your hands on one of these, especially if you’re looking to buy parallels.