Trae Young was drafted in the 2018 NBA draft as a fifth pick by the Dallas Mavericks and was then traded to the Hawks in exchange for third pick Luka Doncic. The trade divided the NBA world at the time.

Today, we can look back at the 2018 draft year as a historic one. Both Young, Doncic, and Deandre Ayton lead the line in star players, with some other good NBA players in there too.

These are the best Trae Young rookie cards that you can consider. Let’s start with some more affordable cards and then move up to more expensive ones. 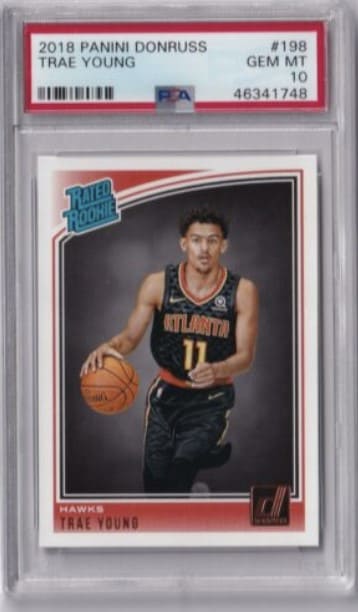 Donruss cards have always been seen as the go-to cards for budget collectors. They provide you with an excellent choice if you want something simple, relatively inexpensive, but also a card that will hold up for quite a long time.

It has a fairly neutral look and feel to it, so you can expect it to age quite well. At the same time, the value of the card is likely to rise even higher in the future.

The beauty of this card that while it seems so simple, there’s a ton of variety if you want – as you’ll be able to pick from dozens of parallels.

While we’re here, we should also mention the Donruss Optic card, which is also a popular alternative. 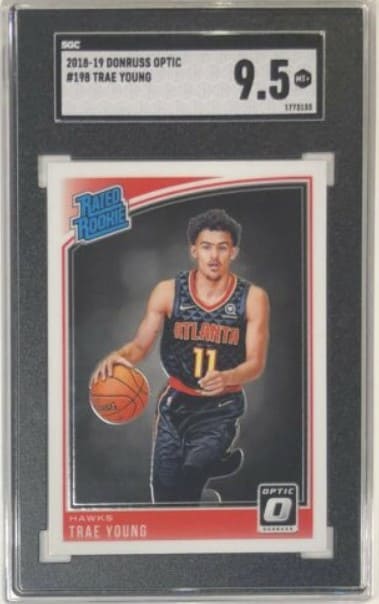 Optic cards are known for being of a slightly higher quality than base Donruss cards. They’re also a bit shinier – and who doesn’t like shiny?

As with the Donruss card, there are many parallels to choose from here as well. 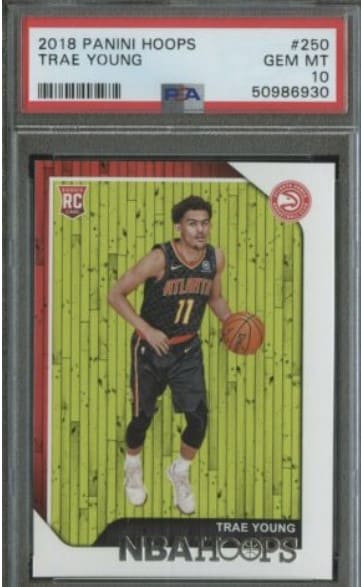 The NBA Hoops cards have always been popular for rookie card collectors. They provide collectors the accessibility that budget collectors need.

At the same time, it brings a big name from the card collecting world and makes it relatively easy to get for every type of collector.

In addition, this particular card from 2018 of Trae Young has a classic feel to it, so it seems as though it’s going to age quite well if you decide to get it.

As always, the NBA Hoops rookie card remains to be seen as one of the most popular choices for all types of collectors – but perhaps most notably, to budget-minded collectors that are looking for a solid rookie card option. 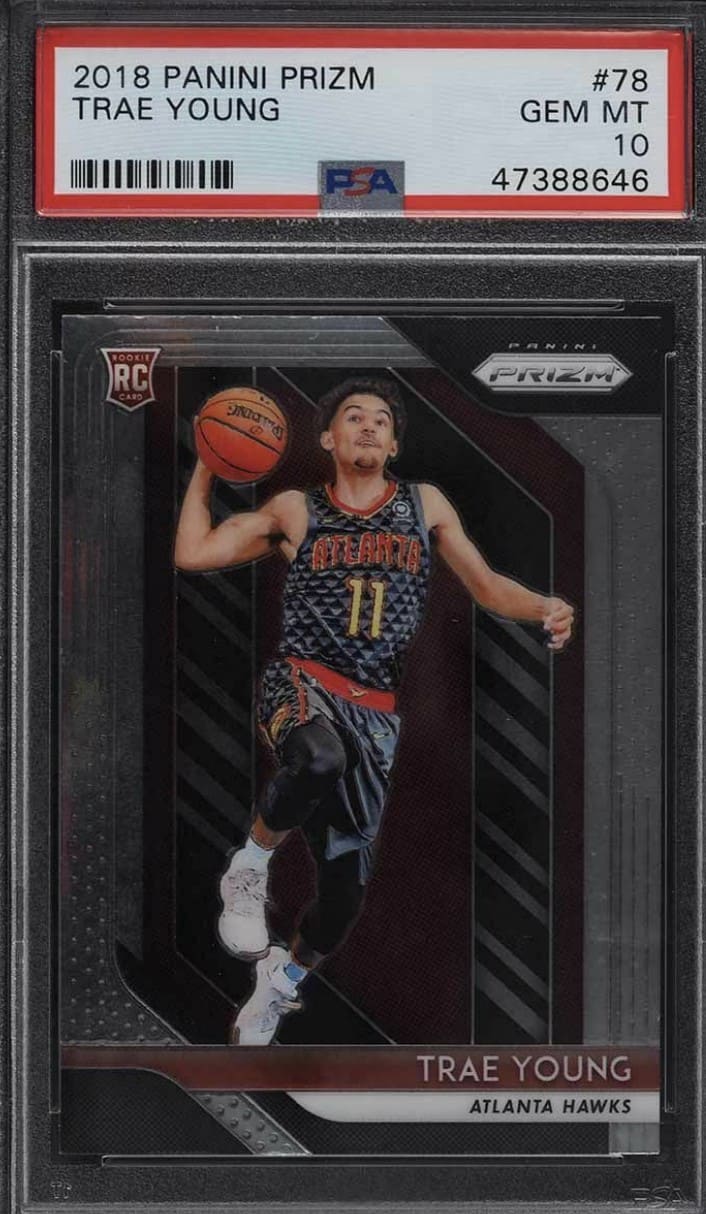 The Panini Prizm cards are considered to be flagship rookie cards for almost any player, especially in the modern card collecting years.

The base card of this type is an excellent option if you want something that won’t blow your entire budget on just one card.

But for more premium card collectors, there are still parallels to go for. These can be slightly more expensive, but they bring vivid colors and a shiny feel to the table. In addition, some of them have a very limited print run, which is something that you’d want to see if you spend a bit more on a card.

Among the most popular parallels of this card are Silver, red, purple ice, blue ice, purple, fast break pink, and the king of them all – Black. This one only has one copy to its name, along with Choice Nebula, which also has only one copy. 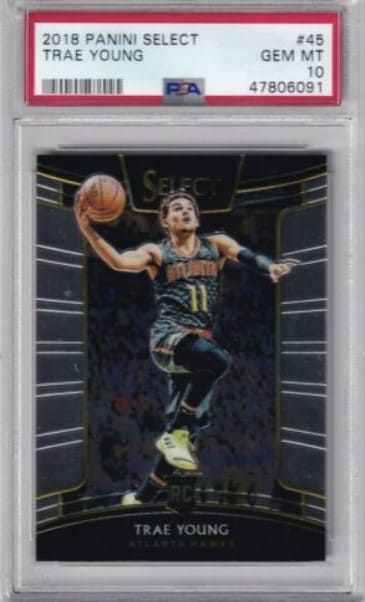 Now, the base Panini Select rookie card of Trae Young is in the same category as the Donruss base card – one of the more mainstream options to go for. At the same time, it has a slightly lower print run and is also more affordable.

There are many different variants of this card – and some of them can collect quite a lot of cash, especially the rarer alternatives.

If you want an inexpensive option, go with the base card. But if you want something rarer and more valuable, consider the more expensive parallels. 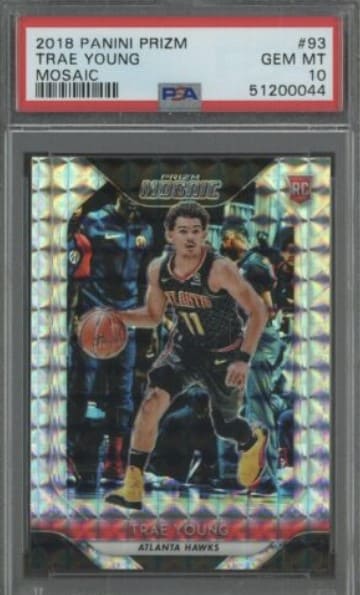 Now, while we’re on the topic of mainstream cards, the Panini Prizm Mosaic card is certainly not on that list.

This is one of the newer card lines when it comes to rookie cards, and the 2018 Mosaic card represents the start of the popularity which started to rise in 2019 and 2020.

The card has a distinct mosaic-like background that makes the card shine. It has a slightly more modern look and feel to it, so if that’s something that you don’t particularly like, then it might be better to consider alternatives.

It’s not Trae’s most popular rookie card but is among the more affordable alternatives for sure. 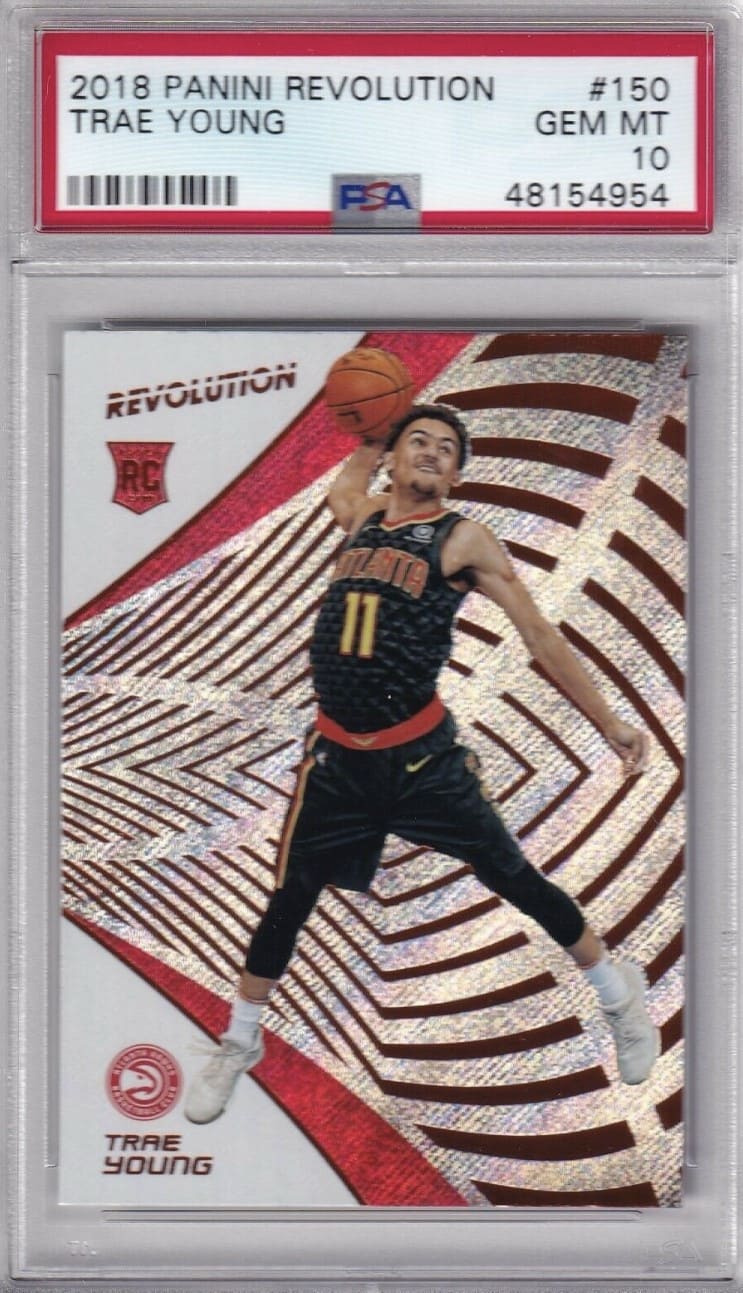 With the Panini Revolution Trae Young rookie card from 2018, we’re well into the medium-priced territory of rookie cards.

This card is known for its interesting backgrounds and somewhat experimental colors – the base card doesn’t necessarily show that, but its parallels do. Some of the most popular parallels for this card include Astro, Groove, and Impact.

If you’re after cards with impressive artworks, then the next few cards on this list are going to be right up your alley – and this Panini Revolution card starts it all.

Find this Card on eBay 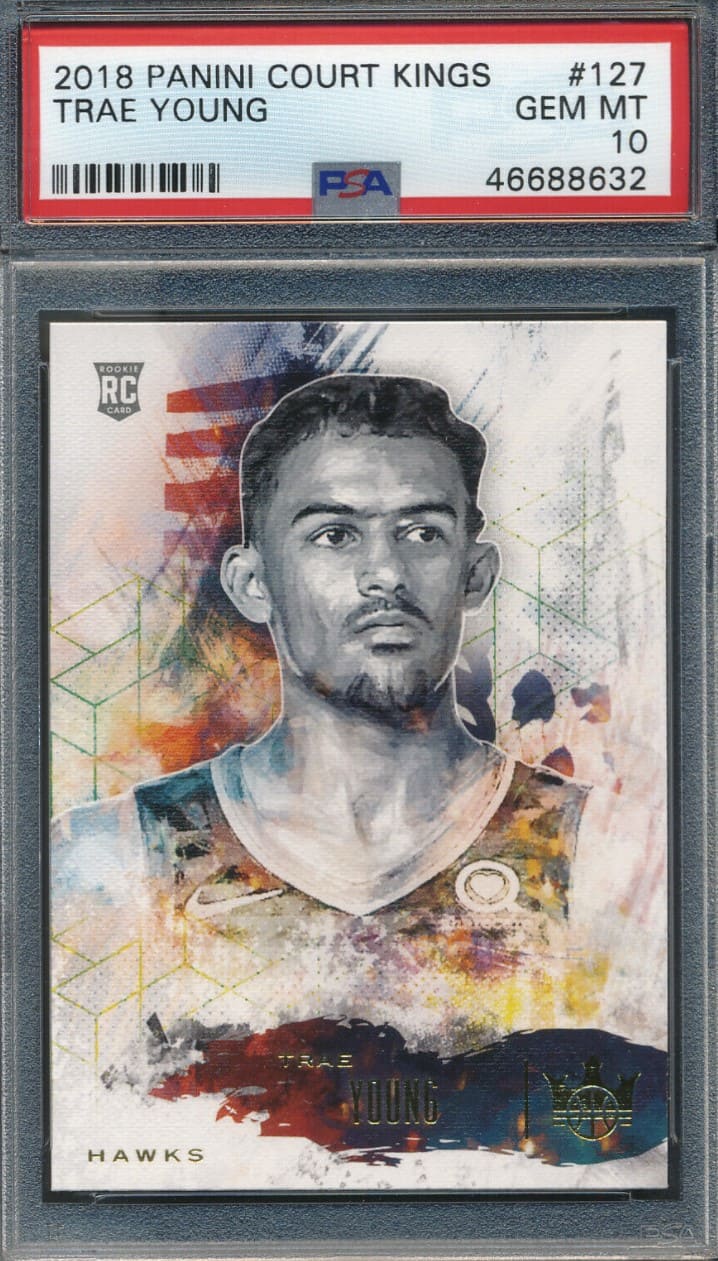 When we talk about the Court Kings cards, there are four cards that we should mention here: they’re numbered from Level I to Level IV. All these levels of cards represent a great chase for card collectors that want to complete their collections. 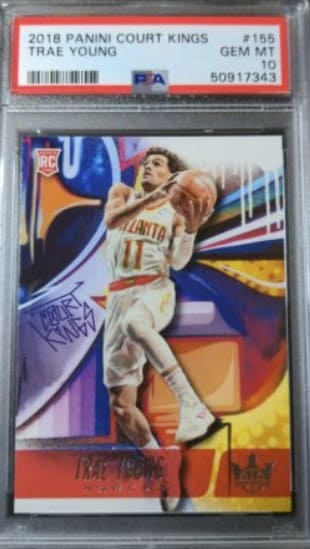 This one is the Level II card. You’ll see that each card comes with its distinct look – all of them are more artistic. 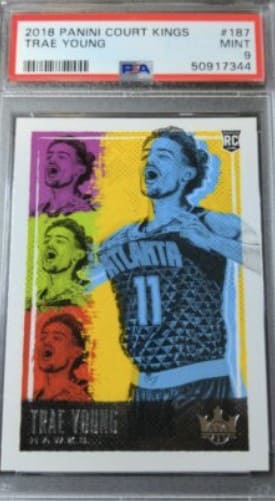 Again, the Level III card is different from the other two. It is a bit more colorful, and it features a closer portrait of Trae Young when compared to the two we’ve featured so far. 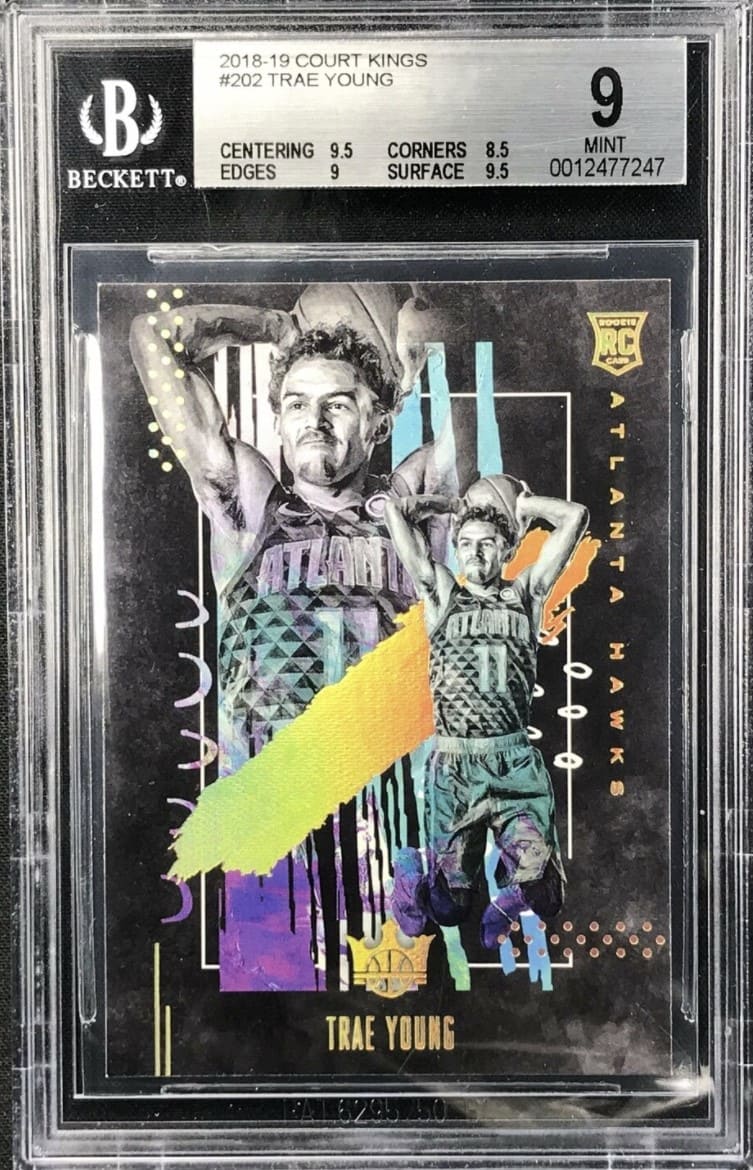 Level IV (#202) is the rarest of them all and thus, the most expensive of them all. It’s a chase card because collectors want to own it to complete their Court Kings collection of Trae Young cards.

The problem arises with the availability of this card.

It’s the rarest of all Court Kings cards, making it slightly more challenging for completists to have their collections fulfilled. 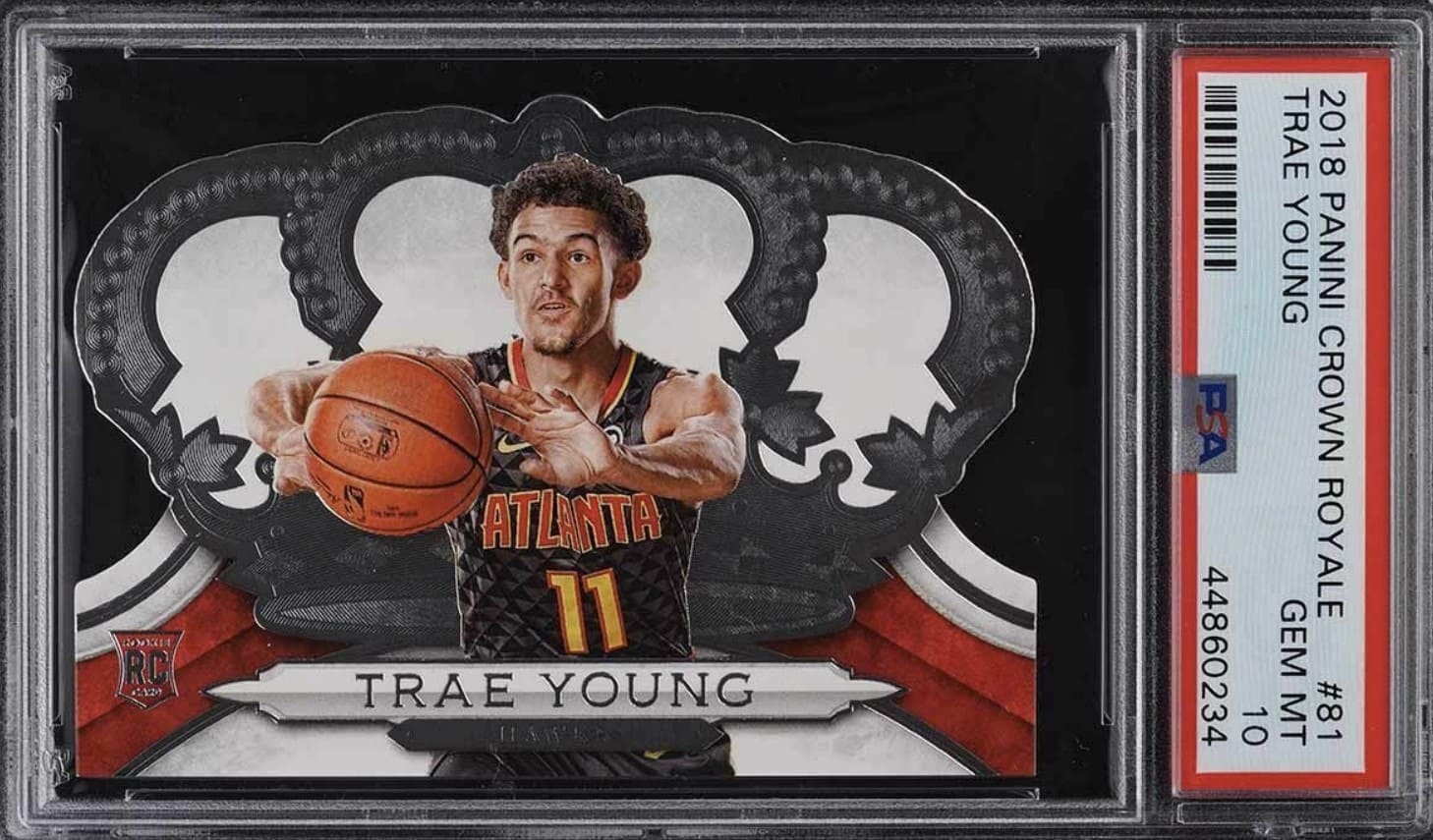 Lastly, on this list of more artistic Trae Young cards is the Crown Royale card. The base card has this distinct, crown-like pattern and of course, a portrait of Trae Young.

Now, if you’re a bit more budget-minded, then the base card should provide you with enough zip for your money.

But if you’d like something a bit more special, then you can go for one of the parallels.

Arguably the most famous one in this category is the Kaboom! card. 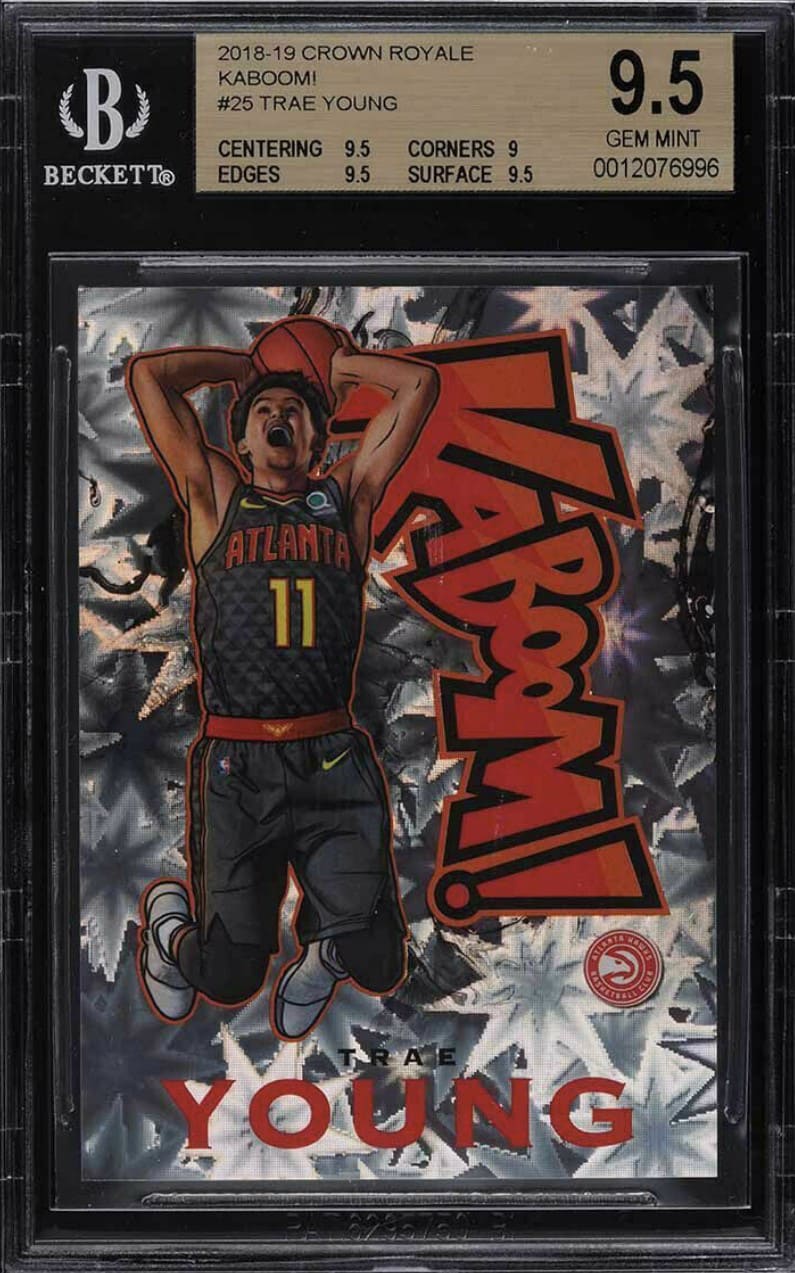 Not only is the Kaboom! card rare, but it’s also a looker. It has its distinct feel and looks, which is something that many collectors are prepared to pay a premium for – and you’ll have to pay it for this one, as well. 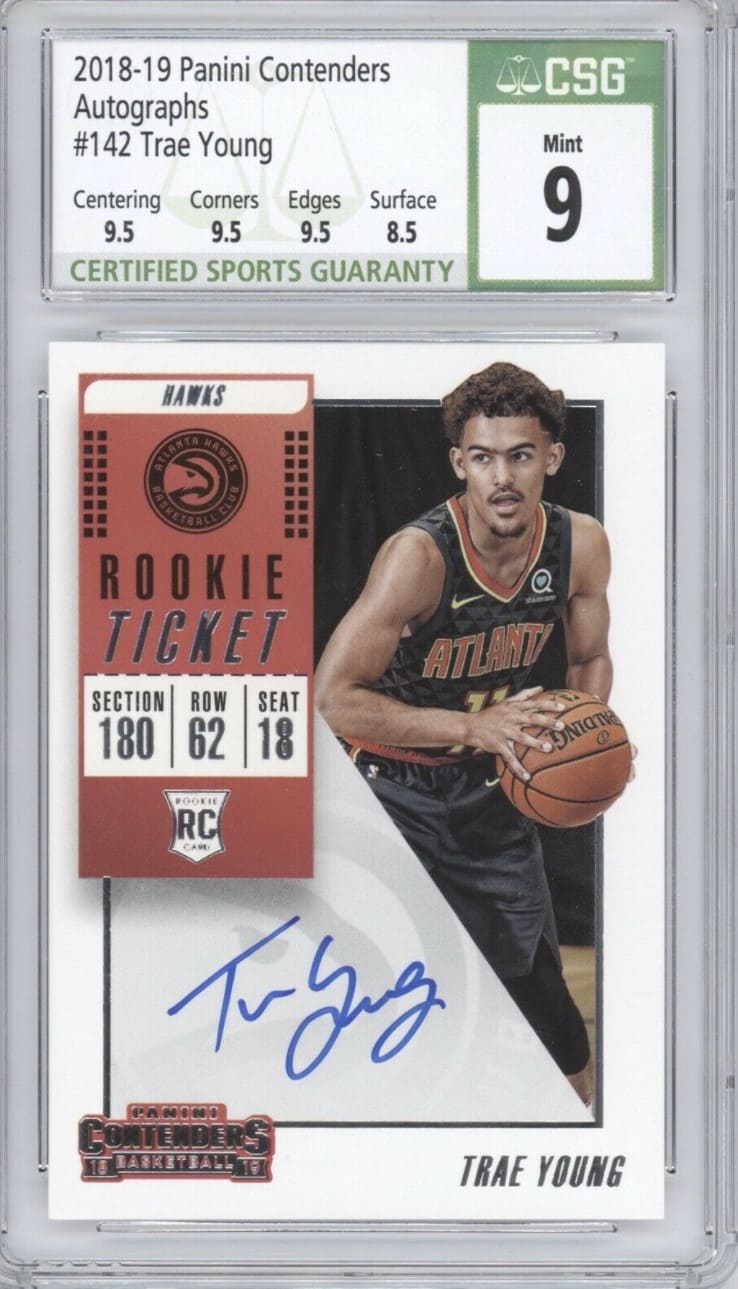 With the Panini Contenders card, we’re now into the territory of premium Trae Young rookie cards.

As you might expect from Panini Contenders, you get a ticket-style design with a card that makes it feel unique. You’ll get your unique numbers when it comes to the ticket, and there’s also an autograph on the card.

This card is still among the more affordable premium cards because it doesn’t have all the same features that some other premium options carry.

Still, it’s a beautiful card that should be on your list if you’re after something a bit more unique. 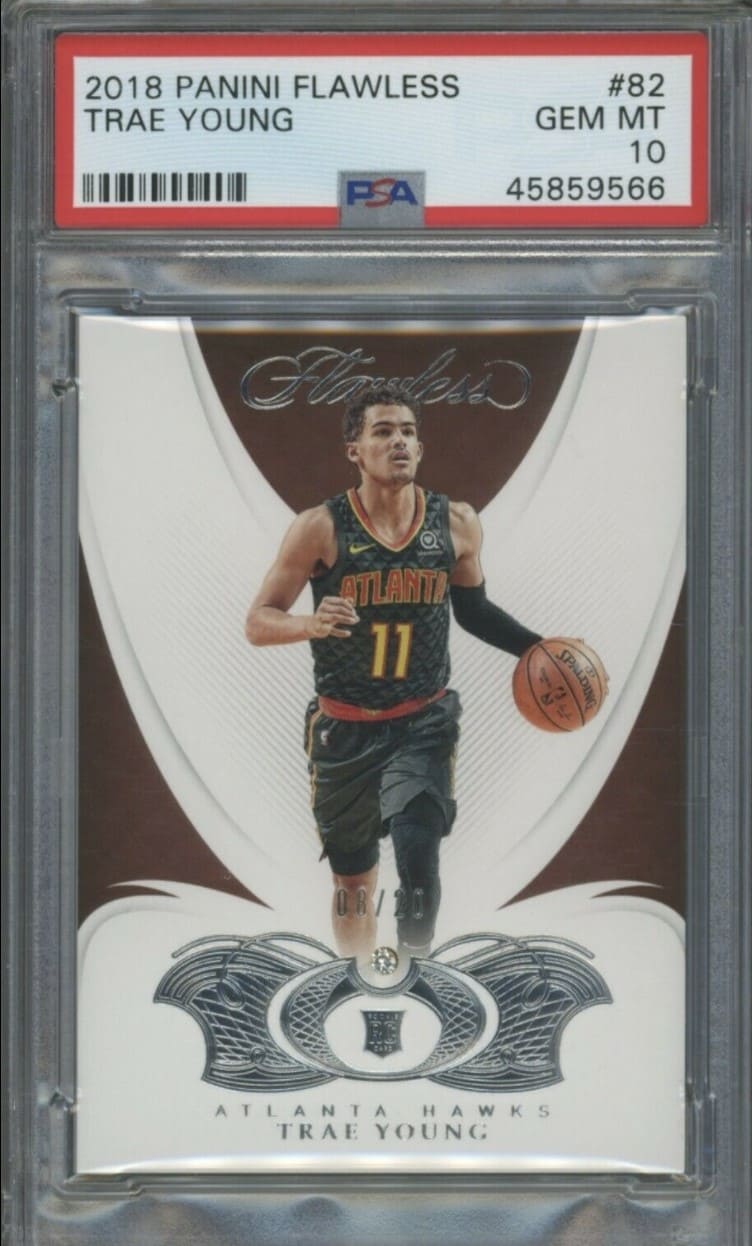 Now, this is where it gets interesting.

The Panini Flawless is one of the rarer mainstream cards that you’ll be able to collect, as it comes with a print run of only 20 cards.

As you might expect from Panini Flawless cards, it also comes with its distinct, elegant feel that will make you want to consider getting this card.

It doesn’t have an autograph like some other premium options – but if you’re after an autographed card, then you might want to consider other cards.

It’s still a breathtaking card that’s worth your time and money, especially if you can get your hands on one of these relatively early when they’re still not as expensive as they might be in the future. 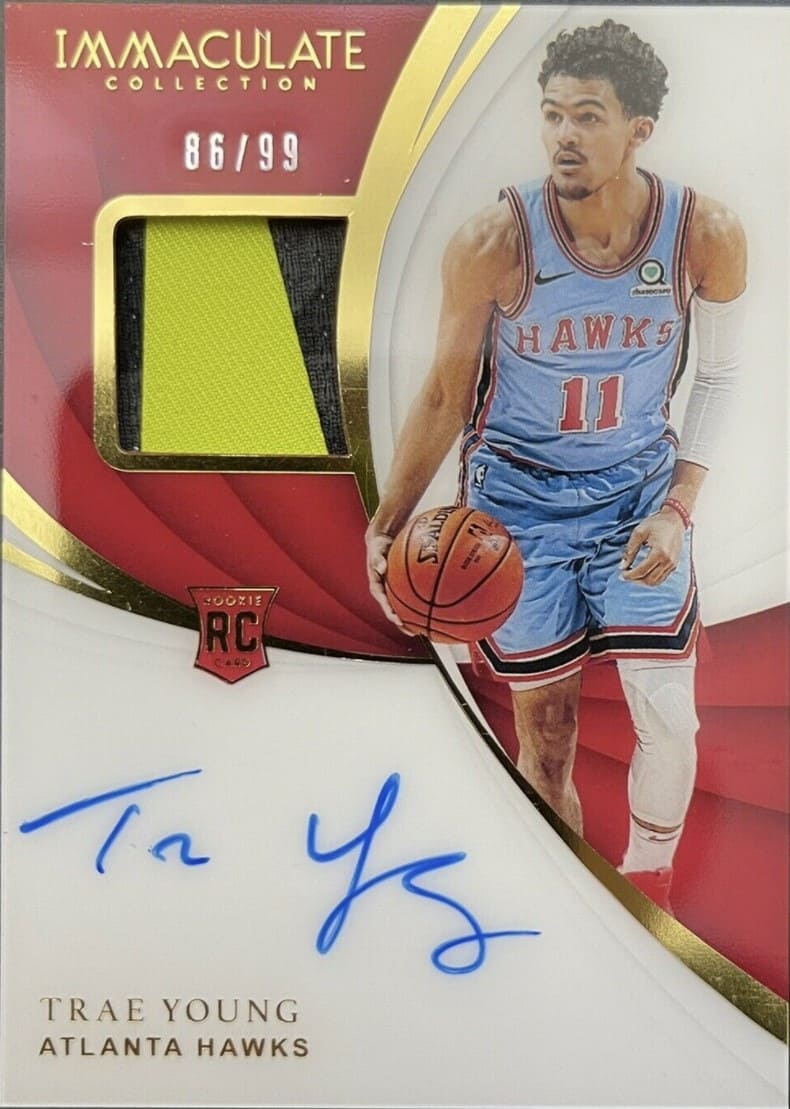 If you decide to go with the Immaculate Collection card, then you’re getting everything you’d expect from a true premium card: the autograph, the jersey patch, and a limited print run of only 99 cards.

To top it all off, this card also has some nice parallels to choose from, so if you want something extra rare, then you can consider those parallels.

But if you prefer something rare, then the base card will also be a great option for you.

Just know that this card won’t come cheaply – you’re looking at several thousand dollars at the least – and potentially even more for the parallels. 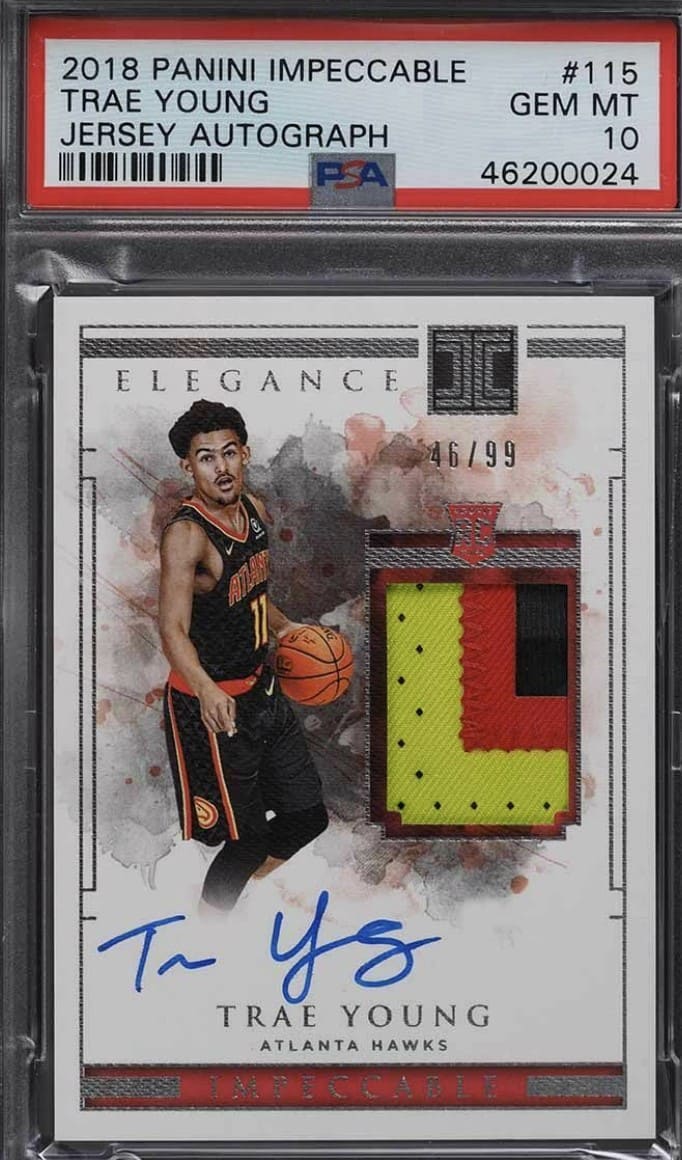 The Panini Impeccable card has similar things on offer as compared to the Immaculate Collection card – it also has a limited print run of 99, an autograph, and a jersey patch.

If you have several thousand to spend and you want something more premium-feeling, then this card might be the right option for you. 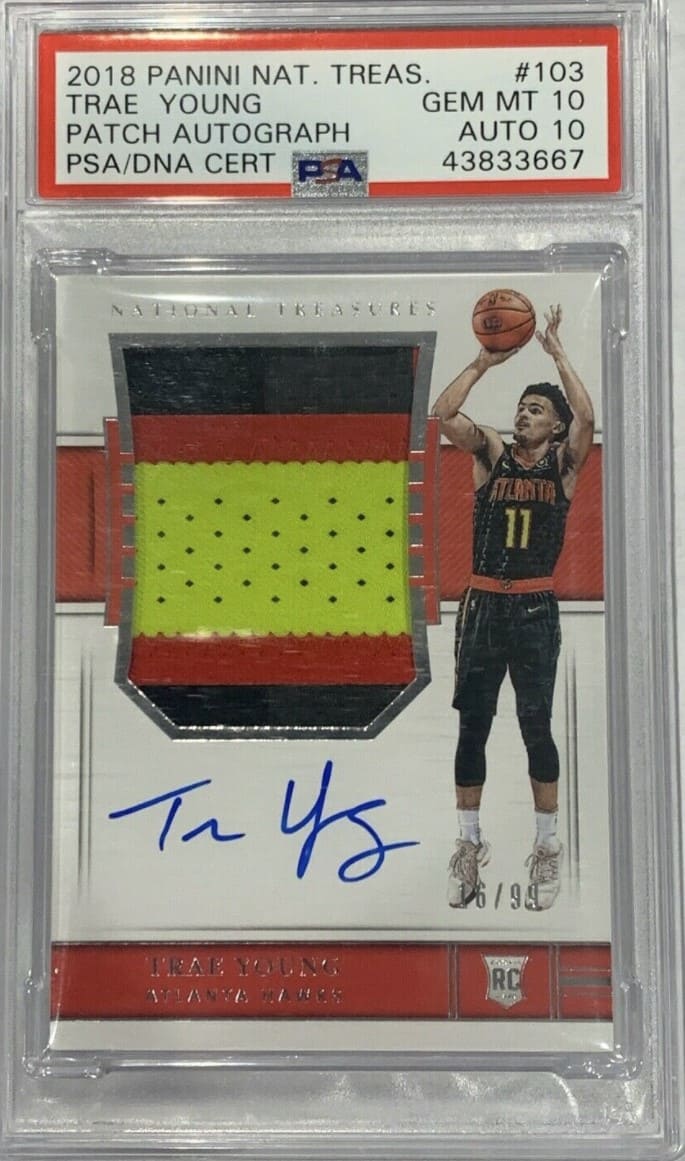 The 2018 Trae Young National Treasures card is like the cherry on the top of the cake. It’s the pinnacle of premium cards, which is reflected in its value.

You’ll see prices for these cards vary wildly across the board, and it will depend on the condition of the card. There are also vertical or horizontal options, so you’ll be able to pick whichever suits you best.

But the fact is that the prices will go well into five figures and potentially even into six figures for the best possible rated cards like this one.

If you don’t have that sort of money, you can only feast your eyes on the beauty of this card from your screen, but if you do have the money… Then the card is an excellent card to own, but also a great investment if you’re after that.

The answer to this question will depend on your preferences and your budget.

If you’re ready to spend several thousand dollars, then look for the premium options. If you only have a few hundred or even less, then start with the cards near the top of the list and check out the offerings.

There are also other factors to consider, such as your preferences when it comes to the looks of the card.

Want something that looks more classic and you don’t have the big bucks? Go with the base cards of Donruss or Panini Prizm.

The choice is there – and Trae Young’s cards are one of the best cards to own at the minute. You just need to know what you’re looking for first before buying.