The selection for Luka Doncic rookie cards is pretty wide. Most of them are from 2018/2019 in his first NBA season, although you’ll also find some from his early days with Real Madrid. 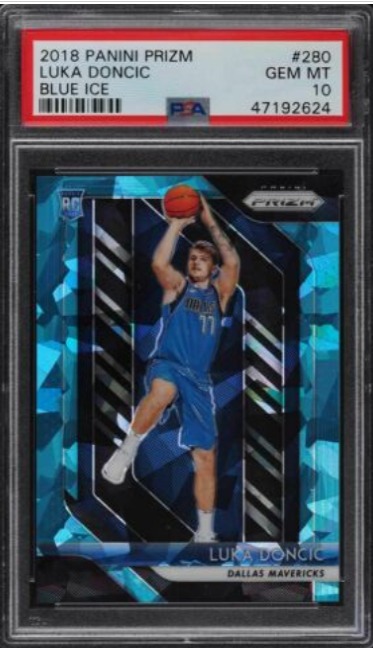 This is the rookie card to own when it comes to Luka cards. The base card is not that rare, but if you manage to get your hands on one of the rarer parallels, you’re a lucky man. Prizm cards are among the most popular NBA cards, and the base card has its typical chromium design that you’d expect.

It’s the go-to Luka Doncic rookie card for many collectors, although it faces strong competition from the likes of Donruss, Upper Deck, or even Topps. The Prizm card can be found in a wide variety of packs and configurations.

Or, you can just go with any of the Luka Prizm cards from his rookie year – they’re all good. 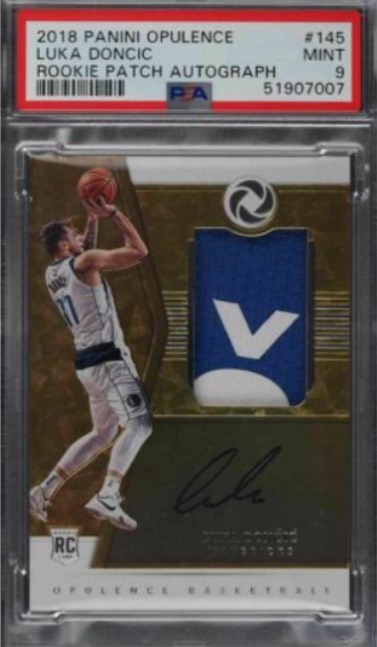 The 2018 Panini Opulence is considered a luxury option when it comes to Luka Doncic rookie cards. It’s one of the most complete cards you’ll find on the market, although they’re much rarer than Panini Prizm cards.

This card is a stunner. It has a Holo Gold finish, making it feel like it’s reserved only for the lucky few. It also has everything that you’d come to expect from a card of a player like Doncic. You’ll find his auto and a match-worn patch of his jersey. All this makes this card a highly valuable one.

Pair that with the fact that there are only around 10 cards of this type out there, and you’ve got a winning combination for making a profit. You won’t get it cheaply, though – it’s probably among the most valuable Luka Doncic rookie card on this list. 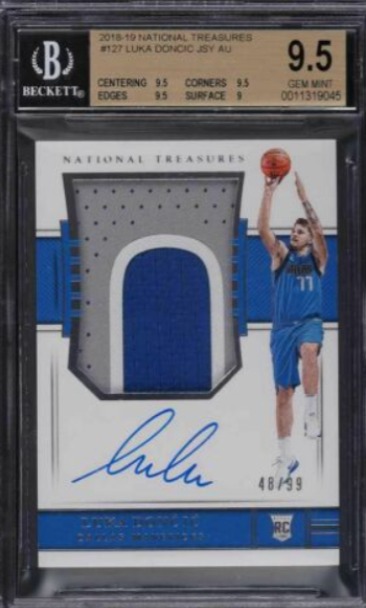 National Treasures cards are almost always expensive. They’re considered the premium option when it comes to cards. And this Doncic rookie card is no exception. If it’s kept well and in great condition, then it might cost even more than the Panini Opulence card.

What makes it so special? First, the design. The white background fits so nicely with the blue jersey of the Mavs. Then you’ve got Luka’s autograph and of course, a patch of his match-worn jersey. Those are all hallmarks of premium cards.

Not everyone is going to be able to afford this one, though. If you’re only after high-priced items, then this one will be right up your alley – the horizontal NT card only has 49 copies though, so you’ll have to hurry if you do find one you like! 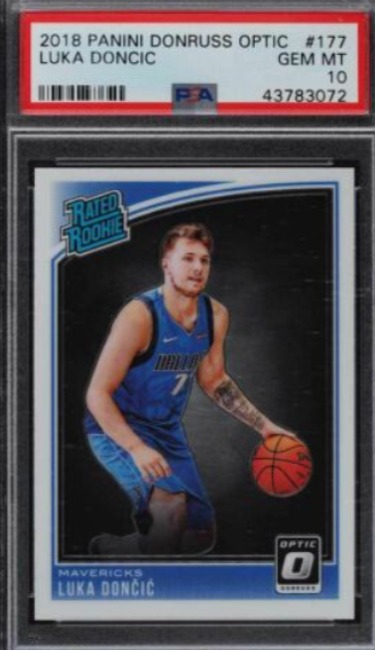 Moving away from the premium cards, we’ve got the Panini Donruss Optic Doncic rookie card. This card is widely available, especially when we compare it to the previous two options. This particular card in the image is the base card, although you’ve got so many parallels to choose from.

If you’re a casual collector and you want an entry-level Luka Doncic rookie card, then you should take a close look at this one. It still has a lot of value, although not nearly as much as the National Treasures one, for instance.

However, if you want to go for something rarer, then you can look at some of the parallels of this card. You’re spoilt for choice here – although some parallels might cost you a significant chunk of money. Some of the most common parallels include Holo, Blue Velocity, Purple, Shock, Lime Green, Red, Hyper Pink, Blue, Black Velocity, and several others. 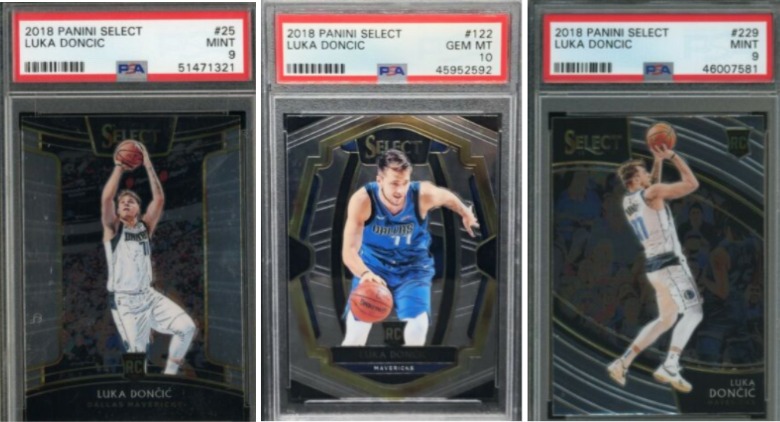 The Panini Select Luka Doncic rookie cards have three variations: #25, #122, and #229. If you’re after a challenge, then you can try and find all three of them and add them to your collection. Alternatively, all of these cards represent a good ROI if you manage to get them in decent condition.

What is more, each card has many parallels to choose from. So if you’re really picky and you want the rarer options, you can consider those. Otherwise, it really depends on your taste when it comes to design.

Each card has something unique about it. The #25 and #229 have Doncic in his shooting positions, while the #122 features Doncic in his dribbling action. However, only the #122 has Doncic in the famous blue jersey of the Mavs, which is the default home kit of this team. It’s only a minor detail, although it can be important to some collectors. 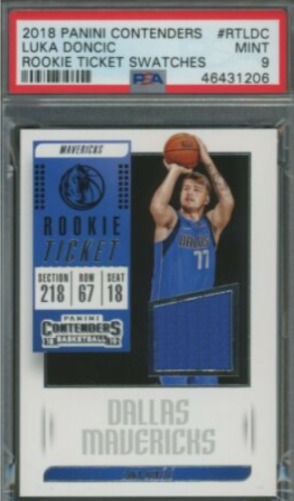 This 2018 Panini Contenders ticket is a must-have for Doncic lovers, but also for rookie card collectors. This base card is a great one, although if you’re able to find a cracked ice variation of it, you can consider yourself lucky.

The card looks beautiful, and it’s a ticket from his actual rookie game. The base card itself already looks nice, although some other parallels look even better, perhaps. You’ll also find a patch of his jersey on the card, although some other variations also have his autograph, making them even more valuable. 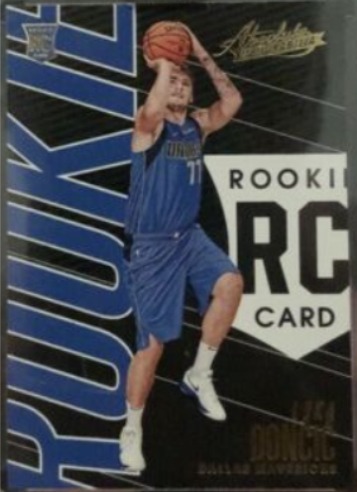 The 2018-19 Absolute Memorabilia cards are tough to find. They were originally packaged in cases, which should keep them in impeccable condition for longer. Each pack contained only one card, so you will probably have a hard time finding this card, even in the future.

Even if you go for boxes, you’ll only collect two cards at a time, which decreases your chances of finding this card. Alternatively, you can always look to resale sites like eBay, although they’re as rare as a polar bear in a desert (this specific card, at least).

The card has two parallels: 10th Anniversary, and Maroon. 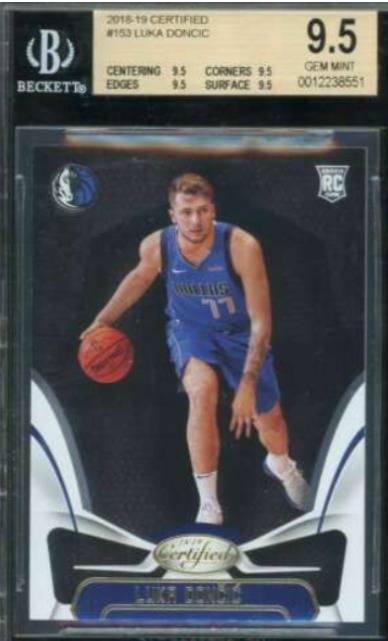 The Certified Doncic rookie card closely resembles Totally Certified cards of the previous years – and that’s because the design of the card is largely intact. The main difference between the two is the foil finish, which is a bit different on this card.

This card is perhaps a great option for those who are on a budget. Compared to some other Luka Doncic cards, this one is actually significantly less expensive. There are some nice parallels to choose from, too, if you are looking for something extraordinary. 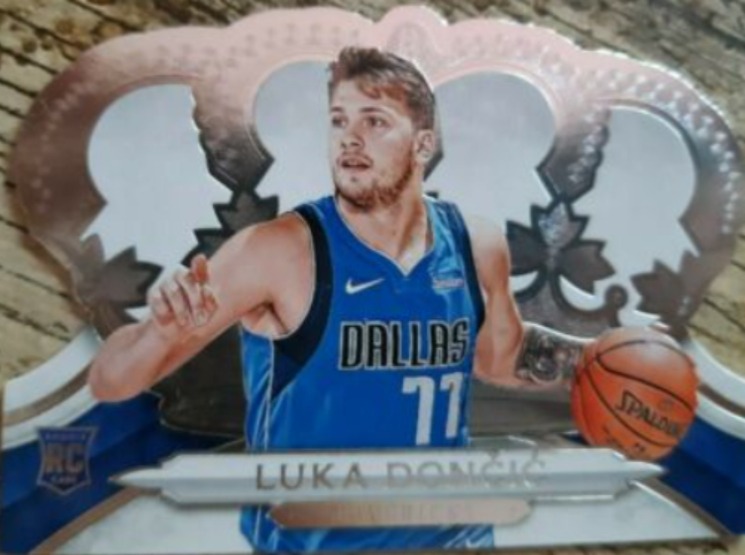 The main distinguishing feature of the Crown Royale Luka Doncic rookie card is its shape. It has a crown-like shape at the top, which broadens slightly on the bottom of the card. On the card, there’s a Luka Doncic organizing a Mavericks attack and his name beneath the image.

This type of design is typical of almost all Crown Royale cards, especially since the 1990s. There are some interesting variations of this card, too. The color of the crown can change from parallel to parallel, although the image is also different on some variations.

Crystal is the main variation, and there are also many sub-variants of the Crystal one. There’s Crystal red, and Crystal purple, as well as gold and platinum. The price will depend mostly on the variation of the card, as well as its condition. 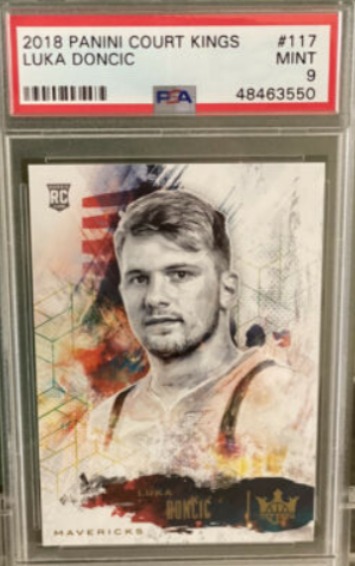 Inside the 2018 Court Kings set, you’ll find a couple of different Luka Doncic cards. The #117 and the #145 are by far the most commonly available. The main distinguishing feature of the Court Kings cards is their artistic design – although these two are very different.

If you want something a bit more artsy and colorful, then you should go for these cards. The #145 card is even more colorful than the #117, although some might fancy the black-and-white color scheme of the first one.

Regardless of which variation you like more, these two cards will stay among the most popular Luka Doncic rookie cards for many years to come. 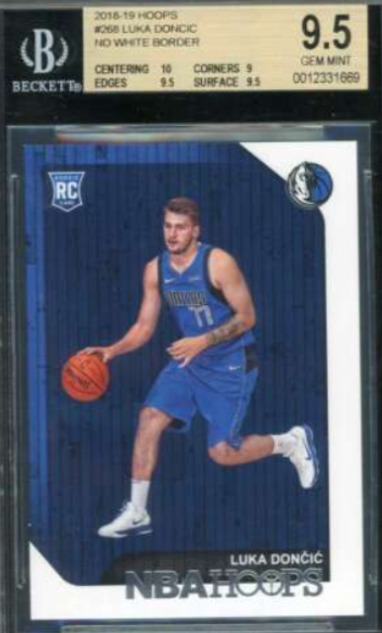 Compared to the Court Kings cards, this one is a bit more casual and relaxed. The art style of this card is much more basic and elementary, although that’s what makes it feel like a classic card.

This card is widely available, so you won’t have to pay a fortune to get it. It’s more of a traditional card, so if you prefer something a bit more classy, then you should go for this one. Also, it should remain a moderately-priced Doncic card compared to some other options, no matter how his career develops. 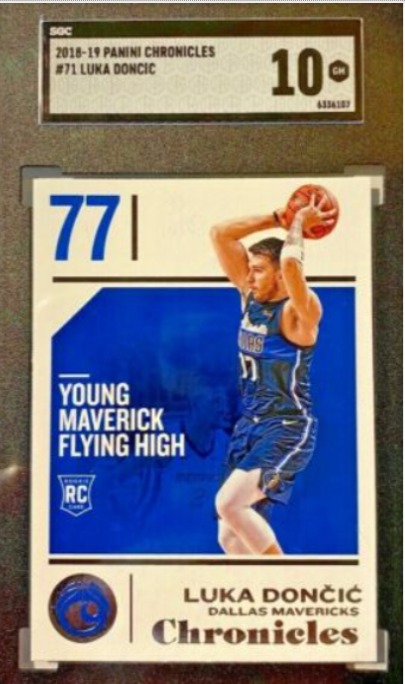 The Panini Chronicles cards take a different approach than some other types of cards. It’s more of a magazine-style card rather than the classic cards you’ll see nowadays. This includes the title on the card which ready “young Maverick flying high”.

It’s slightly different than most other cards on the list, but also the least valuable one. If you’re looking for a good entry-level card that looks nice, then you can go for it. Although you probably won’t be able to get a high ROI on it – it’s one for collectors rather than for making a profit. 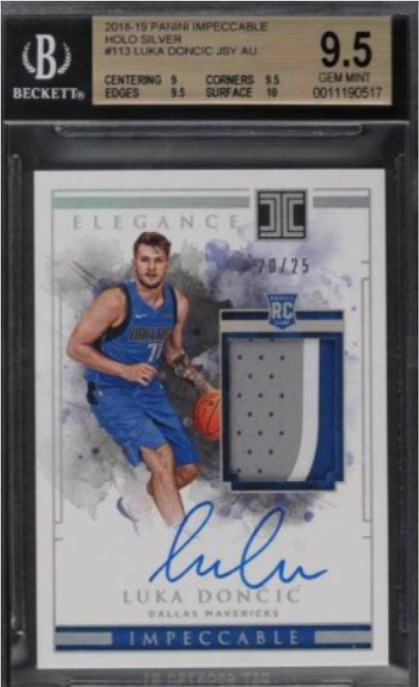 If you’re a high-end collector, then you should be looking at this particular card. The card itself is eye candy, with an attractive and elegant design that has Doncic looking for a teammate with the ball in his hands.

Additionally, it has a patch of his match-worn kit and his auto. It’s one of the best-looking Doncic rookie cards, that’s for certain. Although this also means that the price will go into 4-digits or potentially even higher.

The card is widely available on marketplaces like eBay. Although it’s also one of the more expensive ones of Doncic, so you’ll need to fork out a significant chunk of money to get one for yourself. It still represents a good ROI or at least a nice addition to your card collection. 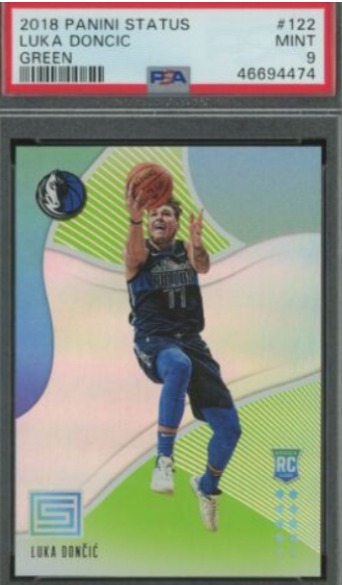 On the flip side, this Panini Status Doncic rookie card is among the least expensive ones on this list. However, this is likely to change in the future. Now, the design of this card might be polarizing – some will like it, while others might not.

If you can find a well-priced card, then you should absolutely go for it. It’s one of the rare options that still represent a good value, although that might change. So if you have the chance to get one of these for a sensible price, then go for it. 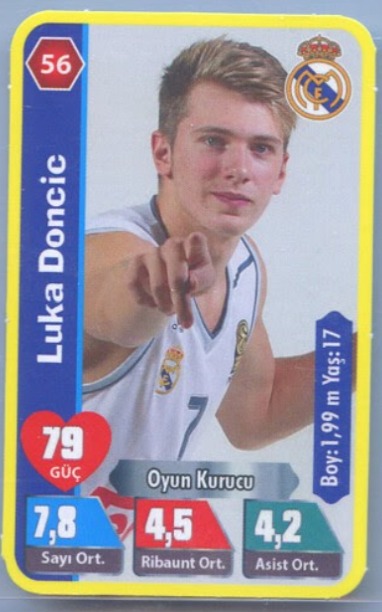 Let’s end with Doncic’s cards from his teenage years with Real Madrid. These cards are incredibly rare.

Let’s be real here – any card from Doncic’s days with Real Madrid will be expensive. That’s because there are almost no cards from his first real season in 2015 when he was just 17. The only one you might be able to find is the Turkish variation of his card where all of his stats are displayed, and an image of the 17-year old.

The second card from Real Madrid days you might be able to find is the 2016/17 Upper Deck Euroleague card. At this stage, Doncic was already an established first-teamer and the main creator of the team. This one’s already far more common than the 2015 card, although it’s not from his first professional season in the Euroleague.