The legendary point guard Bob Cousy — nicknamed “The Houdini of the Hardwood“ was the first great floor general of the NBA. Cousy played for the Boston Celtics from 1950 to 1963, and briefly with the Cincinnati Royals during the 1969–70 season.

Bob Cousy is a 6-time NBA champ, a one-time MVP, a 13-time All-Star and a 2-time All-Star MVP. But these numbers don’t do him justice. You had to see him play to truly appreciate his game.

Cousy introduced a new blend of ball-handling and passing skills to the NBA, and he was the NBA assists leader for eight consecutive seasons.

Bob Cousy was inducted into the Naismith Memorial Basketball Hall of Fame in 1971, and his #14 jersey was retired by the Celtics. Cousy is also one of only four players that were selected to each of the four NBA Anniversary teams.

Despite Bob Cousy being drafted in 1950, his official rookie card wasn’t released until 1957 when Topps came through with the set. There were no major basketball releases during that time, so multiple players had to wait for years for their first official RC. Some of them had become stars already, and that is true for Bob Cousy too. We’ll get to his official RC in a minute, but first let’s check out this interesting card.

The 1951 Berk Ross Hit Parade of Champions #1-11 is Bob Cousy’s earliest card. It cannot be considered his official rookie, as it belongs to an unofficial, multi-sport Berk Ross set.

Released as part of the Hit Parade of Champions that mostly included baseball, cards, this Bob Cousy card is still considered a rookie among hobby people.

The set also included star athletes of such sports as football, hockey and boxing. 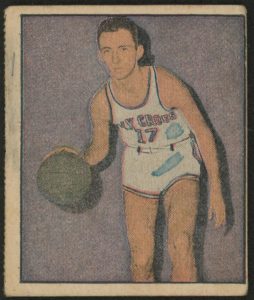 The design of this Hit Parade of Champions card is very basic: it’s just a square photo of Bob Cousy in his Holy Cross college jersey dribbling the basketball with his right hand. No logos, no names on the card, it is not branded at all.

What else is interesting is that the athletes were paired with each other and printed on a single cardboard with a perforation line in between. Bob Cousy is paired with Richie Ashburn in this set, a Hall of Fame baseball player for the Philadelphia Phillies.

In pair with Ashburn, or teared away as a single, the 1951 Berk Ross Hit Parade of Champions Bob Cousy #1-11 is a tough card to track down and it is a fairly expensive card for its type. It is an important Bob Cousy collectible, being his first ever sports card released.

Now this one is Bob Cousy’s first official rookie card, and it’s his best rookie card, hands down. It is certainly a very valuable piece of a very popular and classic 1957-58 Topps basketball set. 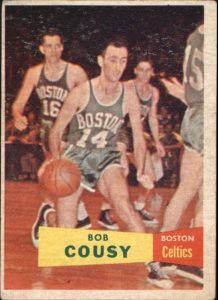 The set was the first basketball release in over a decade, so it was a highly demanded one right away, and it remains a popular one to this day. Many players on the set are considered rookies despite being drafted in previous years.

As to the design, the 1957 Topps Bob Cousy RC #17 is fairly basic, but very visually appealing. The colorful action shot of Bob Cousy dribbling the ball in his Celtics jersey, and the nameplate underneath with his name on the yellow background and team name on the red background.

The 1957 Topps Bob Cousy RC #17 is a relatively inexpensive card, which is surprising given its popularity. Nevertheless, it is the best rookie card of this legendary point guard.

Most other Bob Cousy cards were released after he retired: there are some cards dropped in the nineties, some autographed Bob Cousy cards, but stick to the end — there are a couple of vintage options too, that dropped during his playing days. We’ll review them as well! 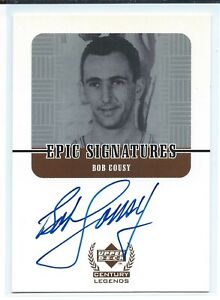 The Epic Signatures subset contained autographed cards of the greatest basketball players of the 20th century. In the set, you can find cards of Jerry West, Bill Russell, Oscar Robertson and other legends of the game.

The Epic Signatures Bob Cousy features the black and white photo of him in a gray and brown box. The autograph on the card is in blue ink and placed above the Upper Deck Century Legends logo.

The 1998 Upper Deck Century Legends Epic Signatures Bob Cousy #BC is one of the notable Bob Cousy cards and a nice collectible for those who are interested in vintage autographs. 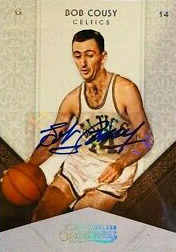 Another signed Bob Cousy card, this one is from the 2000’s. This Silver Signatures Bob Cousy belongs to the 2009-10 Timeless Treasures set that featured veterans and legends of the game.

The design of the card is pretty minimalistic, but spacious and elegant. The action image of Bob Cousy dribbling the ball is right in the middle, on a bright background. The autograph is placed on top of the image, in blue ink.

It is worth noting that the 2009 Timeless Treasures Silver Signatures Bob Cousy #76 is limited to only 25 copies made. It makes it a truly valuable card.

Back to a couple of vintage cards for Bob Cousy. Check out this vintage beauty — the 1961 Fleer Bob Cousy #10. 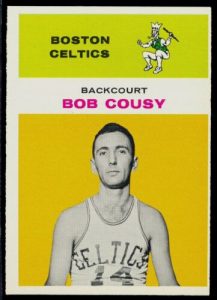 Part of the 1961-62 Fleer basketball set that is deemed to be the most attractive set of all time, this bold and colorful card stands out for sure!

Bob Cousy is pictured in a posed shot against a yellow background, with the Boston Celtics logo on a lime green background and player’s name and position placed in the middle.

Incredibly popular and very visually attractive, it is a must-have for any vintage basketball set collector. And the Bob Cousy #10? Very affordable and achievable card for many.

This is the action card from the same set as the previously mentioned. It features Bob Cousy’s action shot with him going for a layup in a black and white square image. Another difference is that the Boston Celtics team name and logo on top are on a yellow background. 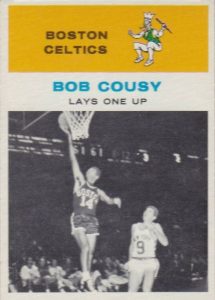 Part of the same popular set, the 1961-62 Fleer basketball set, this card is notable and even more interesting to the collectors because of the action shot.

As we mentioned, the 1961 Fleer set is important, and another reason for that is that it’s truly unique. It was Fleer’s attempt at basketball cards. A nice one, but just like Topps and Bowman, they discontinued production after only one season — only to come back strong, with the legendary 1986-87 Fleer Basketball nearly a quarter-century later.

Bob Cousy is truly one of the greatest basketball players of all time. He was one of the early legends of the game and helped shape the rules and how the game was played.

Bob Cousy’s cards reflect his legacy — his most valuable cards are almost exclusively from the beginning of the era of basketball cards when the game started to be popularized around the country with the help of big names like Bob Cousy himself, Bill Russell and Oscar Robertson.

From his vintage card options, the official RC to his Fleer cards and modern autos, Bob Cousy’s cards are all in demand. So whether you are interested in his modern basketball cards, signed versions or his vintage cards, or you’re just a fan of Bob Cousy, there is definitely a card for you.

See you around, and happy collecting!