2005 was the year that Aaron Rodgers made his Green Bay debut, so that’s when most of his rookie cards will be from. Let’s check out the best ones, now. 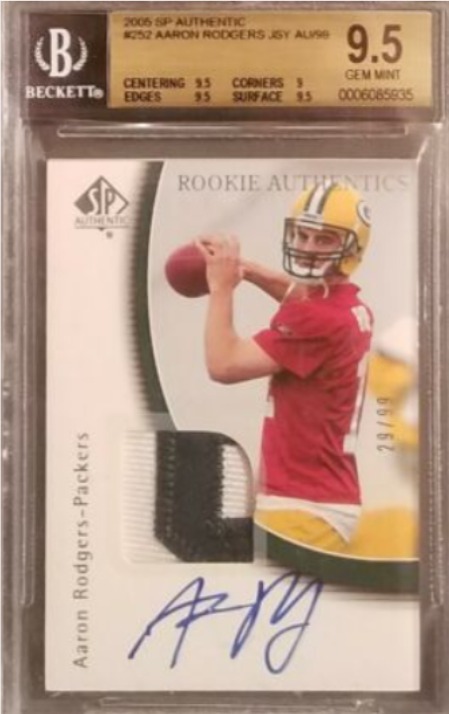 The SP Authentic rookie card of Aaron Rodgers is among the most valuable cards of this player. It’s also perhaps the best looking card out of all Rodgers rookie cards, as it has everything you need from it.

Style, elegance, and versatility – that’s what you get with this one. Even though you can clearly see that the card comes from the mid-2000s in terms of design, you’d want a card like this even today. It has a patch of his match-worn jersey, an autograph right below, and a nice image of Rodgers in action.

In addition, there were only 99 printed instances of this card back in 2005, so it’s definitely one of the rarest cards, too. It belongs to the premium category, that’s for certain. So the price is adjusted accordingly – depending on the condition of the card, you’re looking at a five-figure card for sure.

In our opinion, this card represents one of the better investments for those who can afford it. It will always hold value, and if you’re lucky enough to get yourself a good deal, do not hesitate. Even at the highest price points, these tend to go fast. Next up, we have the Playoff Contenders card. You could argue that it’s well into the premium category, too. Its price will vary quite a lot, but you can certainly expect this one to cost several thousand dollars and up to a hundred thousand, and even more in some instances.

Why is it so expensive you might ask? After all, it’s not as scarce as some other cards (530 prints), and there are some other autograph cards available, too?

Well, first of all, it’s a Rookie Ticket card. This type of design has been around 1998, and it’s typical for cards of rookie players who make their debut in a particular season and go on to become stars. The typical design feature is that they have a design as if they’re a ticket, along with the player’s autograph and a patch of his jersey.

You might remember that one of the earliest types of this card was the 1998 Peyton Manning card, and these became among the most popular types of cards soon after. Aaron Rodger’s Contenders card is among the most sought-after and valuable cards of this type, which is why it costs so much. Get it if you can afford to spend that much. The main outstanding feature of this card is the autograph. It’s smacked right in the middle of the card. But that’s not the only thing this card has going for it. The overall design is nice, plus the image of Rodgers is surprisingly crisp.

But one of the biggest factors that determine the (high) price of this card is its rarity. Only 99 cards of this variant were printed, meaning you’ll probably have a hard time finding one. The price of this card stands anywhere between a few thousand dollars and up to a few dozen thousand, depending on its condition and whether it’s graded or not.

It’s a strong card if you can find it, although again, it’s only for those who have a relatively large budget ready to be invested. You may make a good ROI if you can find one that’s reasonably priced, although be wary of knock-offs if you go after the ungraded cards. The next card on the premium list is the 2005 Bowman Chrome card of Aaron Rodgers. This card is a rarity, and that’s why it’s among the most expensive Rodgers card on the market. You’re looking at several thousand to potentially, a five-figure sum to get it.

The main thing that stands out with this card is the horizontal autograph design, which is very different from other autographed cards. This might or might not suit everyone, but it doesn’t change the fact that it’s scarce. Only 199 copies were originally made.

Other than that, the card looks sleek and elegant. It doesn’t have a flashy design, and it rather focuses on simplicity, which gets the job done. The image of Rodgers is the main focus of the card, surrounded by a blue-white border which completes it.

If the base card is not your cup of tea, the good news is that you have several great choices in terms of parallels. The rarest parallel is the Bronze one, which only had 50 copies to its name. But you’re unlikely to spot them easily, especially some other parallels which just don’t seem to be on the market. If you care about the looks, then the SPx card of Aaron Rodgers represents a nice proposition for you. It’s a very sleek card with a white-blue design, although this elegance comes at a price.

It’s not as rare as some other commodity choices on this list. It has a run print of 250, so you should be able to grab one for yourself. But it’s still a mid-tier card that can command a price of several thousand dollars if in the right condition.

The card has a patch of Rodgers’ jersey on the right-hand-side, and there’s an autographed stickered across the image on the left side. This is perhaps the only pet-peeve that many people have with this card – the sticker is clearly visible, and if it was a bit more elegant, the card would be even more pricey.

If you’re a bit pickier and you have a thing for rare cards, then you can go for the Gold spectrum parallel, which is limited to only 25 copies. This means that the price will skyrocket, and it will also be near impossible to find. With the Bowman’s Best card of Rodgers, we’re moving into the more affordable territory. At its best, this card can cost several thousand dollars, although you’ll probably find many instances where the card is ungraded, thus the value should be a bit lower.

One of the main factors that diminish the price of the card is its weird, diagonal design. It looks a bit all over the place, to be honest, along with the writing on the bottom of the card. So it’s fair to say that it won’t win any elegance awards, but it can still command a decent price due to its relative rarity of 199 copies.

However, it’s still a Bowman card and it’s quite rare, so the price of this card will stay up as long as you can find one. And it’s also quite likely to hold up value as the years pass by, if not increase in value. The Upper Deck card is the next instance of a card from a large and well-known manufacturer, meaning it’s a bit more widely available than some other cards we’ve just seen.

Foundations was a sub-brand of Upper Deck that was typical especially in the early 2000s. And the card we’ve featured here is its Exclusive gold parallel, which had a print run of 25. The base card is much the same, except for the fact that the golden color is replaced by purple.

Overall, the design might feel lackluster to some, although the autograph sticker livens things up and makes it a bit spicier.

You can go for the gold version if you’re after something a bit rarer, but if you’re satisfied with the base version, you might find it for significantly less. The gold exclusive version can cost several thousand, while the base version is a bit cheaper than that. Out of all the auto cards, this particular one feels the most natural. It doesn’t have the sticker autograph as many others do, and it goes with the autograph on the helmet instead. You have to admit this looks smoother and more elegant. One concern is the logo on the helmet which makes the auto a bit hard to see, though.

It’s another rare card, as only 199 copies were produced. So the rarity alone commands a relatively high price of several thousand. You can consider this to be a good mid-tier option and it’s in the area where good ROI can be made on it. The Leaf Limited is one of the darkest cards of Rodgers in terms of design. It’s also the rarest card without a signature, as it’s limited to 250 copies. The black background makes the Rodgers image stand out nicely, though, even though it might not be everyone’s favorite.

For a card like this in proper condition, you’d have to spend a four-figure sum for certain if you want a PSA 9 at least. Although there are some cards available below the thousand dollar mark, and those are graded lower. Be wary of ungraded cards as they might have centering issues, and always check those corners.

Again, it’s another mid-tier card that will suit you if you have a moderate budget and don’t want to go broke to find a Rodgers rookie card. It’s also right for you if you want a darker style, although note that it comes without an autograph. With the Donruss Elite card, we’re moving closer and closer to the budget territory. This particular card has a bit of a bolder design going for it, compared to some previously mentioned cards which tended to have a more elementary design. Again, if you don’t like shiny cards and you prefer a classic style, then it’s not for you.

But if you like shinier cards, then this one might be right for you. It also has an autograph sticker on it (the Century parallel), while the base card comes without one. The base card had 499 prints, while the Century variation only had 125 prints. The Topps rookie cards of Rodgers are the most affordable and easily available cards of this player. We’ve decided to put these two together as they look quite similar, although the Chrome variant is a bit more sought-after.

Both base cards look very similar, only that the image on the Chrome card is a bit different. Overall, the Topps Chrome card seems to be the more popular of the two, although the Topps base card tends to get a lot of love from budget-minded collectors.

In addition to the base card, the Topps Chrome has a lot of different parallels going for it – some are rarer than others. For example, the Gold Retro parallel is among the rarest ones, as there were only 50 copies printed originally. There are other refractors also available, although they tend to be a bit more expensive than the base card.

You should go for any of the two cards if you’re looking for something a bit more friendly for the beginner, and something that’s widely available even today. Although if you don’t like the simplicity of the base card, go for one of the parallels – but know that these are hard to come by and thus, expensive.