90s baseball fans will still remember the days of Montreal Expos and their many big stars, including Vladimir Guerrero.

Guerrero was known as a feared and powerful hitter that was just hitting his stride as the Expos got relocated. In 2004, Guerrero won his first and only AL MVP award, and he still holds the award for the most hits by a Dominican player in the MLB.

Guerrero’s cards were and still are hugely popular, thanks to his incredible numbers which warrant a second look at his cards again. Here is the Vladimir Guerrero rookie card checklist if you’re shopping for one (or several). 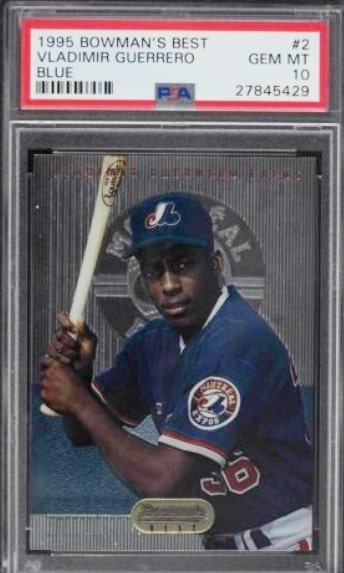 The 1995 Bowman’s Best Guerrero rookie card is one of the two true rookie cards that many collectors cherished when it came out.

Initially, this card was immensely popular especially among Montreal Expos fans, but also everyone else who appreciated the numbers Guerrero was putting out. It used to be one of the most popular cards for 90s collectors – and while the popularity has changed, it’s still a popular card today.

In 1993, Vladimir Guerrero was signed by the Expos as an amateur player when he was still only 18. For the next 3 years, Guerrero would ply his trade in the Minor League before making his official debut in 1996.

1995 was his official rookie year, though. He was still finding his feet a bit in his first season, as he was criticized for being too aggressive; however, he still put out impressive numbers for a rookie.

He had only one refractor, which might be unusual by today’s standards, but that’s the 90s for ya: base card and one refractor at best, and rarely more. It’s also his most valuable card overall. Here’s how it looks like: 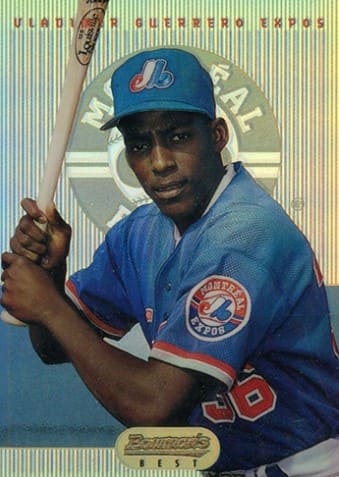 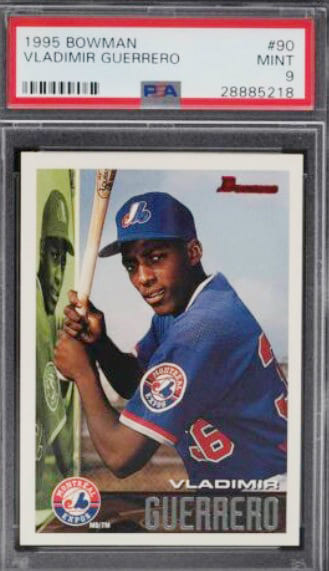 The 1995 Bowman Guerrero rookie card is the cheaper of the two rookie cards of Guerrero, but still admirable in its own way. While it doesn’t carry the same level of sophistication as the Bowman’s Best card (or its parallel), this card was perhaps the more popular of the two because of its availability.

One of the more interesting features of this card is the parallel image on the left hand-side of the card. It makes it look as though Guerrero is facing a mirror. This was one of the go-to trends for card companies back in the 90s.

It is not as valuable as the Bowman’s Best card, but therein lies the beauty of it: it’s easily available and not as expensive, so it will probably cater to a slightly wider audience of beginners.

That said, if you do prefer to collect more premium cards that have a special feel about them, then the Bowman’s Best Refractor is possibly the best way to go – if you have the bucks to afford it, of course.

But you also can’t go wrong with this one, even though it’s cheaper and not as premium. Back when it came out, the Bowman card was selling better because it was a part of a cheaper set and it was easier to get.

Other Vladimir Guerrero Cards to Consider

Supposing that you’ve already got both of his rookie cards – you’ll probably wonder what other Guerrero cards are worth any money.

These are the best non-rookie cards of Vladimir Guerrero for you to consider. 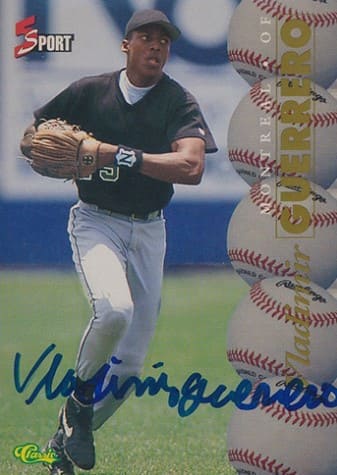 This is perhaps the best non-rookie card of Guerrero from a very early part of his baseball career.

It’s the go-to card for many collectors that prefer cards with autographs, though. And this one’s different from the rest of Guerrero autographed cards: it has Vladimir Guerrero written on it, while most other autographs just say “VGuerrero”.

While not the most expensive Guerrero card on the market, this one is still hugely popular because it’s from a very early part of Guerrero’s career, and as already mentioned, probably the earliest autographed card of the player, too. 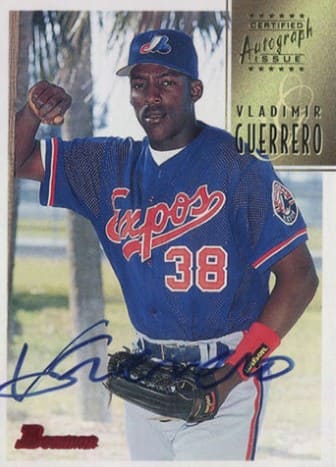 Here’s the autograph that I mentioned earlier – the famous “VGuerrero”.

Bowman Certified Blue Ink is probably the best autographed card of Guerrero, and perhaps the third most valuable and popular card, right behind the two rookie cards.

The blue ink autograph is by far the most common autograph on this card, but if you can find one with a black ink autograph, you’re going to have to pay significantly more, because those were rare.

And the gold autograph was even more expensive to get. So if you’re satisfied with the blue auto, then you’ll not have many problems finding this card, but if you’re looking for a premium card, go for the black or gold versions. 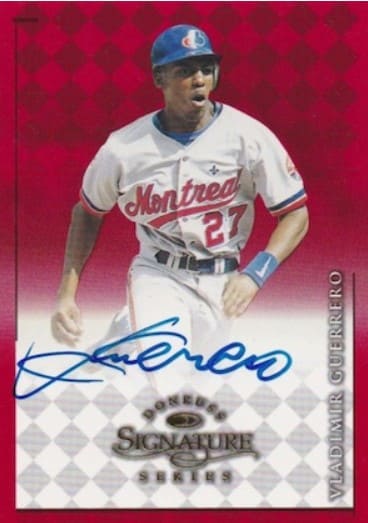 As already mentioned, autographed cards were a big hit in the late 90’s. This Donruss Signature Series is one of the rarest cards of Guerrero you can get, with a limited run of only 2100 prints for the base card.

And if you decide to get something even rarer, you can go for the Millenium Marks card, as there are only 1000 of those types. As for the Century Marks, there are only 100 copies of that type so those will be the most expensive.

Again, you can see the “VGuerrero” signature that was so typical for Guerrero’s autographed cards.

Be prepared to have to spend heavily on this card to get it, though. The base card can cost several hundred to thousands of dollars, while the Millennium and Century versions will cost even more than that. 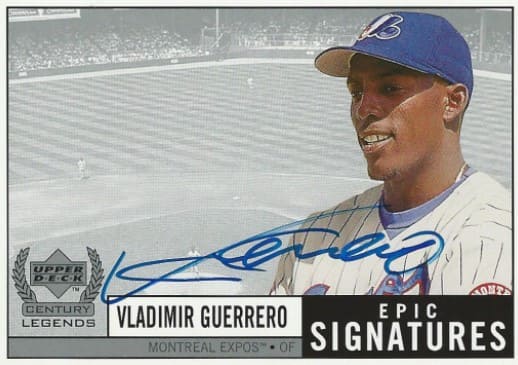 Here’s another autographed card that might pique your attention: the Upper Deck Epic Signatures card.

This card was a part of the Century Legends set that saw only the best players of the century in the deck, and Guerrero was one of the last additions to it.

On this card, you’ll see a nice mixture of the old and the new, where the only colorful thing on the card is Guerrero’s image, while the background is black-and-white with the blue autograph right below the image.

The base card is very popular with those who like autographed cards, although you can also go for the Century parallel, which was limited to 100 copies and is thus a bit more expensive and hard to get. 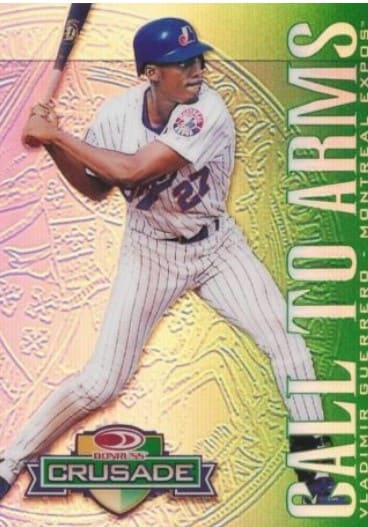 If you like a more medieval design with your cards, then go for this card. It’s something different, and a bit unique.

The Donruss Crusade was a highly popular card set back then. It’s known as an insert that was inserted in the 1998 Donruss set, but also some other major sets from 1998 such as Leaf.

There are 130 cards in the set, and all of them featured medieval caricature and features that make these cards feel especially different.

What is even more interesting is the group of cards that belonged to the “Call to Arms” set within the main Crusade set. These cards were a part of a printing mistake that caused the cards to have no numbers on them, so today, these cards feel a bit special for that reason.

These Crusade cards can cost quite a lot if you can find them in good conditions, although it’s not very likely you’ll find one because they’re rare. 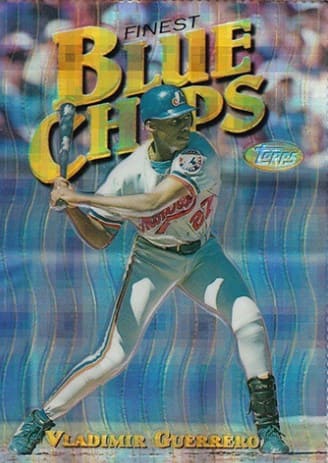 If you are after something a bit more uncommon and rare, then you’ll like the look of these Finest cards.

Topps Finest knew how to make rare and unique cards back in 1997. They separated their cards by tiers – bronze, silver, and gold. On top of that, each tier had its own parallels, which resulted in rare and expensive cards, especially for the gold tier.

This particular card in the image, the Die-Cut variation, is especially expensive and difficult to find today. But there are also many other cards from that set that are still expensive and very valuable, if you know where to find them.