We’ve all seen it.

A PSA10 goes up for auction and breaks some sort of record… Then, all of a sudden everyone is sending their raw card in to get graded hoping get a piece of that pie.

Some make the grade, others don’t.

I’ve always felt that with grading the more popular a card becomes, the less likely it is to get a 10 grade – if there’s a massive influx of PSA 10s, then the whole supply/demand balance is out of whack.

In this article, we’ll put that theory to the test. So put on your tin foil hats, we’re going to get a bit crazy here.

I was chatting to my mate PJ at  the Instagram handle, 2026wcinvestor about grading and the difficult job that graders have and the potential for subjectivity in the grading world.

PJ showed me this video – a really interesting concept looking at how common key cards in a set get a 10 grade compared to a 9 at PSA.

The video really got us talking, and intrigued on the impact of card grading over time.

Mainly, we were discussing the frequency of PSA10s over time. Are cards harder to grade a 10 once they become popular?

Sure, with a set market like Baseball or Basketball it’s pretty easy to know which cards will be the key cards in a set. But for soccer? Now it’s a little tricky – soccer card grading has become way more popular in the last few years and cards that used to be worth the change you find at the back of your couch are worth hundreds of dollars… and the cards that were worth hundreds are now worth thousands!

With fresh in the mind, I thought a small experiment could give us some answers.

For this experiment, my 9-5 as a high school teacher can finally come in handy – here’s a quick hypothesis for my using the same sentence structure I teach to my ninth graders!

If grading companies are truly objective, then there should not be any difference between the ratios of 9s and 10s over time because cards are judged on their merit.

The plan for this experiment is pretty simple in theory.

Why Only Look at Mint Cards?

Similar to the video from earlier in the article, we’re only going to be looking at cards graded at a mint-level, so the 9s and 10s. There are a few reasons why you’d do this:

In order to prove or disprove the hypotheses I need historical data on sets so I can see how the ratios of grading data changes over time.

Only problem is, that’s pretty much impossible unless you’ve manually keeping the data for a decade hoping it’ll come in handy one day.

Spoiler alert, I have not been doing that.

However, we do have the next best thing. The Wayback Machine!

Basically, it’s a tool that scrapes web pages over time – and you can use it to look back at old versions of websites. It’s like some internet time machine! Mostly it’s used so people buying websites can make sure the site they’re buying didn’t have anything untoward published on it in a past life.

The main setback of using a tool like this is we don’t get all the data we’d like in an ideal world.

Just think about how big the PSA site is… Think about every page on the PSA website.

Every sport, every season, every set, every card/sticker/ticket/whatever has it’s own dedicated page.

And that’s only the PSA site, this does every website that’s ever existed….

That’s a lot of scraping.

There’s no way we can get as much data as we’d like using the Wayback.

Luckily, the Wayback Machine has a bunch of soccer card data from various points throughout 2016. In fact, that’s the latest scrapes of the those pages.

I’m assuming this is probably because of at least one of these thigs:

Still, with data from 2016 and today, we can still do some pretty cool comparisons.

Another potential setback is that in the 2016 data you can only analyze the set as a whole. If you click to see the data for each individual card in the set it doesn’t work.

That’s not too bad though – because soccer grading is still pretty new compared to other sports, the majority of the time, only the key cards are graded anyway.

Considering our limitations like only having the ability to look at data from an entire set, and that we can only see data from 2016 and now, I wanted sets that have all of the following:

With those parameters, these are the sets chosen

I think that’s a decent list considering the options available.

The first set I looked at was the Barcelona Mega Cracks set – most well known for featuring three key Lionel Messi rookie cards.

There’s two sets of these, however the 2016 data lumped everything in together from what I could see, so I just used that and the more popular Spanish set as it’s comparison.

Here are the results. 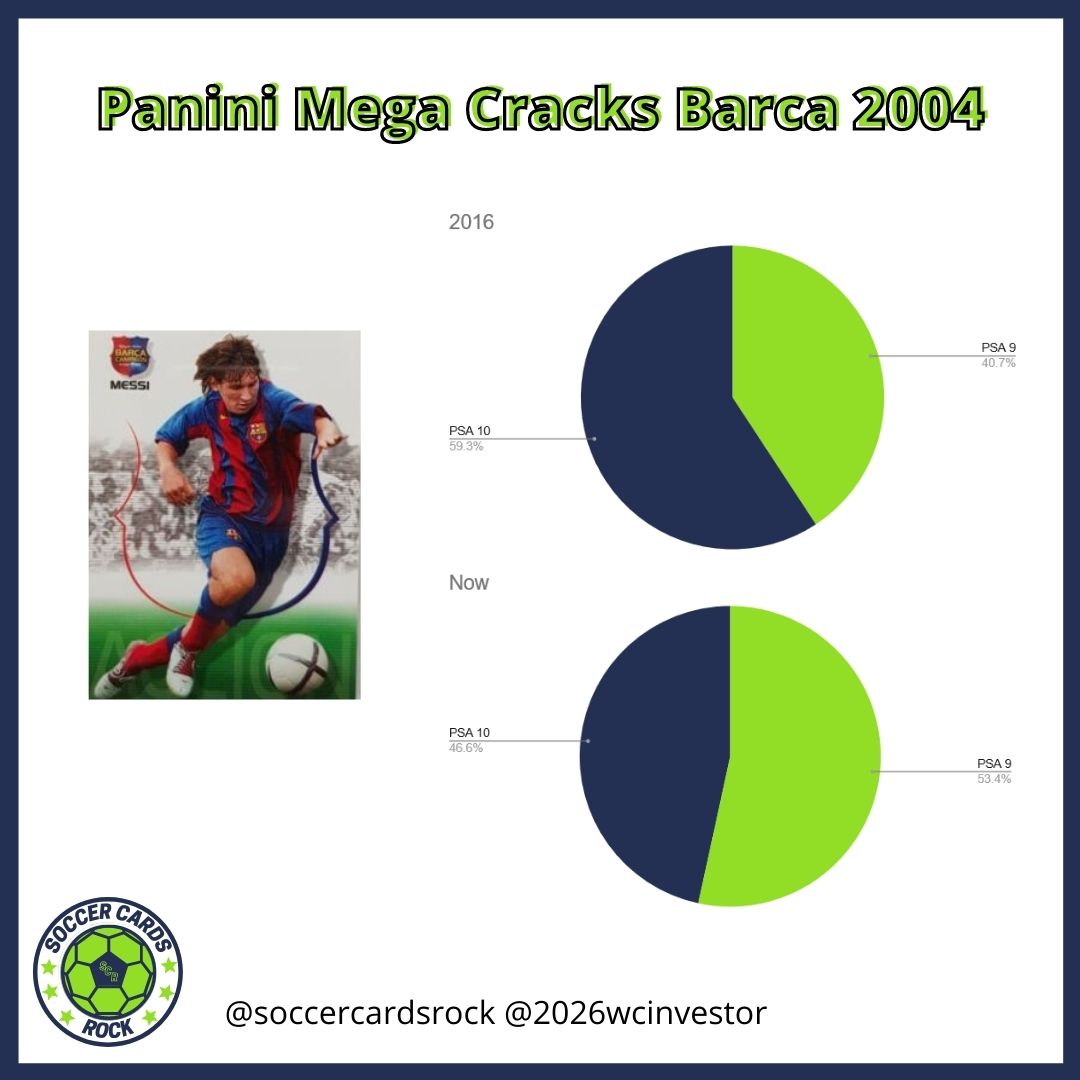 That’s quite a large turnaround considering the sheer amount of cards graded and with more and more cards from this set getting sent in, it’ll be interesting to see how it compares.

In my opinion it’s one of the top three cards in the entire soccer card hobby, and I think it’ll eventually make it’s way into the top five or ten in the entire sports card hobby over time.

With that in mind, here are the mint results in 2016 and now.

Since, there’s only been another fourteen PSA 10s added, with another fifty PSA 9s.

There’s an awful lot of movement there! 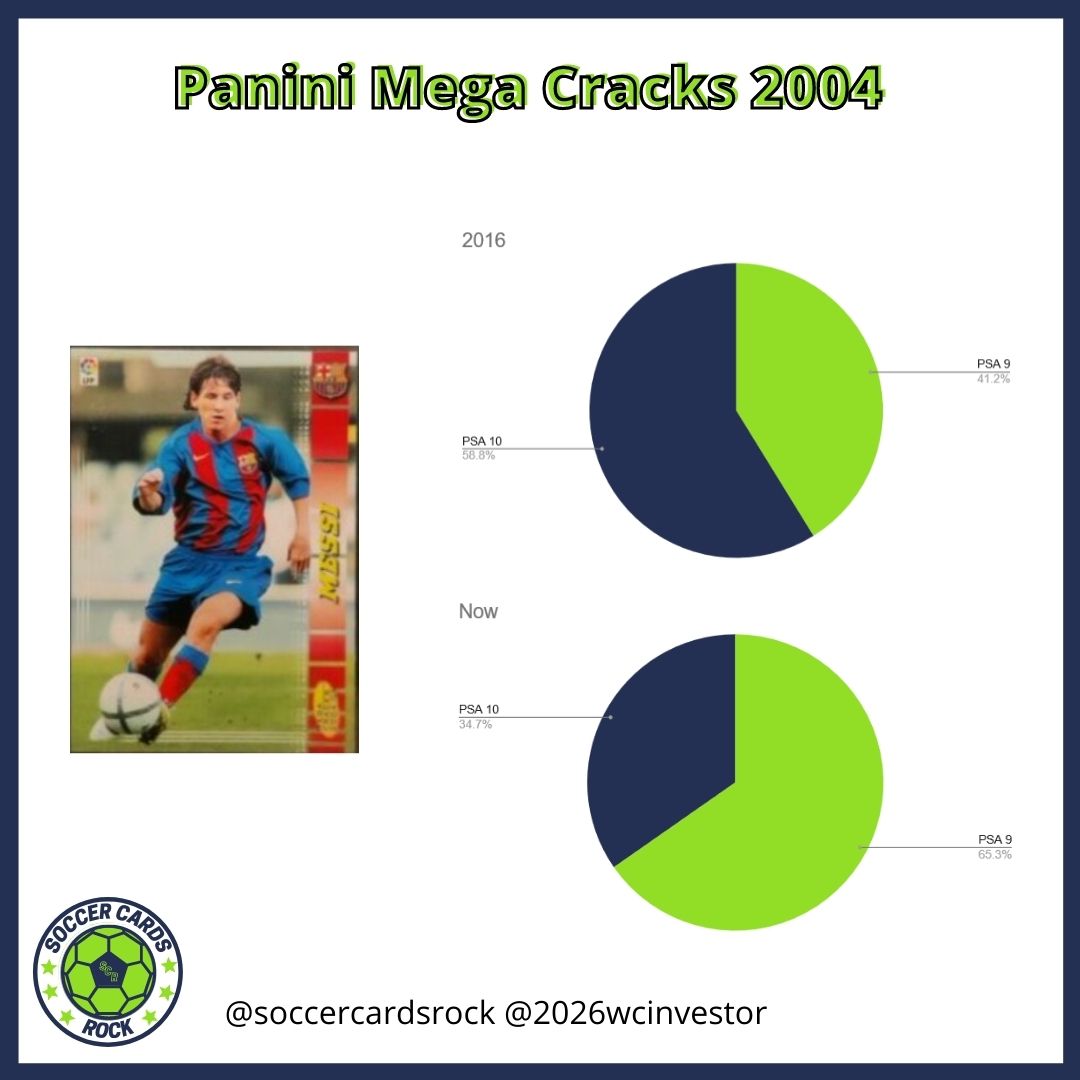 The 2003 Mega Craques set features Cristiano Ronaldo’s rookie card as it’s main card. The card itself hasn’t been as well sought out compared to the Messi rookie – although at the time of writing that has been changing a little and the Ronaldo is getting more love.

Let’s take a look at the stats.

This set has been the one with the most consistency when looking at the grades of mint cards.

These days the percentage of 10s has dropped but not significantly. Currently, it’s sitting at around 68%. Like I said, a drop, but nothing too big – there’s still more PSA 10s in the set then there are PSA 9s! 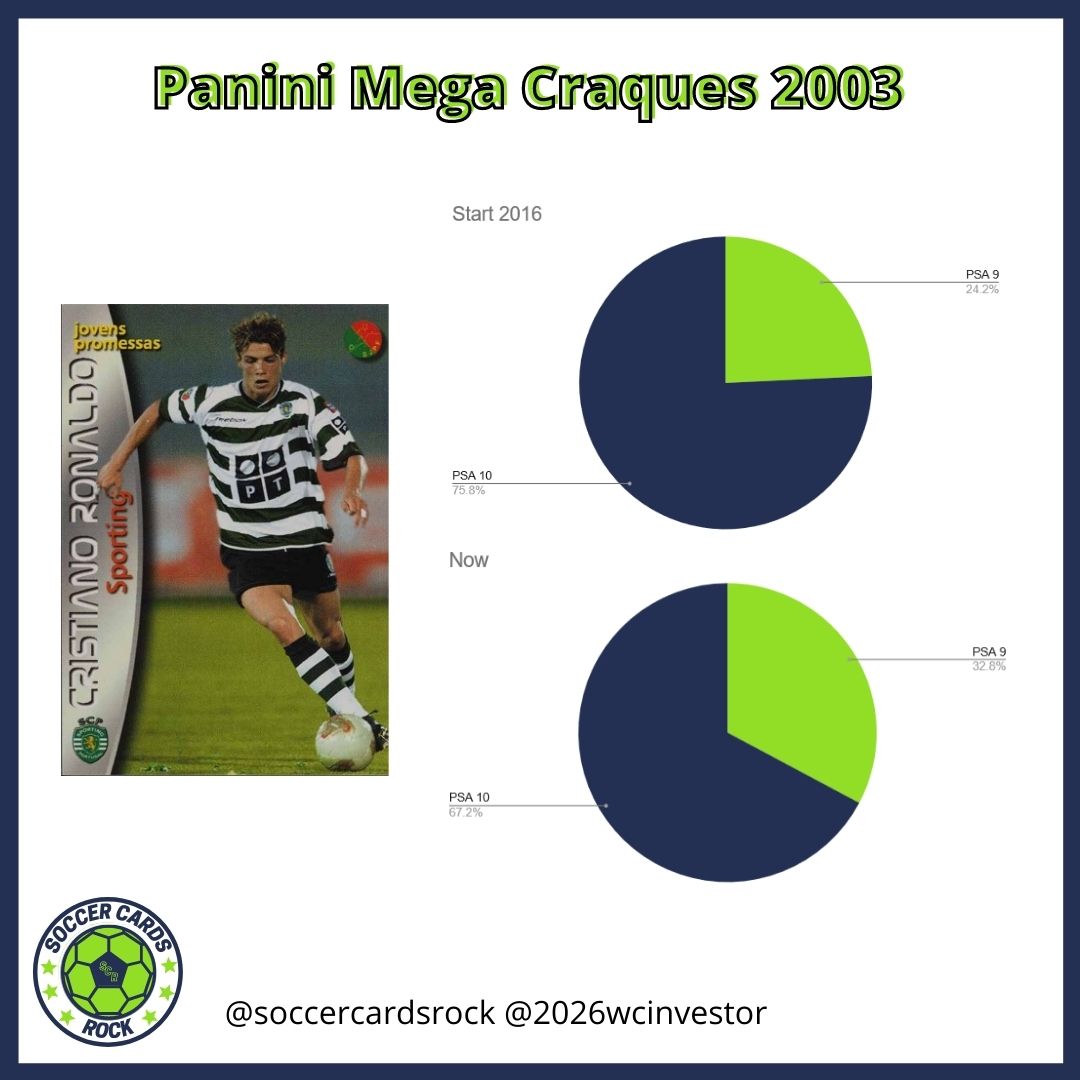 I really wonder what this set looks like going forward and if it’ll continue to stay at this rate.

And with that, I wonder if the price gap between the 9 and the 10 will be less than other key cards in the hobby.

This set is a little bit interesting because we can look at the data for the key card in the set!

The key card in the Merlin 1996 Premier League Gold set is a main David Beckham rookie – and it also happens to be the only card in the set graded as of the time of writing.

So this is an analysis of the Beckham card and the entire set all in one (talk about bang for your buck).

Another massive difference in this data.

With the first four mint Beckham cards sent into PSA, three of them were graded a PSA 10. Since then, there’s been another 63 cards get a mint grade, and fifty of them have been a PSA 9 with only another thirteen getting a PSA 10. 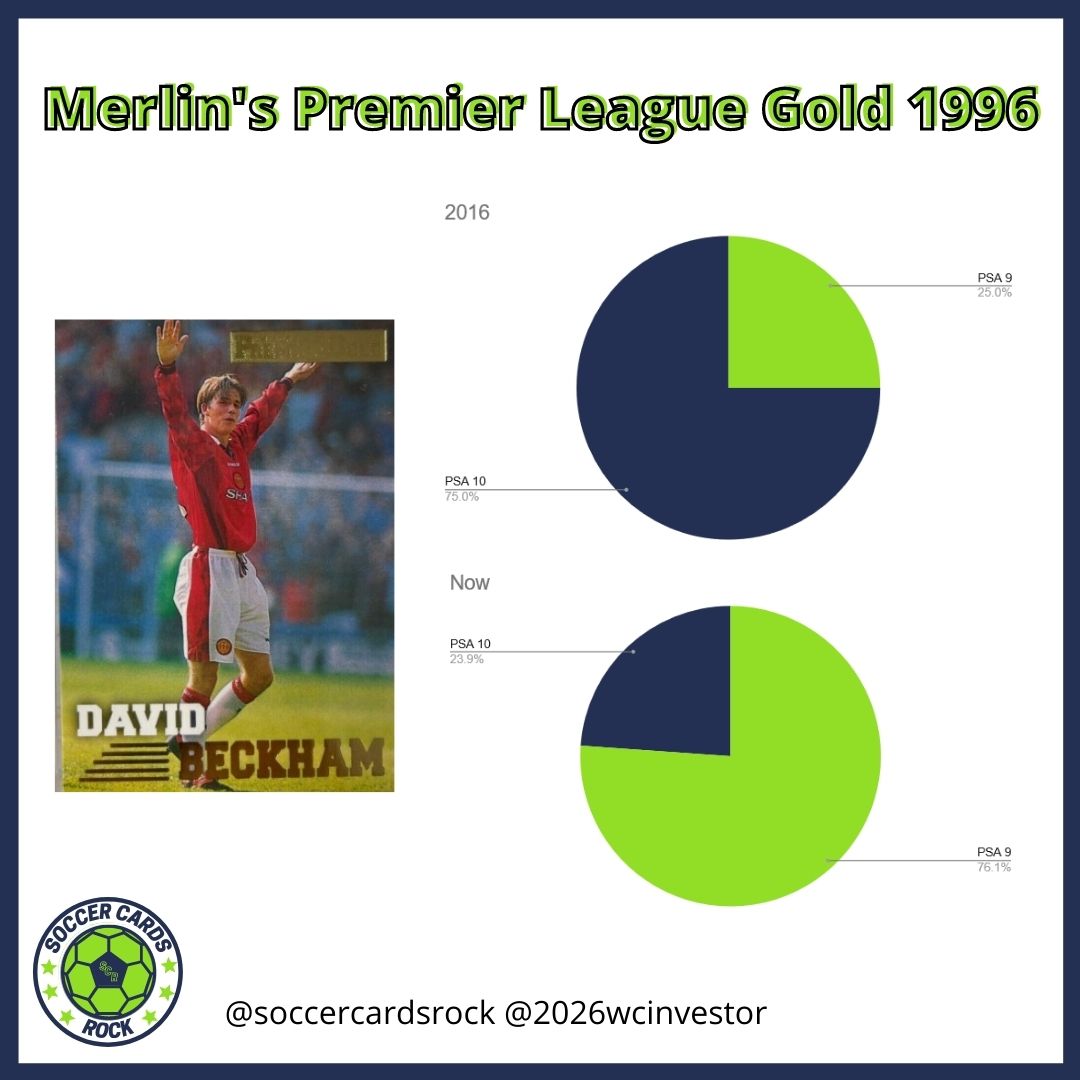 Granted, the four cards to begin with is a tiny sample size, but it’s interesting to see the sheer number of 9s that have come up since then.

I don’t know if I’m burying the lead by putting Prizm this far down, but I wanted to keep it in chronological order.

The Prizm World Cup set has proven to be one of the biggest sets in the hobby. While it wasn’t Messi or Ronaldo’s first World Cup (that was the 2006 World Cup), it was the first “Prizm”, which I guess means something – along with being the first World Cup for a lot of other great players.

For this I’m only looking at the base cards – with all the different parallels it would be death by pie chart. 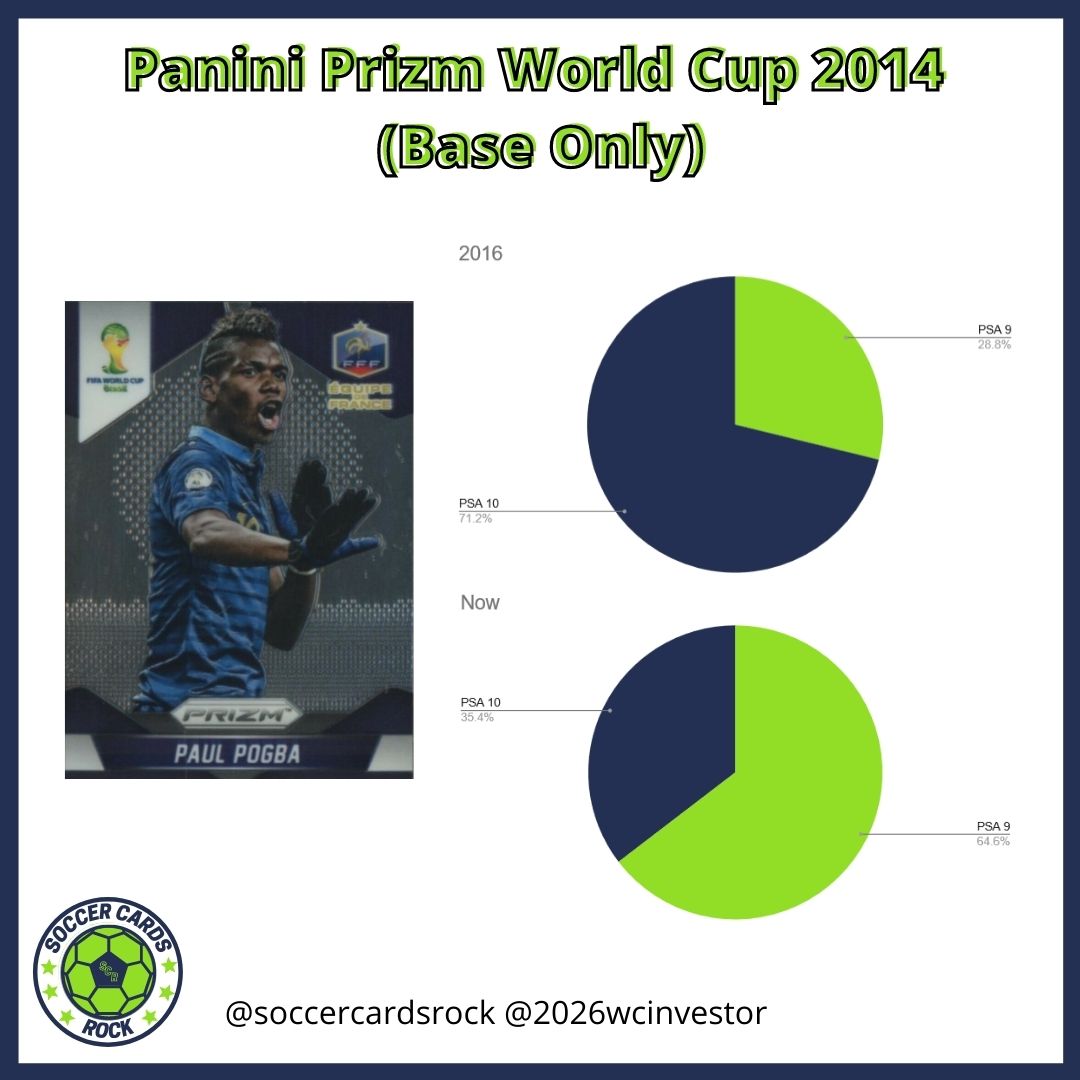 That’s a massive drop off considering there was nearly 8500 cards get mint graded since then. I don’t think I expected a change like that – I was definitely expecting more 9s than 10s in 2016 considering people talk about how hard the surfaces of Prizms can be to get 10s on – even straight from the pack.

I wanted to include a set of stickers in this analysis because it’s lore that stickers are super hard to get high grades.

I originally wanted to use the 2006 World Cup sticker set, but there were far more 2014 stickers graded in the 2016 data, so I thought that would give a better look.

Well…. there’s more PSA 10s than there are PSA 9s, which puts the whole sticker thing to bed for that set anyway (it’s a fact that looking at card vs sticker grading, stickers are way harder to grade overall).

That number has dropped since then, and at the time of writing, about 70% of stickers that got a mint grade received a 10. 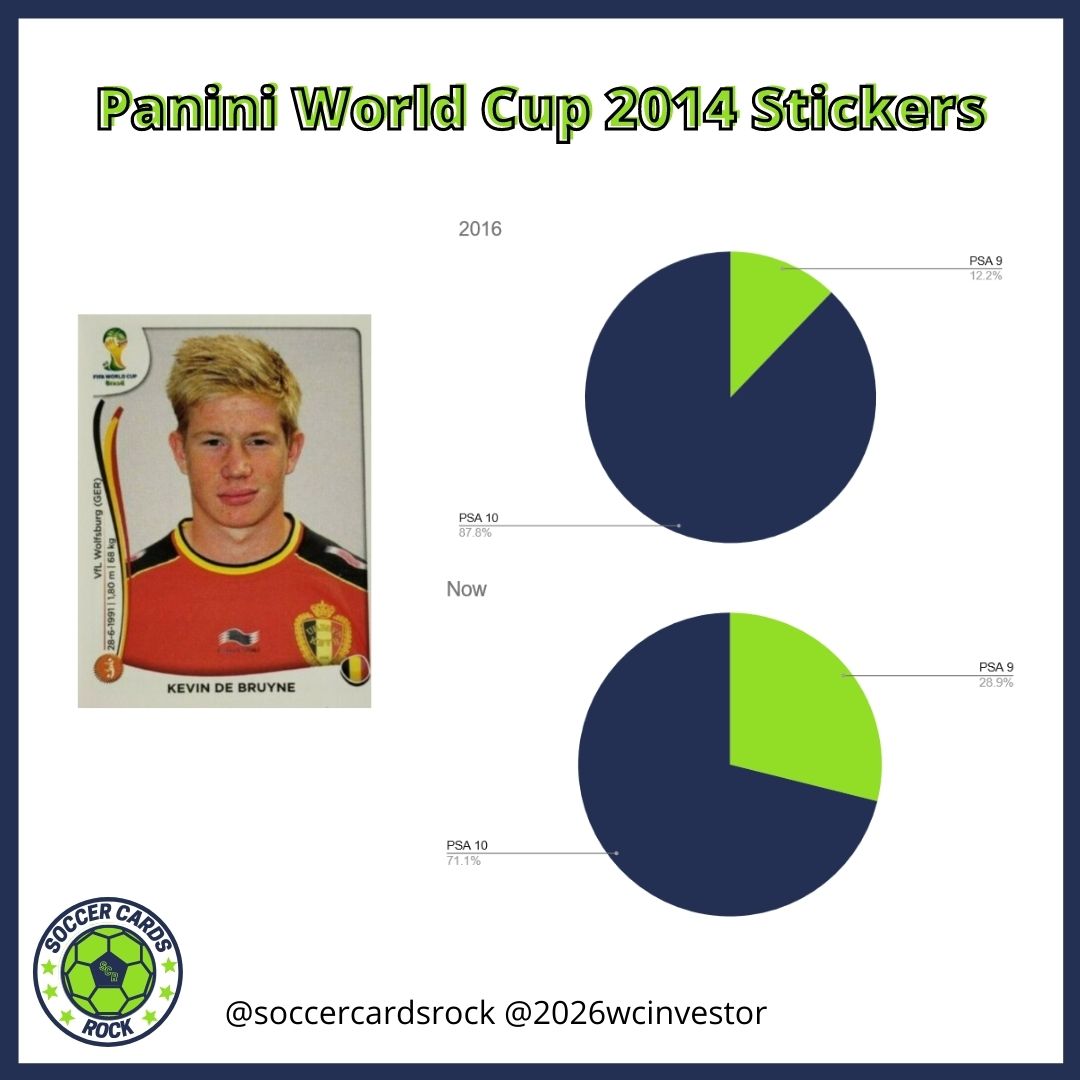 I didn’t expect to see the stickers to grade with more 10s than 9s, and it’ll be interesting to see how that number goes over time. There’s some key players in this era that had a debut World Cup in 2014, so the set will have some legs long-term.

Looking at this, you can definitely notice a trend that a mint grade is more likely to get a 10 opposed to a 9 the earlier it’s graded.

Out of the six sets we looked at, each one of them decreased in how frequently a PSA 10 is awarded.

These days, the percentage of PSA 10s has halved, with around 35% of mint cards getting the PSA 10 label.

Does that mean that PSA are adjusting the market of PSA 10s once a card becomes popular? I wouldn’t say that for sure, there’s multiple other factors that could come into play here (I’ll talk about those below).

Looking at these numbers though it’s impossible to argue that in 2016 more mint cards were given a PSA 10 grade compared to a PSA 9 and now that isn’t the case.

It will be very interesting to see if this gap widens over time.

Other Reasonings and Potential Rebuttals

Like I said, there’s some obvious alternative explanations and potential rebuttals here:

However, I don’t really see those as too big of a case – in this case study, we’re only looking at the cards that were mint graded. The total number of cards, or the age of the cards shouldn’t matter – we’re simply seeing how PSA compare mint graded cards against one another.

For me, the biggest rebuttal is due to the sample size. I’ve only looked at six sets from the entire PSA selection. When you consider the sheer amount of cards PSA have graded, we haven’t even scratched the surface.

I wouldn’t say it looks good though…

Way to Improve this Study in the Future

I think the best ways to build upon this study going forward would be: