Russell Wilson is today known as one of the best running quarterbacks in history. His rookie cards are one of the highest valued modern cards.

However, not many people are aware of his baseball rookie cards.

In this article we’re going to take a look at both baseball and football Russell Wilson rookie cards.

These are the main Wilson cards you should be looking at. We’ll also stop briefly to take a look at his baseball cards later on – skip further down if you’re interested in them. 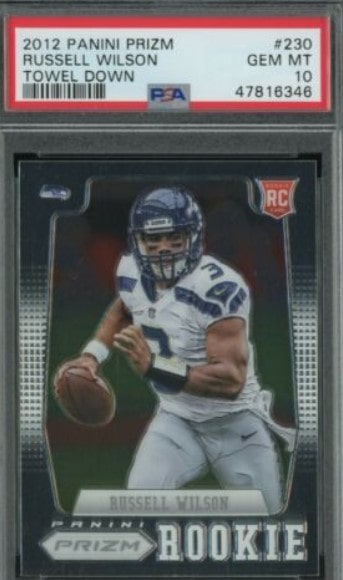 Panini Prizm is one of those brands that we always associate with rookie cards. The base card is one of the most widely available cards of this player. But some refractors are so scarce that they’re among the most expensive cards overall of Wilson.

This is especially true of the Gold parallel, as there were only 10 cards of this type printed for the market. The base card will cost you several hundred dollars, depending on its condition, while the gold prizm’s value will be much higher than that. It will go into thousands, if not tens of thousands.

Another interesting parallel you should be taking a look at is the silver prizm. But if you’re someone who’s looking for entry-level cards of this player, then you can have a look at the base card. 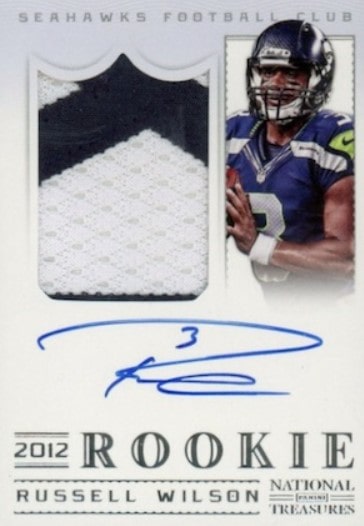 If you’re into the card collecting world, then you know by now that National Treasures cards will always be some of the most valuable cards in the world. This Wilson card is no different, of course, but its price is amped by the player that’s on it.

These cards are found in all sorts of shapes and sizes. Some are vertical while others are horizontal, but all of them should contain the player’s signature, a patch of his jersey, and an action picture of the player. One common factor of these cards is their elegant design. All of them are printed on a white background, giving them the classy look these cards have always had.

The card can reach dizzying heights if it’s in top condition. It can be anywhere between several thousand dollars and up to a hundred thousand, depending on the market itself.

At least you know you’re getting something extraordinary and rare with this one, though. The base card had 99 cards printed originally, although there are some parallels that you can consider. These include Gold (49), Black (25), Platinum (5), Red (1), Yellow (1), and some others that only have one single copy. 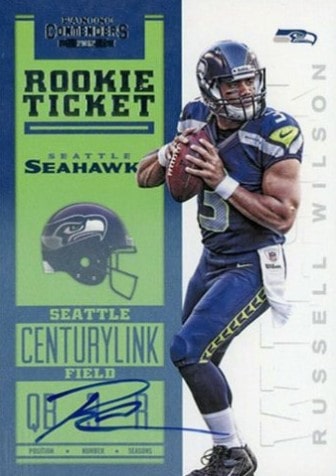 It can be a tough choice if you’re into premium cards. National Treasures and Panini Contenders have both worth contestants in this category when it comes to Russell Wilson cards. Both have something unique going for them.

Make no mistake: you’ll need to spend up to several thousand bucks to get this one in PSA 9 or PSA 10 condition. But the most expensive Panini Contenders cards are still a bit cheaper than National Treasures cards, and they still have that premium feel many card collectors go for. 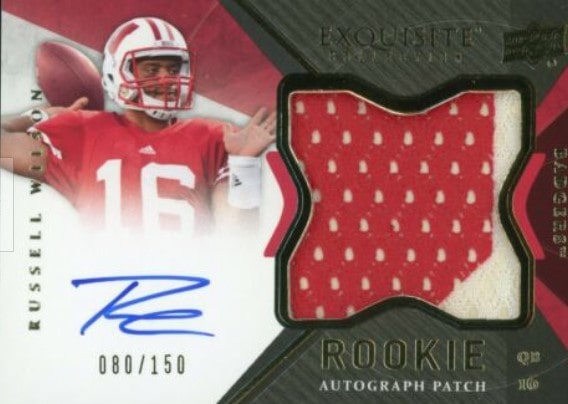 Exquisite cards from Upper Deck’s collection were always at the top of the popularity ranks from this provider. They had this premium feel to them that was meant to rival National Treasures and other cards of the same echelon.

It’s also a bit different from the other two cards we’ve seen so far, especially in terms of colors. It’s primarily red with white and black parts on it, as it has Wilson playing in the red jersey of Seattle Seahawks.

So that’s the main distinguishing factor that makes this card so vastly popular. Another thing to mention is that there were only 150 of these originally, so they’re also rarer than Panini Contenders, for instance.

You may find mainly ungraded cards on marketplaces today, though. This doesn’t appeal to some collectors, but it presents a nice chance for you to get a good bargain – provided that you have an eye for details and you can grade a card well, though. 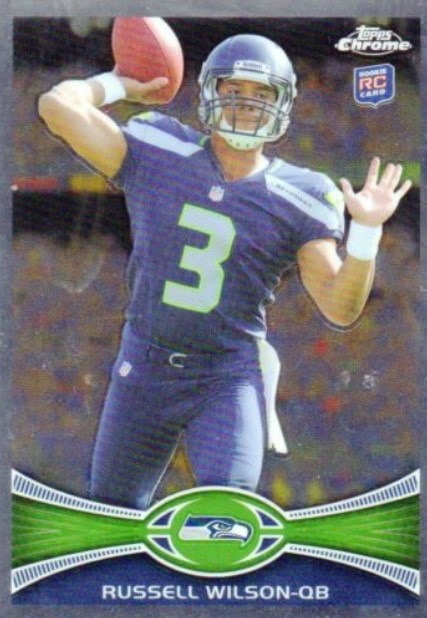 The Topps Chrome rookie card of Wilson is perhaps the most common card that you’ll find of this player. It’s one of the most popular brands for rookie cards in history, because of its nice and elegant design and widespread availability.

You can’t go wrong with this one. It’s going to appeal to both entry-level collectors and those who look for premium cards. If you’re truly serious about getting the most premium cards though, you can go for one of the many parallels of this card. There are more than 20 refractors and variations that you can get.

One of the more common ones is the Topps Chrome Rookie Autographs card, which looks like this: 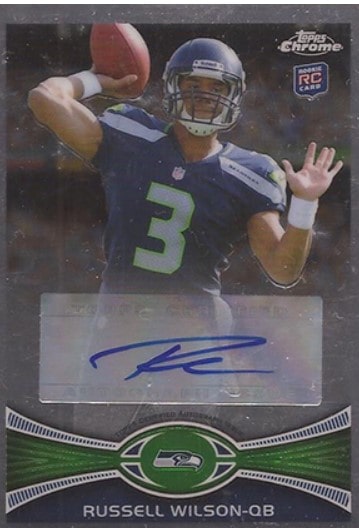 It’s virtually the same card where the only difference is in the signature right below the image. While the signature is nice, some collectors won’t like the fact that it’s in the form of a sticker.

The base card is very affordable and easily attainable, but some refractors can cost several hundred to several thousand dollars. This card offers much versatility which means it’s an appealing choice to a wide array of collectors. 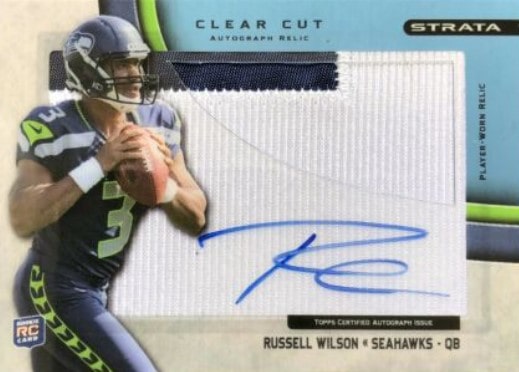 This is one of those cards that will have a premium feel about them, and are still widely available to this day. Originally, these cards were considered to be relics and they were only available in one-card packs, so it was quite tough to get them in a pack.

The main appealing feature of this card is the large match-worn swatch where you also have the chance to feel the jersey itself on the card. It’s a nice touch. Also, there’s an autograph that’s right on the swatch’s protection piece, so it will stay there for quite a long time provided that you have this card stored safely.

If you want, you can go into some of the parallels that have more colorful swatches. The base version that you can see here has a less colorful swatch, but it’s also less expensive. Most of them will be ungraded though, so watch out for the quality of the card on the whole. 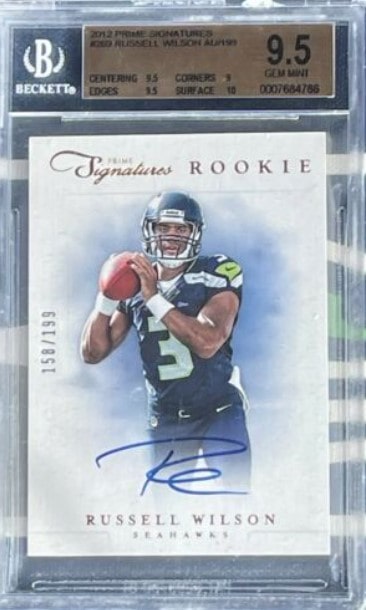 Here’s another card that fits into the premium category – it’s the Prime Signatures rookie card of Russell Wilson. Back in 2012, this set was among the most popular and best-selling football sets overall. And if you can get your hands on one of the rookie cards, even better.

You can see why these cards were so appealing to collectors – and still are today. They have this classic, elegant look without putting too many features onto the card. It takes the “less is more” approach without overwhelming us with the many unnecessary features that other premium cards opt for.

It doesn’t have a swatch, although it does have an autograph right below the image. This will increase the value of the card slightly, along with the fact that there were only 199 of these base cards printed originally.

If you’re looking for a more classy and perhaps even a bit more traditional card, then you should opt for the Prime Signatures Wilson card. It’s not the cheapest of cards but you’re getting your money’s worth for sure here. 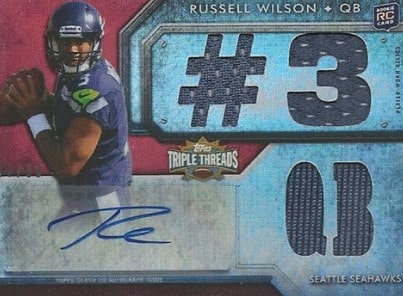 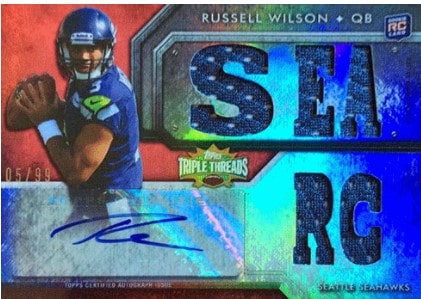 There are two different variations of the Tripe Threads cards from Topps. Both are limited in quantities, so you might need to spend a bit more to get them both. They’re quite different, though. The main difference is how the swatch is presented – the first one has #3 cut out, while the other has SEA and RC printed out so that the swatch is visible.

The second one is also a bit shinier than the first one. Both have an autograph, which is stickered onto the card. As always, this is a double-edged sword that some collectors won’t particularly like, but it’s no big deal for others.

This card still belongs to the premium category, but only just. It has the plain version of the jersey, which is not favorable for some, although it still has everything going for it that a premium card should have. 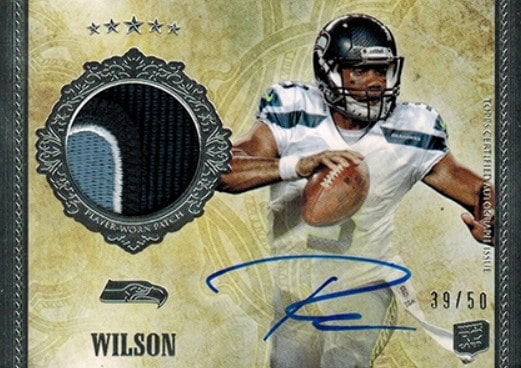 The Topps Five Star Russell Wilson card is among the priciest cards of this player. It has an autograph, a match-worn jersey patch, a limited run of 50, and an appealing design. This is everything that makes a premium card tick.

It’s different from National Treasures in the fact that it has a smaller swatch, which doesn’t do it any favors. But the good news that there are some variations of this card that have larger swatches, although these also come at a price.

Even though it’s a bit hard to get into the club of owners of this card because of its limited quantity, it’s still a great long-term investment. As years go by, this card will get more and more expensive, while more and more collectors will prefer to keep this card for themselves. This card will age like fine wine.

Admittedly, the short of Wilson baseball rookie cards is short. But these cards are worth taking a look at if you’re a baseball card enthusiast. His baseball cards are his earliest sports cards out of all of them. 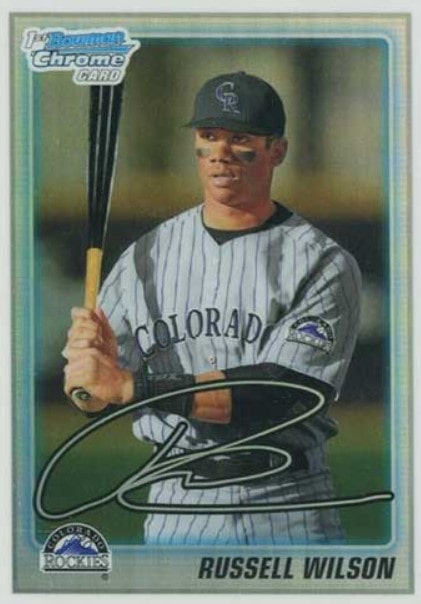 Just lie Bo Jackson, Russell Wilson was initially recognized as a huge talent and particularly a fine athlete. This meant that he could play both baseball and football to a pretty high level.

Wilson was already picked in the 2007 draft by Baltimore Orioles, but he decided to pursue a college education instead. From 2008 to 2010, he played both college baseball and football, although he was primarily leaning towards football.

However, in 2010, he was drafted by the Colorado Rockies to play in the MLB in the fourth round of the draft. He shortly abandoned his football career to join the 2011 spring training with the Rockies. However, he spent most of this season with the Asheville Tourists, which was an affiliate team of the Rockies.

From 2011 on, Russell decided to focus on football, although he still attended some spring training with various teams. Perhaps the most famous moment in his baseball career came in 2018 when he was fielded by the New York Yankees, which was his childhood dream, playing alongside Aaron Judge.

This Bowman Chrome card is relatively easily attainable and not too expensive. Though a top-rated card like this can cost up to a thousand dollars if not more. 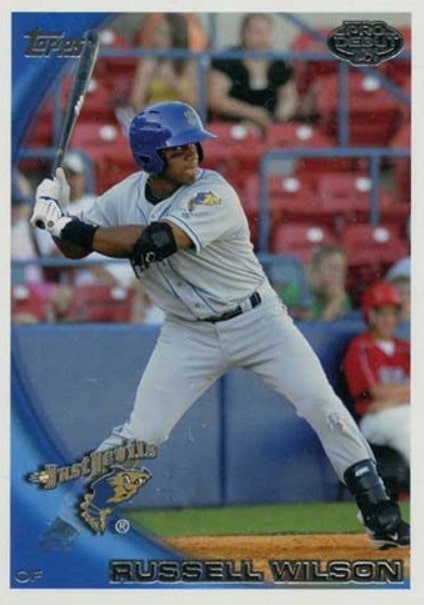 The other baseball card that you should know about is the Topps Pro Debut card from 2010. Like the Bowman Chrome card, this one tends to have more popularity with baseball fans rather than general card collectors.

This card is on an upward trend, though. It seems as though more and more collectors are starting to appreciate Wilson’s early days in baseball. But this card is a bit more expensive than the Bowman Chrome card.

That’s perhaps because this card was from an earlier part of his baseball career, where he was still in college. Nevertheless, you can still consider getting this card if you’re interested in baseball cards or you just appreciate Russell Wilson and his sporting talents and you want something of a novelty.

Along with guys like Tom Brady Aaron Rodgers and Peyton Manning, Wilson was one of the best QBs of the 2010s. A great all-round athlete and one of the best running Quarterbacks in memory.

He has a series of great rookie cards in both the NFL and in baseball too, where he was drafted in the 2010 MLB draft.