Randy Johnson is one of the longest-standing pitchers in MLB history. He’s clocked over 20 years of experience at the very highest levels, collecting numerous awards along the way.

This also means that his rookie cards still maintain a high level of popularity among collectors of all types.

His cards were printed during the “Junk Wax Era”, which was when card companies started pumping out huge volumes of cards to satisfy the needs of the market.

That’s why you might be able to get yourself a sweet deal on one of these Randy Johnson rookies.

These are your best options when it comes to Randy Johnson rookie cards.

There are many interesting options, so let’s start with the most popular ones. 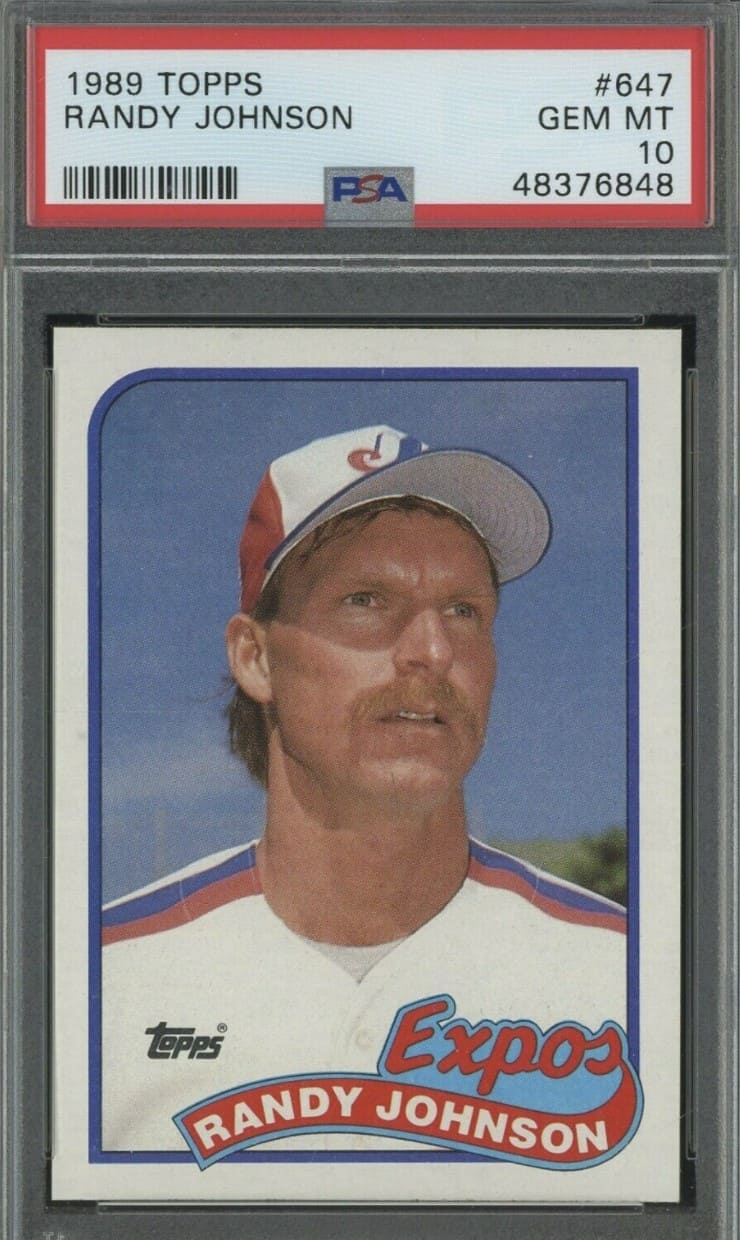 With this Topps card, you’ll be greeted by that famous intense look and the mustache of Randy Johnson, who was one of the most successful pitchers of all time.

This Topps card from the late 1980s still featured the classic Topps design. It looks minimalistic, but it just works. The blue border and the red-blue graphics work well with Randy’s outfit, and the blue sky in the background only makes it look more elegant.

The base Topps card is one of the most highly sought-after Randy Johnson cards, but the good news is that it’s going to be fairly easy to find – mainly because of the high print run during the Junk Wax Era.

And even though it won’t get very expensive, you’ll still have a lot of interest in these cards. The community is still active when it comes to the Randy Johnson Topps card.

But if you do want something a bit more premium-feeling, then you can consider the Topps Tiffany Randy Johnson rookie card: 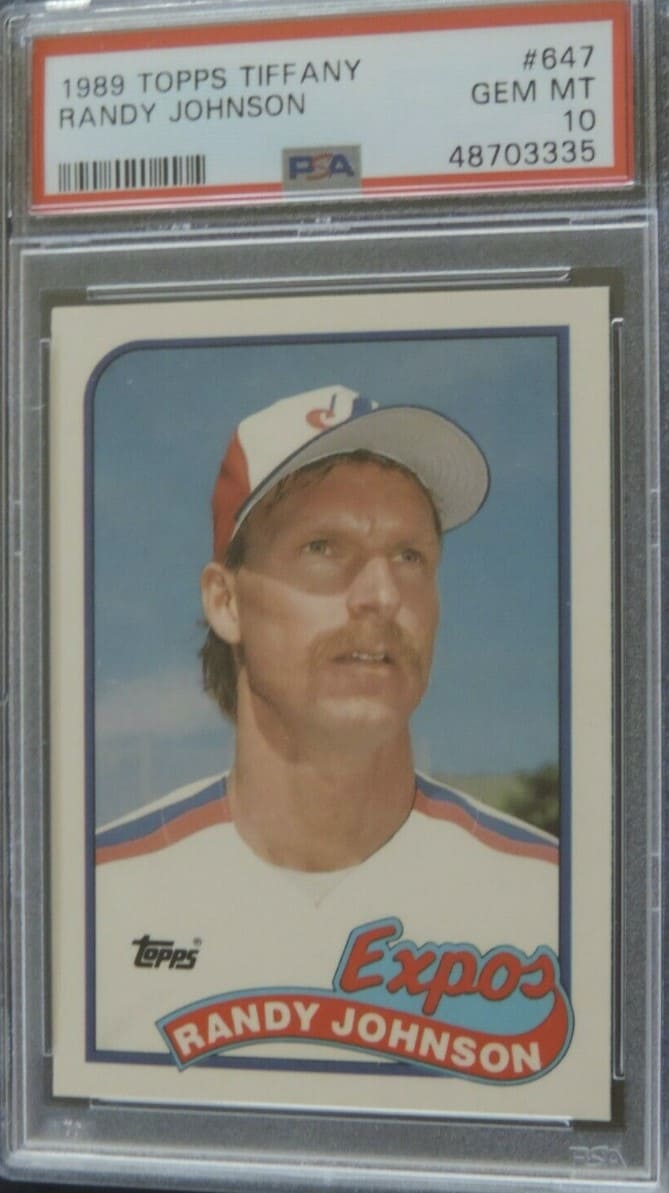 Now, this might be the most expensive rookie card of this player overall, but that’s to be expected with Tiffany cards.

You’ll get a higher level of quality with this card, which is thanks to the better card stock but also because of glossy fonts. They’re also a bit rarer than the base Topps cards. 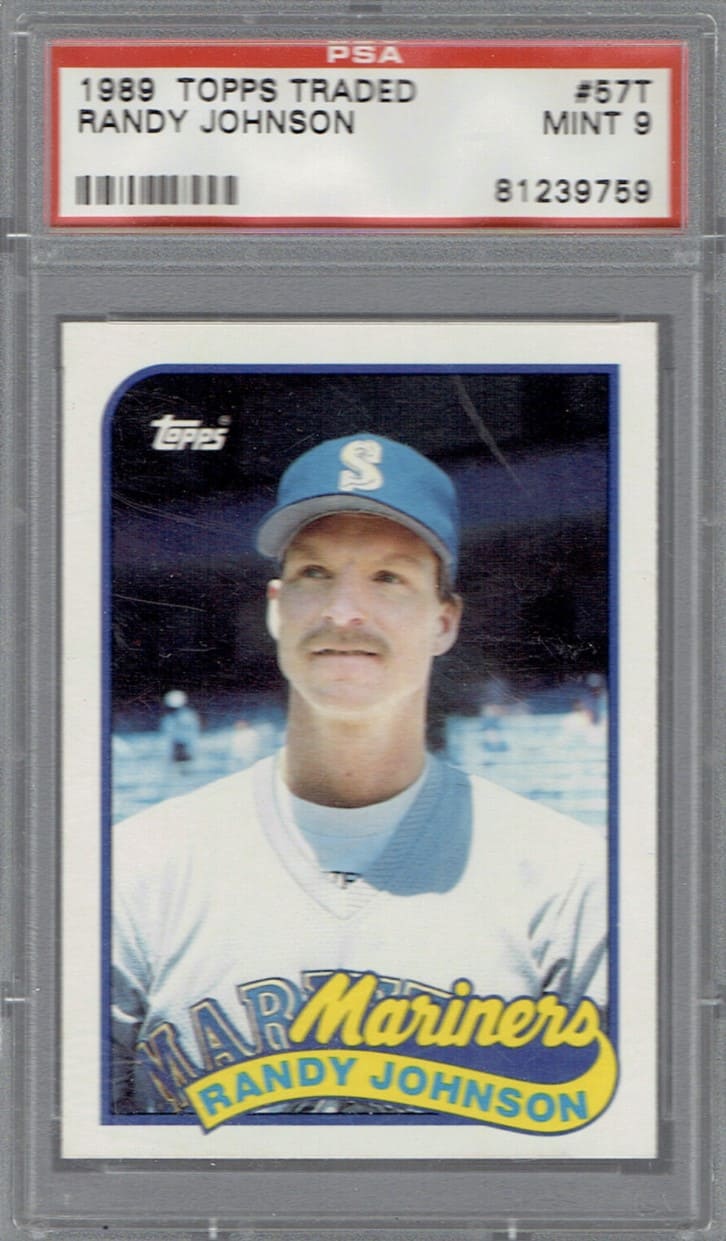 If you’ve been in the baseball card collecting world for a while, then you know that Topps and Topps Traded are two different card types.

Topps Traded is known for including players that were drafted from the minor league to the major league. It featured rookie cards of some of the most distinguished players, including Randy Johnson.

These cards started to be introduced in the mid-1970s, but never quite reached the same level of popularity as base Topps cards.

As a consequence, this card may not be worth as much as the Topps card, but will still be easily available on the marketplace and it should not drain your budget. 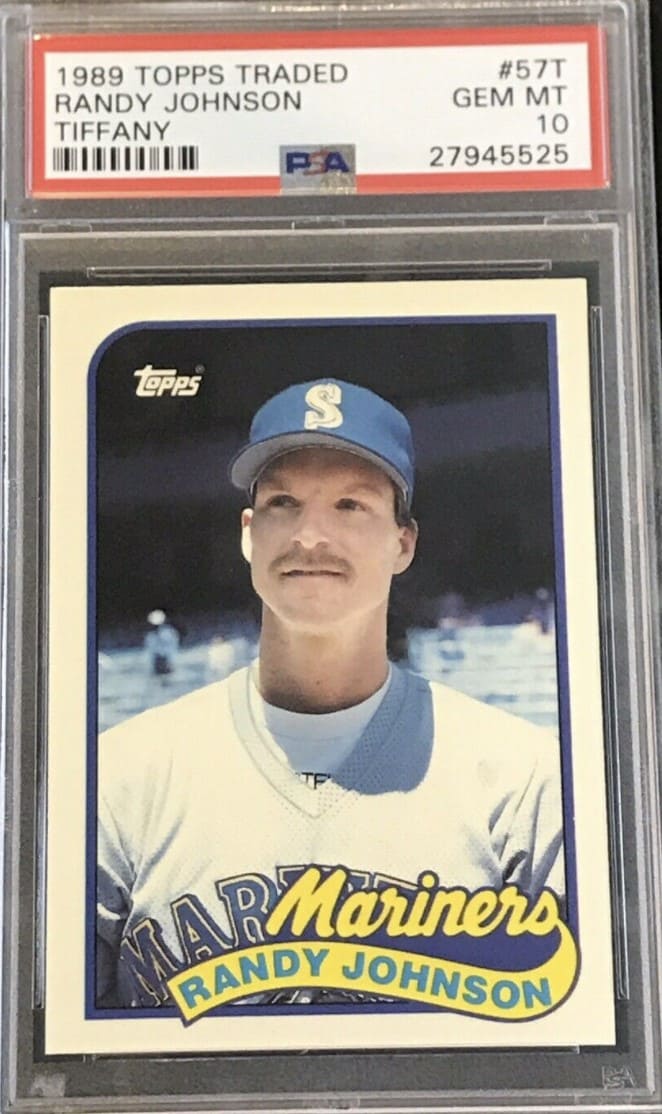 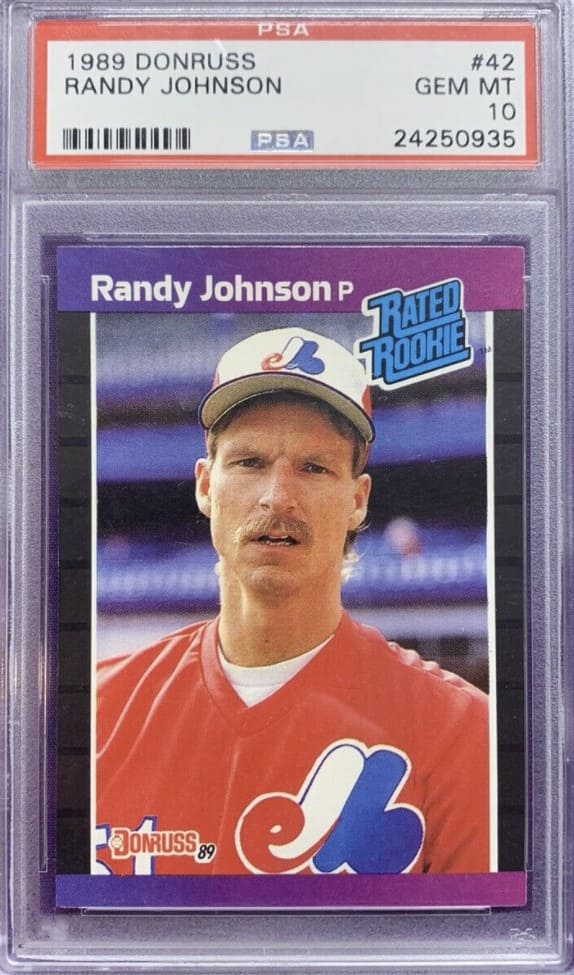 By 1989, Donruss was just becoming an established brand when it comes to baseball cards. It only started producing them in 1981, but the popularity of the brand rose quite quickly, especially with the start of the Junk Wax era.

These cards stilled donned the famous “Rated Rookie” tag which we still see on modern cards, so that’s an interesting feature that has been kept to this very day.

Now, the design of this card might not be everyone’s cup of tea.

The colors on the bottom and top are not very well suited to the black sides, and the image itself is also perhaps not the best.

However, these features also give this card a special feel.

It’s different from the rest and it has something unique about it. While it might not reach the same values as Topps or Topps Tiffany cards, in particular, it can still sell well because there’s a lot of interest in this card nowadays. 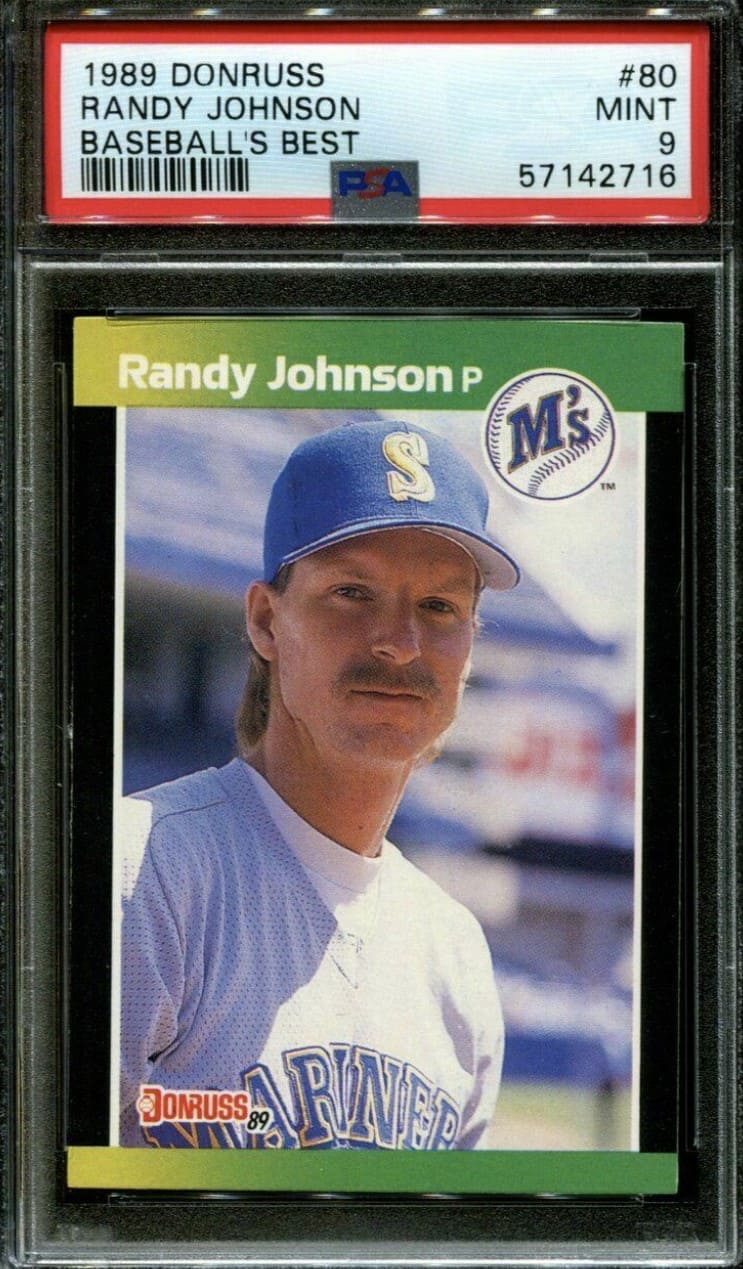 Even though this card is not as popular as the base Donruss card, we believe it’s at least worth a mention on this list, since many people tend to be interested in it.

The Donruss Baseball’s Best Randy Johnson card is a part of an additional release from Donruss that came after the main set. It’s not as valuable as the base card, as this card can be bought for less than $50 in the best conditions.

It’s very similar to the base Donruss card in terms of design, only that it uses a green color instead of purple. Also, the image is slightly different as well.

So it would be a nice addition to your collection, but it’s not the best of cards to try and use an investment. 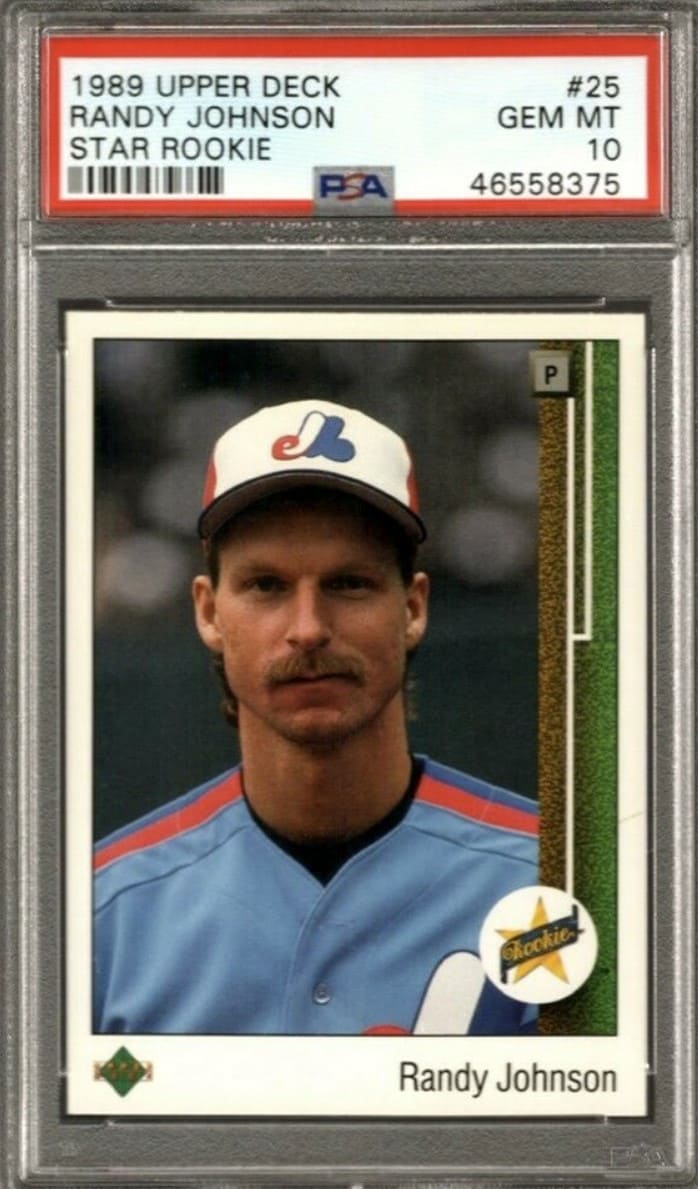 The Upper Deck baseball set from 1989 was one of the most popular card sets of that era. It contained some great players including Randy Johnson and Ken Griffey Jr.

Also, these cards seemed to be of a slightly higher quality than their competitors, which eventually drove people towards these cards instead of the other Randy Johnson rookie cards.

And it also seems as though the prices for this card can get slightly higher than the rest, which is mainly thanks to the higher quality. It’s perhaps slightly surprising though, given the fact that this card was available in huge numbers.

If you’re looking for a great, high-quality option, then this might be your best pick. It’s right up there with Tiffany cards when it comes to quality, although the prices are likely to be quite similar. 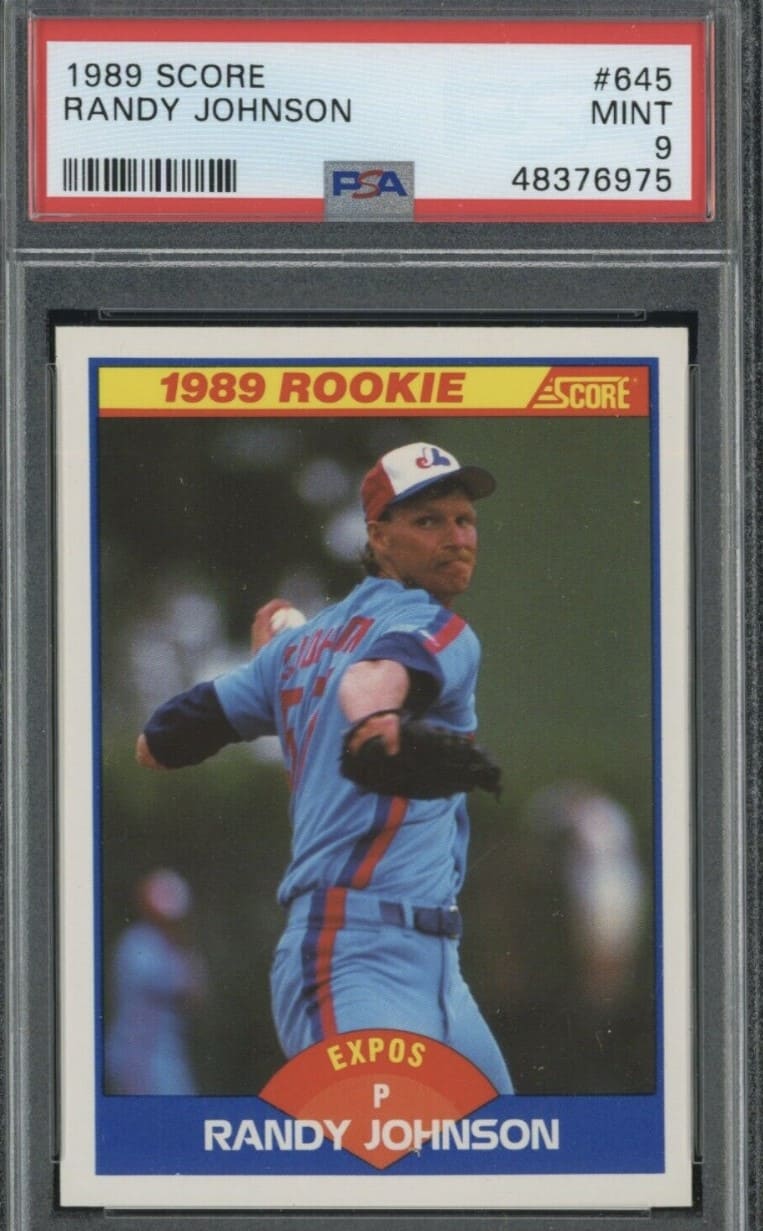 Score is certainly among the most prominent card companies of the early 90s and late 80s. There were several sets of Score cards that were released for Randy Johnson, although this was the base card, and the one that most collectors looked towards.

One of the outstanding features of this card is the image. It shows Randy Johnson in all his power, trying to throw the ball at the opponent – it certainly was a scary sight for the opponents.

Score cards were known for their design choice, and you can instantly tell that this card was produced by the same company that created some of the greatest ever cards.

This base card will not be that hard to obtain, even in the highest qualities, which is mainly thanks to a huge print run.

In addition, there are several other types of cards that were created by Score. Among the most popular are Score Rising Star, and Score Rookie Traded. 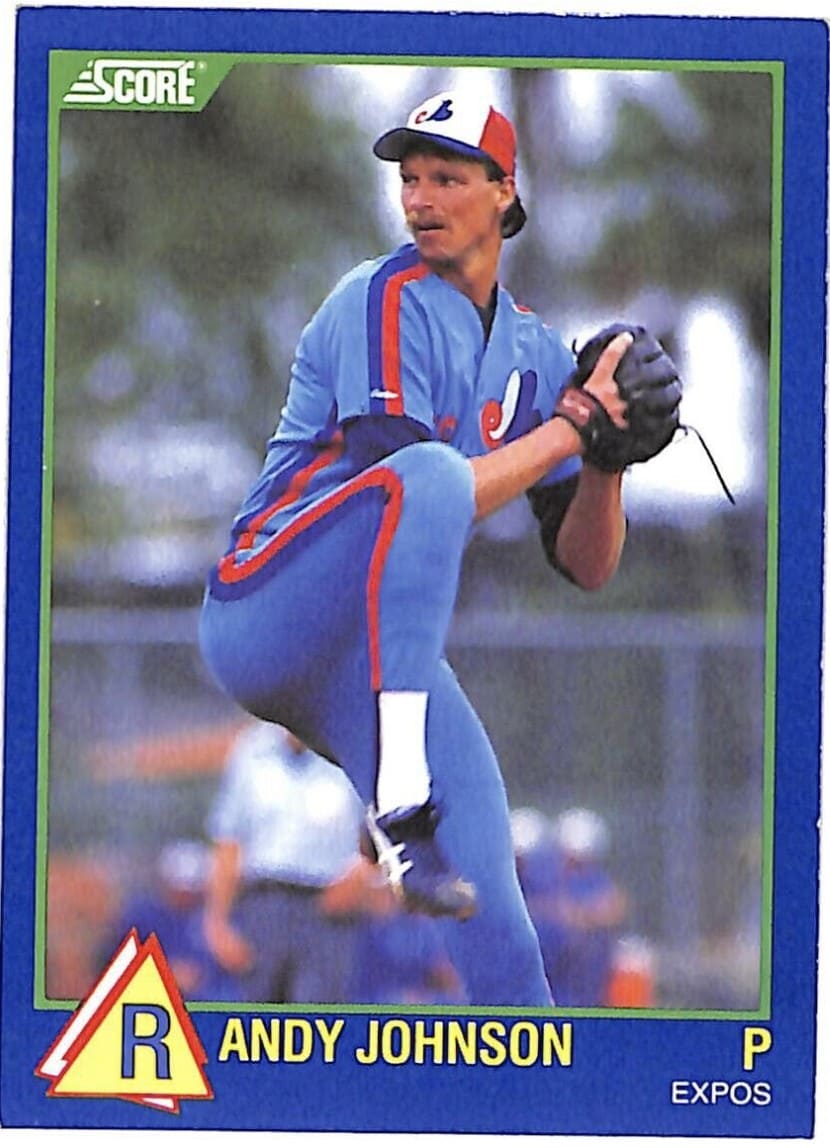 And the Score Traded: 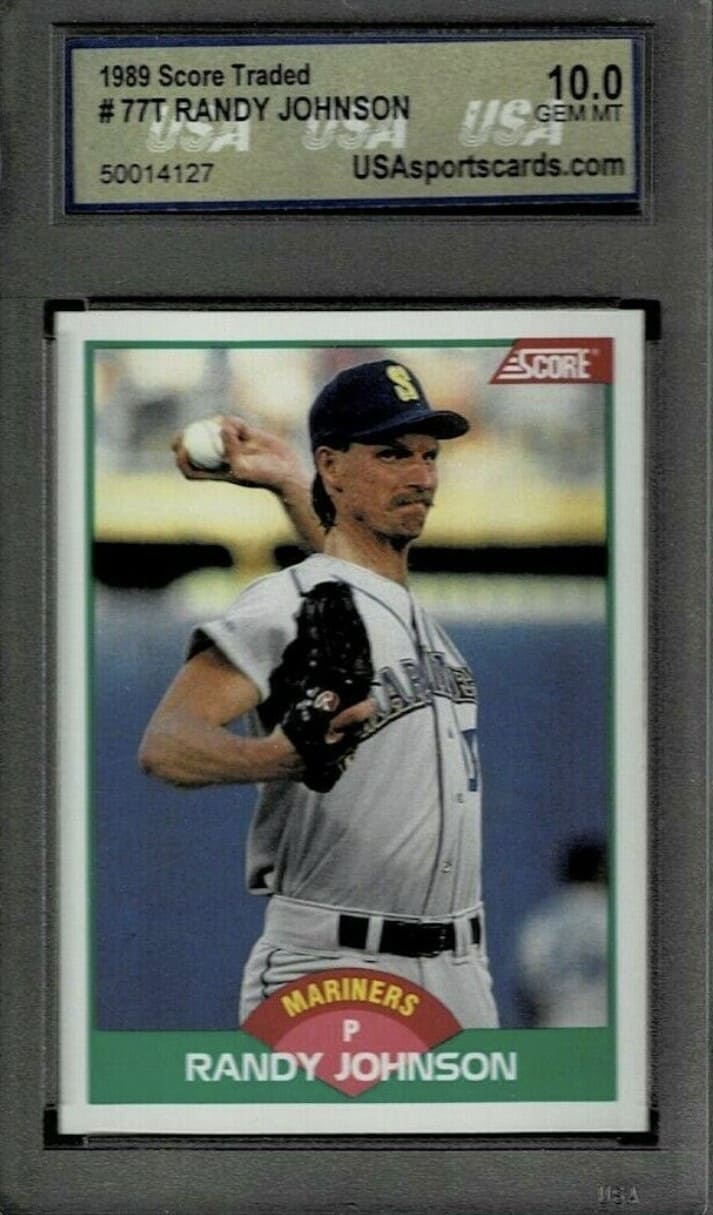 Note that these cards belonged to different sets, so you might see slightly different prices between these three cards. 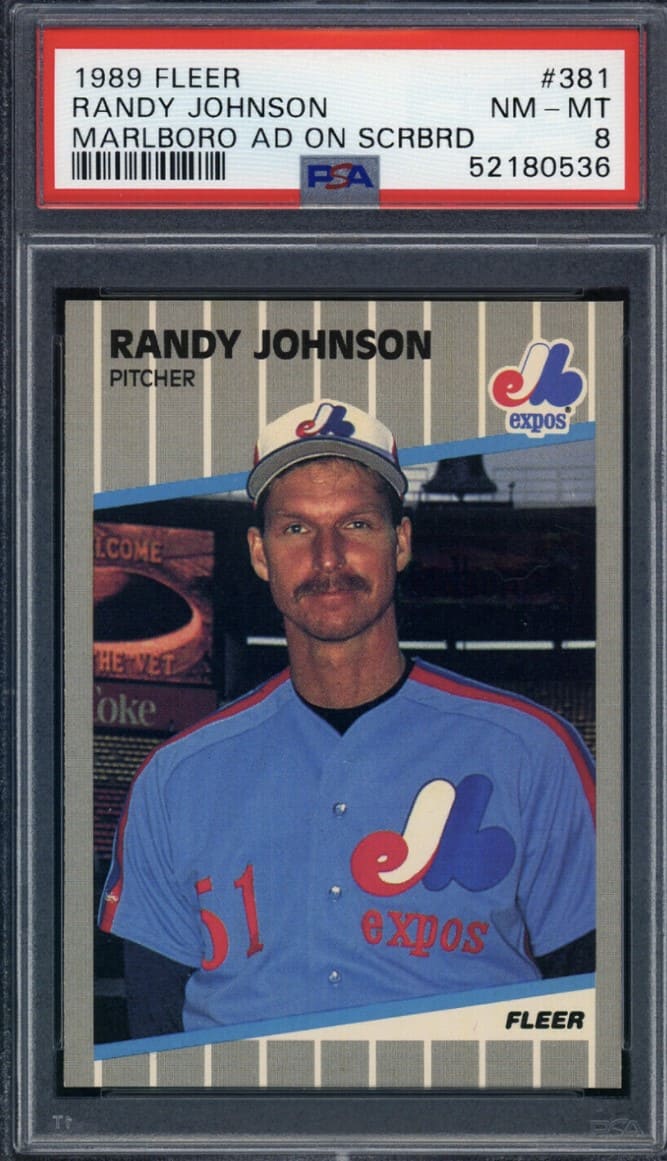 Next up is one of the most controversial baseball cards, maybe ever.

The 1980s were a very different time from today. It was the time when cigarette ads were still common and something completely normal, even during sporting events.

This can be seen in the background of this card (over Johnson’s left shoulder) on the scoreboard, where a Marlboro ad sits proudly. Imagine that happening today, and imagine the backlash?!

Even back then when cigarettes were more universally accepted, this card was a bit controversial.

That’s why Fleer also released the same card, just with the ad completely blacked out so it wasn’t visible: 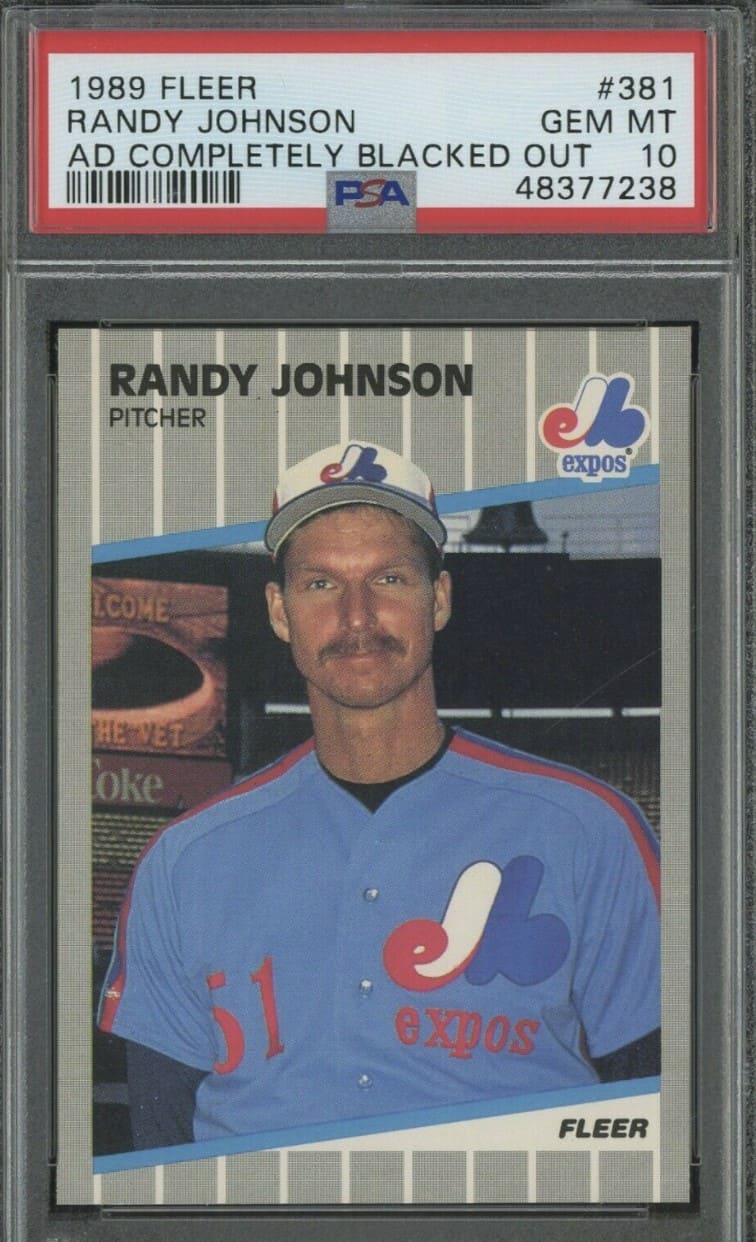 There’s no doubt that this Fleer card is one of the most controversial Randy Johnson rookie cards, which is why it also remains to be one of the more expensive ones.

You might be able to find several of these cards in top grades, although you might need to spend several hundred bucks to get it if you can find it in such condition.

There’s also the Fleer Glossy version of this card, which is the equivalent of Topps Tiffany cards: 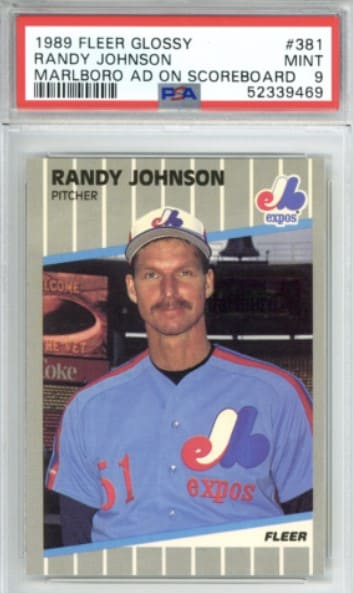 It was basically a higher quality card made from better materials and more vivid colors, which you might be able to spot from the image, but more likely, you’d only be able to tell the difference if you were to compare the two directly. 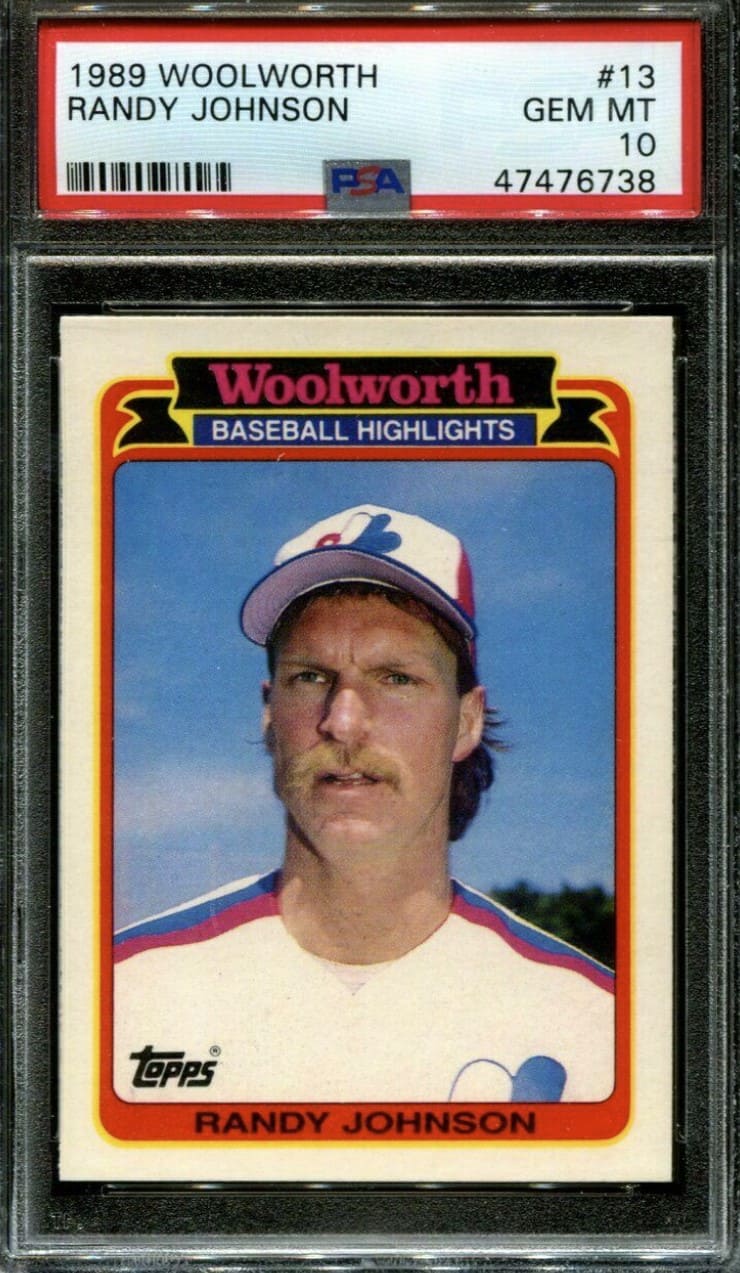 For younger or modern card collectors, the brand name of Woolworth might not ring a bell, but for those who collected cards back in the 80s, it might be an interesting proposition to consider.

This card was created and printed by Topps and it was meant to be sold exclusively in Woolworth retail stores, which does make it a bit unique.

The card was a part of a 33-card set that also contained some high-profile cards like Don Mattingly. It was also a high-quality set which may or may not be visible from the image above, but the card stock was quite good. 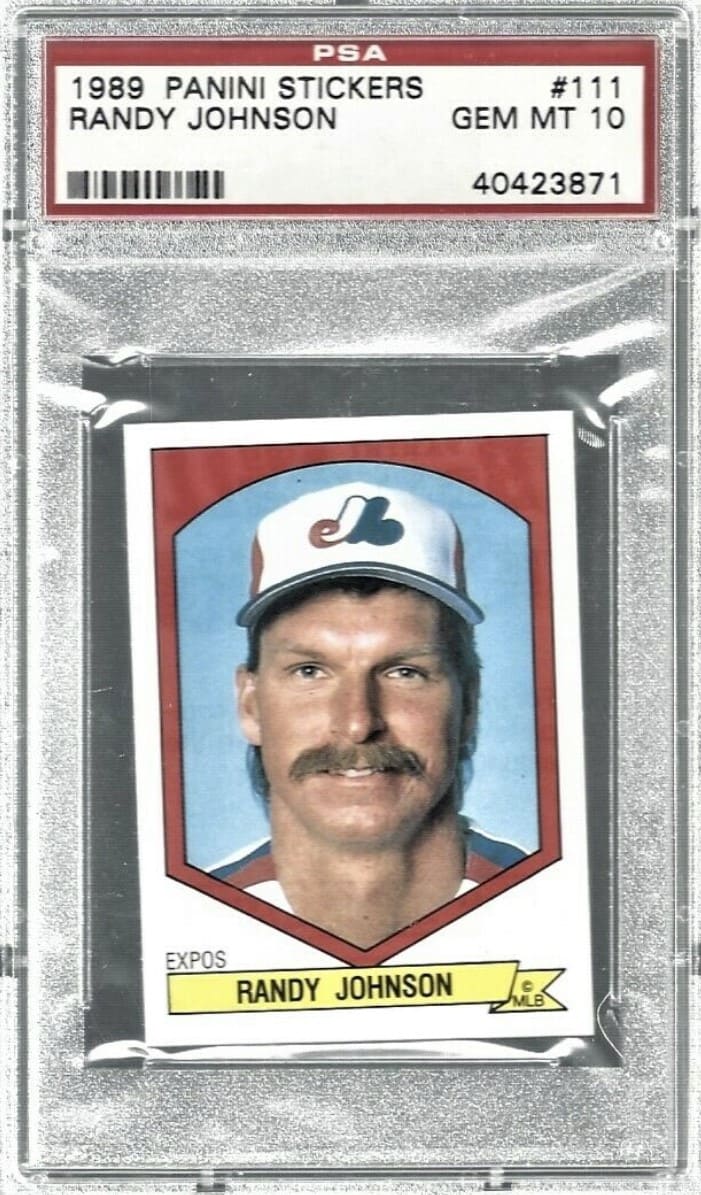 Now if you’re here only for the Randy Johnson cards, then you might as well skip this one. But if you sometimes like to dwell on stickers as well, this might be a good opportunity for you.

Randy Johnson’s Panini sticker was one of the hottest stickers on the market once this set came out.

The main problem with stickers, as always, is the availability and the conditioning. Finding a sticker like this above in the image graded as a PSA 10 is a true rarity. People used stickers in their albums, and the rare few that didn’t may have lost their stickers or didn’t maintain them properly.

This leads to many stickers like this being graded very poorly.

However, the ones that are graded highly like the one you see in the image can collect significantly higher prices than some of the cards we’ve mentioned here in this article.

So maybe you’re one of the lucky few that has one of these stickers lying around in your garage – what to do next?

Your best bet is to get it graded, especially if you feel like it’s in great shape. Who knows, with some luck, you might be looking at a sticker with great selling potential and huge value. 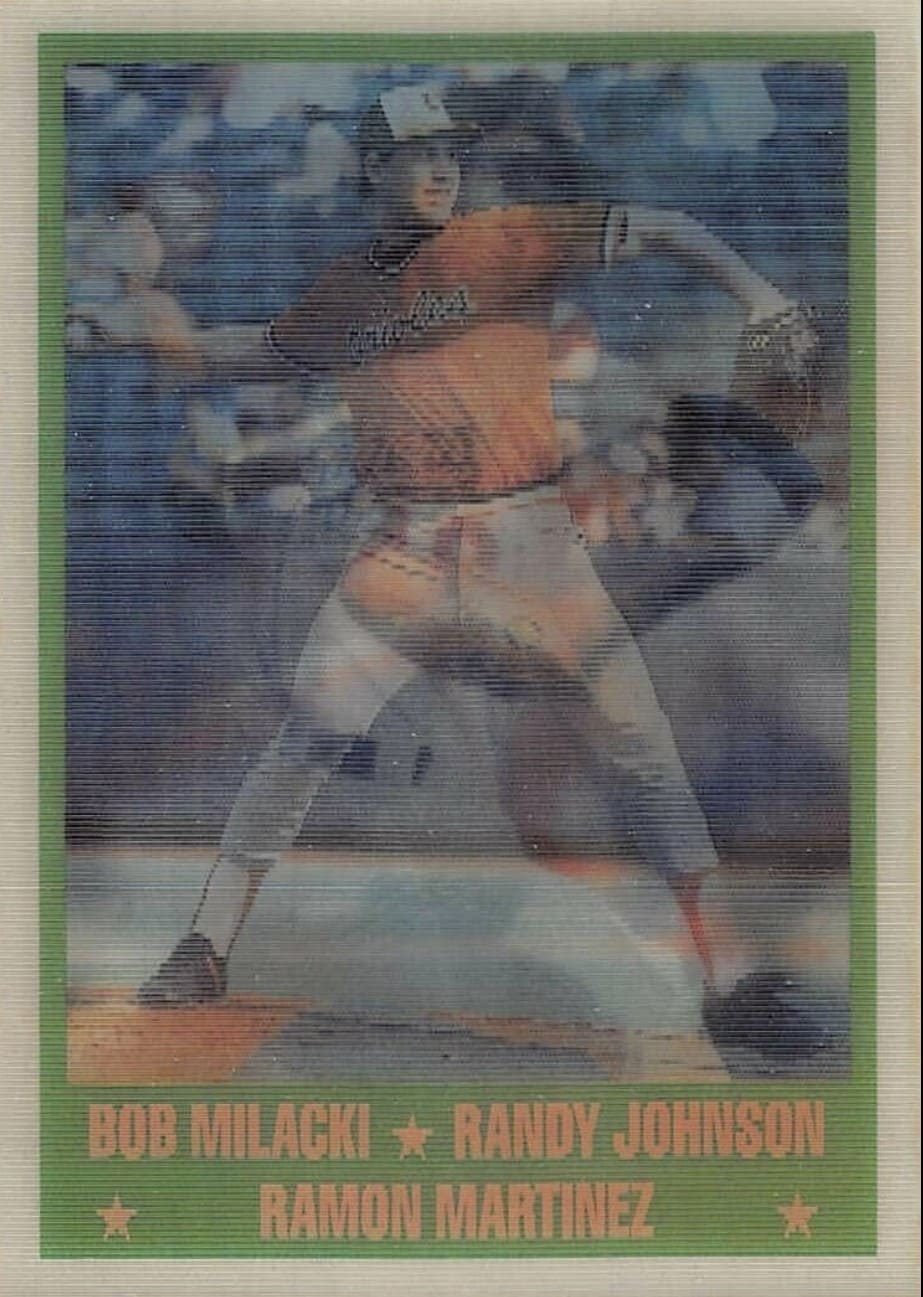 Another interesting card that we need to mention is the Sportflics card that comes from 1989.

Back then, there was not much variety with baseball cards. You had your base cards and the Tiffany/Glossy versions, which were cards of a slightly higher quality or print run.

And then you had glossy cards like this Sportflics card. This is one of those cards that changes the image on the card based on the angle you look at it from.

On the other hand, this card can be gotten for quite cheap so it might be just an interesting addition to your collection, especially if you admire how good Randy Johnson was.