Pedro Martinez made his debut in the MLB in 1992. In his 18 year career in the league, he made his name as one of the most feared pitchers in history.

Initially, due to his relatively small stature as a pitcher, many people were skeptical.

However, Pedro Martinez soon proved everyone wrong. He became one of the pivotal members of the Red Sox team that managed to win a World Championship for the first time in 86 years.

This is also one of the main reasons why Pedro Martinez rookie cards are still so popular.

If you’re looking for a good Pedro Martinez rookie card, then you’ve only got one true rookie option. Take a look below to see what card that is.

As I’ve already mentioned, there is only one recognized true rookie card, but you’ve also got some other cards that some people might see as rookie cards. 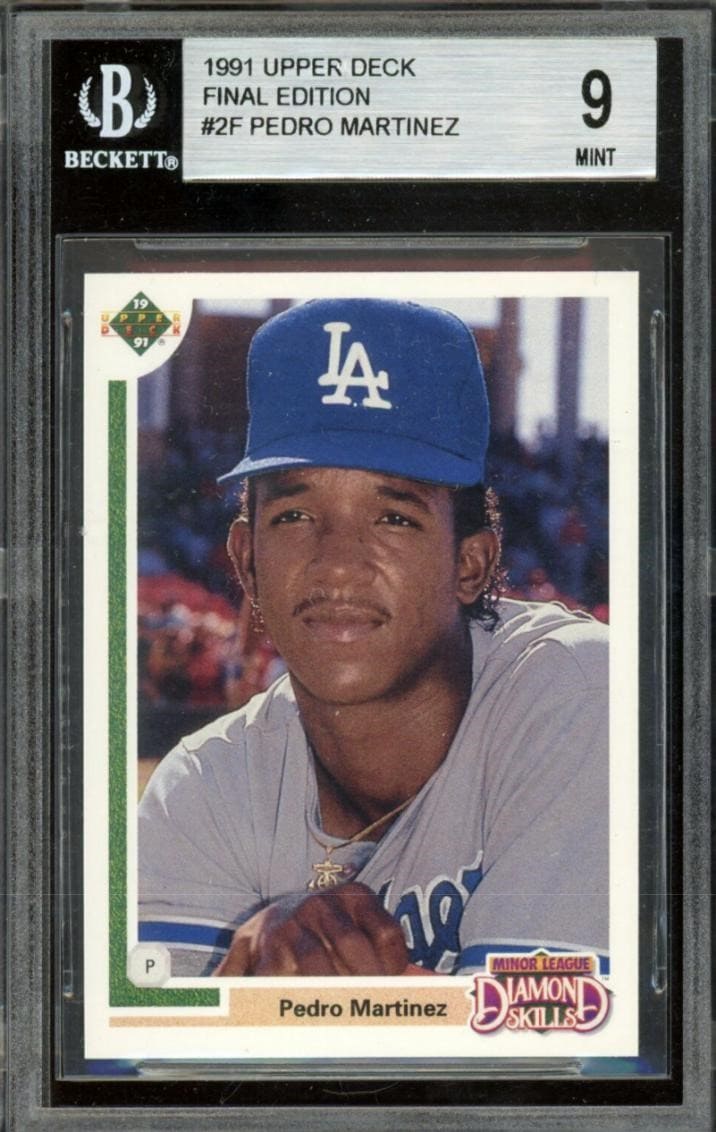 To be fair, this isn’t one of the most expensive cards in the world. Even though it’s the only official rookie card, it is going to be easy to find and relatively cheap.

It’s just a shame that not more card companies realized the potential of Pedro Martinez. This is one of the main reasons why this is the only Martinez rookie card out there.

Even this set was released very late in the season. The Final Edition cards were the last cards from the set of Upper Deck cards for the 1991 season, which also happened to include Martinez.

Martinez officially debuted in 1992, but he was already included in the Dodgers team earlier in 1991, even though he didn’t manage to officially record an appearance for the team from LA.

Despite this being the only Martinez rookie card, it is still quite cheap to get.

The main reason for this is the huge print run of cards that was so typical for card companies in the late 1980s and early 1990s. 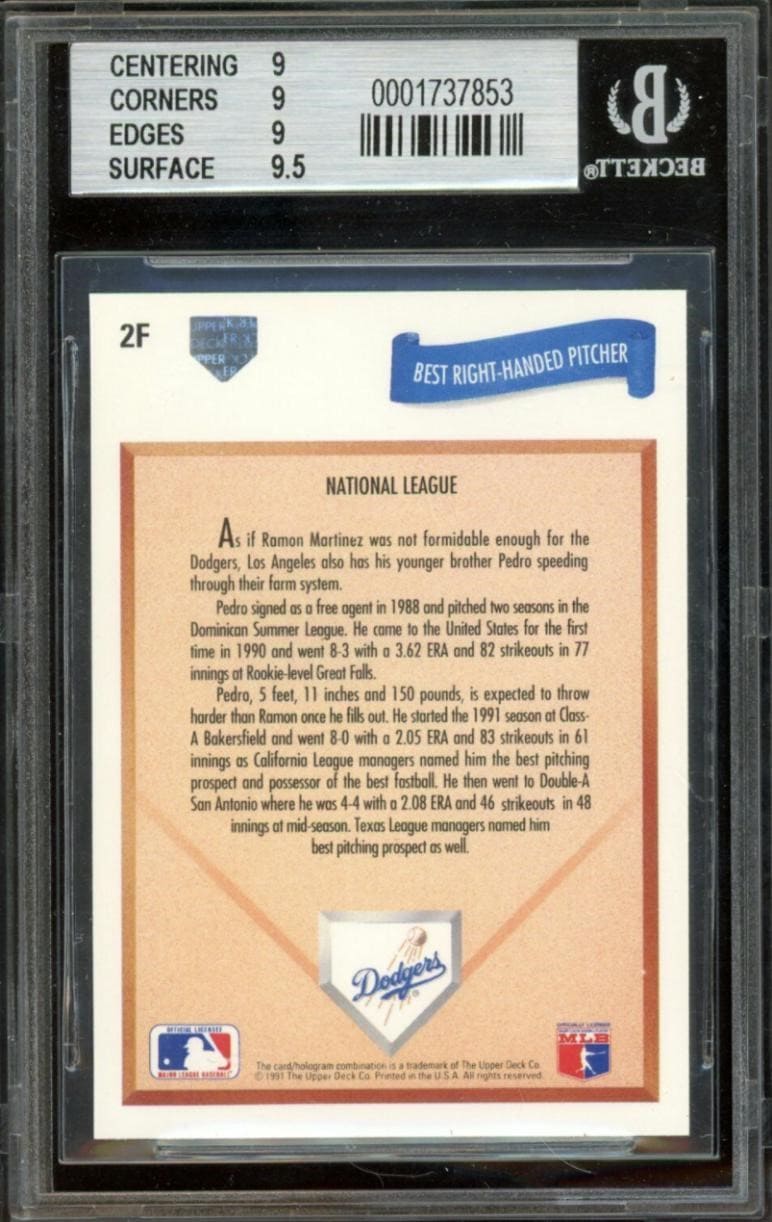 It’s easy to find, inexpensive, and you’re going to be able to get one in great condition, as well. 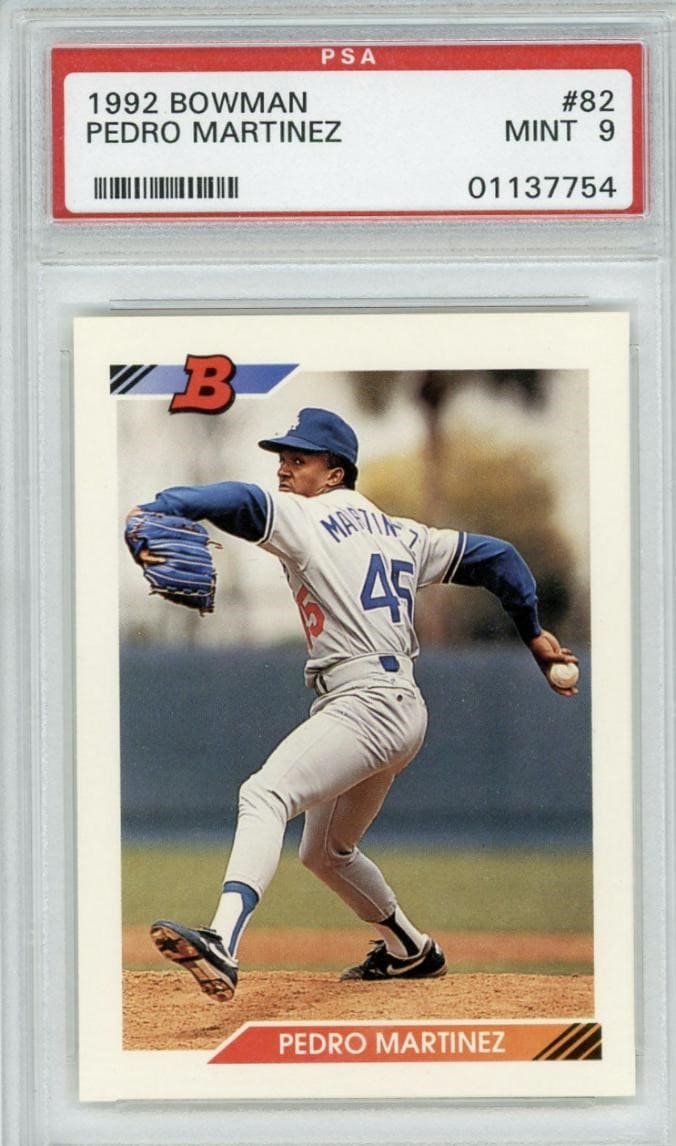 Now, I’ve talked about how the Upper Deck card is seen as the rookie card officially, but many people also see this Bowman card as his rookie card.

Remember, Martinez made his debut in 1992, which led some people to believe that the Bowman card is also to be branded as a rookie card.

The failure to include Martinez in the 1991 Bowman set means that the 1992 card was considered to be his rookie card. And because of the popularity of the Bowman brand with baseball fans, it became even more highly sought-after than the Upper Deck one.

This is a bit of a rarity, to see the rookie card get beaten for popularity by a later card, but that’s exactly what happened here.

But even though the Bowman card was so popular, it never reached the heights of card values that some other cards have. Again, it’s the high print numbers at fault for this.

Even the best-graded cards will usually not exceed the value of a few hundred dollars, so even if you’re on a budget, this card can be a great option for you. 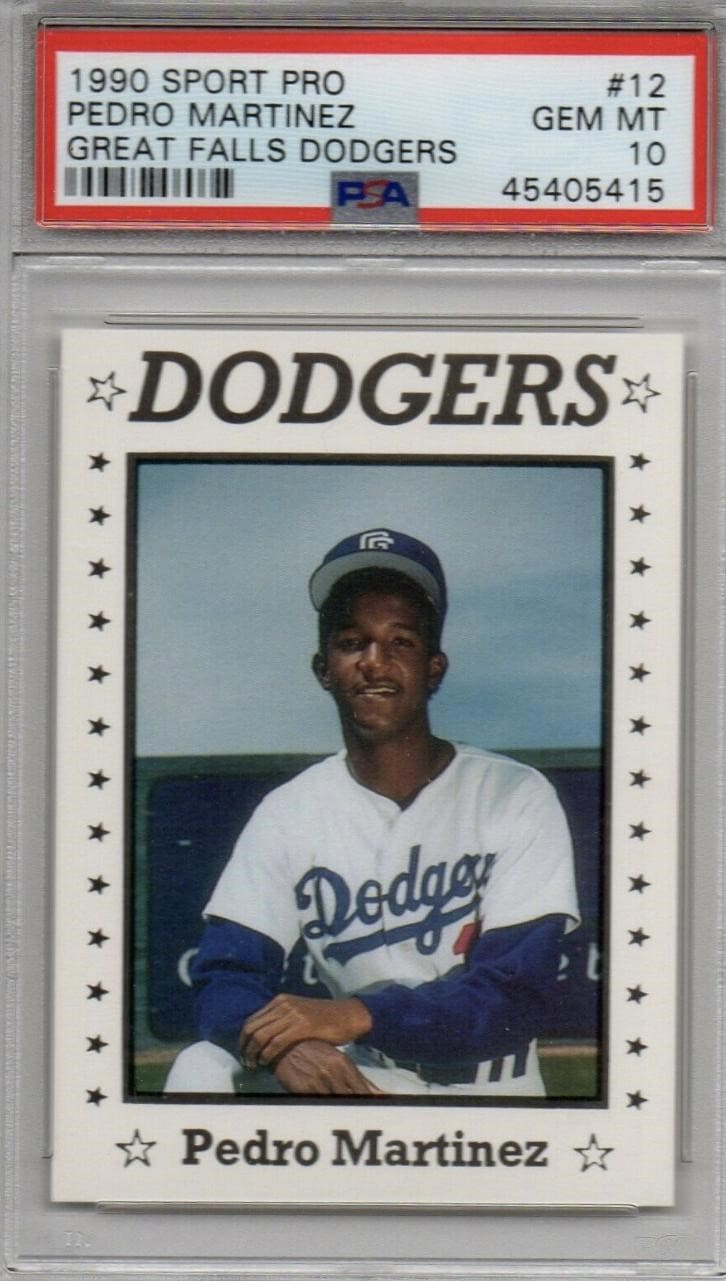 This is yet another card that needs a mention as a rookie card because many people see it as his rookie card.

This card comes from a lesser-known card company called Sport Pro, and this is from a set that focused on Great Falls Dodgers players. Martinez’s card was #12 in the set.

All this means that the prices for this card can exceed the prices of the other two cards we’ve just mentioned, but not by a lot. Even the best-graded cards will not cost you more than a few hundred dollars.

It’s a great option if you’re looking to add to your Pedro Martinez collection and if you prefer to have something a bit more valuable than the other two cards we’ve just mentioned.

This exhausts the rookie card options, but there are many more cards that come from an early part of Martinez’s career that we might need to mention.

Note that these cards are not true Pedro Martinez rookie cards, but just cards from an early part of his career, or even from his college days. 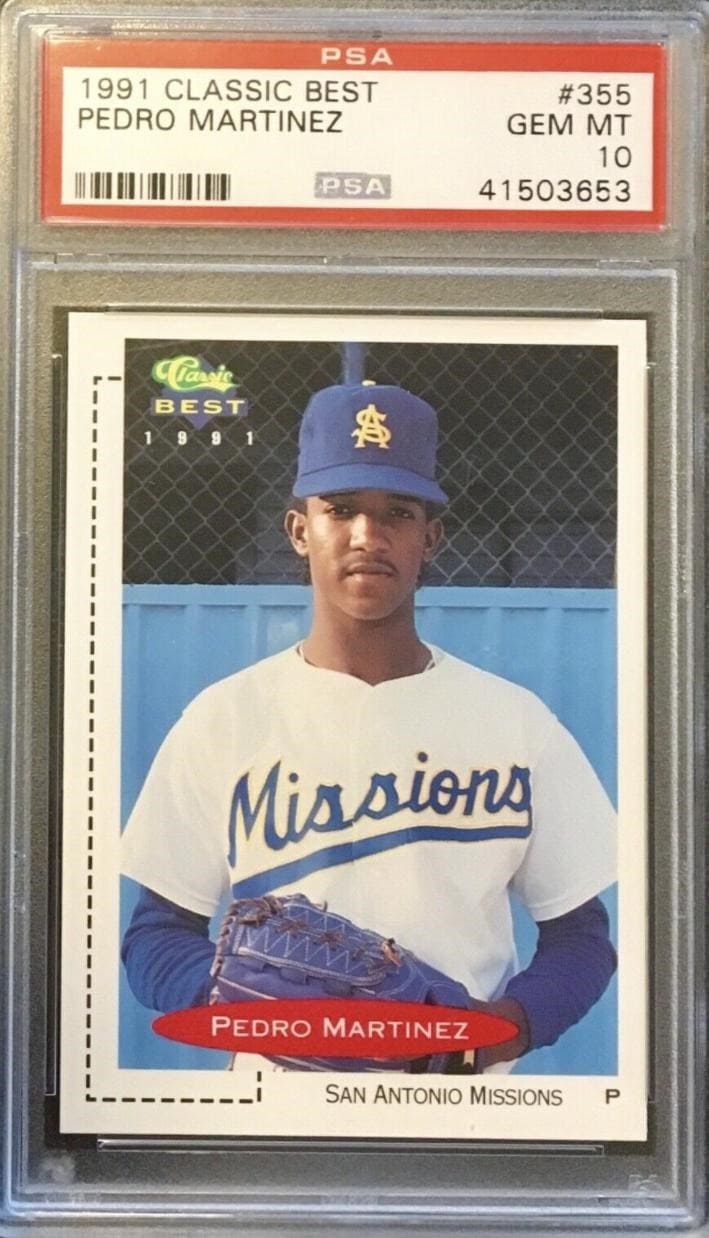 This card is perhaps the most interesting pre-rookie card of Pedro Martinez.

Pedro spent some of his pre-rookie years with the San Antonio Missions, where he was plying his trade to play in the MLB.

Before he played for the Great Falls Dodgers, Pedro Martinez was spending his time with the SA Missions. This was in early 1991 when he was still considered to be a good talent, but perhaps not one of the best talents to come through in the next few years.

Now, if you don’t like pre-rookie cards, then you’re going to have to avoid this one.

But if you’re looking to expand your Pedro Martinez collection, this card could be a nice option for you. A big advantage of this card is that it’s not very expensive, as you might be able to get one for less than what some rookie cards are worth. 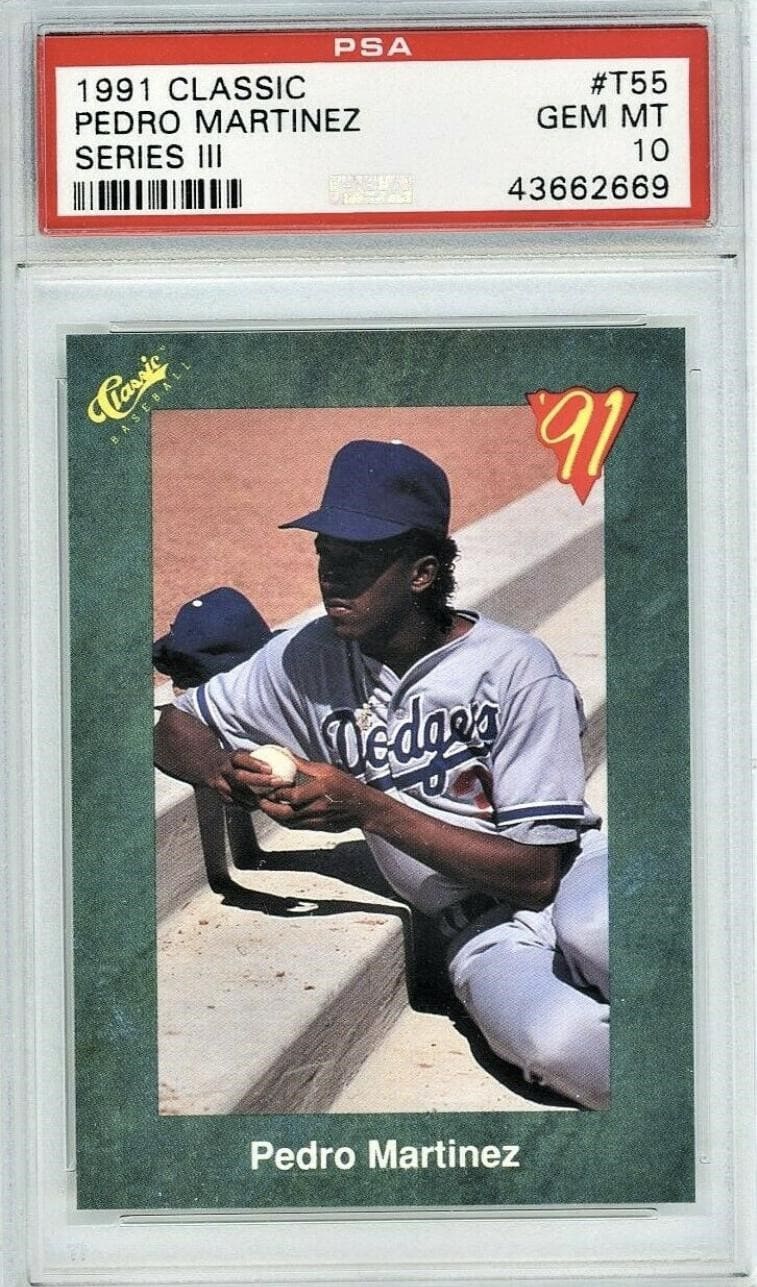 The next card that needs a mention is the Classic Series III card. On this one, Martinez is also portrayed as a Great Falls Dodgers player, just in a different pose.

This card is a bit more difficult to come by than the Classic #355 card because it’s a bit rarer. But because the demand is not great for this card, it’s not very expensive anyway, so you might be able to get both.

The differences between the two cards are minor; you might be able to notice that the border is green here, and the image of Martinez is also different.

If you’re simply looking to expand your Pedro Martinez collection, then you should check this card out because it’s not very expensive to get, and it’s a good option if you don’t like to overspend as well. 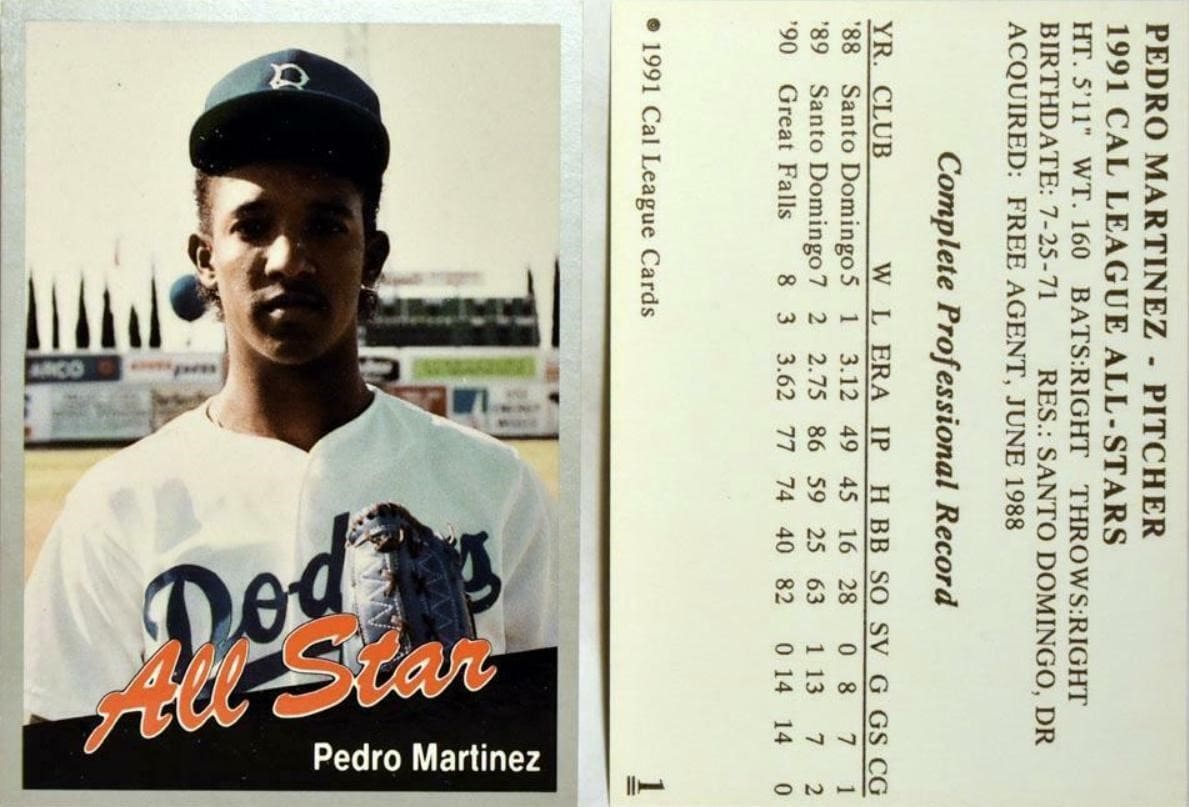 This is just another option that you can consider. It’s worth mentioning since Martinez was participating in the All-Star competition for the Cal League, which was the minor league that he competed in.

On the card, you’ll find an image of a young Pedro Martinez, along with his stats for the Great Falls and Santo Domingo.

These just show you how good Martinez was already in the minor leagues before he officially entered the Major League.

You should be able to find this card for very cheap, and it’s a decent option if you want to add something extra to your collection. 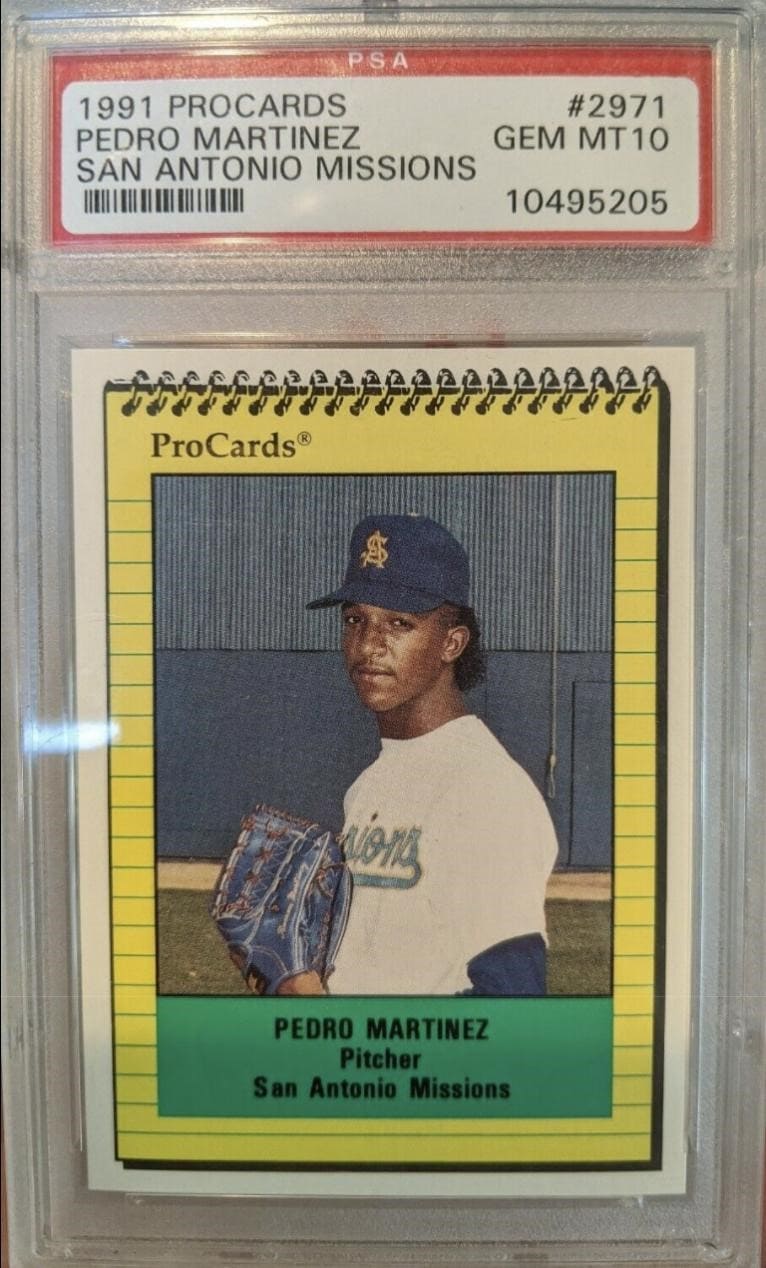 The next card is an interesting one.

You might recognize the design of the ProCards sets from the early 1990s. They featured that typical notebook look that you might already have seen with some other cards.

This card comes from Martinez’s days with the San Antonio Missions in the Minor League.

There are still many of these out there, and with some luck, you might be able to get one that’s still preserved well for a decent price. Overall, these shouldn’t be more expensive than other pre-rookie cards, even though they can be quite rare.

Again, if you don’t like pre-rookie cards or cards that don’t feature this player in the official Dodgers apparel, then you might want to look elsewhere. 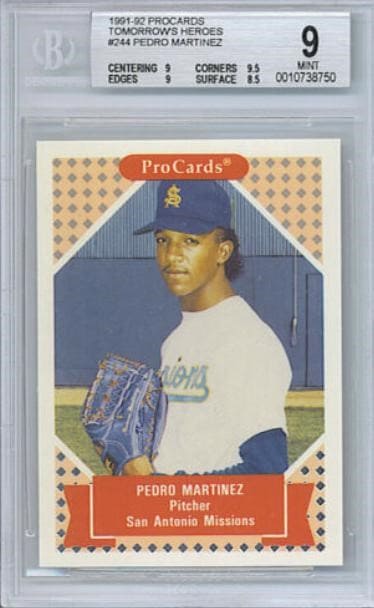 The last card we’ll take a look at is the ProCards Tomorrow’s Heroes card of Pedro Martinez.

Like the previous card, this also comes from ProCards, just from a different set.

Tomorrow’s Heroes featured some of the most talented players for the future, so they also decided to include Pedro Martinez who at the time, was seen as a good prospect.

You will be able to get this card for relatively cheap if you decide to get it, although it’s a bit harder to find than the other ProCards card.

Find other Cards on eBay